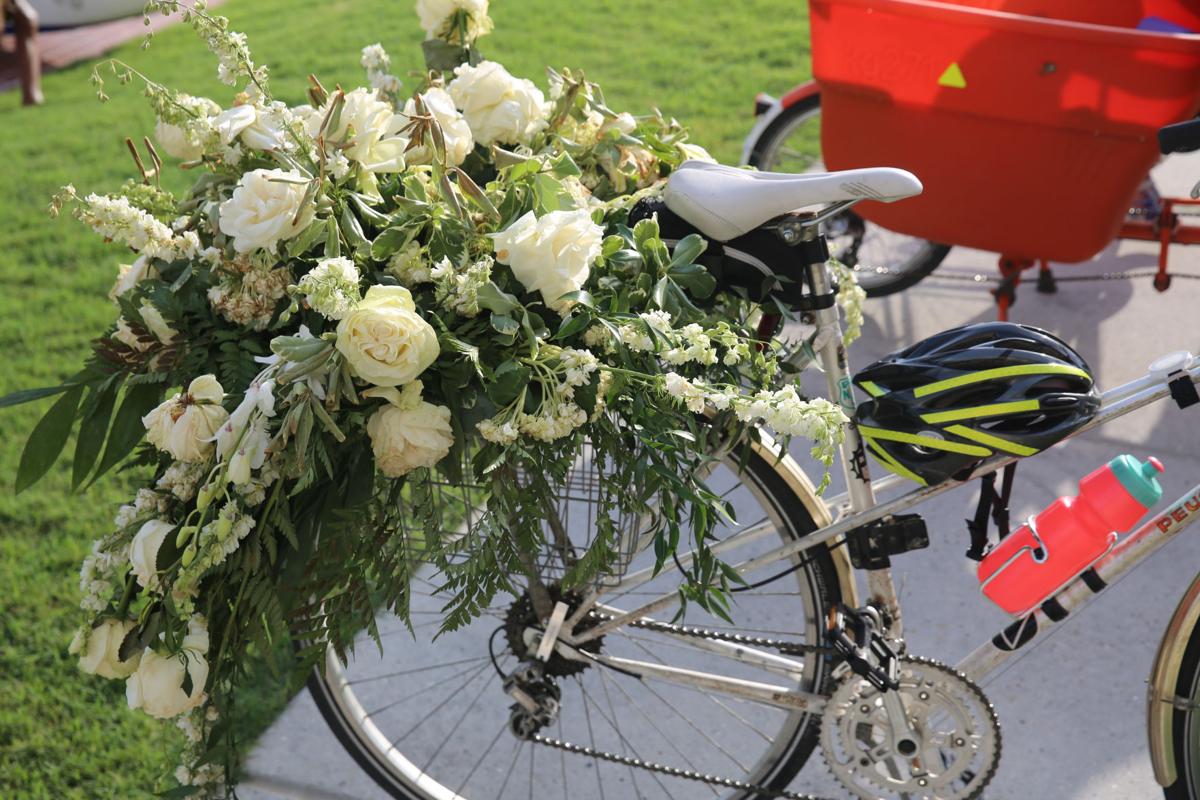 A white floral arrangement sits on the back of a bike during the Buddy Amoroso bike ride memorial held in Baton Rouge on Sunday evening, July 1, 2018. 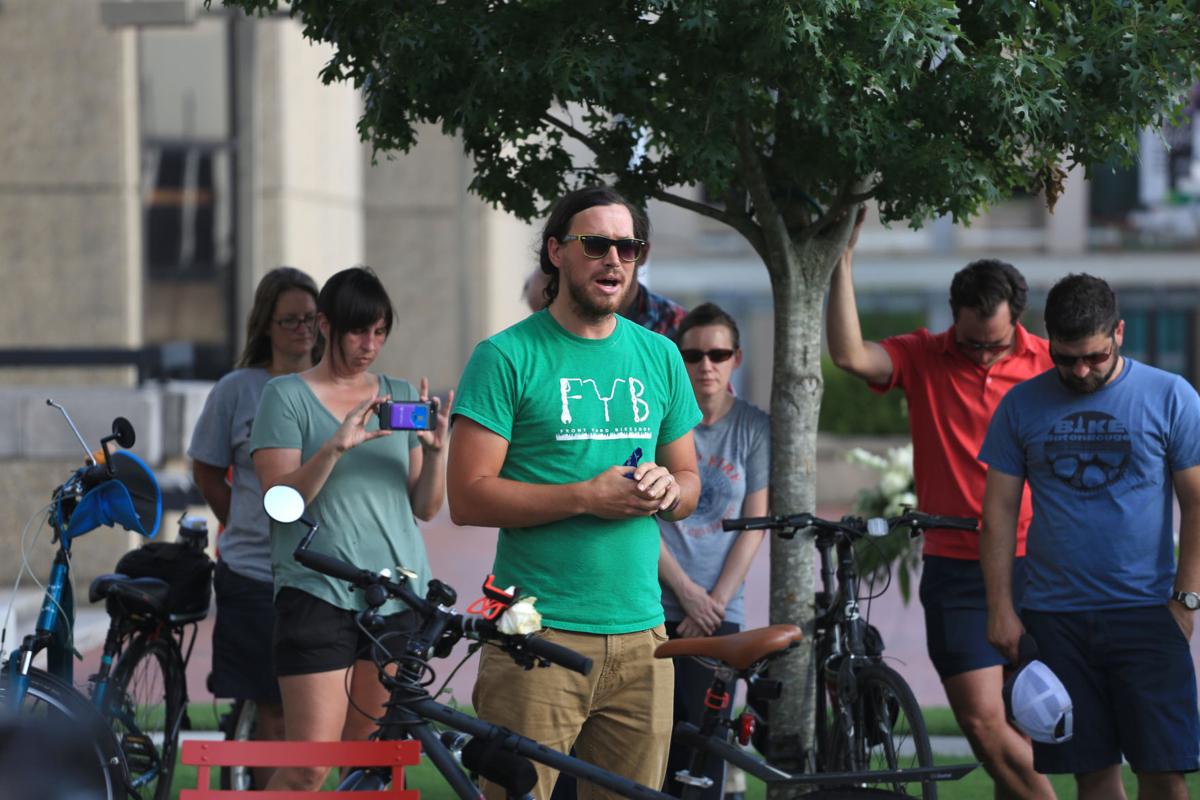 Dustin Lafont of Front Yard Bikes shares some words with attendees of the memorial bike ride for Buddy Amoroso held at North Blvd. Square in Baton Rouge on Sunday, July 1,2018. 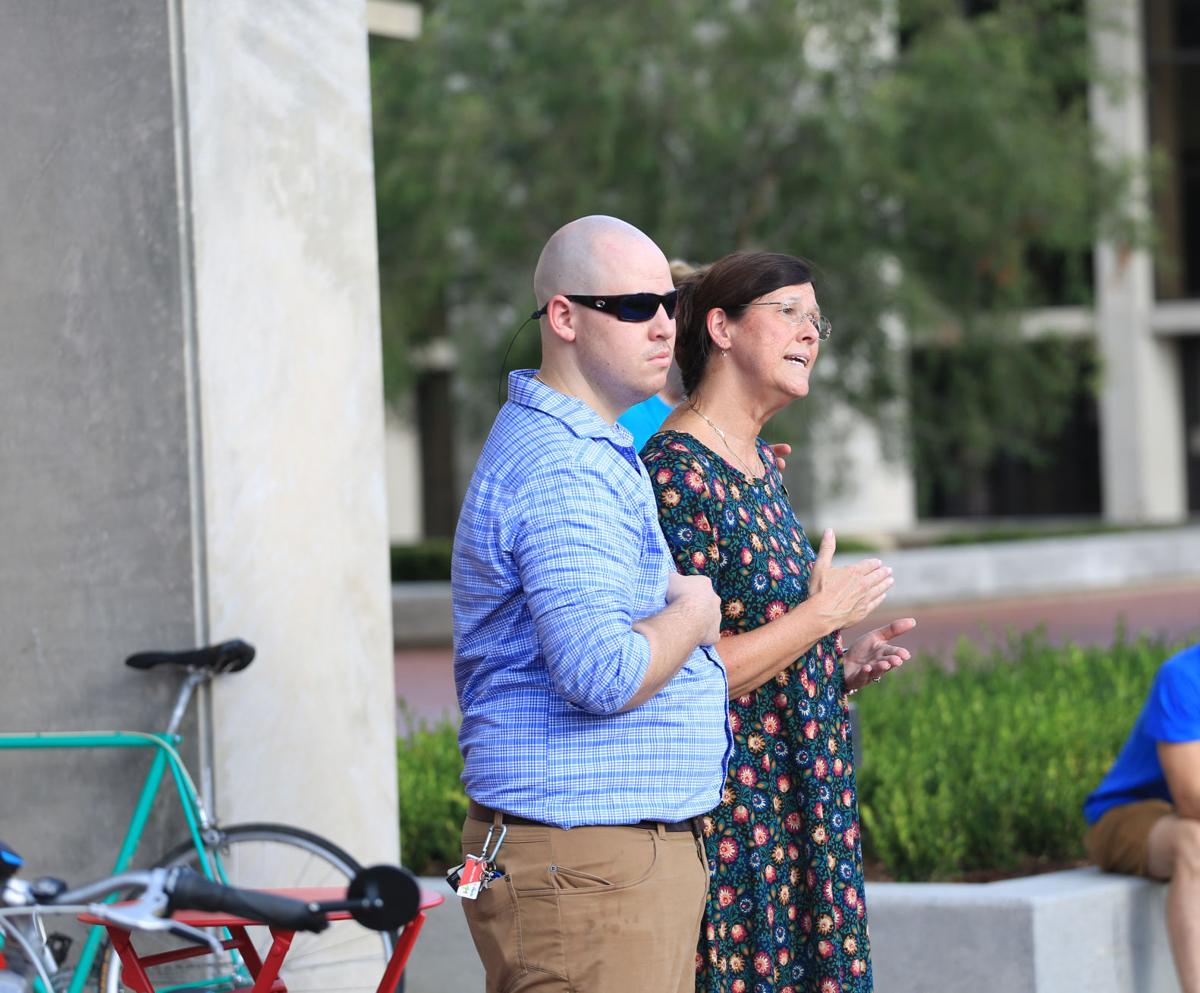 Denise and Joey Amoroso, son and wife of the Buddy Amoroso share some words with the memorial bike ride attendees on Sunday in downtown Baton Rouge on July 1,2018.

A white floral arrangement sits on the back of a bike during the Buddy Amoroso bike ride memorial held in Baton Rouge on Sunday evening, July 1, 2018.

Dustin Lafont of Front Yard Bikes shares some words with attendees of the memorial bike ride for Buddy Amoroso held at North Blvd. Square in Baton Rouge on Sunday, July 1,2018.

Denise and Joey Amoroso, son and wife of the Buddy Amoroso share some words with the memorial bike ride attendees on Sunday in downtown Baton Rouge on July 1,2018.

As more than 75 bicyclists and 25 pedestrians gathered Sunday evening in downtown Baton Rouge in memory of the late East Baton Rouge Councilman Anthony "Buddy" Amoroso IV, his widow, Denise Amoroso, pleaded with them to stay safe.

"Please be careful," Denise Amoroso said before the bicyclists headed out on a silent memorial ride. Buddy Amoroso died Saturday after he and another cyclist were struck by an SUV in West Feliciana Parish.

"(Buddy's) passion was bike safety and I want you to take some kind of lesson away from this if nothing else to be careful when you're out on the road," Denise Amoroso warned the bicyclists. "There are drivers out there and most of them don't care about you people, they don't see you."

The bicyclists, friends and the Amoroso family gathered down the street from City Hall, where Buddy Amoroso had been serving his second term representing the southeastern part of the parish. During the memorial, many shared stories of Amoroso's passion for Christ, bike riding and the Baton Rouge community.

Bike Baton Rouge President Doug Moore said they wanted to organize a fitting tribute for Amoroso not only because he was an avid cyclist, but also to bring awareness about the dangers on the road.

Amoroso and 71-year-old Thomas Clement were bicycling on La. 66 around 11 a.m. Saturday when 21-year-old Nicholas Alexander, driving an SUV, struck both men from behind, Louisiana State Police said. Clement, of St. Gabriel, was hospitalized with serious injuries. Alexander, of Lafayette, was arrested.

Louisiana State Police said Amoroso and Clement were wearing helmets and riding single file on the side of La. 66, commonly known as Tunica Trace Byway.

Alexander was booked into West Feliciana Parish jail on counts of negligent homicide, negligent injuring and limitations on passing bicycles.

Denise Amoroso reminded the bicyclists not to ride alone, sharing that her husband once had a heart attack on a bike ride, but was luckily to be with another bicyclist who is a doctor.

One woman at Sunday's memorial wore a shirt with the words "ride of silence: wearing this shirt once is once too many," but Moore said they also wanted the ride to bring attention to the fact that Amoroso was not the only bicyclist killed this year.

"Another person died needlessly," Moore said. "(We want to bring attention to) just how dangerous and deadly it is to drive and not pay attention. It can be just as dangerous as going way over the speed limit or drinking and driving, but people do it so nonchalantly."

During the memorial, fellow bike enthusiasts and friends of Amoroso described him as a true public servant and someone who always wanted to improve Baton Rouge.

Dustin Lafont, founder of the community bike shop and mentorship program Front Yard Bikes, met Amoroso at a recent Pedaling for Peace event organized by Councilman LaMont Cole. Lafont said Amoroso came up to him and thanked him before spending time talking with Lafont's high school students about his plans for Baton Rouge and the teens' goals.

"He was down to earth and still serving on his time off," Lafont said. "I really feel like we have a loss as a whole city."

Amoroso bought himself a new cruiser bicycle, with his wife's encouragement, for the Pedaling for Peace event after another one of his bikes was stolen. His new silver cruiser, Denise Amoroso said with a laugh, brought him so much joy and excitement, especially because of the way the brakes worked.

Beyond his passion for cycling and bikes of all kinds, Denise Amoroso stressed how much her husband was guided by his deep faith and the religious teaching to love your neighbor.

"Every day he talked about God's law of loving God and loving your neighbor, and he truly, truly loved his neighbor," Denise Amoroso said. "I was free to pass out his telephone number. How many people do you know that passes out their cellphone number? He took care of everybody and he took care of me and I don't know what I'm going to do."

As her son Joey Amoroso comforted her, Denise Amoroso thanked the crowd for sharing their kind words. Several more people waited to talk with Buddy Amoroso's family to personally tell them their experiences with him.

"You people have no idea what this means to us," Denise Amoroso said. "I keep joking with people that I never knew that I was married to a rock star."

Metro Council to pick temp replacement for Buddy Amoroso, who was killed on bike ride