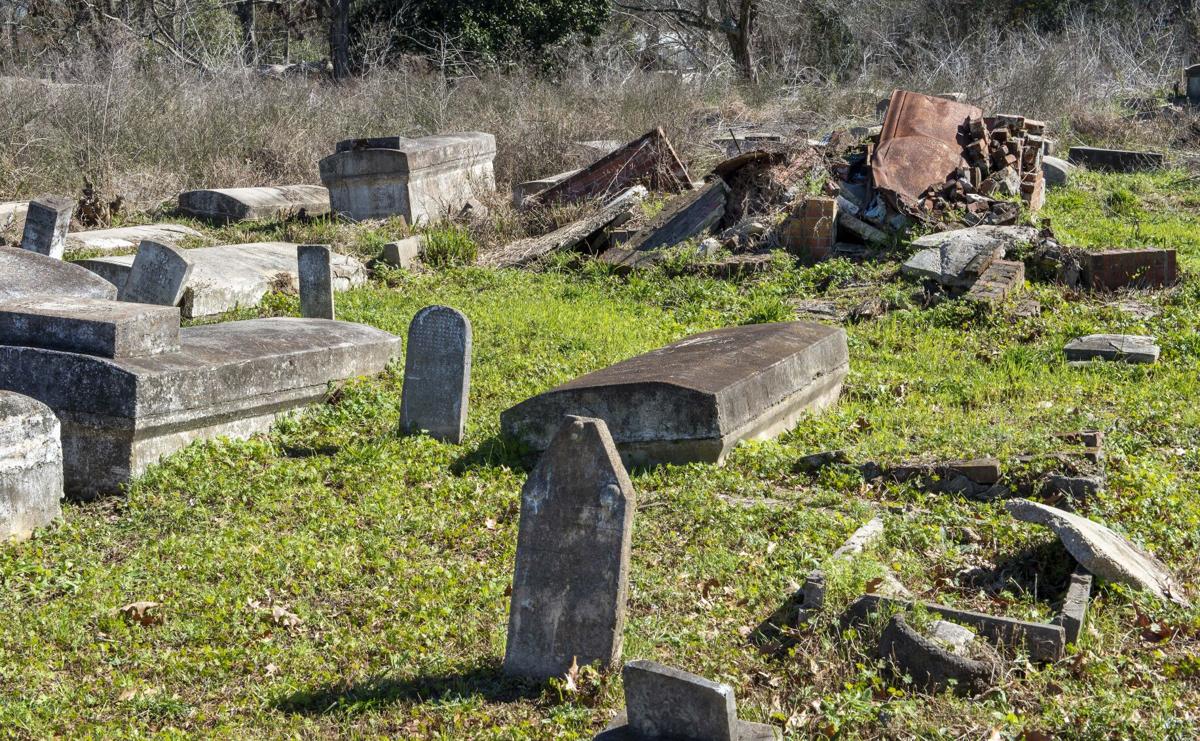 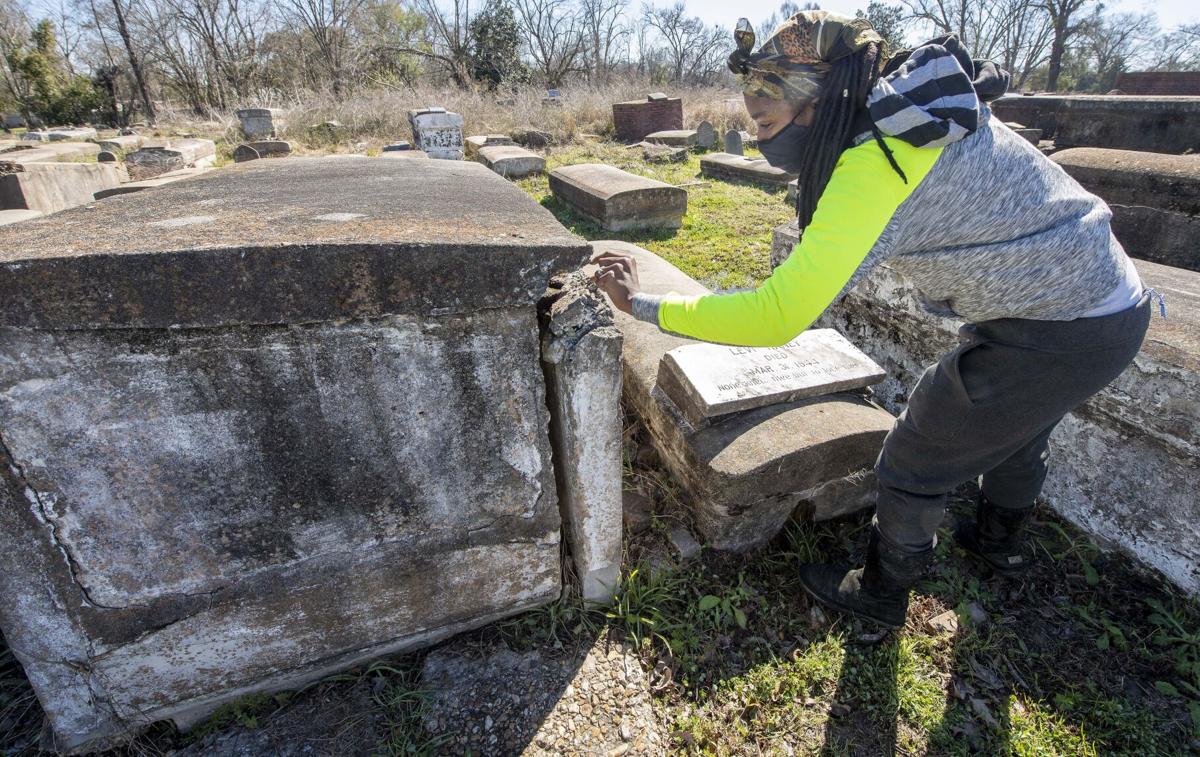 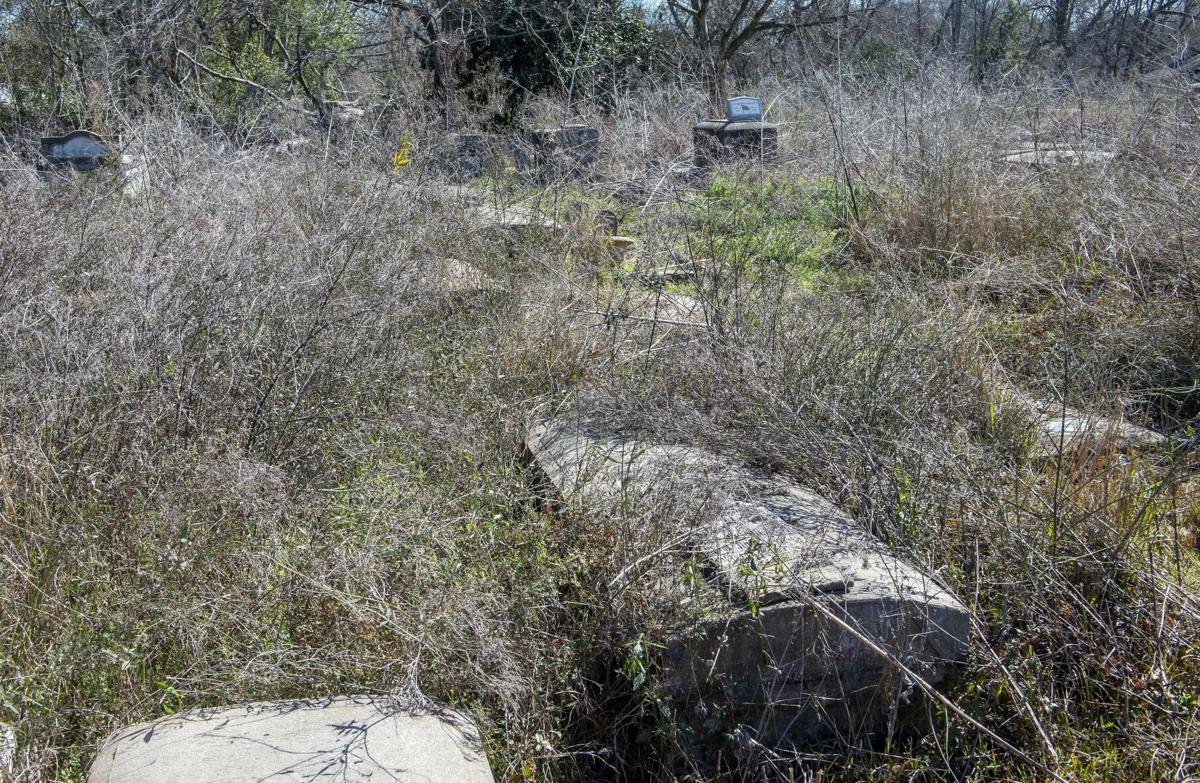 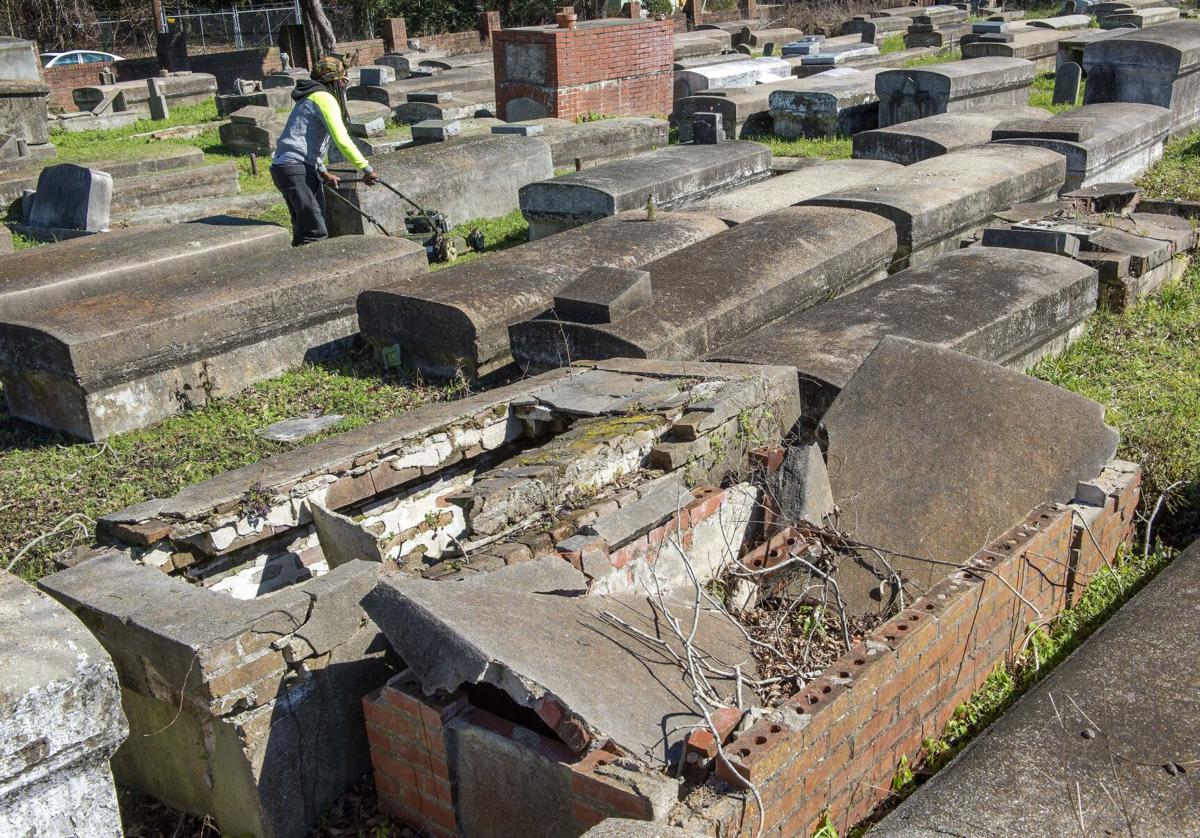 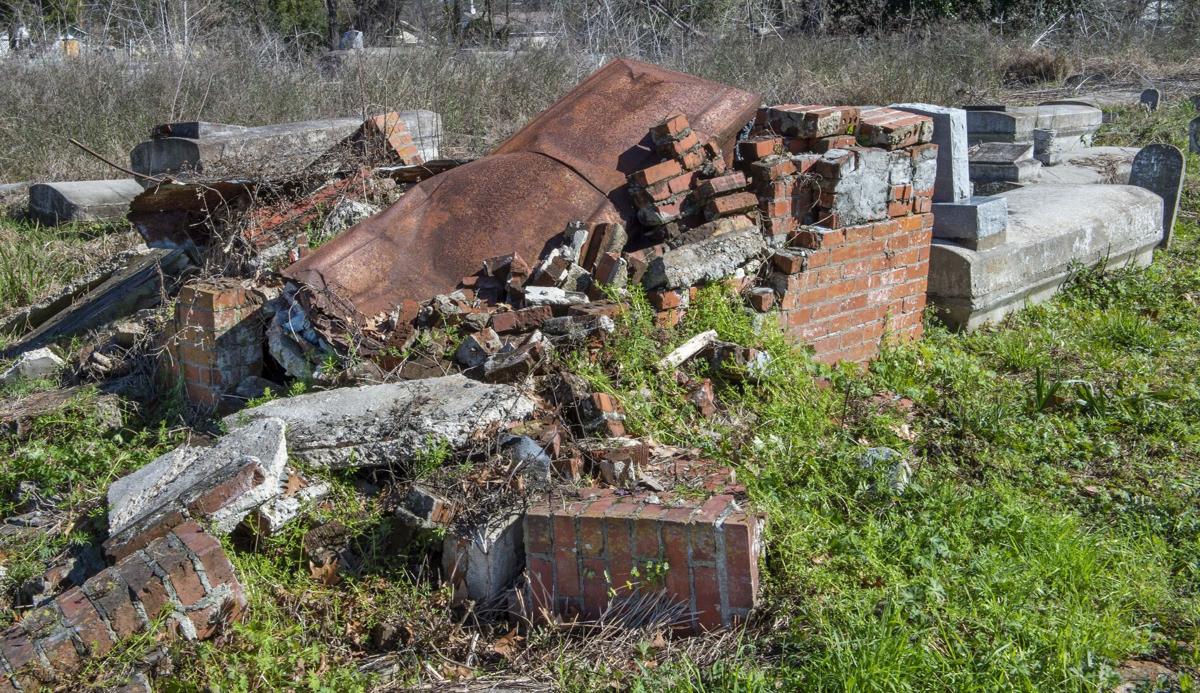 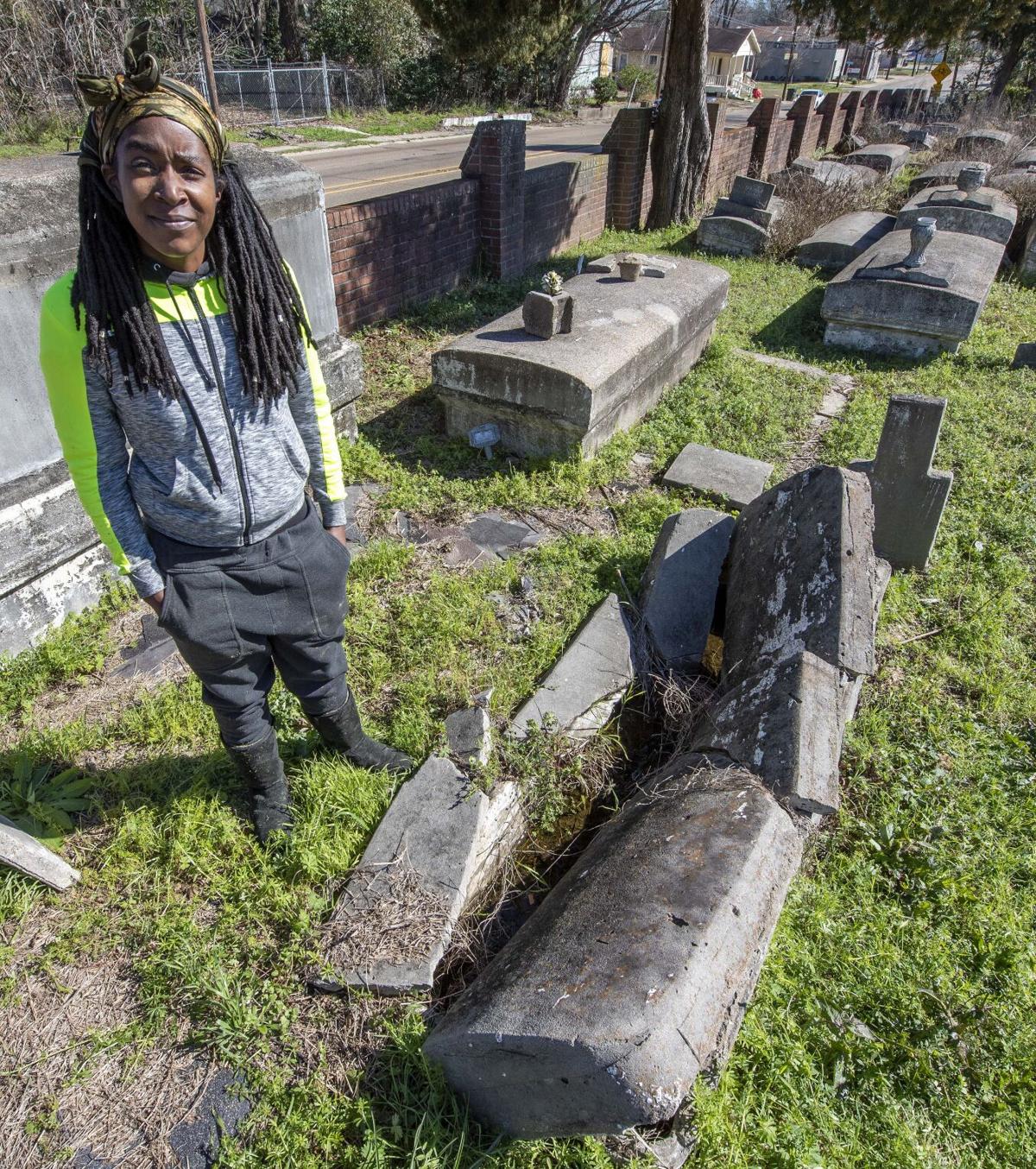 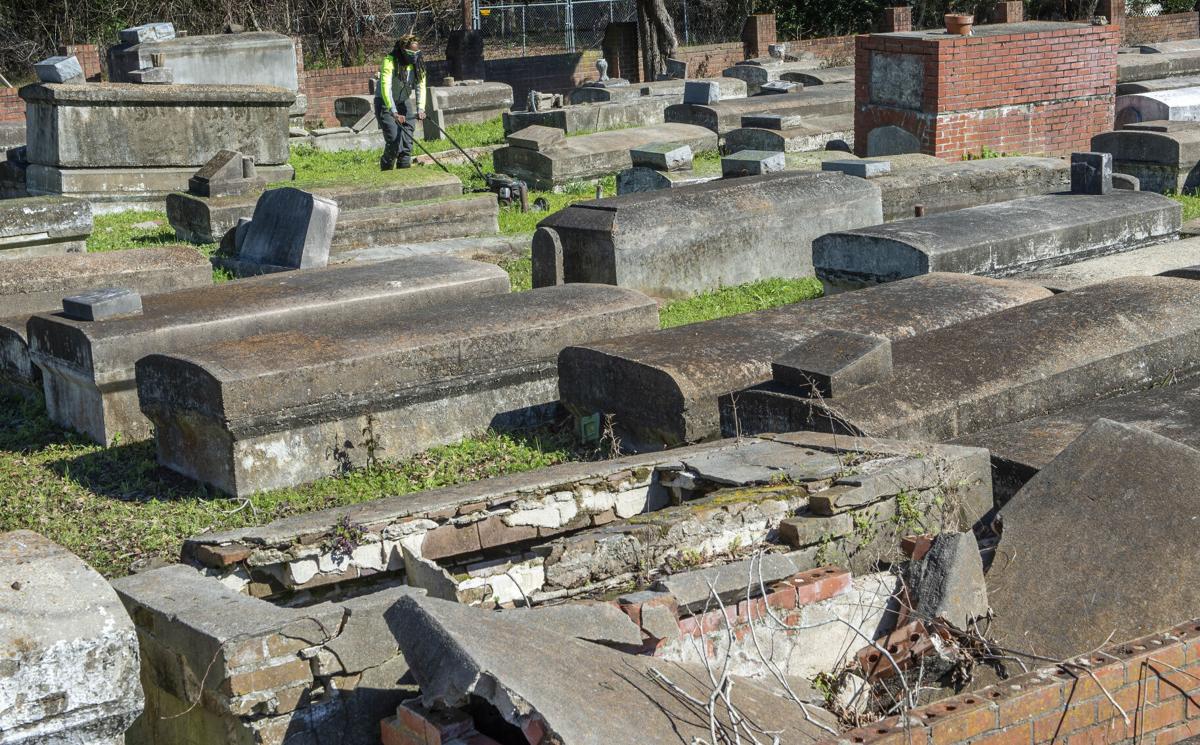 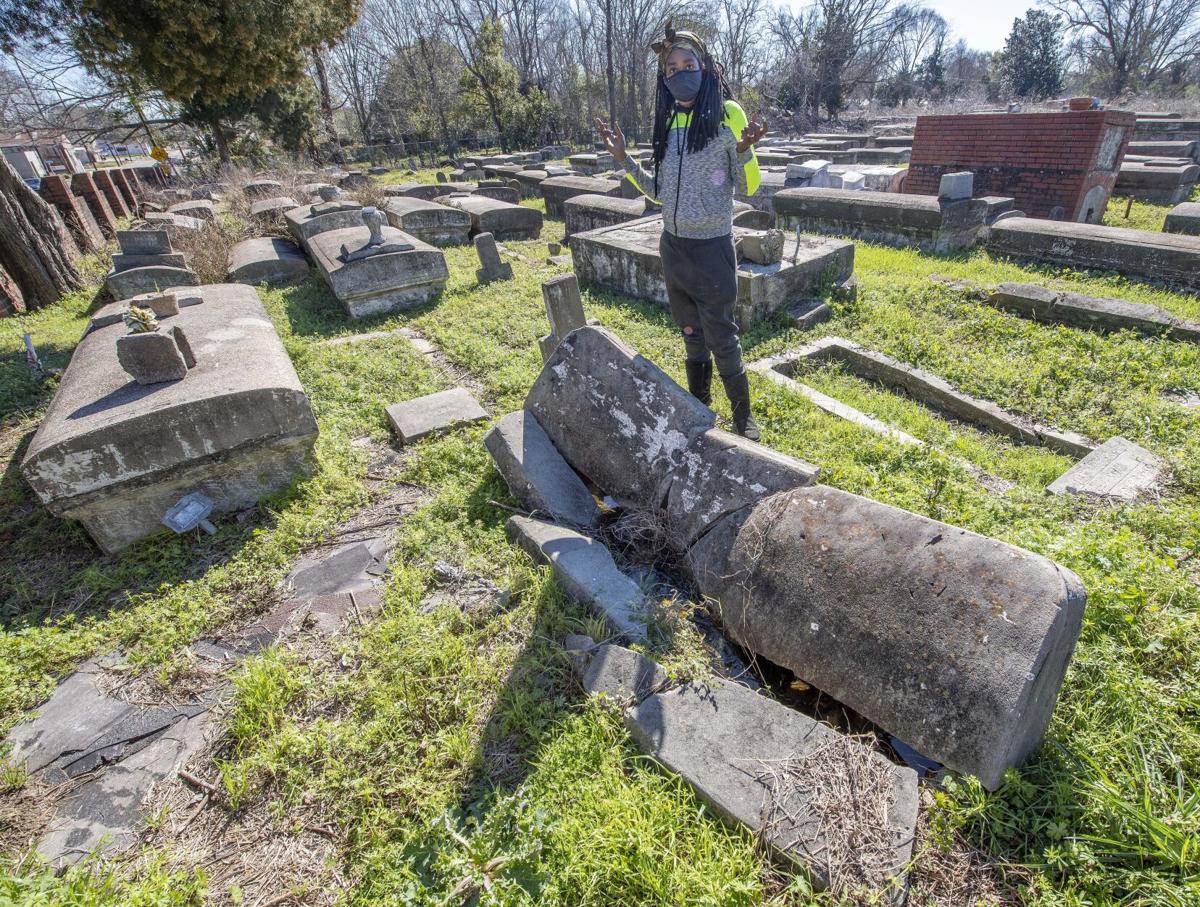 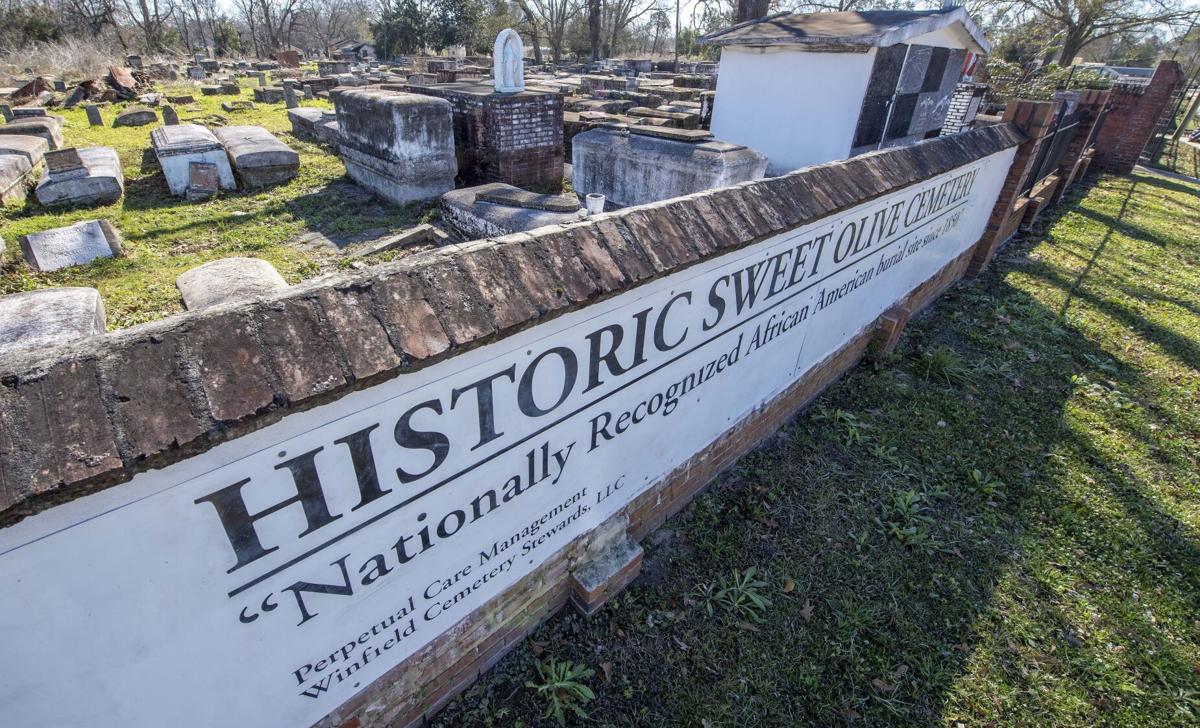 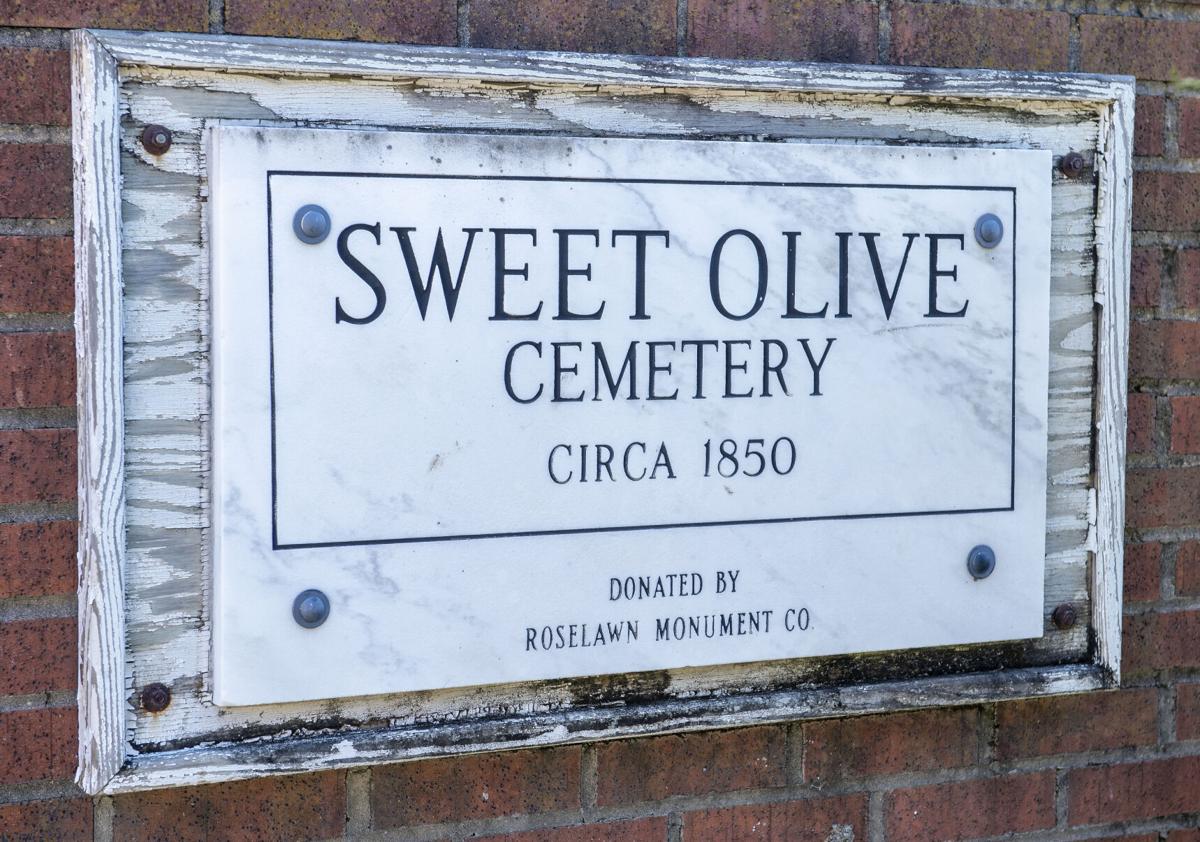 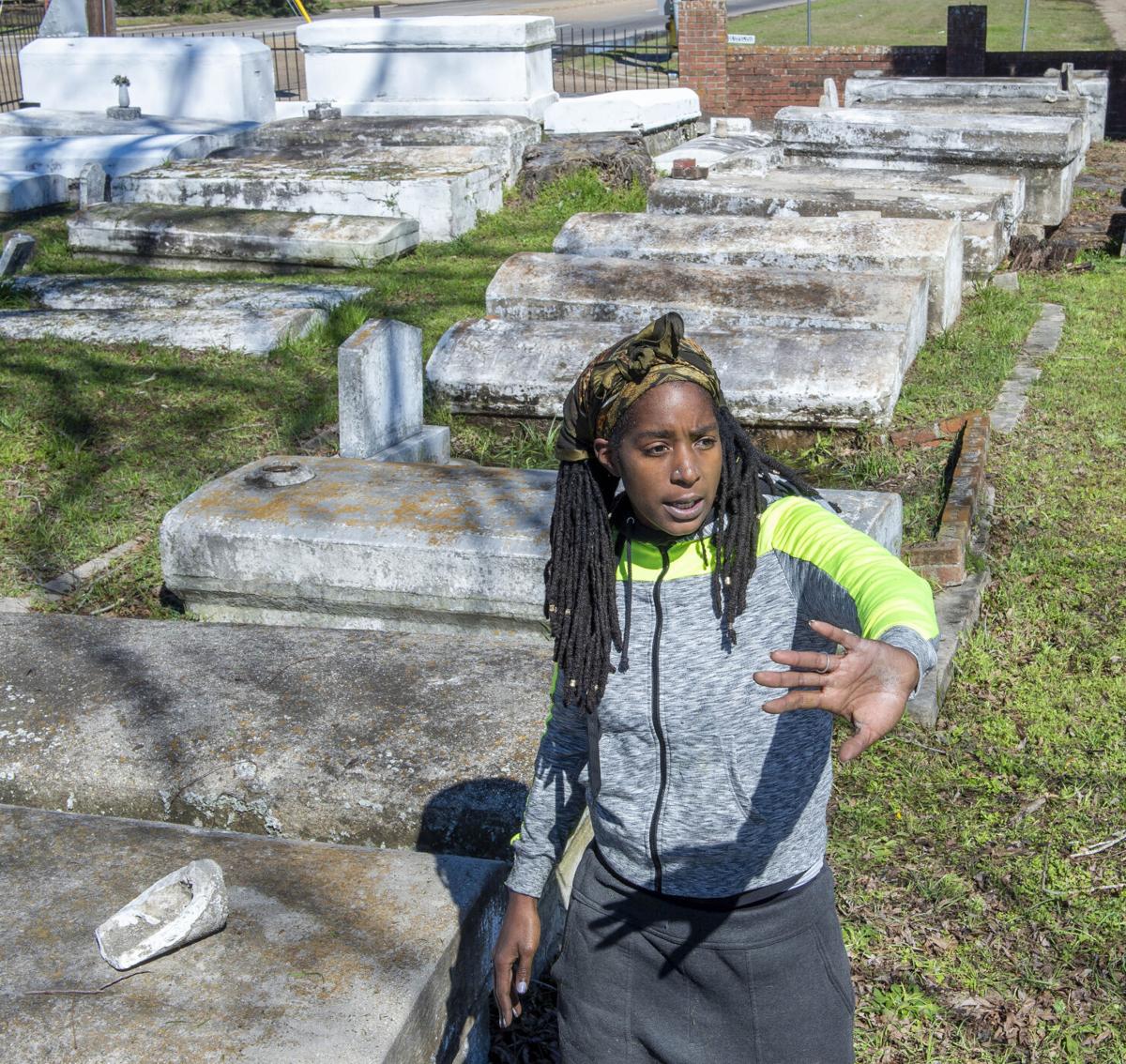 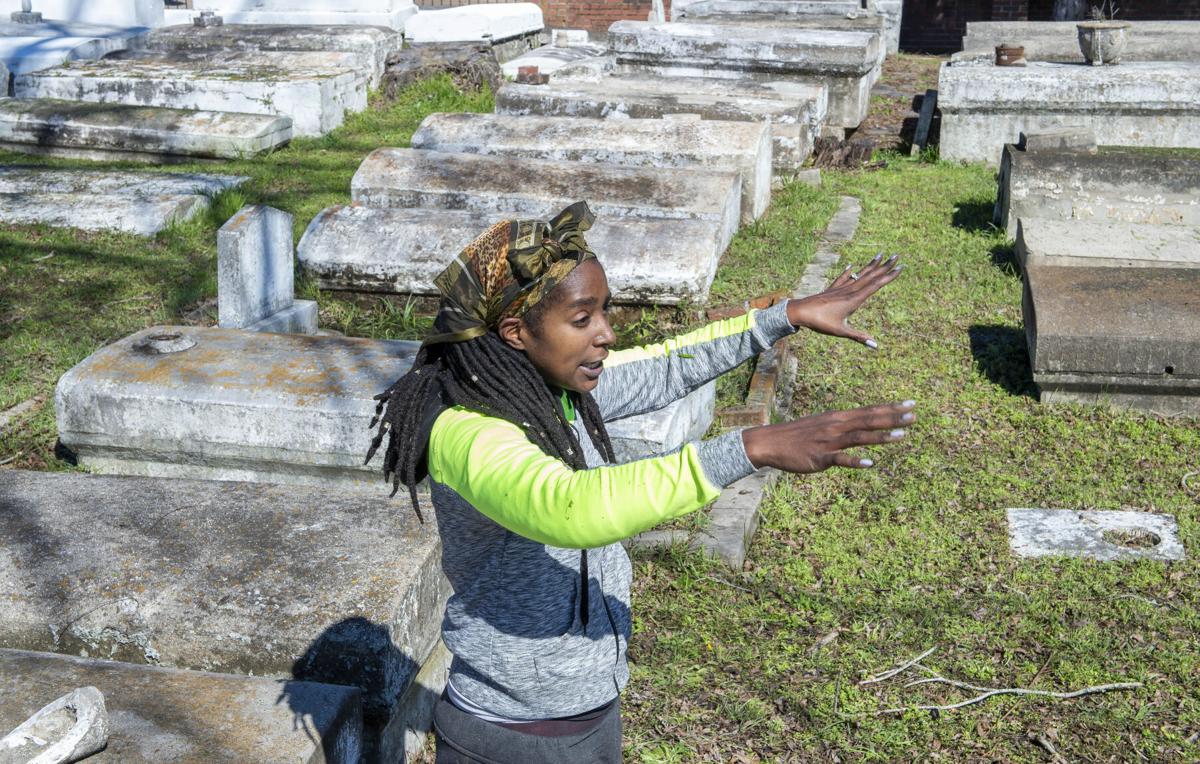 When Markeda Cottonham imagines what the Sweet Olive Cemetery deserves, she pictures a manicured landscape, dotted with tombstones and historical markers memorializing the thousands of preachers, soldiers, and everyday men and women — some of whom were once enslaved — who were buried here over more than a century.

Instead, Baton Rouge's oldest Black burial grounds is a blighted eyesore. Its tombs are overgrown with vegetation, cracked open and crumbling into pieces. The headstones — if they haven't toppled over — are well-worn and barely visible. A dented casket, rusted by the elements, sits exposed atop a pile of bricks.

A human skeleton is clearly visible at one gravesite, exposed to the elements.

"These are forgotten people," said Cottonham on a recent weekday, trudging through the crowded graveyard. "They bury dogs better than this."

Over the last year, Cottonham and others have held twice-monthly clean-ups to restore the 5-acre plot in the heart of Mid City to some semblance of order. They're nearly done hacking away at the six-foot-tall forest of weeds which once obscured the property, and Cottonham soon hopes to kick off an "adopt-a-grave" fundraiser to repair broken tombs and install a new fence. More clean-up events were scheduled for Saturday and Sunday from 9 a.m. to 2 p.m.

But volunteers come and go, and can only do so much. So who, exactly, is responsible for maintaining Sweet Olive Cemetery?

Since the 1970s, the cemetery has, on paper, been under the care of a nonprofit. But according to its current president, W.T. Winfield, the operation is essentially broke.

Winfield said that, in the past, they could rely on incarcerated laborers from Angola or the parish prison for assistance. But now, they're "living on prayers and hope and volunteers."

For Cottonham, that explanation sounds like an excuse to do nothing. Her vision to restore Sweet Olive requires permission from the nonprofit's board, but she said repeated requests to meet with Winfield have gone unanswered. Winfield declined to comment when asked about Cottonham's frustrations.

"They've had a plethora of volunteers," Cottonham said. "I just think they’ve taken advantage of it."

The disrepair at Sweet Olive is nothing new. Its dilapidation, on occasion, catches the attention of the public and spurs a well-intentioned day of volunteering. But sustained efforts rarely last.

Sweet Olive briefly reentered the news last year after its sign was spray-painted with graffiti. The act of vandalism caused outrage among local politicians, who cried out about its "disrespect."

The culprit, a man in the midst of a mental health crisis, was soon arrested, his hospital bed replaced with solitary confinement.

The outrage, however, rarely extends to the conditions inside the cemetery.

"Anything that is near and dear to the African American community is overlooked in this town," said Eugene Collins, the president of the Baton Rouge NAACP, who grew up in the nearby neighborhood of Boulevard Bottoms. "If you ask my grandmother, she would say that's because they've got slaves buried there."

Situated in what used to be Baton Rouge's countryside, Sweet Olive likely originated as a cemetery for the enslaved, though a lack of documentation and grave markers has made that difficult for historians to verify.

"I think any Black person that has roots in Baton Rouge has an ancestor or two buried in that cemetery," said Dale Flowers, a pastor at the New Sunlight Baptist Church, two blocks away.

A sign along North Blvd. identifies Sweet Olive as a "nationally recognized African American burial site since 1850." But it doesn't exist on any national historic registry and its start date is inconclusive, according to a University of Louisiana at Lafayette dissertation on the gravesite written by Anne Mahoney.

That soon may change. The New Orleans-based historic preservation firm, Row 10, is in the midst of a pro bono research project with the goal of applying for recognition on the National Register of Historic Places. The firm is working on a similar application for Old South Baton Rouge.

Kelly Sellers Wittie, a partner at Row 10, said Sweet Olive is particularly noteworthy for its unique cemetery markers, which range from hand-carved to military issued. She said that the ones with personalized inscriptions more often focus on celebrating life rather than fixating on death.

The mayor-president for East Baton Rouge says that using the Crime Stoppers tip line is the best way to target graffiti.

The earliest record of the cemetery dates back to 1898, when it was purchased by a pair of Black Baptist benevolent societies — charitable organizations formed in the aftermath of the Civil War to help those newly freed from slavery cope with the financial hardships that came with rebuilding their lives after bondage.

Soon, the financial hardships struck Sweet Olive itself. In a newspaper bulletin printed in 1910, Baton Rouge's then-Mayor Jules Roux rejected what appears to have been a request from the benevolent societies that the city pay for the plots where they buried "negro paupers."

"The Sweet Olive Cemetery, owned by an association of negroes, in which the negro paupers will have to be buried in the future, wants the city to pay for the ground that the graves take," the bulletin reads. "Mayor Roux takes the position that the race should bear at least this much expense."

A year later, Rev. Washington Taylor — the father of famed preacher Gardner Taylor — published a notice in the newspaper warning all persons owning lots in Sweet Olive to "have weeds, grass, etc." cut and cleaned.

"Civic pride demands it," Taylor wrote. "The departed spirits of our loved ones speaks loudly to us and it also adds to the attraction of our beautiful city."

In 1929, the parish's board of health announced that Sweet Olive could no longer be used for burials, saying it was "greatly overcrowded," according to the  University of Louisiana at Lafayette dissertation on the gravesite. But funerals resumed shortly thereafter and continued up until several years ago.

The cemetery continued to deteriorate until the 1970s, when Fred Matthews, Jr., an ExxonMobil retiree, joined forces with other community leaders to organize a nonprofit dedicated to maintaining the historic site. He worked with then-Council Member Joe Delpit to secure federal grant dollars to build a fence and remove dead or damaged trees — marking one of the few occasions in which the city-parish stepped in to help.

"They ought to do something about it," Matthews, now deceased, remembered telling his wife on one of their daily walks past the cemetery during a 2001 interview with The Advocate.

"We're part of the 'they'," his wife, Vivian Matthews, reminded him.

A generation later, Cottonham would share that same thought.

Originally from California, Cottonham moved to Baton Rouge several years ago, and frequently passed by Sweet Olive, complaining about its disrepair, before finally telling herself: "I'm just going to take care of it myself."

A Baton Rouge man has been arrested and accused of desecrating graves in Sweet Olive Cemetery after he destroyed burial vaults, removed human …

On one of her first visits to the cemetery, with her seven-year-old beside her, she stumbled on an exposed human skull — a jarring experience that she had to explain to her child was not typical of most cemeteries.

"This happened because Black people could only be buried in one area," Cottonham said, describing the separate and unequal conditions that continued to follow Black citizens after death.

Fairleigh Jackson, the executive director of Preserve Louisiana, said Sweet Olive's decay is representative of decades of discrimination, and suggested that BREC step in to support the cemetery — much like it does for the nearby Magnolia Cemetery.

"In a time when we are focusing on equity and inclusions, this is an opportunity for the city to invest in the history of our Black community in a way that it has invested in our white community through the upkeep of Magnolia Cemetery," Jackson said.

BREC took over the maintenance of Magnolia Cemetery in 1947 after the reorganization of the consolidation of city-parish government. A spokesperson for the parks and recreation agency, Cheryl Michelet, said they spend roughly $21,600 a year mowing the property.

Cottonham said that some day, she hopes she can be buried in Sweet Olive.

"That way, I can look over to make sure they're still keeping it up when I'm gone," she joked.

She stops at a roadway bisecting the cemetery — America Street — which has long been closed, and points to puddles of standing water that never seem to evaporate.

"They say it's the tears of the people buried here," Cottonham said. "I'm hoping it will dry up once we're finished cleaning up."

It was with interest that I read Blake Paterson’s article regarding Sweet Olive Cemetery in the Sunday Advocate. I want to call your attention…