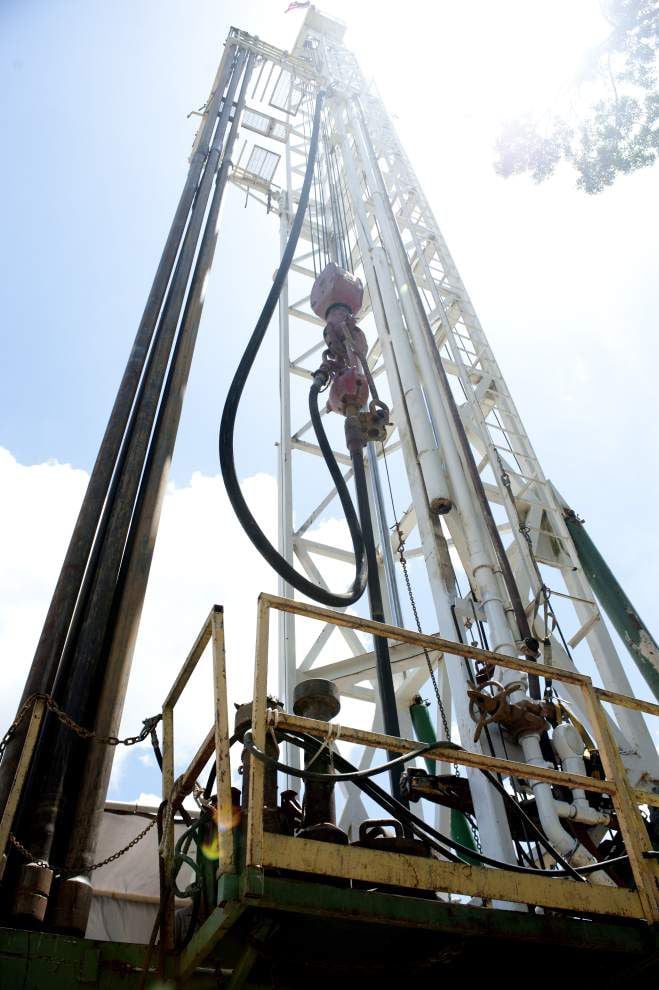 Advocate file photo by CATHERINE THRELKELD -- Baton Rouge Water Company drilled a scavenger well at 31st and North Streets. The well is designed to pull out salt water in an attempt to keep the salt water from other freshwater wells. The well also produces fresh water which is put into the company's water system. 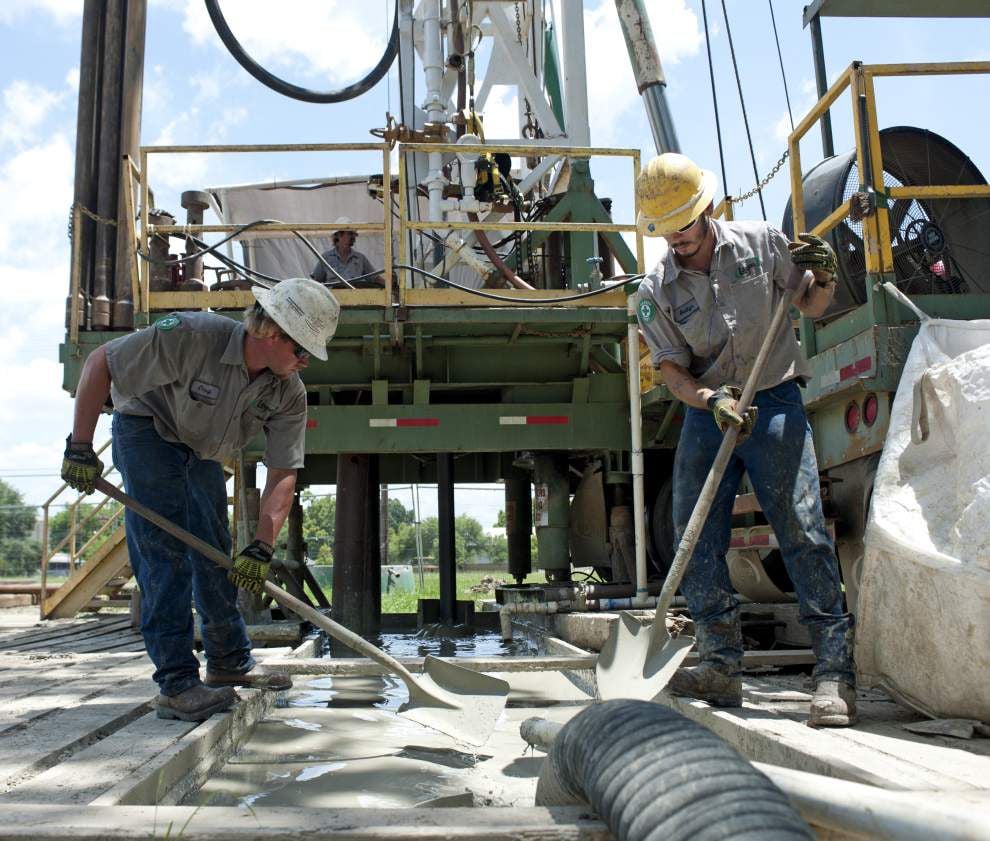 Advocate file photo by CATHERINE THRELKELD -- Craig Lambert, left, and Austin Sykes clean drilling cuttings out of the ditch with shovels at the site of a scavenger well for the Baton Rouge Water Company.

Advocate file photo by CATHERINE THRELKELD -- Baton Rouge Water Company drilled a scavenger well at 31st and North Streets. The well is designed to pull out salt water in an attempt to keep the salt water from other freshwater wells. The well also produces fresh water which is put into the company's water system.

Advocate file photo by CATHERINE THRELKELD -- Craig Lambert, left, and Austin Sykes clean drilling cuttings out of the ditch with shovels at the site of a scavenger well for the Baton Rouge Water Company.

The Capital Area Ground Water Conservation Commission has had one task for the past 40 years: to blunt the threat of underground saltwater fouling the Baton Rouge area’s prized fresh-water supplies.

Critics claim the commission has done little to combat the saltwater encroachment, a movement accelerated by the massive pumping from aquifers under the city by industry and by companies that sell water to homeowners and businesses.

Frustration about the slow pace of action prompted a bill before the House Natural Resources and Environment Committee last month that would lessen pressure on the freshwater aquifers by limiting what industry uses. The legislation would have imposed a timeline for industry to start pumping what it needs from the Mississippi River, as is done elsewhere in Louisiana.

The bill was quickly withdrawn before the committee had a chance to vote on it.

“It’s hard to beat industry at the Legislature,” said Hays Town, a retired contractor and engineer who founded the group Baton Rouge Citizens to Save Our Water Inc. The group wants to curtail industrial use of the aquifer and claims the commission is beholden to the petrochemical companies and paper mills that use it.

The commission is made up of three representatives from industry, three from public water suppliers, a member from each of the five parishes around Baton Rouge, a member nominated by the board itself, one member from the Louisiana Farm Bureau/Cattlemen’s Association and a member from the state Department of Natural Resources.

DNR Commissioner of Conservation James Welsh has called on the commission to find a solution. In a letter last fall, he said the commission should “develop a full-scale plan of action with specific steps and goals set out for long-term resolution of the saltwater intrusion issue, an effort in which the Office of Conservation stands ready to assist.”

Welsh wrote that “simplistic solutions that capture the public imagination such as solely limiting industry use” or depending solely on a well to divert the saltwater “fail to solve the problem and could make things worse.”

Although the Office of Conservation has general powers in regard to aquifers in the state, it’s the Capital Area Ground Water Commission that has legislative authority to easily make changes to how the aquifer is used, according to Patrick Courreges, a spokesman for DNR. For example, he said, DNR doesn’t have the authority to ban withdrawal of water from the aquifer, but the commission could do so with a vote of the board.

“They’re their own body,” Courreges said.

The ground water commission argues that the natural underground water system is complicated, and caution is needed to avoid making the problem worse.

“This is not a problem that’s going to be solved overnight,” Anthony Duplechin, director of the Capital Area Ground Water Conservation Commission, told the house committee.

Town said he asked state Rep. Edward “Ted” James II, D-Baton Rouge, to present the bill, which would have set limits on industrial withdrawal from the aquifer in north Baton Rouge over the next six years.

Currently, about half of the 170 million gallons drawn daily from the aquifer in Baton Rouge is used by industry, with the water companies accounting for the other half.

For decades, it’s been known that extensive pumping from wells north of the Baton Rouge Fault — a giant crack in underground formations of clay, rock and sand — pulls saltwater from the areas further south. In 1974, the state legislature created the Capital Area Ground Water Conservation Commission with the specific intent to address the problem.

Duplechin claims the bill Town was backing would have declared the whole aquifer as impaired even though saltwater intrusion affects only a small part of it. He argued further that a process is already in place to make such a declaration if need be — and it’s not through legislation.

“It’s almost like legislating a guilty verdict for someone who hasn’t been found guilty,” Duplechin said.

He defended the commission’s actions to address the problem.

“I’ve been here three years, and I think we’ve done a lot,” he said.

As to the activity of the commission in the decades before that, Duplechin said the problem might not have been seen as pressing because it was progressing slowly. However, he said, that has changed.

“We can’t push it off any further into the future,” he said.

Town and other critics of the commission say industrial interests on the commission have stymied any real changes because it’s cheaper to tap clean freshwater aquifers than pump water from the Mississippi that has to be filtered and treated.

Ten different sand layers form the aquifer in Baton Rouge, and salt water has intruded into most of them. Named for the depth at which they are found, the 2,000- and 1,500-foot sands are two of the critical freshwater sources.

Last year, the groundwater commission approved a plan that would put “caps” on how much water could be taken out of those two sands. But those caps are high enough that they wouldn’t curtail pumping at current levels and are higher than the five-year average of pumping from 2007 through 2011.

Dale Aucoin, with ExxonMobil and a member of the commission, said ExxonMobil already takes half of the water it uses from the Mississippi River.

A new water management plan approved by the groundwater commission early last month doesn’t call for any specific action other than gathering more information, including the use of computer simulations to study how changes in pumping from various sands could affect the saltwater intrusion.

Although two of those models are complete, eight more need to be done, with the last one scheduled to be finished in September 2021.

“It’s a study plan for the next 10 years,” Town said. “They really don’t want to do anything.”

Duplechin disagreed, saying the commission is scheduled to get a modeling report from a new layer of aquifer sand each year. The commission will decide on any action needed for each layer, he said.

“We’re not going to wait for seven years to put on more limitations,” he said.

Town is pushing for a halt to all industrial pumping from the aquifer.

But a U.S. Geological Survey report notes computer models show that would cause the saltwater wedge to move more rapidly toward the drinking water wells.

Town counters that while the modeling does show the saltwater wedge would shift and affect one or two public use wells, it also suggests the saltwater plume wouldn’t head as far north as is now predicted.

Duplechin said Town isn’t a hydrologist, and the models show shutting down industrial use of certain levels of the aquifer wouldn’t keep salt water away from some important drinking wells.

Population growth and industry growth have all contributed to the problem, he said.

“It’s not against the law for industry to use the ground water,” Duplechin said.

Currently, the Baton Rouge Water Co. is operating a “scavenger well” to help remove salt water before it gets to some of the private water supply company’s freshwater wells.

Eugene Owen, the company’s chairman, told the house committee in April that the 2,000-foot layer of the aquifer faces a pressing problem and reducing industrial withdrawal is a good answer.

Of equal concern, he said, is if industry simply reduces the current level of pumping in the 2,000-foot sands and instead takes that water from the 1,200-foot sands.

Such a shift could cause similar problems in the 1,200-foot sand, Owen said.

The computer modeling being done by USGS with funding from the commission, state Department of Transportation and Development and the city-parish on the 1,200-foot sand is expected to be completed by September.