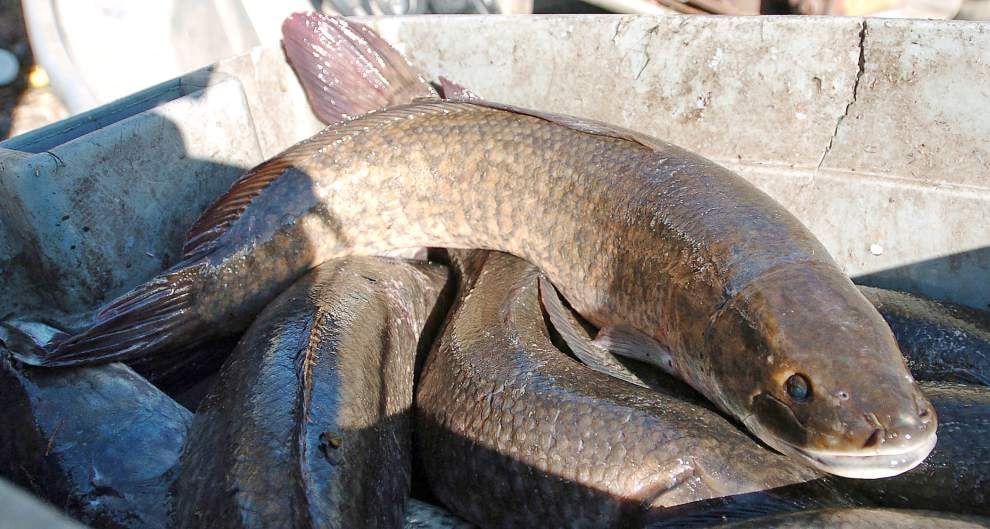 A Bowfin fish that that has just been caught for caviar in Pierre Part, La, Tuesday January 27, 2004. The small but growing American caviar industry is hoping for a boost from federal authorities, who are considering a halt to trade of the priciest caviar from the Caspian Sea. The ban would block imports of beluga caviar -- mouth-watering eggs from the Caspian's largest sturgeon, a 250 million-year-old species that has been ravaged by overfishing and pollution.(AP Photo / Chris Graythen) 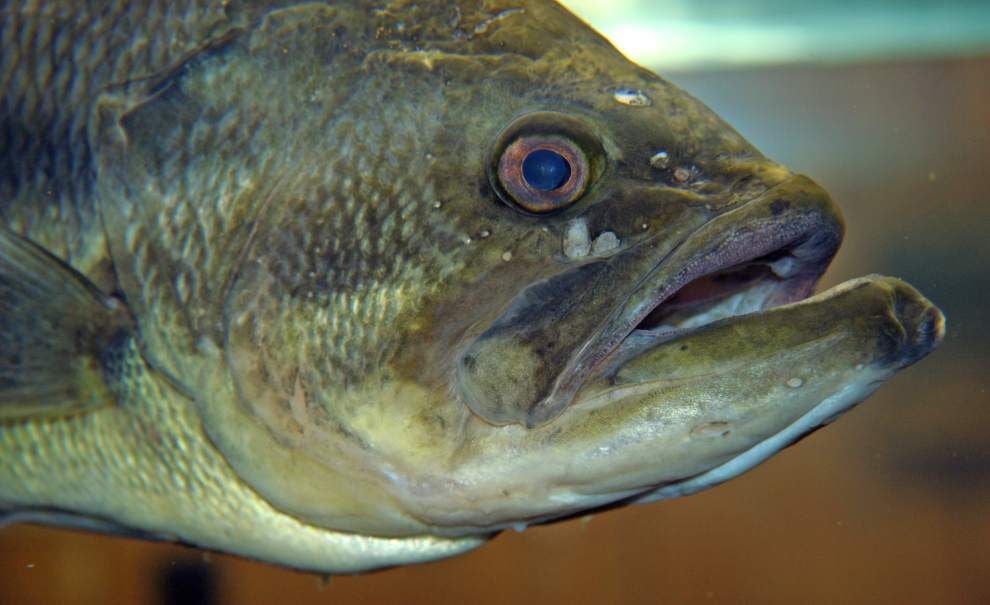 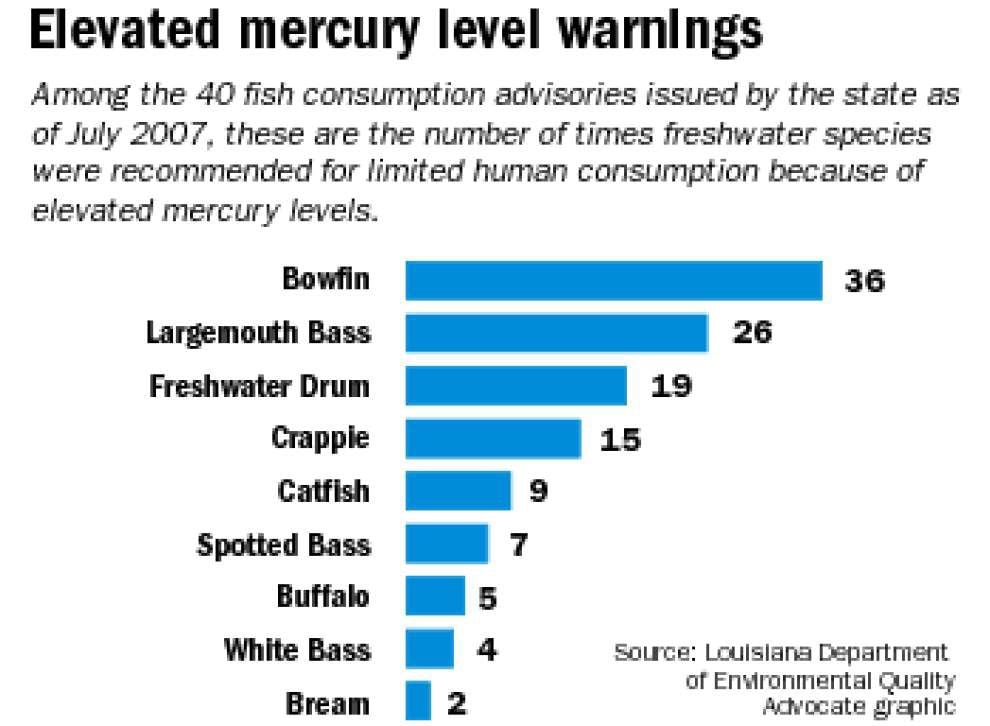 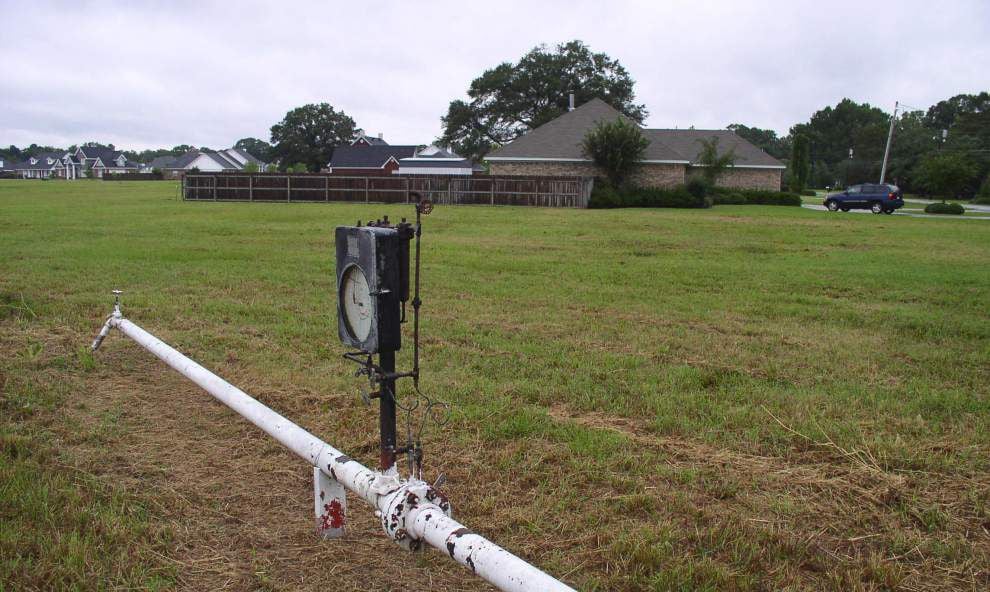 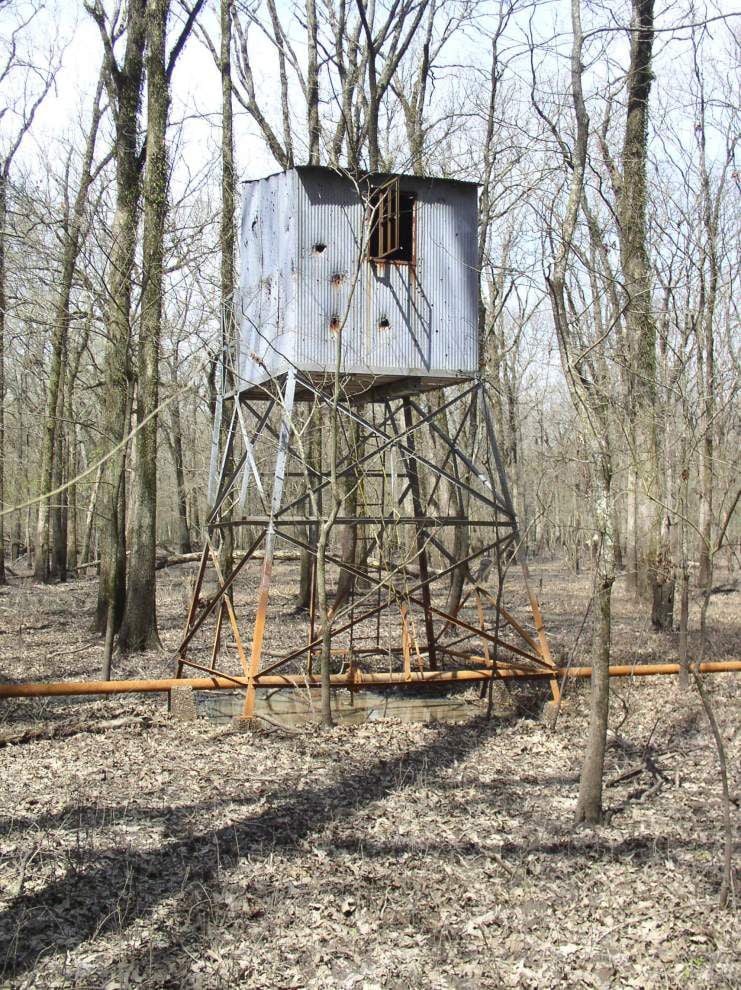 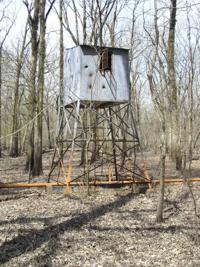 A Bowfin fish that that has just been caught for caviar in Pierre Part, La, Tuesday January 27, 2004. The small but growing American caviar industry is hoping for a boost from federal authorities, who are considering a halt to trade of the priciest caviar from the Caspian Sea. The ban would block imports of beluga caviar -- mouth-watering eggs from the Caspian's largest sturgeon, a 250 million-year-old species that has been ravaged by overfishing and pollution.(AP Photo / Chris Graythen)

Seven years after the end of a much-lauded program to monitor mercury in Louisiana’s waterways, state officials lack updated data to warn people about any potential contamination in the fish they catch and eat.

The state Department of Environmental Quality made reducing mercury pollution, particularly in water bodies, a major priority from 2004 to 2008. Bolstered by financial support from the Legislature, the agency ramped up a program not only to test soil, water and fish samples across Louisiana but also to educate the public about the hazards of mercury contamination.

But that all ended in 2008, when DEQ shelved the program amid a push by newly elected Gov. Bobby Jindal to force cuts across various state agencies.

Since then, there has been no fish tissue sampling, except in the aftermath of a spill of some kind. That lack of sampling means the status of mercury in Louisiana waters is largely unknown.

“At one time, we had one of the best mercury programs in the United States,” said Barry Kohl, an adjunct professor with the Tulane University Department of Earth and Environmental Sciences who was involved in pushing for a mercury program in the state. “To me, it’s a major loss, just idiocy that the state doesn’t care enough about public health to continue the program.”

Chance McNeely, a DEQ assistant secretary with the Office of Environmental Compliance and a former Jindal policy adviser, said the decision to halt the mercury reduction program doesn’t mean it won’t eventually return.

“At the time, we felt we had completed the mercury program and could basically put it on hold for a while,” McNeely said. Department officials, he said, felt they could turn the program on and off every few years or every decade to check on the status of mercury in fish across the state.

“It was never the intention of the department to never revisit mercury again,” he said. However, there is no timeline to restart mercury testing in fish, although it has been years since it was last done.

One source of mercury is air emissions by coal-fired power plants and other facilities. After it gets in the water, the pollutant is absorbed by fish, which can then pose a health risk to people and other animals if eaten in large enough quantities. The danger is particularly acute for children and pregnant women.

Elimination of the mercury program — which cost $500,000 a year — came at a time when the newly minted Jindal administration was not only looking to reduce spending across the board but specifically to wean DEQ from the state general fund. Instead, the agency would depend largely on fees and fines from industry.

Hal Leggett, the DEQ secretary from 2008 to 2010, said that shift came from the Governor’s Office.

“The directive coming from the governor was, ‘Agencies need to get off the general fund,’ ” Leggett said. While he agreed it was a good idea to be self-sufficient, it did mean making funding choices.

McNeely disagreed, saying the change was an internal decision at DEQ.

“I can assure you the department made its own decision to get off general fund dollars,” he said, adding that the DEQ executive staff decided when Jindal came into office that they wanted to be more self-sufficient.

General fund money was particularly essential for the mercury program because of a state law passed in 2006 that required that the program be funded by state tax dollars, grants or donations. Since the shift in funding sources, DEQ has not returned to the Legislature to ask for the program to be funded through other fees.

Chris Piehler, a retired DEQ employee who oversaw the mercury program, said the decision not to continue was a mistake.

“We had a program that answered the question that a lot of people had in this state: Are these fish safe for me and my children to eat?” he said. “That’s not happening anymore.”

Fish consumption advisories for mercury are still listed on the state Department of Health and Hospitals website, but information about the 48 listed water bodies in the state dates back to testing done seven to 14 years ago.

The advisories suggest limiting or eliminating consumption of certain fish caught from bayous, rivers and lakes all over Louisiana, from Henderson Lake to Blind River to Pearl River.

In 2004, DEQ had three staff members assigned to collect fish tissue samples and gather other mercury information around the state. About 100 sites could be sampled every year, with advisory areas getting a follow-up visit every two years and other sites every four to five years. The result was advisories informing the public how much of the fish from certain waters was safe to eat and even what fish could be consumed by children and pregnant women.

“Is it different now? Well, we don’t know unless we test again,” Piehler said.

Fish sampling started in Louisiana in 1989 in the Ouachita River, where concerns about mercury levels prompted more testing around the state.

At the same time, environmental groups like the Sierra Club and the Louisiana Environmental Action Network pushed for a statewide mercury program, Kohl said.

Gov. Mike Foster agreed to get funding in place for fish samples, and that work got an additional boost in 2004 when Gov. Kathleen Blanco announced a mercury reduction initiative.

“It was time to do something about it,” said Mike McDaniel, who was DEQ secretary from 2004 through 2008. “It was a festering issue; we knew it was a potential health issue.”

In 2006, the Legislature expanded the focus on mercury, passing Act 126 to phase out mercury-containing products in the state. The next year, DEQ came up with a more expansive mercury reduction plan.

But that ended in 2008, when the general fund money evaporated.

At the time, Piehler said, the thought within DEQ was that the agency had such a complete and robust database that it would be OK to take a couple of years off and to worry about finding a way to get the program going again down the road. Some of the work could still be done as part of water quality activities, and the fish testing and other work could have a brief break.

“So the theory was: We justify discontinuing because the database was so robust and because the mercury levels won’t change that much from year to year,” Piehler said.

But the money never returned.

“I remember every single (legislative) session, they would ask, ‘What can you do to spend less money?’ not, ‘What missions do you need to take on?’ ” Piehler said. “We had to be incredibly careful not to say that we just don’t have enough time, people, money to do that,” he said.

If the program were up and running, it might report a decline in mercury contamination, at least in certain areas.

Historically, the largest mercury polluters in the state were two chlor-alkali plants that used mercury in their processing. However, PPG in Lake Charles announced in 2005 that it was discontinuing its mercury processing, followed by Pioneer Americas in St. Gabriel in 2007.

According to the EPA’s Toxic Release Inventory, Pioneer Americas went from releasing 1,922 pounds of mercury in 2004 to 152 pounds in 2013, according to the most recent information available.

“They realized that there was a business reason to get out of the mercury,” said William Schramm, a geologist supervisor at DEQ. “I’d say it was very effective. It came at the right time. Industry was ready.”

Another focus of mercury eradication over the past decade has been cleaning up old oil and gas meters on pipelines. One expert said the program has been important because each meter contained as much as 8 to 10 pounds of mercury that over time could leak, spill or get into the environment.

Mercury was used in the meters to measure flow in pipelines from the 1920s through 2006, when the Legislature passed a law that banned new meters of that type.

Cleaning up meter sites was a herculean task, Schramm said. Many companies didn’t keep good records, or any records, of where the meters were located, and DEQ often depended on the institutional memory of former company employees to locate the spots.

“It’s very, very hard to go back and find a majority of these sites,” he said.

At one point, Schramm had some money from the U.S. Environmental Protection Agency to compile a database of the meter sites, contact companies and look for possible locations.

“We got about 800 entries, but that’s maybe, who knows, a tenth of the number out there,” he said.

A 2007 lawsuit filed by environmental groups against the Houston-based oil and gas company EnerVest got a favorable judgment in 2009 and resulted in the immediate cleanup of 400 meters, with plans to clean up another 800 sites in north Louisiana.

In addition, the company agreed to clean up legacy mercury meter sites on any new property it acquired in Louisiana, bringing the total up to about 900, said Kohl, who was appointed by the U.S. District Court for the Western District of Louisiana to be the liaison between the environmental groups and the company. Every year, he meets with company representatives to review the progress in Union, Ouachita and Morehouse parishes.