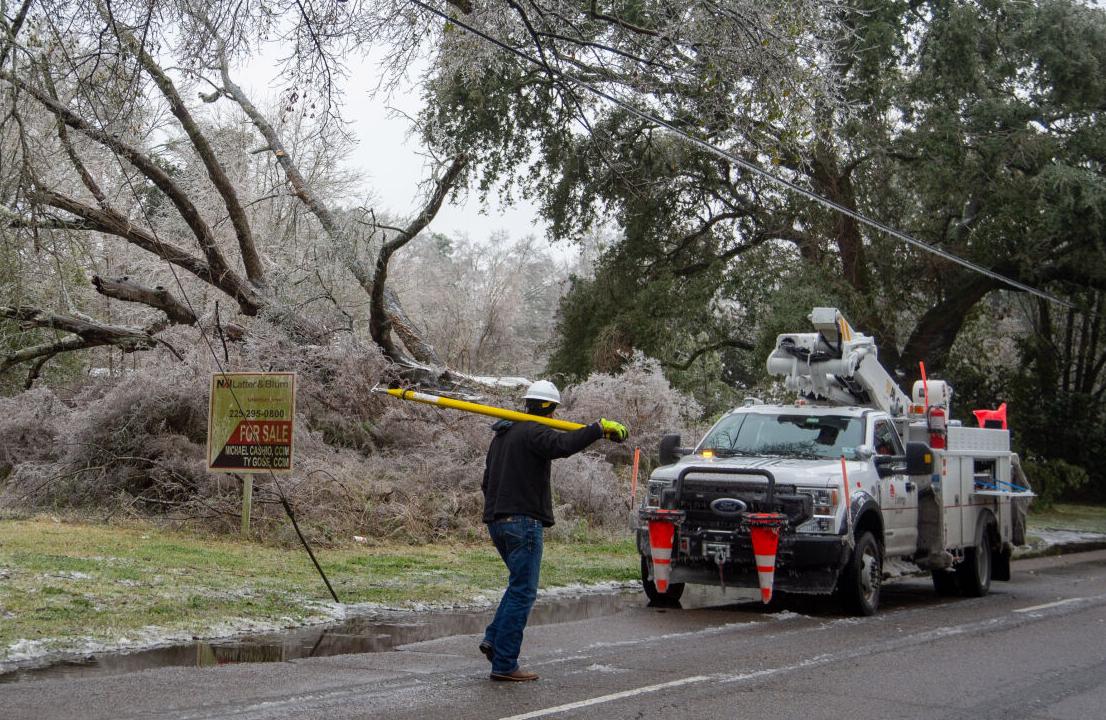 Entergy and DEMCO officials said their crews are working around the clock to restore power to their customers, but lingering ice in trees and on the roads has slowed their progress.

About 25,000 Entergy customers still didn't have power Wednesday afternoon. Vice President of Distribution Operations John Hawkins Jr. said he expected a "large component" of them to be restored soon.

Hawkins declined to comment on how long it would take for all repairs to be completed, citing the possibility for new outages as cold weather remains in the area.

“With the conditions, I don’t want to go on record and say everyone will be restored by this moment,” Hawkins said. “It’s just been a challenge for us with the ice. In a hurricane, we all hunker down until it passes. In this event, we’re out there working in the element that’s challenging us.”

Entergy's online map, which includes a tally of how many customers are without power, has sometimes shown incorrect information because of an influx workers coming in from outside the area to help who don't report completed work directly to Entergy's system, Hawkins said.

DEMCO crews face similar obstacles with icy roads that have made it difficult to get to some areas, delaying the restoration of power for some of their customers, said DEMCO CEO Randall Pierce.

“We’re accustomed to dealing with hurricanes and how hurricanes work in terms of knowing ahead of time the trajectory, the projection, the intensity, then being able to respond to that once it’s over,” Pierce said. “With this, a lot of it for us I think is just because we aren’t accustomed to it. Icy roads and conditions are just not as obvious when you first begin the assessment process.”

Just under 6,000 DEMCO customers remained without power Wednesday afternoon, down from a peak of 25,000, Pierce said. He expects power to be restored to all of DEMCO’s customers by sometime Saturday, but bad weather could delay the process.

While the crews worked, Baton Rouge hotels filled up with local residents who fled their powerless homes amid the cold weather.

Paul Arrigo, president and chief executive officer of Visit Baton Rouge, said the storm filled up every available hotel room in the area on Monday and Tuesday night. Some hotels weren’t able to open because they didn’t have power or were unable to bring in staff. It will be two weeks before it’s known how many of the 8,444 hotel rooms in the area were filled because of the storm.

The boost in business was welcome, Arrigo said. Even though Mardi Gras parades didn’t roll in Baton Rouge this year, the holiday knocked out government and corporate travel.

Hotels have seen a dip in customers as a result of the coronavirus pandemic and the downturn in travel and business meetings. The occupancy rate in metro Baton Rouge for the week ending February 13 was 54%, Arrigo said. That compares to 61% for the same week a year ago.

“This was supposed to be a slow week with Mardi Gras and kids being out of school,” said Scott Michelet, president of the Baton Rouge Lodging Association. “This was an influx in business we did not anticipate.”

Michelet, who serves as the general manager of Crowne Plaza Baton Rouge, said every one of the 294 rooms in his hotel was occupied by either locals, who wanted to get away from power outages, or utility workers, who came in to help turn electricity back on.

Other area districts, like Livingston and Tangipahoa parishes, said they would reopen Thursday.

Despite progress repairing outages, both Hawkins and Pierce said power problems could continue to plague the area over the coming days as more cold weather moves into the area.

Statewide rolling blackouts remain a possibility for Entergy customers if there is a sudden dip in power generation, like the Wednesday blackouts caused by a generator going offline, Hawkins said.

But both men pointed to a possible freeze Thursday night that could create new outages and delay repairs if roads freeze again.

“This ice is a different animal for us down here in the South,” Pierce said.

The thaw-out from freezing temperatures cascaded from trickles of water to a torrent of burst pipes in the Baton Rouge area.