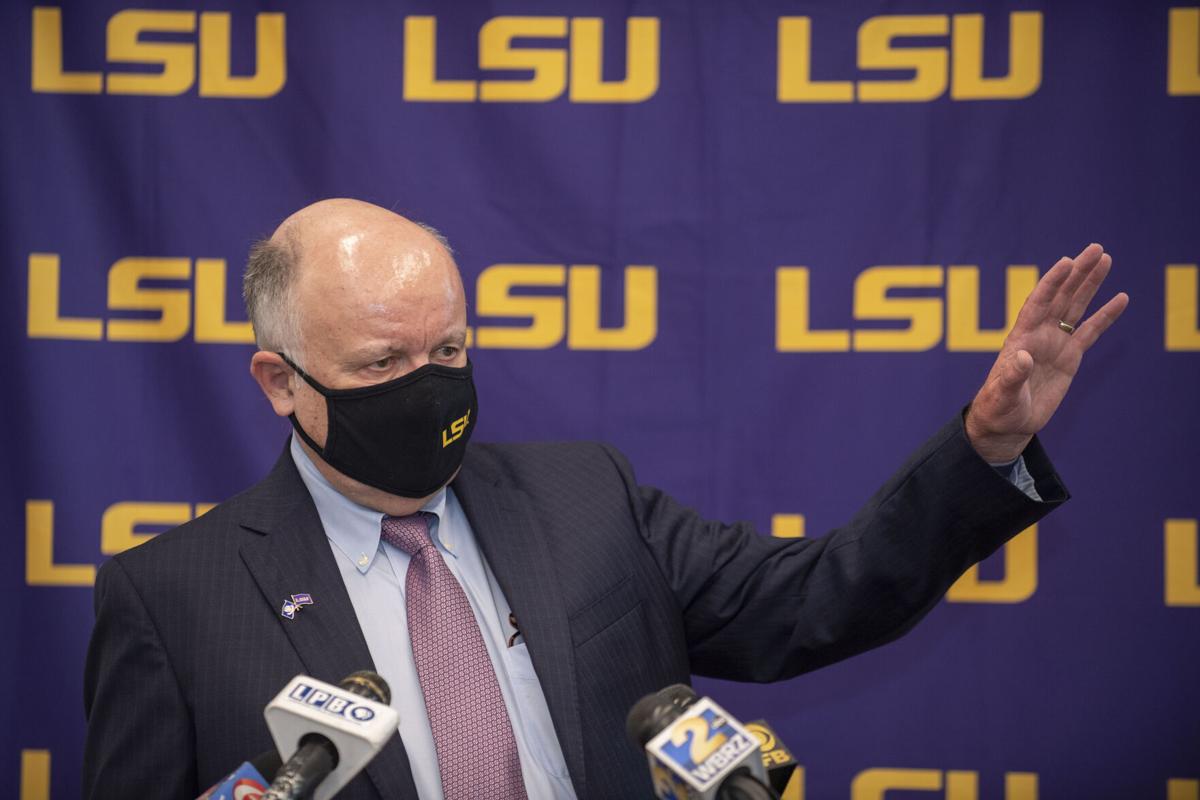 LSU interim President Tom Galligan speaks at a press conference along with Dr. Deborah Birx, coordinator of the White House coronavirus task force, and Gov. John Bel Edwards, after one of several roundtable discussions with LSU officials and others, Wednesday, Sept. 23, 2020 in the LSU Foundation Training Room. 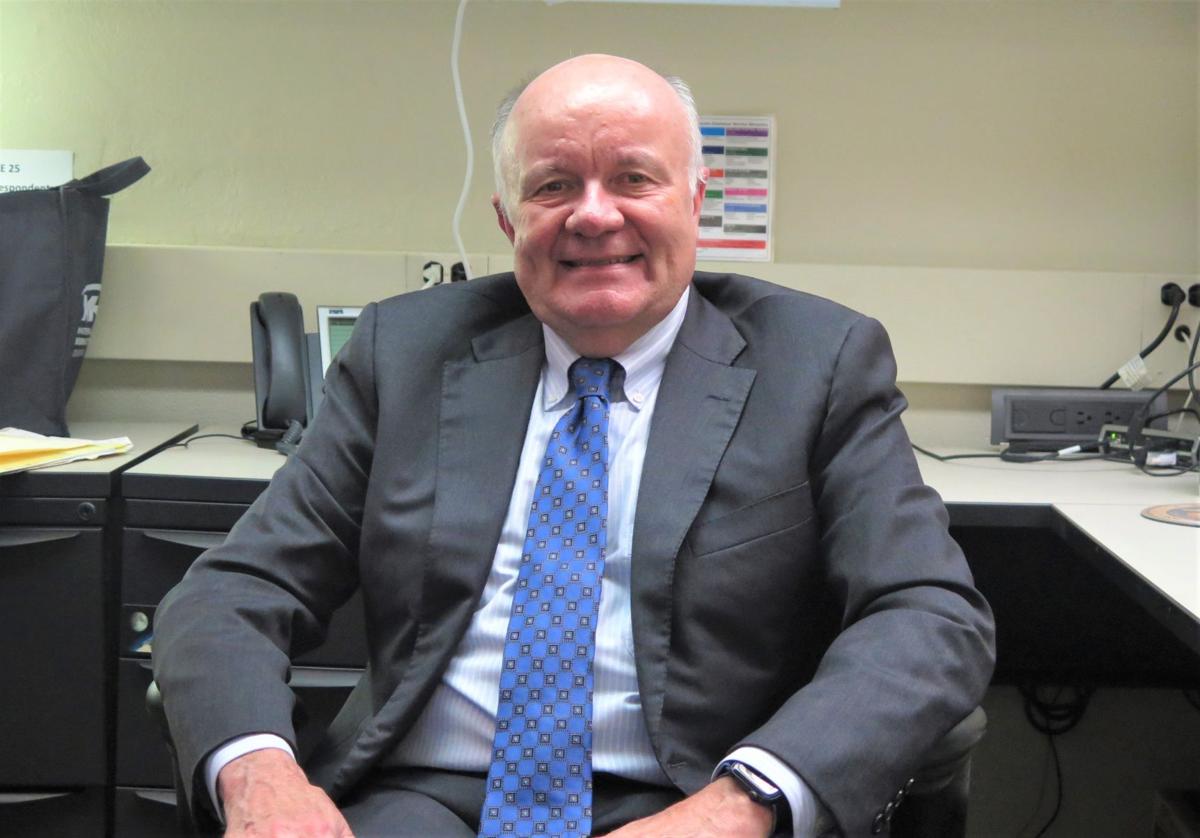 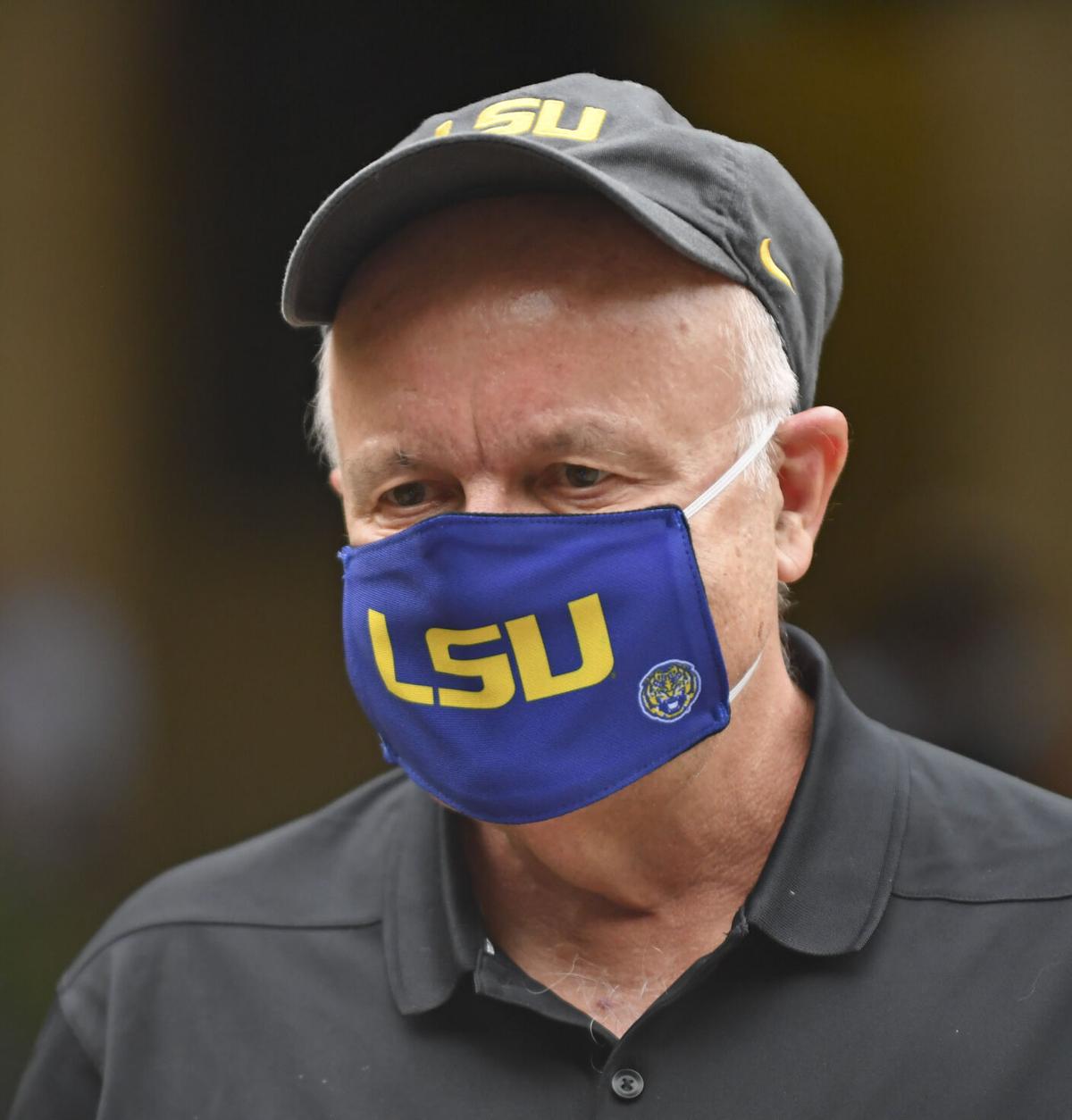 LSU interim president Tom Galligan speaks during a planned peaceful blackout Wednesday demonstration to call for unity and promote change on campus, Wednesday, June 3, 2020, in the quad at LSU in Baton Rouge, La.

LSU interim President Tom Galligan speaks at a press conference along with Dr. Deborah Birx, coordinator of the White House coronavirus task force, and Gov. John Bel Edwards, after one of several roundtable discussions with LSU officials and others, Wednesday, Sept. 23, 2020 in the LSU Foundation Training Room.

LSU interim president Tom Galligan speaks during a planned peaceful blackout Wednesday demonstration to call for unity and promote change on campus, Wednesday, June 3, 2020, in the quad at LSU in Baton Rouge, La.

LSU Interim President Tom Galligan said Monday that the university has sent more than 60 files relating to a smaller number of sexual misconduct and sexual violence cases to attorneys from the Husch Blackwell law firm as fallout mounts from allegations that LSU has botched its responses to such investigations.

Galligan, speaking virtually to the Baton Rouge Press Club, again urged patience while the law firm investigates LSU’s handling of sexual harassment and domestic violence cases from the past few years. While Galligan pledged transparency going forward, LSU head football coach Ed Orgeron refused to answer questions during a news conference Monday about whether he or his staff have participated in the investigation.

Galligan told the Press Club that he hears those calling for “more immediate and punitive action” for LSU officials who have been accused of mishandling sexual assault and violence claims. But asked why no officials have even been placed on administrative leave while the investigation is ongoing, Galligan said he wants to wait for Husch Blackwell to paint a more complete picture of “who knew what, when” and what actions they took before he moves forward.

Multiple former LSU tennis players have said that they reported a teammate’s physical abuse at the hands of a football player to tennis coaches Mike and Julia Sell between 2017 and 2018, but that the Sells did not take action.

Executive deputy director of athletics Verge Ausberry has also acknowledged that he did not report an incident in 2018 when a football player texted him and admitted to hitting the tennis player, Jade Lewis. Ausberry said the football player, Drake Davis, recanted his confession after he called him. Davis was arrested later that year and pleaded guilty in 2019 to battery.

Ausberry continues to serve as one of 20 members on the LSU presidential search committee, which will ultimately decide if Galligan gets to take over the job permanently. Galligan has said he hopes to get the job. Asked Monday whether Ausberry’s continued role on the search committee poses a conflict of interest while Galligan oversees an investigation involving him, Galligan noted that he has no control over the search committee makeup.

“I would not let my candidacy in any way get in the way of this investigation or achieving justice in this case,” Galligan said.

While LSU waits on Husch Blackwell to wrap up its investigation, Galligan said that all employees are required to complete Title IX training before the end of the year. He emphasized that nearly every LSU employee is required to report instances of sexual harassment under Title IX, the federal law that prevents universities from discriminating on the basis of gender.

He said LSU will also evaluate a proposal they received Monday from the nonprofit Sexual Trauma Awareness and Response, known for its work with sexual violence victims across Baton Rouge. And he said more than 900 people attended a virtual forum that LSU held last week about the sexual assault allegations.

Galligan also addressed other challenges facing LSU this year, including the pandemic, racial injustice and fraternity hazing. He called on Congress to authorize more money for coronavirus relief, and said that the $13.5 million LSU has received through the CARES Act and an additional $5 million from the state have not come close to covering the university’s financial losses and extra expenses stemming from the pandemic.

“Simply put, our ability to continue operating without any major cuts hinges on securing an additional COVID-relief package from Congress,” he said.

Both the academic and athletic sides of campus are struggling financially. Galligan said the LSU Athletic Department is facing an $80 million budget loss. The department announced layoffs and pay cuts in October to help offset the shortfall. Revenue from football often helps offset most other sports at LSU, and Galligan said he hopes LSU will not have to shed any sports as they grapple with the cuts.

Going into the spring semester, he said LSU is weighing mandatory coronavirus testing policies, but added that it’s still to early to return to fully in-person classes again. He said he expects half of classes during the spring to be done virtually or hybrid in-person, and that most of those virtual classes will be delivered to students in real time.

LSU has agreed to pay Husch Blackwell up to $100,000 for the law firm’s review of how the university has handled past sexual violence and assa…

He said LSU will continue to emphasize the importance of mask-wearing, and that testing wastewater throughout campus for traces of coronavirus has helped LSU prevent widespread transmission of the virus.

“Wastewater testing has been a lifesaver to us,” Galligan said.