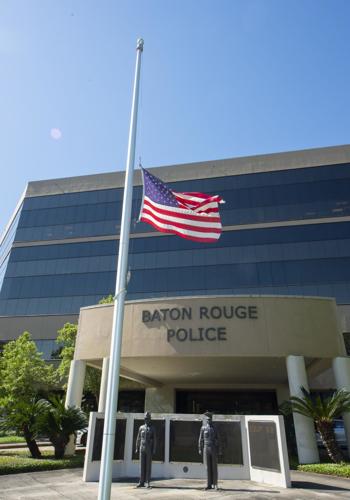 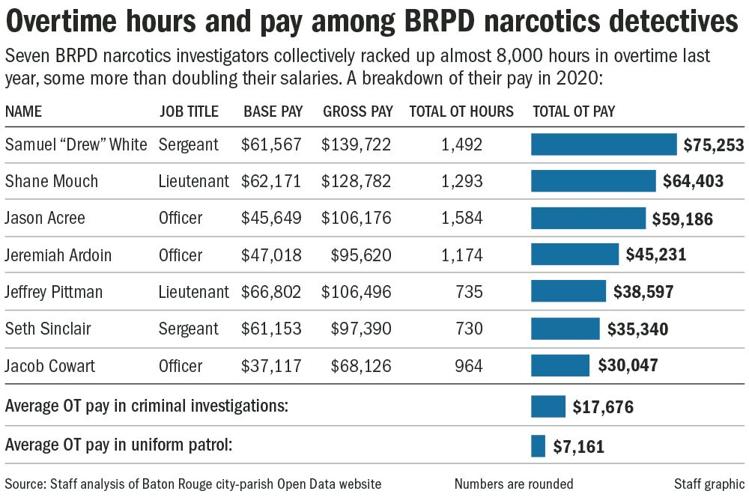 In the months leading up to a corruption probe into the Baton Rouge Police Department narcotics division, seven of its detectives later accused of wrongdoing were clocking on average over 60 hours a week.

Some more than doubled their base salaries at the expense of local taxpayers.

The detective who logged the most overtime in 2020 — averaging roughly 70-hour work weeks, or 1,600 extra hours for the year — was Jason Acree, who resigned from the department Tuesday after being arrested and accused of stealing marijuana from the evidence room.

That hectic schedule allowed Acree to take home $106,176 last year before his career came crashing down, a massive increase over his $45,649 base salary. Several of his colleagues similarly padded their paychecks with hundreds of overtime hours, according to an Advocate analysis of city-parish payroll records.

But the narcotics unit stands out for several reasons, not least because of the sheer number of hours worked.

The data raise questions about whether some officers were gaming the system, or whether their copious overtime represents a good-faith effort to deter crime as Baton Rouge gun violence surged in 2020.

Police Chief Murphy Paul said the ongoing corruption probe — which includes criminal and administrative investigations in addition to a sweeping audit of the narcotics division — will answer those questions.

"Were the dollars being used for their intended purpose? Are we working the types of cases we should be working?" Paul asked in an interview Thursday. "If the dollars were going toward disrupting and dismantling criminal organizations involved in violence, I don't think that would be a misuse of those funds. However, if they were not being used for their intended purpose, I would have concerns."

Paul said he already has concerns about division leadership, which is why he transferred all four supervising detectives to street patrols in March. He also suspended normal narcotics operations until the investigation runs its course.

"Narcotics work is extremely dangerous, and Baton Rouge has a lot of drug-related crime," he said. "It would be great if all the overtime was not needed, but unfortunately it is."

McLindon also noted that much of the narcotics overtime budget is covered using funds seized during drug raids, a fact the police chief confirmed. However, Paul said those funds are not allocated specifically to overtime for narcotics detectives; they could instead be used for other department expenses, including vehicle and equipment purchases.

The department has a blanket rule limiting officers to working no more than 16 hours per day, which still allows plenty of room for picking up extra shifts. That could include filling in for sick colleagues, pursuing time sensitive investigations, providing security for events or participating in special operations and patrols.

Convincing prostitutes to set up drug deals: The story of BRPD and its 'troll rips'

When a friend texted Christopher Gregoire asking for some weed, he agreed to smoke with her and arrived at her Baton Rouge hotel room about 20…

The corruption probe was launched after one narcotics detective, Jeremiah Ardoin, was arrested in December for allegedly buying stolen property. He then decided to cooperate with BRPD internal investigators.

In a written memo sent to the chief, Ardoin accused his colleagues and supervisors of more serious misconduct. He said narcotics officers routinely stopped and searched Black people without probable cause, planted drugs on suspects and coerced prostitutes into setting up drug dealers.

He also specifically accused some other detectives of taking advantage of the high homicide rate to create more overtime assignments.

"I got tired of them wishing more black and brown people in the community would die so that they could fill their pockets," Ardoin wrote in a second memo recently provided to the chief. He said the officers were trying to support "their hunting camps, new trucks and houses at the expense of the black and brown community."

After BRPD corruption probe halts 100+ cases, will narcotics officers change who they arrest?

Ardoin was the only Black member of the narcotics division until he resigned last month.

BRPD leaders getting heat over their overtime pay is nothing new, but East Baton Rouge Mayor-President Sharon Weston Broome said the recent scandals add weight to the present concerns.

The BRPD overtime budget has hovered between $8 million and $9 million for the past few years, though officials said about 20 percent is reimbursed through federal grant dollars, which cover some specific initiatives such as DWI checkpoints.

"I take what has been happening within the narcotics division very seriously," Broome said, noting that the ongoing investigations will bring more clarity. "We're going to take that information and not only address the overtime issue, but any other issues we think need to be addressed."

Before the fallout started, the narcotics division had 12 detectives. Since then, two have been arrested, four reassigned to uniform patrol and one put on administrative leave. Those seven officers collectively racked up almost 8,000 hours of overtime in 2020 — tacking on about $50,000 apiece to their individual salaries.

After a Baton Rouge police officer was accused of purchasing stolen electronics several weeks ago, he sat down and drafted a memo alleging wid…

They worked way more overtime than the vast majority of BRPD officers, including detectives in other special divisions. Average overtime earnings for members of the criminal investigations division, which includes narcotics, came to about $17,700 in 2020. For uniform patrol, the average hovered around $7,200.

Experts and officials have already raised concerns about the narcotics division focusing too much on low-level arrests and failing to conduct large-scale drug trafficking investigations aimed at taking down major dealers.

Plus, local law enforcement officers were specifically instructed to avoid minor arrests during the pandemic to curb the jail population and minimize the spread of COVID behind bars.

Some narcotics officers nonetheless worked significantly more overtime in 2020 than preceding years, records show. In particular, Acree increased his annual overtime pay from about $37,000 in 2018 to $59,000 in 2020.

Two supervisors, Shane Mouch and Samuel "Drew" White, also saw increases of more than $20,000 and $30,000 in their respective overtime earnings between 2018 and 2020. Both more than doubled their base salaries last year and took home well over $100,000 in gross income.

In his first memo to the chief, Ardoin claimed one supervisor would joke about hoping for a higher murder rate because "the more homicides there were, the more money he would be able to make" through overtime.

Creating overtime assignments for narcotics detectives in response to homicides makes little sense unless officers have good reason to believe a certain murder was directly tied to a drug investigation, according to the police chief.

The salary data adds to a growing pile of evidence that suggests the narcotics division operated largely in a bubble without much oversight — until the recent scandals cast a harsh light on the unit.

The narcotics commander is responsible for regulating overtime in the division, the chief said. But Paul also noted that his recent push to create a fourth deputy chief position should help close possible gaps in oversight within the criminal investigations division, the umbrella that contains narcotics and other specialized units.

The parish Metro Council granted the request for an additional deputy chief in December, and the position was recently filled.

Before the change, one deputy chief was tasked with overseeing both criminal investigations and uniform patrol, which together account for a large majority of BRPD manpower. Paul said he believes that was too much for one supervisor, a conclusion shared by independent consultants who completed an efficiency study of the department.

As the investigations move forward, Paul said he wants the public to understand that his administration hopes to leave no stone unturned. But he also warned against jumping to conclusions, emphasizing the need to thoroughly examine the evidence.

In addition to the memos from Ardoin, BRPD leadership has received other complaints from inside and outside the department, all of which are being rolled into the investigations underway, Paul said.

"The last thing good police want is bad police around them," he said. "We want to get to the bottom of this and move on."

After he was arrested twice in recent months and accused of stealing drugs from the evidence room, a narcotics detective resigned Monday from …