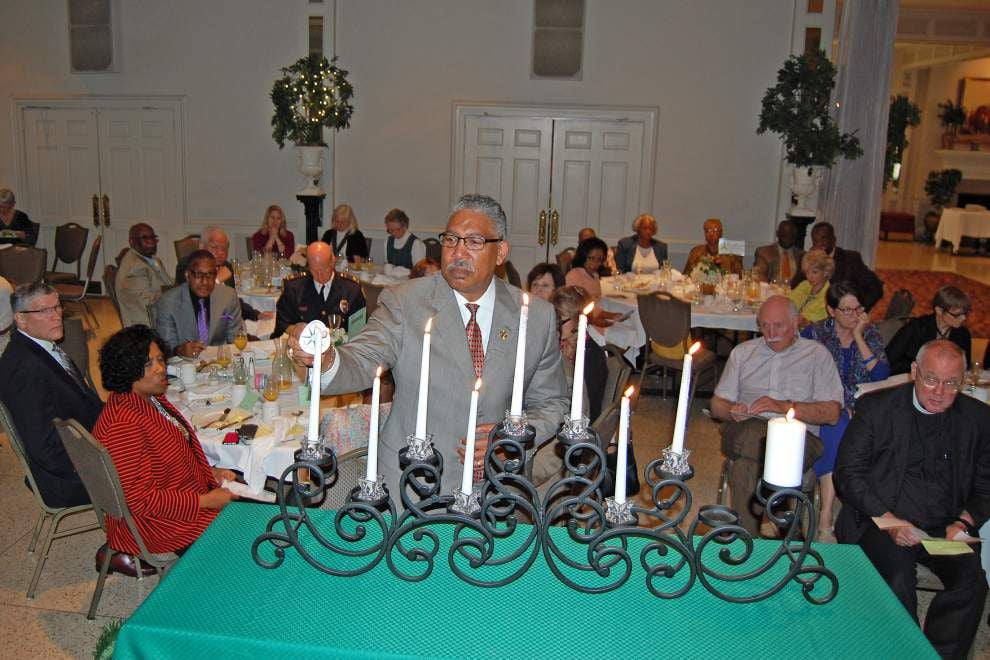 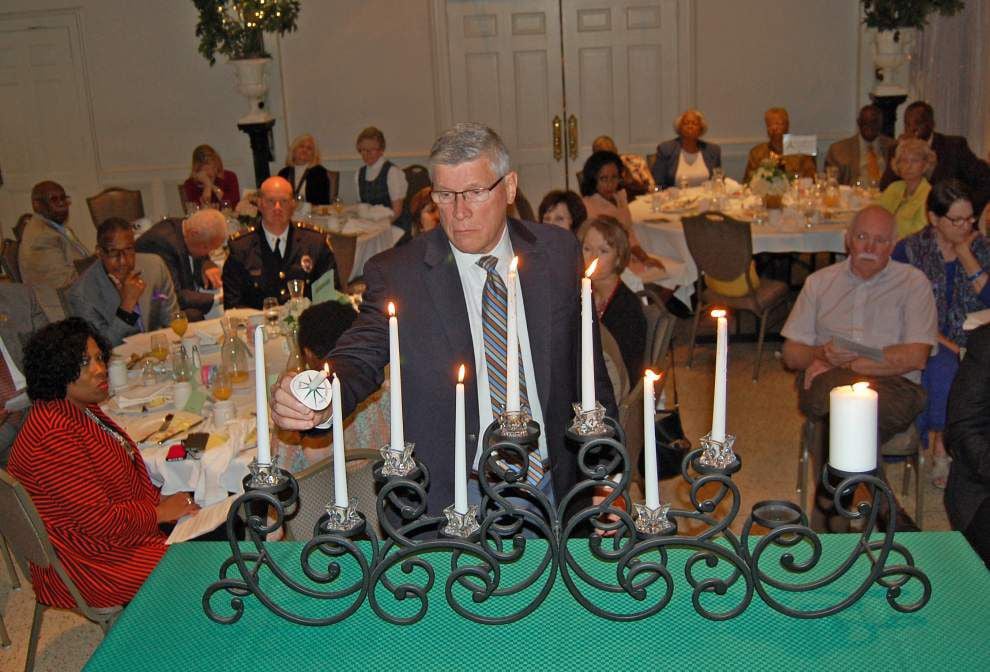 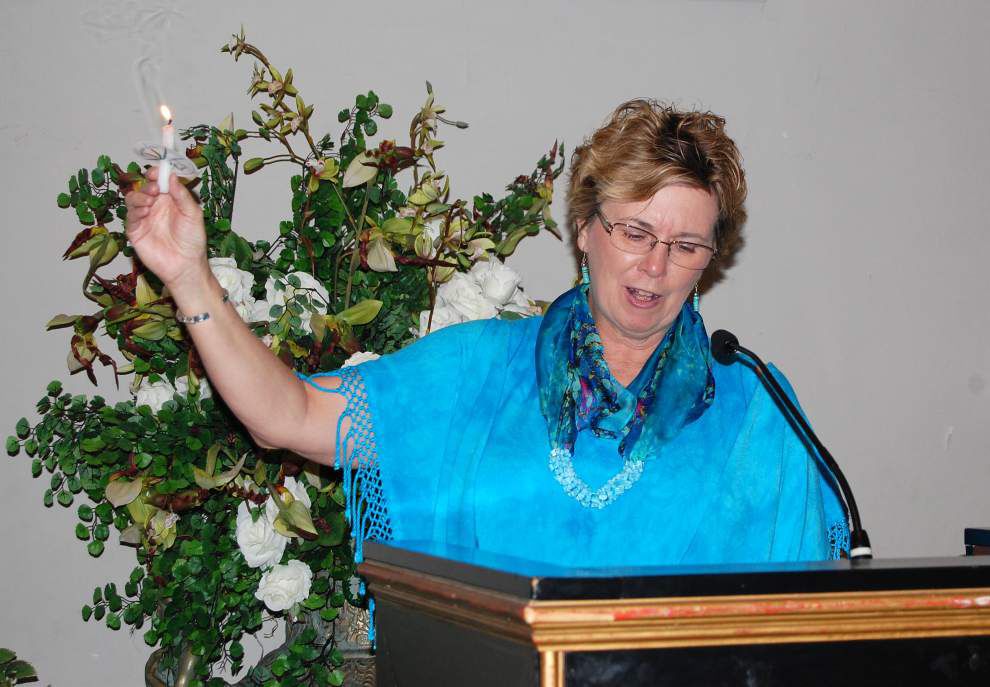 Photo by Mark Hunter -- The Rev. Robin McCullough-Bade, executive director of the Interfaith Federation of Greater Baton Rouge, leads about 200 attending the 27th Community Prayer Breakfast in the closing song, "Let There be Peace on Earth." 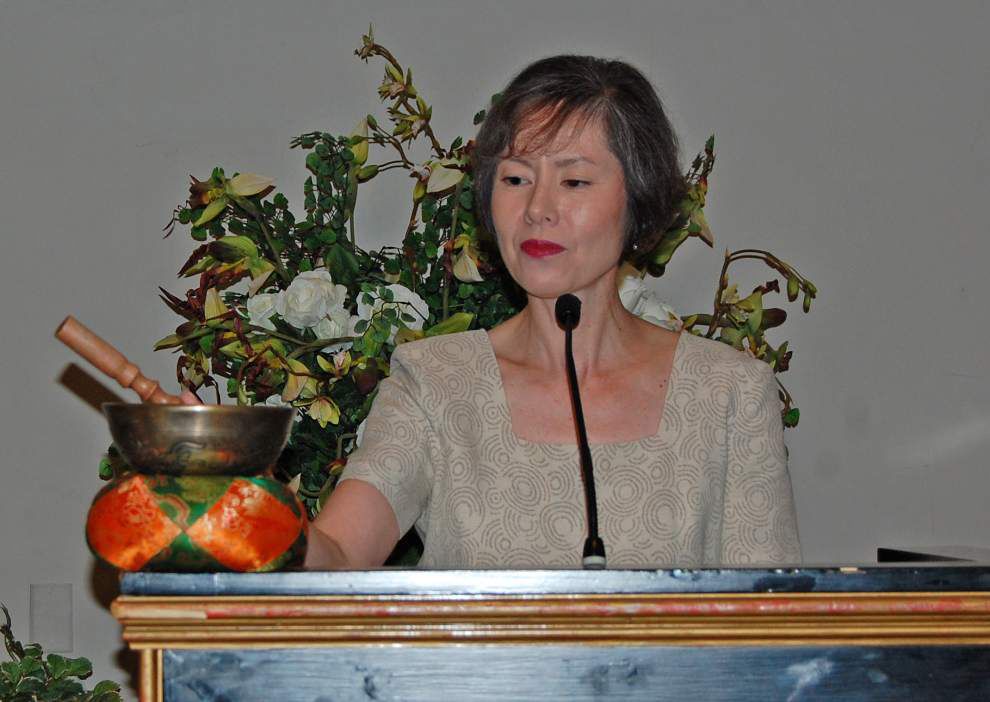 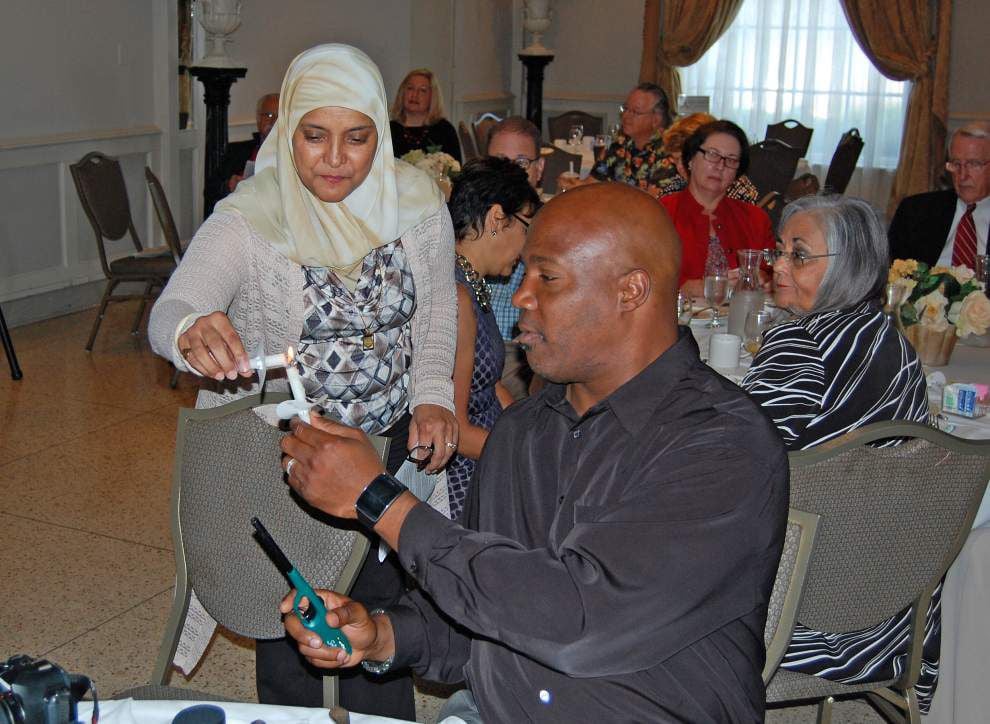 Photo by Mark Hunter -- The Rev. Robin McCullough-Bade, executive director of the Interfaith Federation of Greater Baton Rouge, leads about 200 attending the 27th Community Prayer Breakfast in the closing song, "Let There be Peace on Earth."

Prayers for personal, local and world peace were offered and candles were lit Wednesday by more than 200 faith and community leaders at the Interfaith Federation of Greater Baton Rouge’s 27th annual Community Prayer Breakfast.

“This is pretty unique — to be in the Deep South, to have an interfaith organization, a federation of congregations of such diversity,” said the Rev. Robin McCullough-Bade, the federation’s executive director, at the breakfast at Boudreaux’s.

The faith groups listed on the program reflect the diversity in the community, as evidenced during the event by the sounding of a Buddhist bell by Nancy Bourg, co-chairwoman of the World Peace Day Committee; an opening litany by Rabbi Jordan Goldson, a board member and rabbi for Congregation B’nai Israel; and a brief greeting that included several biblical references by East Baton Rouge Parish Mayor-President Kip Holden.

“When God looks at people, he doesn’t divide us into colors, races, religions or any of those things,” Holden said before the meeting began.

His official city-parish letterhead displays the slogan “One Baton Rouge is Better,” he said, “and this (meeting) shows it.”

Goldson agreed, saying the meeting provided an opportunity for the city’s religious leaders to get to know one another.

“Once we know each other, we are able to develop friendships and achieve peace in our community and in our world,” Goldson said.

The featured speaker, Mary Jones Wade, an ordained Baptist minister, writer and poet from Philadelphia, is also a member of the Nobel Peace Prize Nominating Committee for the American Friends Service Committee.

“My Baptist friends call me a Quaker and my Quaker friends say they don’t know what to call me,” Wade said, eliciting a laugh from the audience.

“I am a Christian, I am a Muslim, I am a Jew, I am a Sikh,” she said. “When we call that name, very often that name becomes a source of division.”

That division, she said, leads to wars, and then she related how she was honorably discharged from the U.S. Army during the Vietnam War after serving only eight months because she continually questioned her superiors about it. “So many innocent young men died,” she said.

Wade said there is a war going on in the streets of Philadelphia, indicated by young men standing on corners, selling drugs because they can’t find a job.

“It is an explosive situation,” she said. “There is no real unity in Philadelphia — is there real unity in Baton Rouge? Can we talk to each other with open hearts?”

She talked about the young white man who walked into the Emanuel African Methodist Episcopal Church in Charleston, South Carolina, in June and shot a group holding a prayer meeting, a crime that sparked demonstrations across America.

“He had been taught to hate,” Wade said. “Instruction is how we become divided — it is how we learn to hate each other and fear each other.”

Wade said she is a “disciple of Christ.”

The Rev. David Chisholm, pastor of First Christian Church; federation President Niloufer Mohamed, a member of the Islamic Center of Baton Rouge; and the Rev. Linda Reed, of St. Mary’s Baptist Church and past federation president, led the audience in a series of nine prayers for various aspects of society and culture while community leaders lit nine candles on a large candelabrum.

Everyone then lit his or her neighbor’s small candle, lighting up the entire room. They closed by singing in unison the classic “Let There Be Peace on Earth.”

“This is one of the most inspiring events I’ve ever been to,” said East Baton Rouge Parish schools Superintendent Warren Drake, who lit the seventh candle for educators.

He said the School Board’s theme this year has been “One Team, One Mission.”

“That’s what this is — we all have to work together. We cannot do it by ourselves,” Drake said.

The Rev. Linda Reed, a former federation president, said she had a response to Wade’s question of Baton Rouge’s unity: “We tend to get along better, especially when there is a crisis. Our unity stands out in love.”