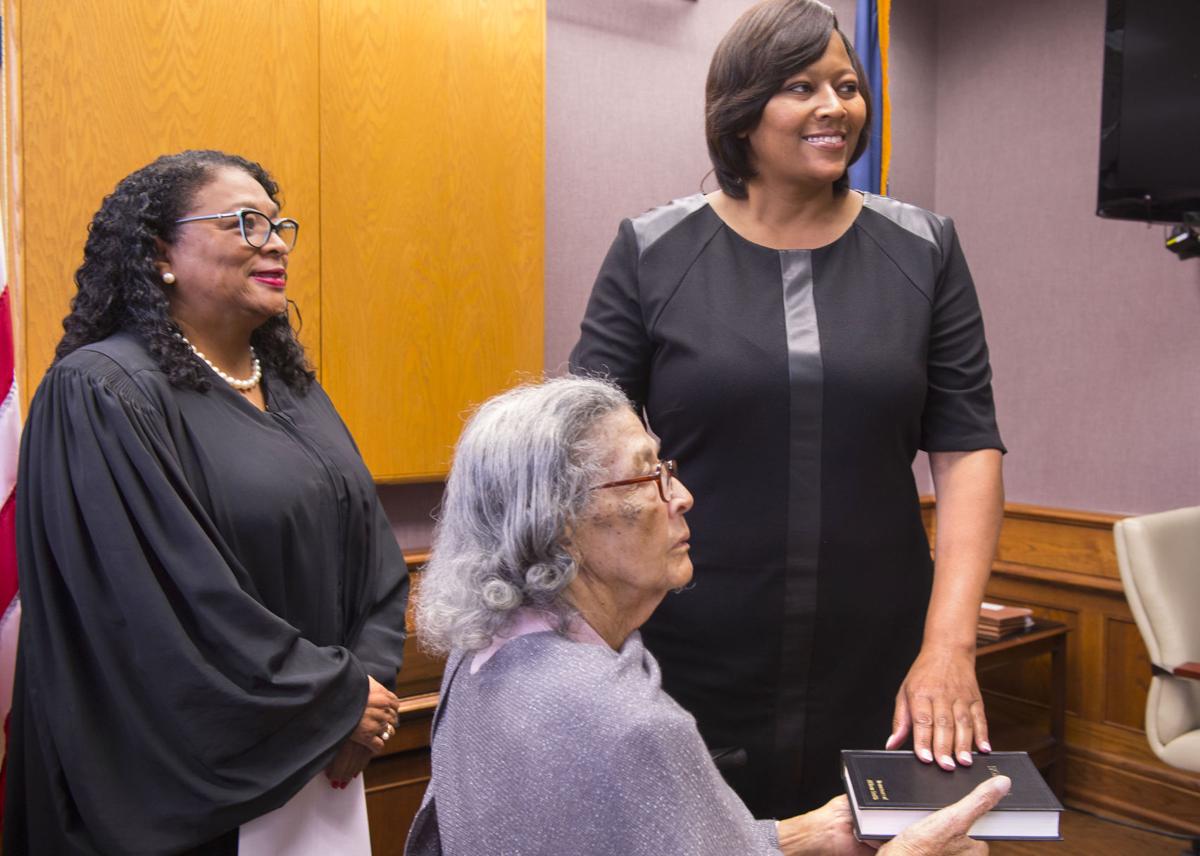 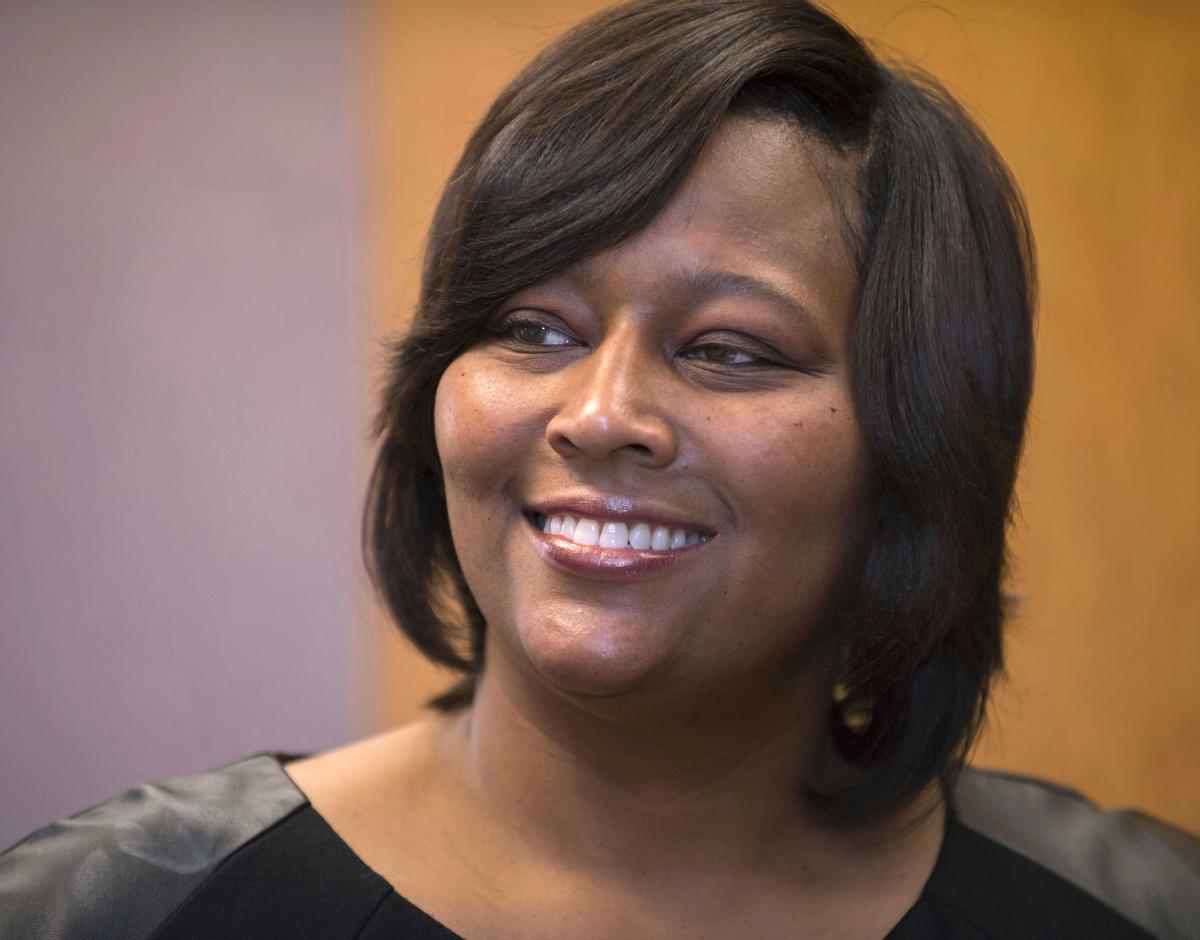 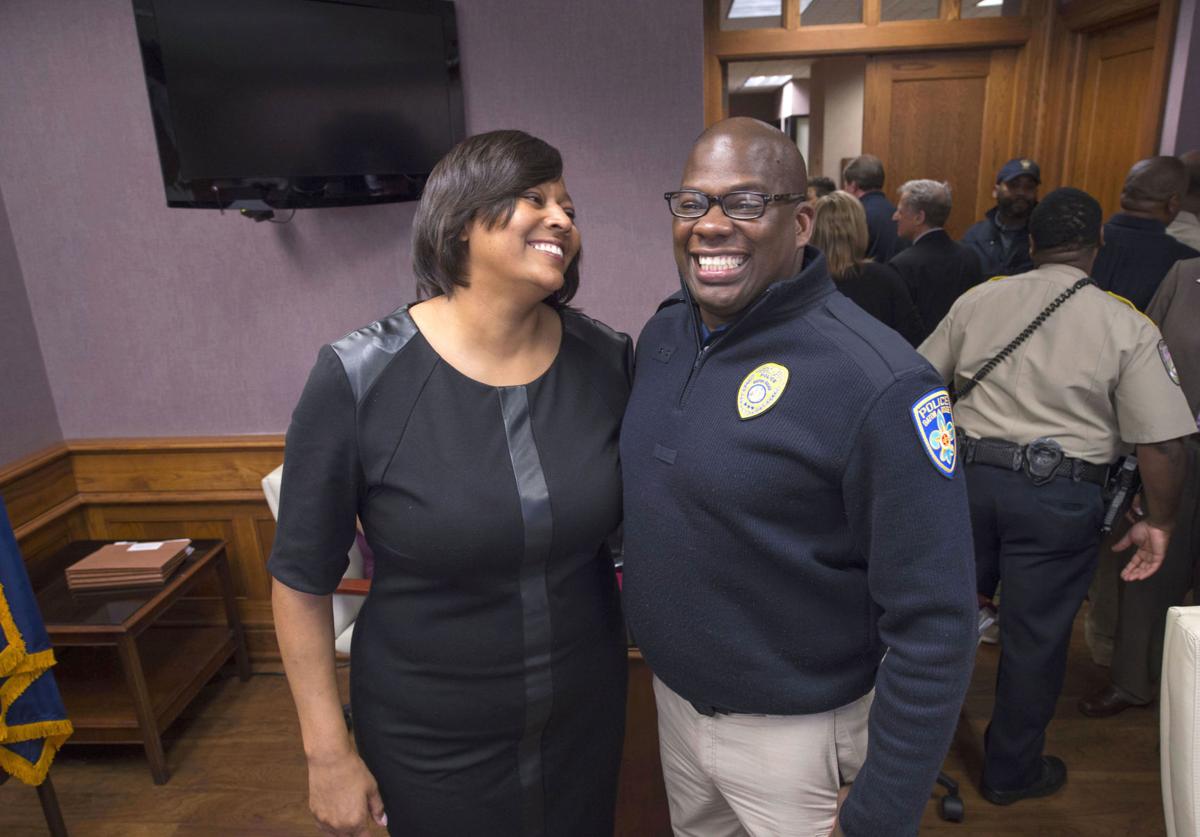 Terrica Williams, left, beams a smile at Baton Rouge Police Chief Murphy Paul, right, as he grins while standing on his tiptoes to try to equal her height, as they pose for a souvenir photo after her swearing in ceremony as the new Baton Rouge City Constable, Tuesday, Dec. 18, 2018 in the City Court building. 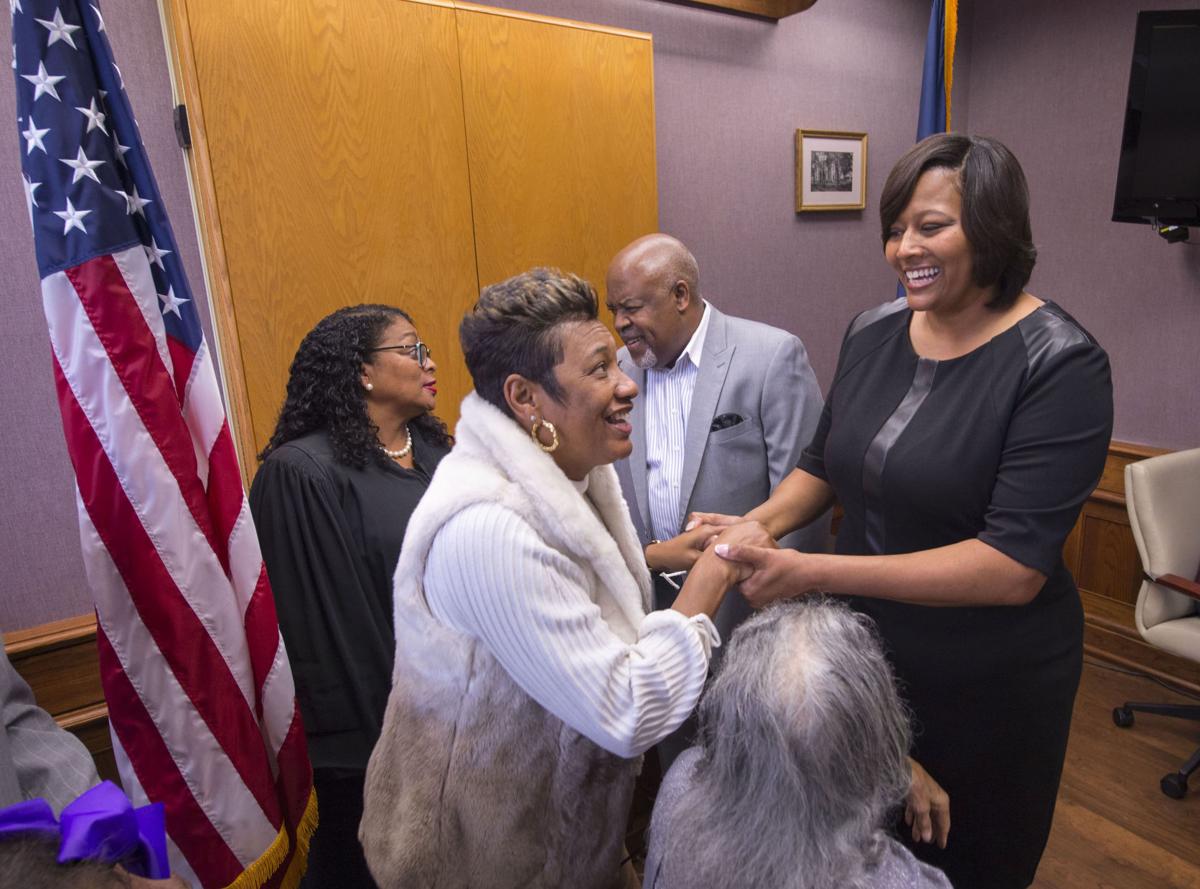 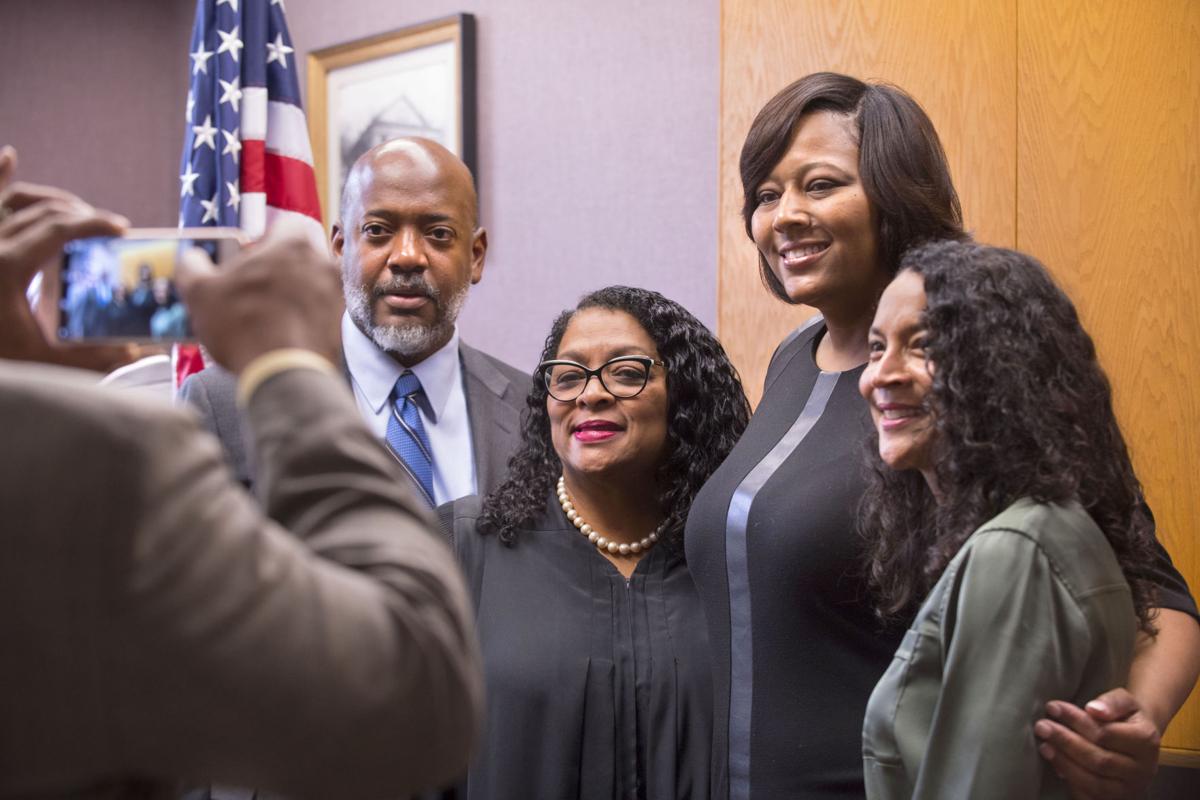 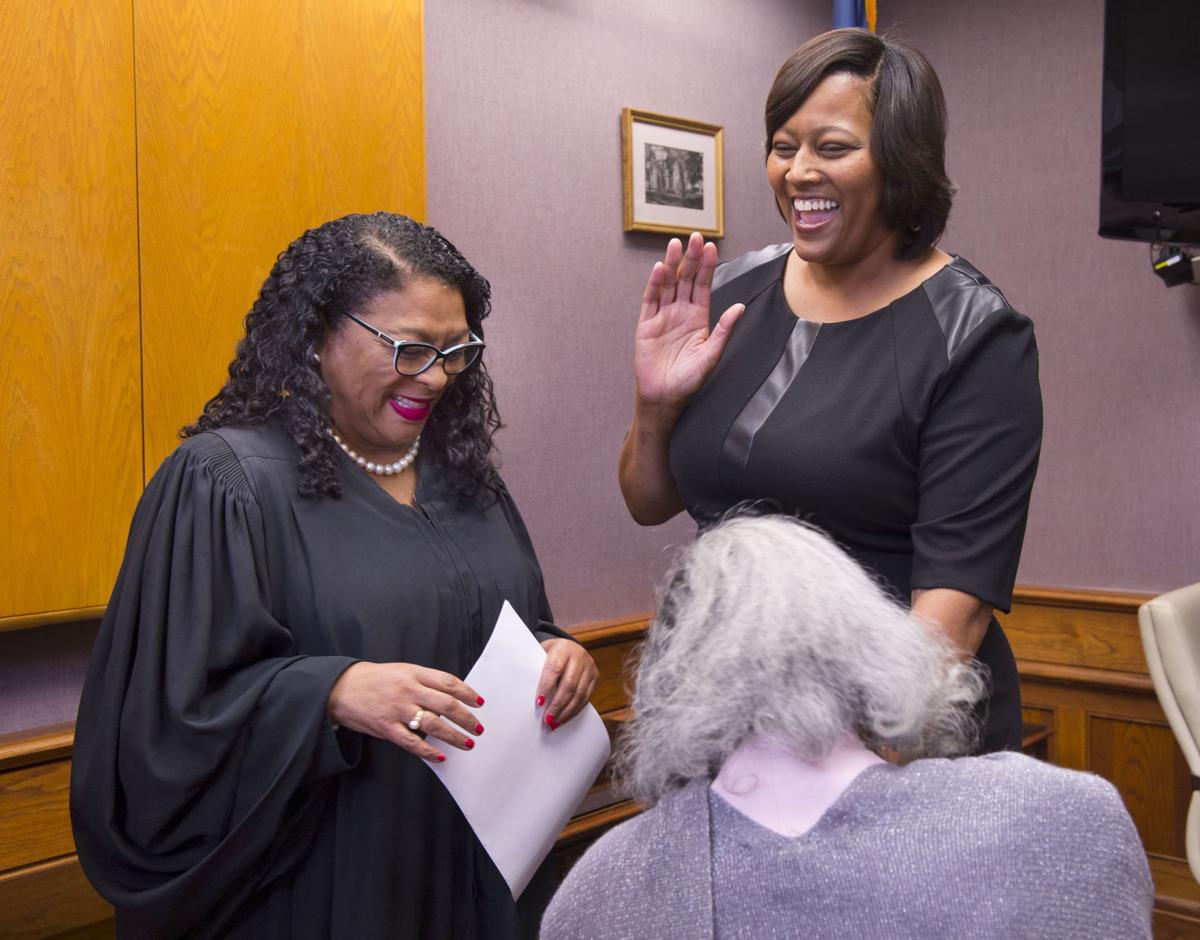 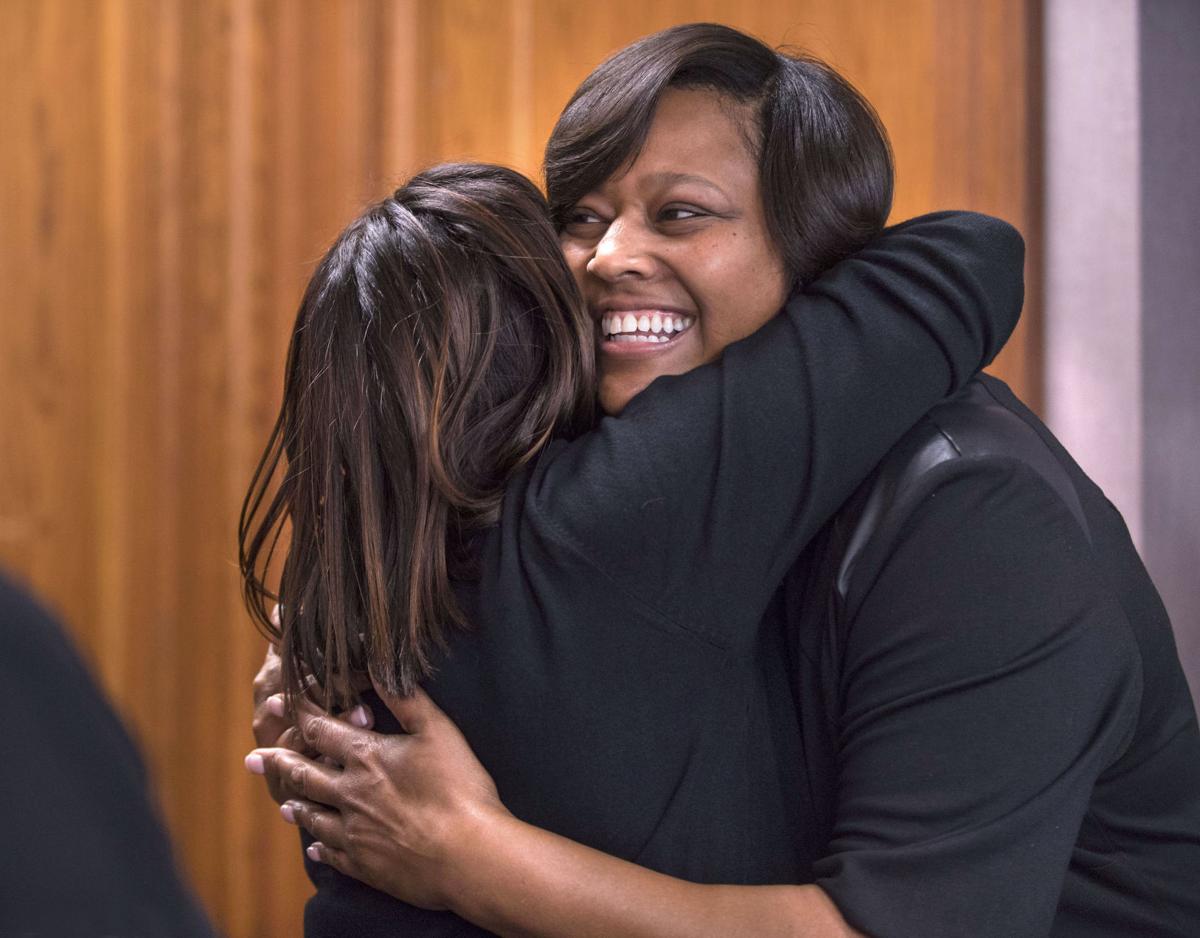 Terrica Williams, right, hugs a supporter before the swearing in ceremony for Williams, the new Baton Rouge City Constable, Tuesday, Dec. 18, 2018 in the City Court building. 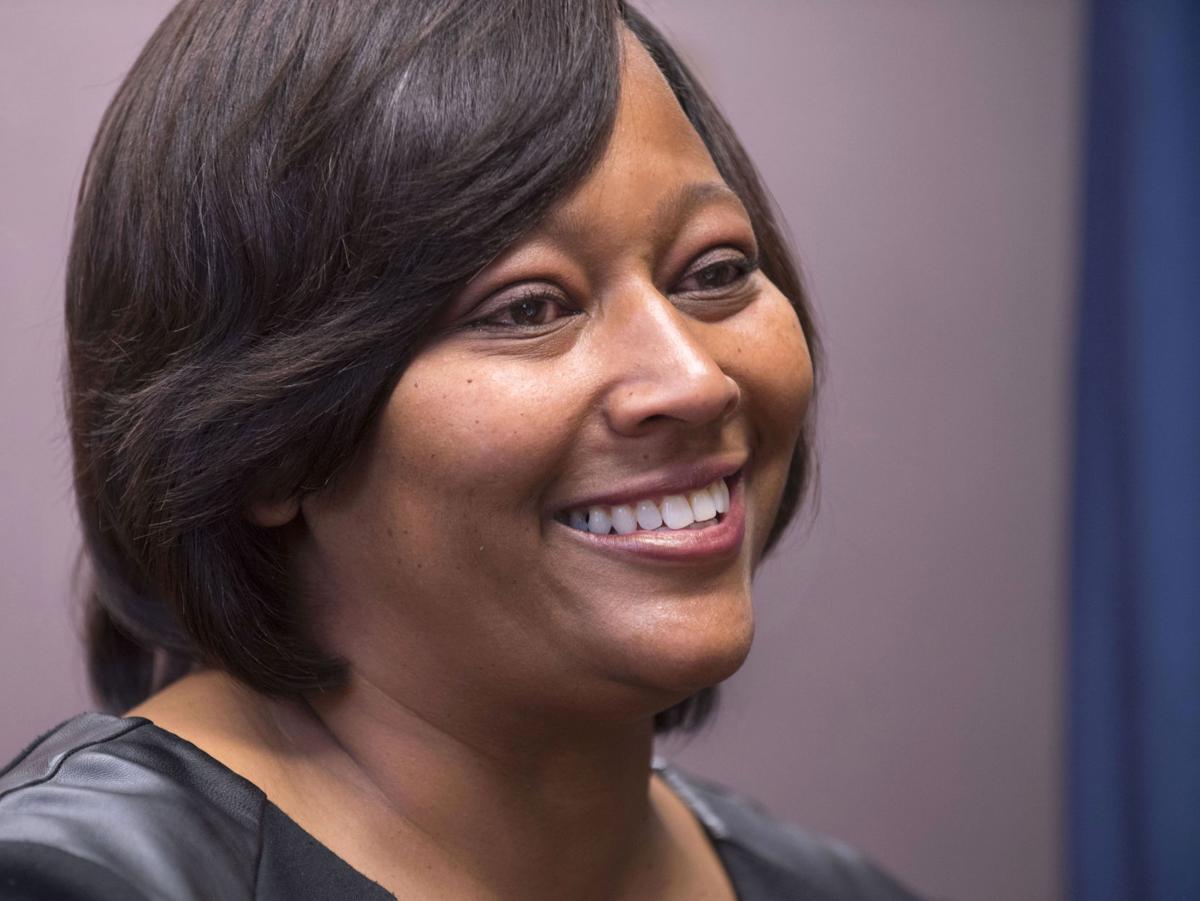 Terrica Williams, left, beams a smile at Baton Rouge Police Chief Murphy Paul, right, as he grins while standing on his tiptoes to try to equal her height, as they pose for a souvenir photo after her swearing in ceremony as the new Baton Rouge City Constable, Tuesday, Dec. 18, 2018 in the City Court building.

Terrica Williams, right, hugs a supporter before the swearing in ceremony for Williams, the new Baton Rouge City Constable, Tuesday, Dec. 18, 2018 in the City Court building.

Five years after making a claim of gender discrimination against the Baton Rouge City Constable's office, Terrica Williams returns to the agency on Wednesday as the first woman in city history to lead the office.

Williams, who previously worked in the constable’s office from 2009 to 2013, is taking the top spot from Constable Reginald Brown, who served in the office since 2001 and did not seek re-election. Williams, a Democrat, was elected Dec. 8 in a runoff against Republican candidate Gordon "Trey" Bargas. She is the first woman to head the law enforcement arm of the City Court, since the position was created in 1944.

“I’m excited. I’m so ready to get back to what I love doing,” said Williams, 46. “Just walking through the halls, I feel comfortable, at ease and know this is a great opportunity for myself and the employees.”

Williams had resigned from the constable’s office in December 2013 after making claims of gender discrimination against the administration. She filed a lawsuit against the agency in state 19th Judicial District Court in spring 2015. The case, which was later moved to the federal Middle District Court of Louisiana, was settled in November 2016.

In court documents, Williams alleged that, while the office’s first female jail sergeant, her superiors repeatedly overruled her discipline of deputies in the city jail. In its answer, the constable’s office alleged they supported her authority and career development, and depositions from employees showed superiors tried to convince Williams to stay.

Court documents also note her only disciplinary history was a 30-day suspension in 2010, which Williams served for interfering in a city police investigation.

The investigation was a traffic stop of her son, which Williams witnessed while patrolling for the constable’s office. Williams said her son was stopped because his vehicle resembled a car officers were searching for and he was later released. According to documents and her account, she stopped to ask the officers what was happening when she saw them searching the vehicle on the roadside.

Williams, a single mother, said in a text message to The Advocate she told her superiors “I was a parent before I became a police officer” and wouldn’t have changed how she handled the situation.

But the suspension apparently did not affect her career with the agency: Williams was promoted to jail sergeant in 2012 and received merit pay increases each year after the promotion.

Ronald Robertson, pastor of Capital Missionary Baptist Church, said Williams, whom he’s known 15 years, is driven by a combination of compassion for others, a no-nonsense approach to executing her work, and a commitment to fairness.

Robertson also notes Williams has a soft spot. A natural-born servant, she is proactive in caring for others, he said. No matter the church event, Williams is always the first person to volunteer or step up to serve others.

“I feel like the city of Baton Rouge has been blessed because they’re now about to receive what we’ve been receiving at the Capital Church,” Robertson said.

Williams is also involved in charity work outside of the church, spearheading a group of residents she calls Baton Rouge Proud — We Are One to serve the homeless and others during times of hardship. The volunteers have provided Thanksgiving and Christmas meals to the homeless, participated in toy drives and assisted in relief efforts after Hurricane Harvey decimated Houston.

Her compassion is joined by an admirable work ethic, strength and self-confidence, said Anita Haywood, Williams’ fourth-grade teacher from South Boulevard Elementary School. Haywood said Williams has determination and grit. When she was a junior at Glen Oaks High School, her mother died, but she didn’t let the tragedy derail her, Haywood said. She continued to work hard.

Williams has carried herself with purpose ever since she was a young girl, her teacher said.

“She always kept her head up high, like someone had told her she was the tallest because God had made her that way for a special reason,” Haywood said.

Williams said she’s continued to be a “worker bee” in her adult life. Williams has worked in both law enforcement and the private sector, serving with the East Baton Rouge Parish Sheriff’s Office and the state Department of Corrections before joining the constable’s office. She’s also worked in private security for casinos and as a sales associate at retail stores.

Most recently, Williams worked as a school bus driver for East Baton Rouge Parish schools. This past summer, during school break, Williams picked up a second job at Classic Bridal and Limousine Service on Greenwell Springs Road. When she decided to run for the constable’s position, she said, she went to qualify while on lunch break from the store.

She continued working during her campaign, driving school buses in the early mornings and evenings and walking neighborhoods in between. On Sundays, Williams, a faithful Baptist, visited churches, prayer groups and worship concerts from sunrise to sunset, she said.

“By going to the different churches, I kept God in the middle of my campaign,” Williams said.

Williams recalled an afternoon when she received a call from a resident questioning if she had visited Park Vista subdivision. She hadn’t and decided to stop by after a formal campaign event. She switched out her heels for flip-flops, took off her blazer and walked through the neighborhood, knocking on doors and introducing herself to residents, Williams said.

Her visits involved raising awareness about the constable’s work, which includes serving as law enforcement for the city court, enforcing court orders such as evictions and warrants, operating the city jail and participating in community programs.

Williams also spoke about her ideas for the agency, including clearing the court’s backlog of bench warrants through collaboration with judges and the community, considering body cameras for officers and strengthening the agency’s relationship with the community.

Williams said her predecessor, Reginald Brown, was “great about making sure the constable’s office was in line and in connection with all areas of law enforcement,” and she plans to do the same.

No matter what, she said she plans to bring team spirit and a devotion to her employees to her work. Each day, Pastor Robertson tells Williams to “be the best Terrica in that position every day,” and that’s her goal, Williams said.

It all started with a question: What did people who had nowhere to go do on Thanksgiving?

Editors note: This story was updated to include that Williams is the first woman to serve as city constable. At the time of publication, historical information from the office had not been confirmed.