Photo provided by the Louisiana Environmental Action Network - Open burning of explosives at the Clean Harbors facility outside the town of Colfax in Grant Parish, as seen in an undated photograph. The state Department of Environmental Quality recently said it plans to deny the companyÕs hazardous waste permit without more analysis of alternative technologies that donÕt involve open burning. A Massachusetts based company, Clean Harbors has its regional operations off Scenic Highway in Baton Rouge. 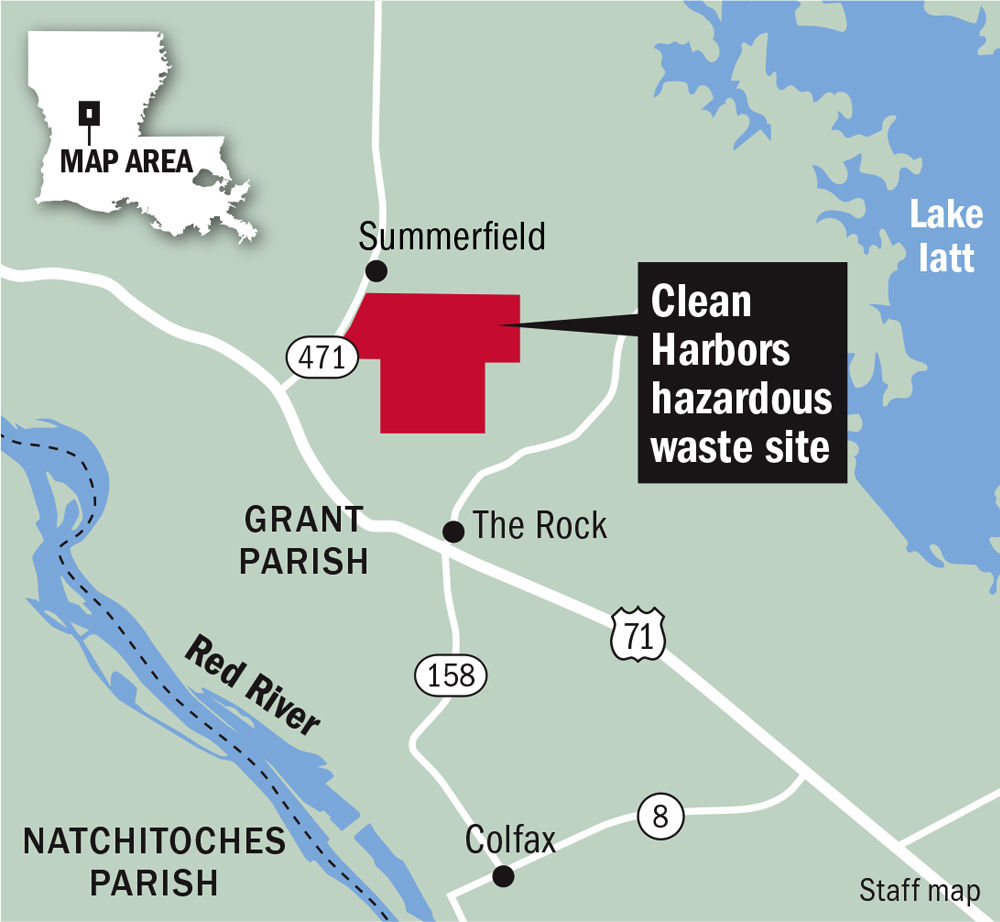 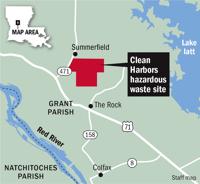 Photo provided by the Louisiana Environmental Action Network - Open burning of explosives at the Clean Harbors facility outside the town of Colfax in Grant Parish, as seen in an undated photograph. The state Department of Environmental Quality recently said it plans to deny the companyÕs hazardous waste permit without more analysis of alternative technologies that donÕt involve open burning. A Massachusetts based company, Clean Harbors has its regional operations off Scenic Highway in Baton Rouge.

State regulators are threatening to deny a vital permit to a company that burns and detonates explosive material in the open air in North Louisiana — unless the company considers other, more environmentally safe ways of doing business.

In late 2014 and 2015, the facility received the residue of a massive munitions bunker explosion at the Louisiana Army National Guard's Camp Minden about two years earlier. The company was burning off the trace explosives left on the debris.

The current owner is a company called Clean Harbors, which has regional headquarters in Baton Rouge.

The rate of permitted burning, which happens during daylight hours, has increased more than thirteen-fold since the facility first opened, permit records say.

Residents in the "The Rock" community in Grant Parish began to hear loud explosions that shook homes after the Camp Minden residue came to the complex, said lifelong Colfax-area resident Brenda Vallee. In the years since, they have repeatedly reported black plumes of smoke wafting into their communities and surrounding area.

Numerous residents and regional environmental groups have since filed complaints about Clean Harbors' open burning and detonation of explosive materials from the U.S. Department of Defense, defense contractors, Disney and others. Among them are the Louisiana Environmental Action Network based in Baton Rouge and retired U.S. Army Lt. Gen. Russel Honore' and his Green Army.

They have sought to halt the open burning practices over fears of health and environmental impacts from the leftover chemical residues wafting in the air and seeping into the groundwater.

"What we're asking for is a clean alternative to what they're doing," said Vallee, who lives down the road from the plant and helps lead a community group, Central Louisiana Coalition for A Safe and Healthy Environment.

“The method they are using," she said, "is the cheapest and the oldest method available."

Earlier this month, the state Department of Environmental Quality said it planned to deny Clean Harbors the renewal of its hazardous waste operating permit, saying the company failed to adequately consider other technologies besides open burning. The permit is one of several the company needs to continue to run the facility.

DEQ has repeatedly cited Clean Harbors over alleged violations of its permits during the company's daily operations. Many of those claims are pending.

State regulators say traces of perchlorate and other telltale chemicals from the explosives are on the soil surface and in the shallow groundwater under Clean Harbor's 743 acres of wooded property that contain the operation. A contaminated and leaking rainfall retention pond on site also had to be closed in recent years and the company says it has been doing air monitoring for a few years.

Though the regulators say there aren't indications the contaminants have gotten off the larger company site in concentrations that pose a health risk, residents complain of chronic thyroid conditions and more acute respiratory and skin ailments that some health studies link with exposure to perchlorate and other chemicals.

Clean Harbors officials said they plan to use the public comment period to present DEQ with a plan for a possible "global settlement" that, they say, would address the concerns of residents and DEQ and the pending violations.

Phil Retallick, Clean Harbors' senior vice president of compliance and regulatory affairs, said the company has recently undertaken significant engineering study and is trying to set up a meeting with DEQ in the coming weeks to discuss a series of proposed improvements.

"We have done some technological evaluations and analysis, and we want to be in a position to sit down with the state and share the results of the studies and findings that we have as part of a discussion of how to resolve the whole matter with the DEQ and with the community as well," Retallick said. "I think the community will benefit from some of the proposals that we're going to share with the state."

He declined to say what those improvements were, saying they weren't fully developed yet but were "very, very close."

In the April 2017 permit application to DEQ, Clean Harbors reported that enclosed technologies like a rotary kiln or a deactivation furnace could be used for some, limited types of explosives but would not be safe for workers for other explosive materials that Clean Harbors handles at the Colfax operation.

In DEQ's notice of denial, Elliott Vega, the agency's assistant secretary of environmental services, wrote that the company appeared to focus on the "portion of its waste stream" with the apparent safety limitation and failed to do the required balancing of environmental and economic impact to assess other treatment options more fully.

"The LDEQ acknowledges that there may be a portion of the wastes managed at the Clean Harbors facility for which open burning/detonation is the only viable option," Vega added. "However, the LDEQ finds that Clean Harbors cannot rely on these waste streams to avoid any analysis of alternative methods where such methods could be safely employed."

In response to Retallick's comments, Vallee noted that Clean Harbors has had plenty of time to tell DEQ about alternatives in a timely manner and hadn't yet. DEQ's denial notice says this as well. Vallee said she will wait to see what Clean Harbors proposes.

"I don't think we're asking for something unreasonable. I know it costs money. Some of the company officials have told me money is not the problem," Vallee said.