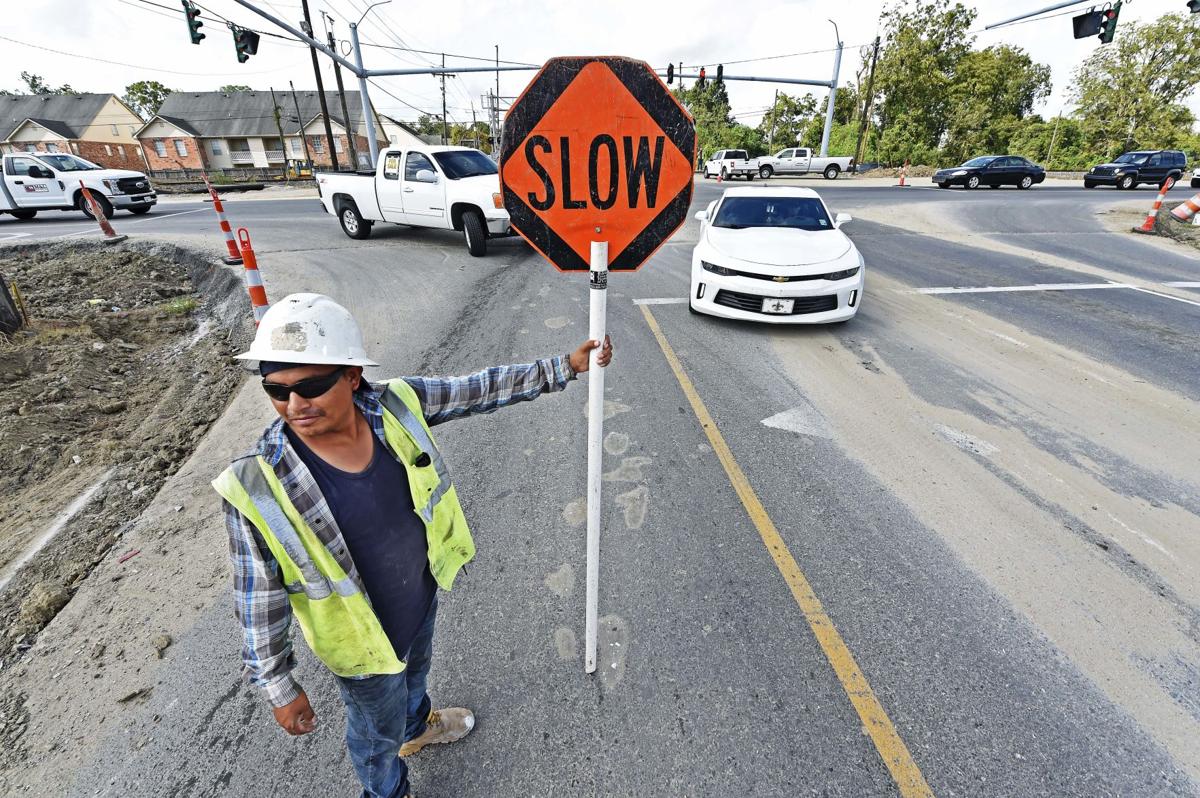 Keeping an eye on the situation, Juan Garcia slows the vehicles roll to a stop with a flip of his sign at the intersection of W. Lee Drive and Nicholson Drive Monday Oct. 7, 2019, in Baton Rouge, La. Motorists were slightly delayed so a truck could dump its load at the construction site as work continues to improve the heavily traveled intersection.

Keeping an eye on the situation, Juan Garcia slows the vehicles roll to a stop with a flip of his sign at the intersection of W. Lee Drive and Nicholson Drive Monday Oct. 7, 2019, in Baton Rouge, La. Motorists were slightly delayed so a truck could dump its load at the construction site as work continues to improve the heavily traveled intersection.

Driving on Baton Rouge’s crumbling, congested roads costs the average motorist around $2,300 annually, according to a new study from a Washington D.C.-based transportation nonprofit.

That number includes higher vehicle operating costs from traveling on rough roads, lost time and wasted fuel from sitting in traffic, and the financial toll of traffic crashes. On the whole, Louisiana’s deteriorating infrastructure costs the state’s 3.4 million drivers $6.9 billion annually, according to TRIP, a group sponsored by transportation-related industries.

The report determined that 36 percent of Baton Rouge’s roads are in “poor” condition and another 25 percent are in “mediocre” condition. The potholes, rutting and rocky surfaces that come with inadequate roads lead to increased tire wear, accelerated vehicle depreciation and additional repair costs.

The study found that Baton Rouge’s drivers lose as many as 58 hours per year sitting in congestion, or just more than an hour per week. The increasing levels of traffic robs commuters of time and money and imposes increased costs on businesses, shippers and manufacturers, it said.

Between 2013 and 2017, a total of 3,683 people were killed in Louisiana traffic crashes. Deficient roadway features — like lane widths, lighting and guard rails ⁠— contributed to approximately one-third of those fatalities, the report said.

The report also found that 19 percent of the city’s bridges ⁠— 115 structures in total ⁠— are in a poor or structurally deficient condition. That doesn’t mean they’re unsafe to drive on, but it can lead to restrictions on vehicle weights and force commercial and emergency vehicles to use alternate routes.

The study also highlighted the economic necessity of fixing roads before they require major repairs. Reconstructing roads costs approximately four times more than resurfacing them, according to Carolyn Bonifas Kelly, associate director of research and communications at TRIP.

TRIP, a national transportation research nonprofit, is sponsored by insurance companies, equipment manufacturers, labor unions, and engineering and construction firms. It was initially founded as "The Road Information Program" but now uses only its acronym because it works in other areas.

“Without adequate transportation funding, Louisiana and the nation will lose their competitive edge and the state’s transportation system will become increasingly deteriorated and gridlocked,” Kelly said.

The sponsor of a long-shot bid to increase Louisiana's gas tax shelved his own proposal Monday.

Randy Cangelosi, board chairman of the Baton Rouge Area Chamber, estimates the state needs at least $500 million annually to fund infrastructure maintenance projects. He said policymakers are failing the state in continuing to “kick the can” down the “crowded and crumbling road” on finding a source for that funding.

“The answer is, we need a gas tax. It’s that plain and simple,” said Cangelosi, adding that an increase of between 17 to 20 cents would likely be adequate.

State Rep. Steve Carter, a Baton Rouge Republican, sponsored legislation this year that would have gradually raised the gas tax by 18 cents per gallon, though the proposal was shelved.

Planes, trains and automobiles: Louisiana No. 2 for roads, other transportation investments, governor says