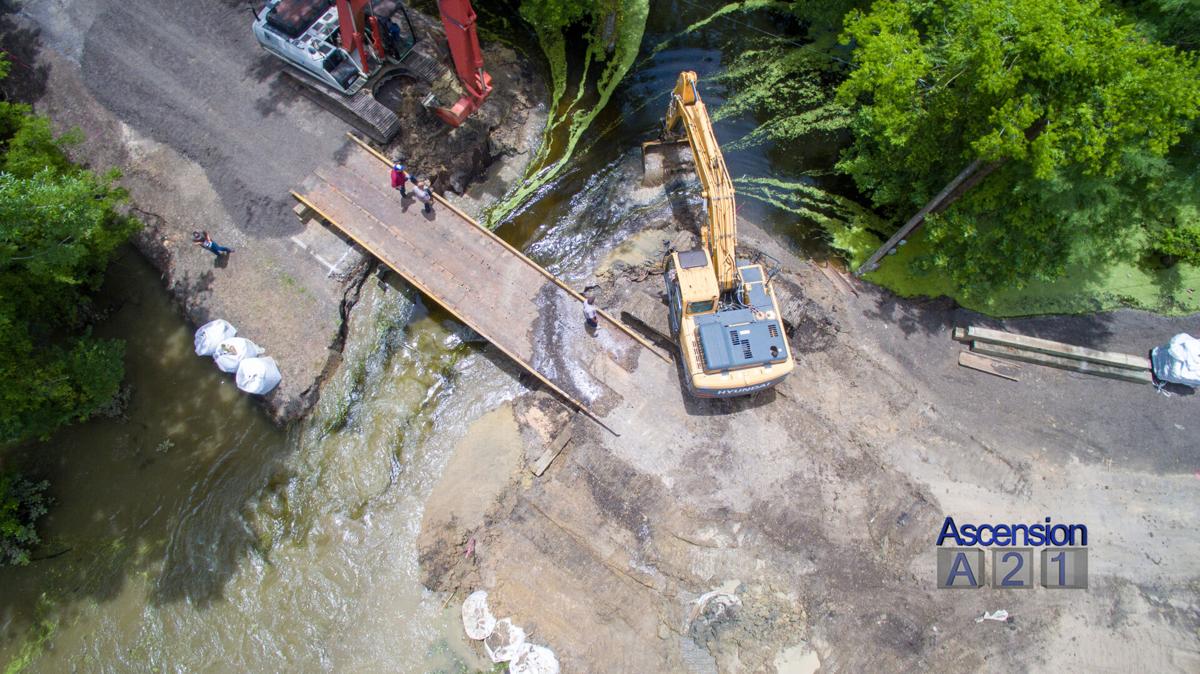 As workers stand on a temporary bridge, high water from the Bluff Swamp flows Friday, May 28, 2021, into Bayou Manchac, bottom, through a new, temporary drainage channel, center, left, cut across Alligator Bayou Road. Ascension Parish officials made the cut to alleviate flooding in the region. A similar effort happened after even more severe flooding in the August 2016 flood. 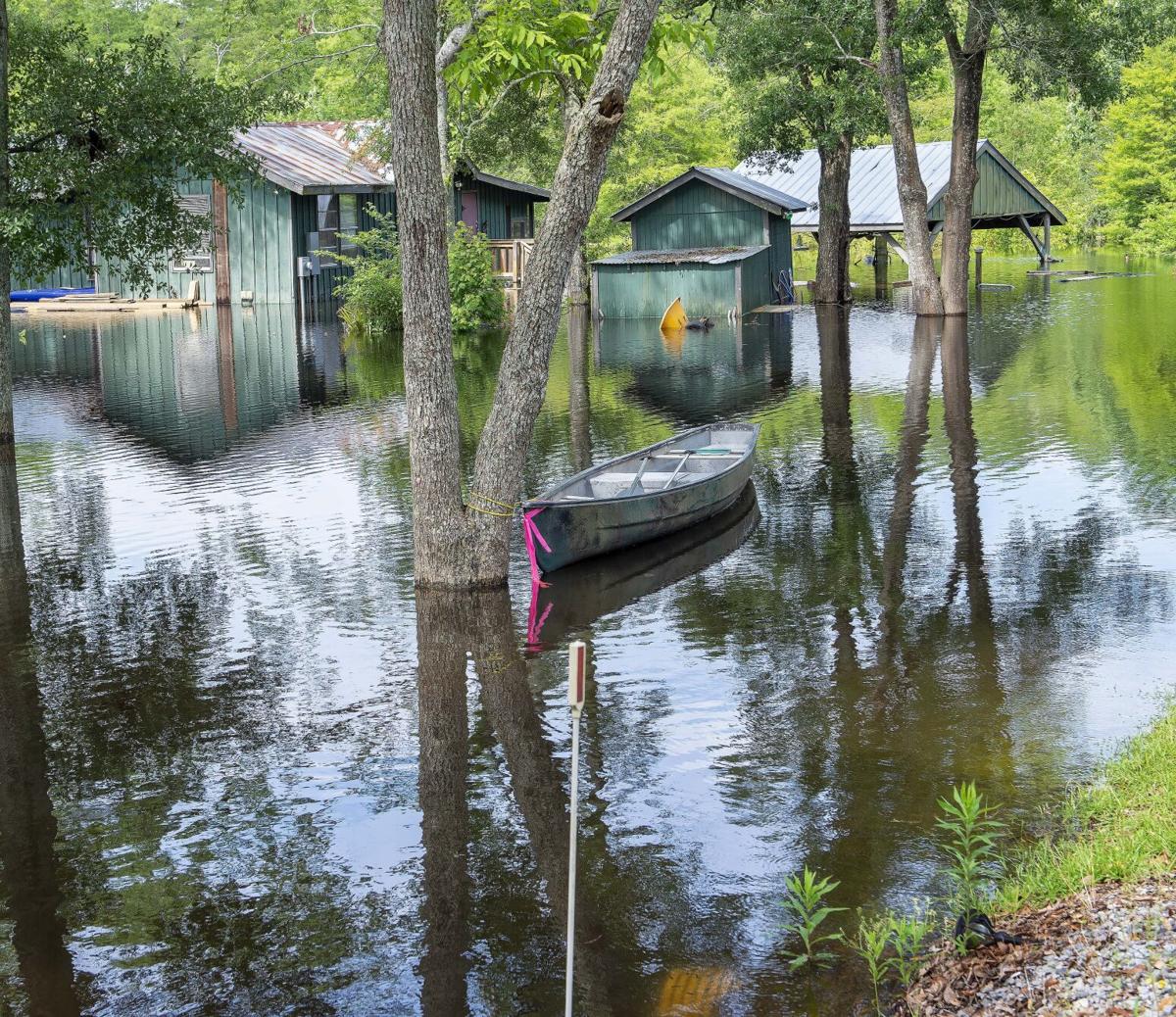 With the boat tied to a tree, a houses reflects in the surrounding flood waters on Bluff Road as Ascension and Iberville Parishes continue to deal with flooding problems Monday May 24, 2021, in Ascension Parish, La. The people who live in Bluff Swamp began flooding late last week from rain and drainage in the swamp region west of Bluff Road. Iberville has been putting up Aquadams to protect those people from more water from Bayou Manchac. But EBR says the dams could worsen flooding there.

As workers stand on a temporary bridge, high water from the Bluff Swamp flows Friday, May 28, 2021, into Bayou Manchac, bottom, through a new, temporary drainage channel, center, left, cut across Alligator Bayou Road. Ascension Parish officials made the cut to alleviate flooding in the region. A similar effort happened after even more severe flooding in the August 2016 flood.

With the boat tied to a tree, a houses reflects in the surrounding flood waters on Bluff Road as Ascension and Iberville Parishes continue to deal with flooding problems Monday May 24, 2021, in Ascension Parish, La. The people who live in Bluff Swamp began flooding late last week from rain and drainage in the swamp region west of Bluff Road. Iberville has been putting up Aquadams to protect those people from more water from Bayou Manchac. But EBR says the dams could worsen flooding there.

GONZALES — With a potent tropical disturbance gathering force in the Gulf of Mexico, Ascension became the second Baton Rouge-area parish in two days to adopt some kind of halt on new development as the aftermath of the May flash floods has prompted leaders to take a closer look at growth.

But the nine-month halt on new land divisions in Ascension, which a majority of the Parish Council adopted late Thursday, left few parties happy. Parish President Clint Cointment even said he needed a different council to change Ascension for the better.

The compromise measure gave Cointment and his administration less than the one year he wanted but more than what homebuilders were willing to accept. They argued development rules and drainage could be improved without halting the supply of new lot approvals.

Flood concerns cause Iberville to halt construction in some places; Ascension could follow

The Iberville Parish Council approved a one-year halt on new construction on the east side of the Mississippi River, a move that mirrors simil…

Cointment told reporters later that the shortened timeframe for the moratorium won't be enough, saying the parish was already facing a tight timeframe under the 12 months he had been seeking to accomplish its goals, and suggested it would be up the council now to spearhead any development changes.

"The nine months was just so they could try to save face," Cointment said. "This will be a failure. I'm telling you. This is the council's plan, and now it's up to the council to make it happen. The administration will not be a part of failure."

He charged the council was "pro-development" and intentionally setting up the potential development changes for failure by adopting the nine-month limit.

"And until you change these people out, you will not have change in Ascension Parish," he said.

The council had originally proposed a six-month moratorium, but a majority on Thursday adopted an amendment from Councilman Dal Waguespack to make its proposal nine months.

The council then had its nine-month and Cointment's 12-month moratoria before it. After a series of parliamentary maneuvers that forced a final vote on the compromise council proposal first and left little opportunity for debate, the council adopted it 9-2, with only Councilmen Joel Robert and Michael Mason opposed.

Frustrations with the outcome flared after a marathon meeting that had ended close to 11 p.m. Thursday. Cointment verbally clashed with Councilmen Corey Orgeron and Aaron Lawler before a bank of reporters' video cameras.

Should neighborhoods be able to limit development before city-parish upgrades drainage?

At one point, Cointment told Orgeron to "just go away" amid complaints from the councilman that the administration needed to start dredging canals that he had been begging officials to address since February 2020.

"You've been begging me to do nothing," Cointment fired back. "Just go away."

"This is the challenges I have every day. This is what I fight against," Cointment said moments after Orgeron walked off.

On Tuesday, the Iberville Parish Council agreed to a one-year halt on new subdivision plats and site development plans for land within the unincorporated east bank and outside St. Gabriel.

The Ascension halt would affect all land divisions across the parish but outside the municipalities, except those in industrial zoning categories.

Both measures would not stop new construction in neighborhoods already through at least the initial phase of development approval and on other kinds of existing lots. But they come as both parishes have grappled with slow-draining high water in the 17,000-acre Spanish Lake and Bluff Swamp region that had surrounded homes for days after the May floods.

Ascension, Iberville and the rest of southeast Louisiana were put under a tropical storm warning earlier on Thursday as forecasters predicted the disturbance in the Bay of Campeche could become a tropical depression by late Thursday or early Friday and drop four to six inches of rain on the Baton Rouge through early Tuesday.

Before the vote in Ascension, the Parish Council listened nearly two and a half hours from passionate residents and worried home builders about the proposed halt as either a long-overdue response to years of calls for action or a wrong-headed attempt that would cost people jobs and the parish economic vitality and tax revenue.

At least 42 people signed up to speak; the majority called for a one-year halt supported by the parish president.

Some made baseless accusations of corruption that riled some on the council. Others offered a more measured plea.

GONZALES — On streets that flooded nearly hip deep, the neighbors of Eric Gulotta helped ferry people from the inundated entrance of their new…

"I don’t know the right answer, but I do think we need to take a step back and take some time and understand the consequences of what we're doing right now," said Dr. Terry Rehn, 75, cardiologist who has lived off Bluff Road since 1993 and still has water blocking his driveway weeks after the May floods.

Sam Baker, a longtime community activist and Geismar resident, told the council the development question is a a football that has been kicked around for 30 years. Had the problem been faced then, he said, Ascension would be a different parish today, but it was up to this council to deal with the issue for the future.

"If we don’t do nothing, then what's going to happen in the future is it's going to be worse than what we have now," Baker said.

Builders, several of whom wore red shirts in solidarity, argued a moratorium would affect local workers who live in Ascension.

Some charged also that it is the parish, with tens of millions dollars in the bank, which has failed to spend the money it has to improve drainage, as well as enforce its own strict rules.

"It is apparent, to me, in the 25 years I have been in business, there are tools now in the parish that they have at their disposal that they don't implement: no implementation, not enough staff to do it and no enforcement of the current strict rules," Diane Baum, a Home Builders Association of Greater Baton Rouge representative and head of a local storm water consulting company.

Baum said later she was disappointed to hear Cointment announce after the vote that he would leave the development changes up to the council without the administration's help.

"It's unfortunate he can't work with the council on this nine months," she said.

Cointment later clarified that he would do planned listening tours and gather information to serve as a voice for the people before the council.

After the May storm dropped as much as 14 inches of rain in six to eight hours on parts of south Baton Rouge and northeastern Ascension, Cointment had called for the sweeping, one-year moratorium.

He suggested that existing development rules aren't strong enough as the intensity of rainfall and the propensity for tropical storms and hurricanes has seemed to increase and it was time for adjustments.

"It is simple. If you dig a whole and it's in the wrong place, digging it deeper is not going to help," Cointment said.

Home builders opposed any halt on new neighborhood approvals as a misguided attempt that would only hurt jobs and cut into the supply of housing that could force some homebuyers out of the market in Ascension.

Cointment has countered that parish staff calculated that builders have a three-year supply of about 2,000 neighborhood lots, not including individual acreage sites and those in Ascension's municipalities, where the moratorium won't take effect.

Builder groups have called that number into question and suggested it glossed over market realities.

Bart Waguespack, a local builder in Ascension, said those numbers were still misleading because large-scale developers have spoken for many of those lots.

"Guys like us don't have any lots to choose from," Waguespack added.

Even before the moratorium, the pace of new neighborhood approvals has slowed considerably since the mid-2010s, when 1,764 and 1,391 lots were approved in 2015 and 2016, parish data show.

After changes to traffic impact study rules and other review processes, new approvals dropped off to fewer than 50 in 2019 and hit 180 in 2020, parish data and planning minutes show.

New residential building permits since 2017 have remained at their strongest pace since the go-go years between 2003 and 2006, when annual totals ranged between 1,123 and 1,706 four years straight, parish audits say.