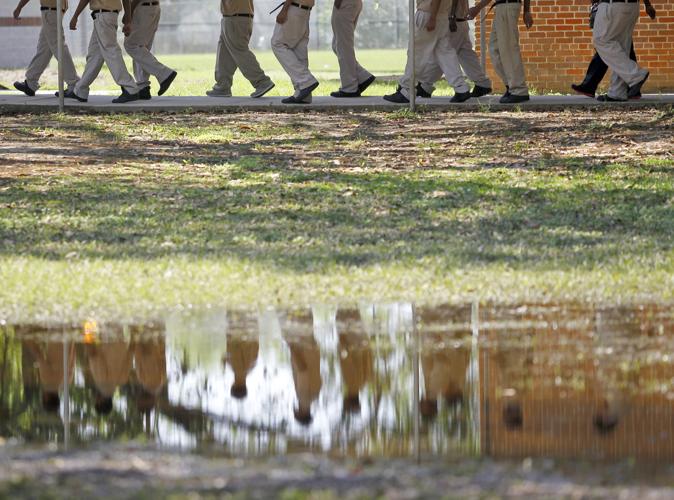 BRETT DUKE / THE TIMES-PICAYUNE Inmates walk between buildings at the Bridge City Center for Youth in Bridge City Tuesday, March 27, 2012. 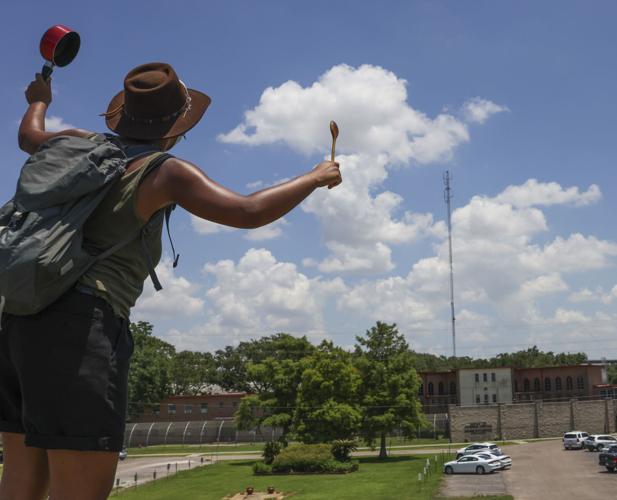 People stand on the levee and make noise to let the youth inside the Bridge City Center for Youth know they are outside and stand in solidarity with them in Bridge City, La., Saturday, June 18, 2022. Jefferson Parish Sheriff's deputies and SWAT responded on Thursday night after about 20 youths detained at the center took over part of the facility. Some elected Jefferson Parish officials want to close down the center. The group on the levee chanted, "ÒBridge City Youth have has right to rebel. State troopers go to hell.Ó (Photo by Sophia Germer, NOLA.com, The Times-Picayune | The New Orleans Advocate) 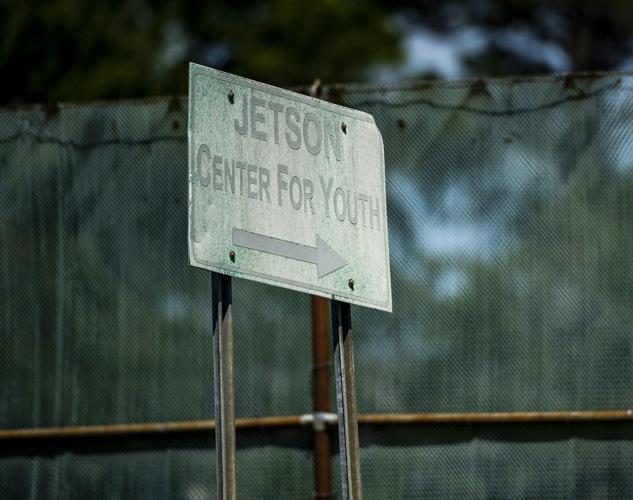 An old sign points to the Jetson Center for Youth on Monday, June 20, 2022 in Baker, Louisiana.

Guards from Louisiana's adult prisons have been called in to quell chaos inside two state-run youth jails — and they have been allowed to carry tasers and pepper spray and employ use-of-force techniques often reserved for adults, internal documents show.

The temporary approval of such tactics, which are generally off-limits in youth facilities, is a sign of increasingly desperate conditions inside Louisiana’s aging and understaffed juvenile jails, like the Bridge City Center for Youth just west of New Orleans and the Swanson Center for Youth in Monroe.

Internal memos outlining the order simply authorized the tactics, and officials and advocates have not reported any uses of force on incarcerated teens since the extra staff entered the facilities on Friday.

Still, the decision to allow use-of-force techniques from adult facilities inside the youth lockups alarmed some attorneys, advocates and experts, who said it was highly unusual.

“The way to understand these policies is that they’re a threat of increased use-of-force on children in facilities that are supposed to be helping children and rehabilitating children,” said Aaron Clark-Rizzio, executive director of the Louisiana Center for Children’s Rights. “If there is too much fear and violence within these facilities, they’re not going to help that by introducing more fear and more violence.”

The Department of Correction and Office of Juvenile Justice did not return requests for comment by press time.

OJJ officials have struggled for months to remedy issues at the Bridge City facility, dealing with multiple escapes. Those problems escalated last week when 20 juveniles took over parts of the building, leading Jefferson Parish Sheriff's deputies and SWAT members to enter to restore order.

That same day, five youths escaped through a hole cut in a bathroom ceiling.

Edwards described it as a last-ditch response to “an urgent situation.”

“This immediate solution will be in place for as long as necessary as we work to put a long term staffing plan in place to ensure the safety of the youth who have been entrusted to our care as well as the staff,” he said in a statement. “We are in conversations about the longer term solution and nothing is off the table.”

As part of the response, leaders of OJJ — which operate juvenile facilities separately from the Department of Correction's adult prisons — sent a memo, which The Advocate reviewed, detailing use-of-force policies for DOC guards who had been temporarily posted in the two youth facilities. DOC staff are authorized in the temporary period to carry pepper spray and tasers and to “utilize the use-of-force continuum for which they are trained,” the memo said.

It wasn’t clear Tuesday how many DOC employees were dispatched to the two facilities.

In law enforcement, a "use-of-force continuum" describes what kinds of physical force guards, police officers and other agents of the law can use to gain control of a situation, and when. Guards in Louisiana youth lockups operate under stricter use-of-force standards than those in adult prisons, according to Clark-Rizzio.

OJJ’s use-of-force standards only allow pepper spray in rare situations and do not mention tasers, according to documents reviewed by The Advocate. That’s the case in most youth justice systems, according to Vincent Schiraldi, a former director for youth and adult corrections agencies in New York City and Washington, D.C. He now teaches at Columbia University and sits on the board of Youth Correctional Leaders for Justice, a reform-focused advocacy group.

Schiraldi described the OJJ’s altered policy as a major break from standard practice in juvenile jails.

While the youth justice system is generally charged with rehabilitation, adult prisons focus less on measures like programming and counseling, and guards are quicker to use force, Schiraldi said. Bringing DOC guards into OJJ facilities under directives drawn from adult lockups, he said, risks conflating those systems.

"Just by virtue of (the guards) being from adult facilities where things are much harsher makes them much less likely to recoil from harsh practices around juveniles,” Schiraldi said. “They’re basically saying ‘it’s the adult way now.’ It’s not just that they’ve put adults in there and said they’re going to use the juvenile way — they’ve said, ‘use the adult approach.’”

“That’s extremely worrisome,” he added. “If my kid was in there, I’d be worried.”

Clark-Rizzio, whose organization advocates for children who end up in the criminal justice system, said he has never heard of tasers or pepper spray being used in a juvenile facility in Louisiana. Pepper spray is used rarely in youth jails and tasers are “unheard of” in those settings, Schiraldi said.

“There’s nothing in the OJJ policies about secure facilities that even acknowledges that tasers are an option,” he said.

Problems inside Louisiana’s youth lockups aren’t new. Facing reports of violence inside the Jetson Center for Youth near Baton Rouge, the state promised in 2008 to close the troubled facility and proceed with reforms it had promised years earlier. When the prison's doors finally closed in 2014, it was because officials deemed it an “obsolete, unsafe, and costly physical plant” that “does not fit into our reform efforts.”

In the wake of the Bridge City incidents, some officials have said that facility should close, too. Others are weighing reopening the Jetson facility as a remedy for OJJ's staffing woes.

The violence persisted amid efforts to bring those reforms up to speed in recent years. Violence rose inside Louisiana's juvenile prisons in the three years leading up to 2017, a state audit that year found, even as the number of teens behind bars fell.

The audit also found that staffing shortages had become so chronic that the state had run afoul of federal laws intended to protect youths serving time in secure care facilities.