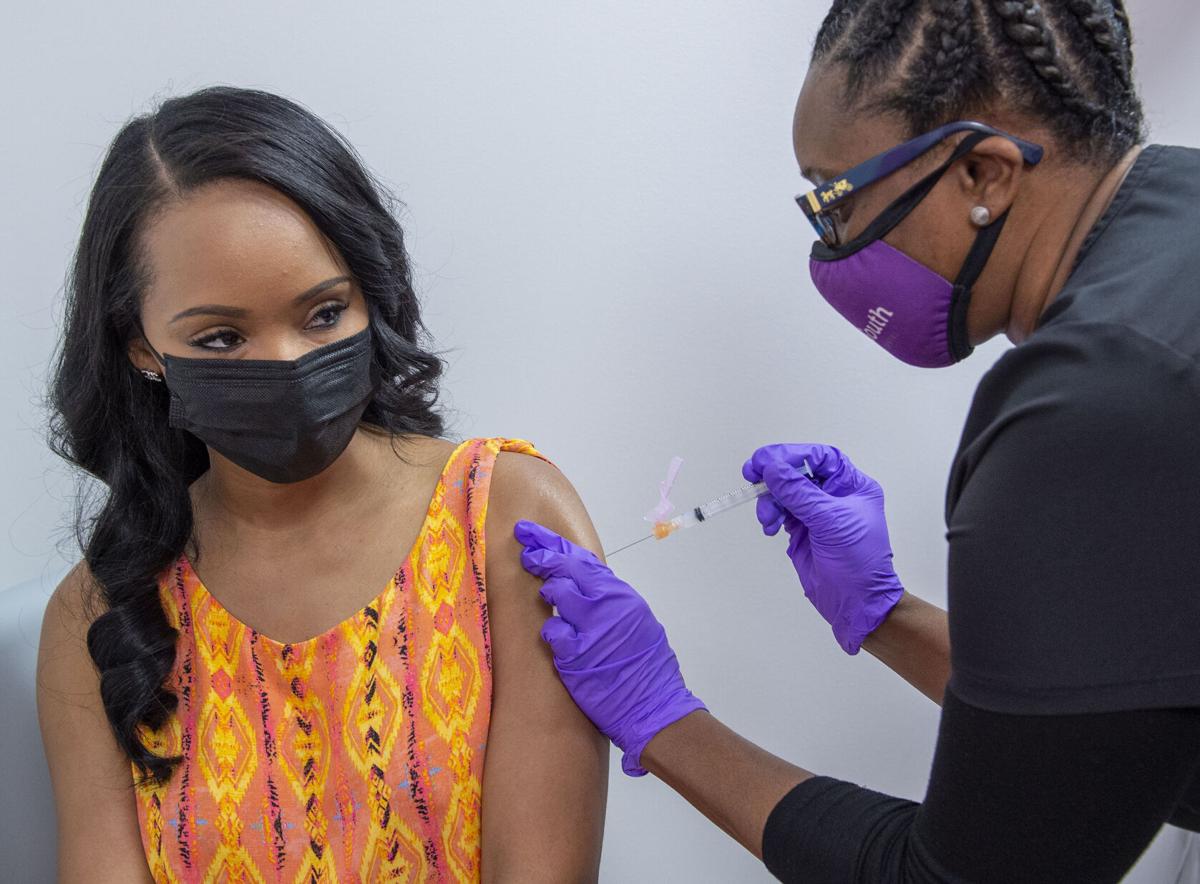 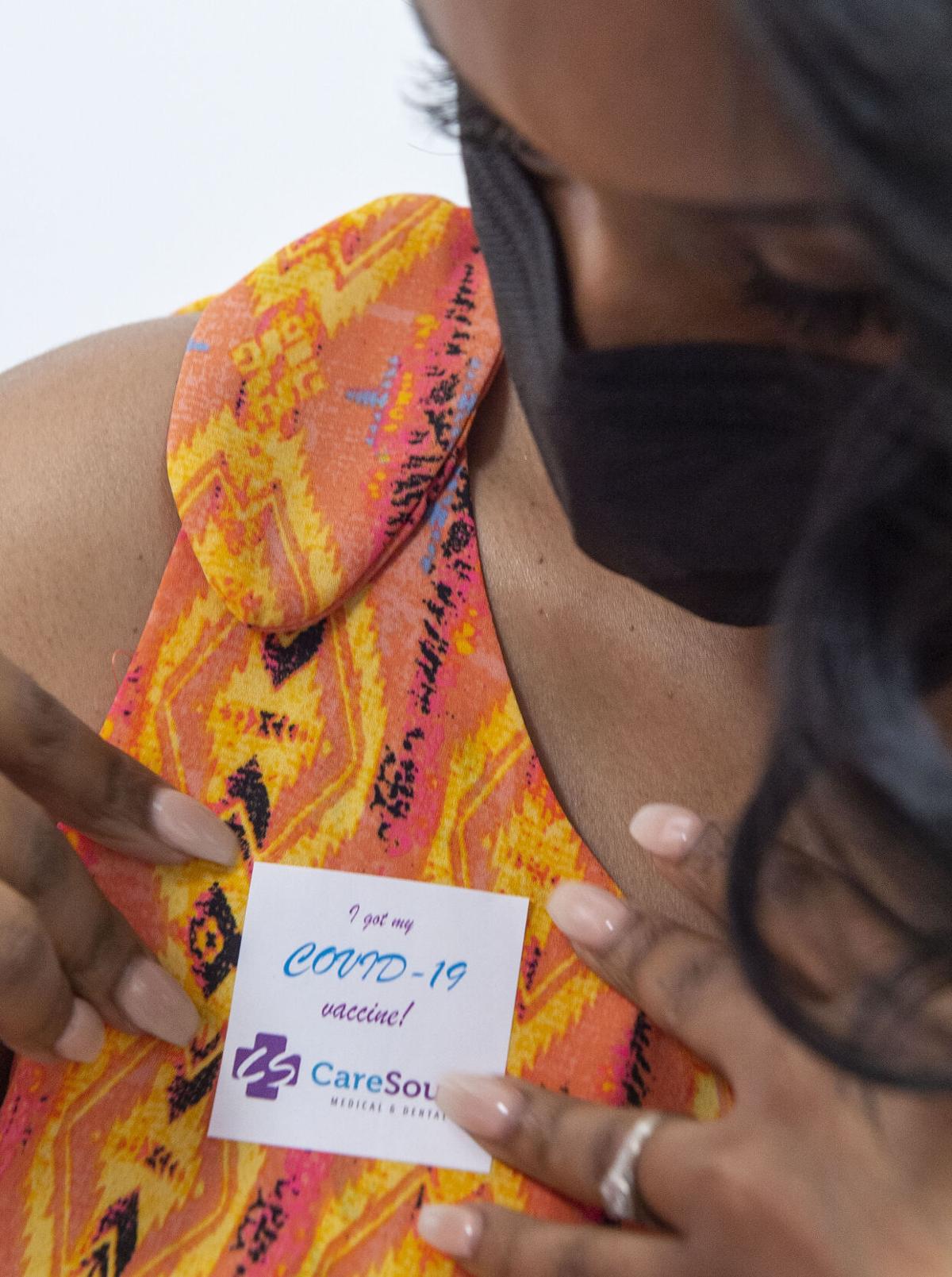 Jacqueline Richardson puts her sticker on after receiving her first dose of the Moderna COVID-19 vaccine from Kimberly Levy, LPN, as people get their vaccination shots under the state's expanded eligibility at CareSouth Capitol City Family Health located at 3140 Florida Street Monday March 29, 2021, in Baton Rouge, La. 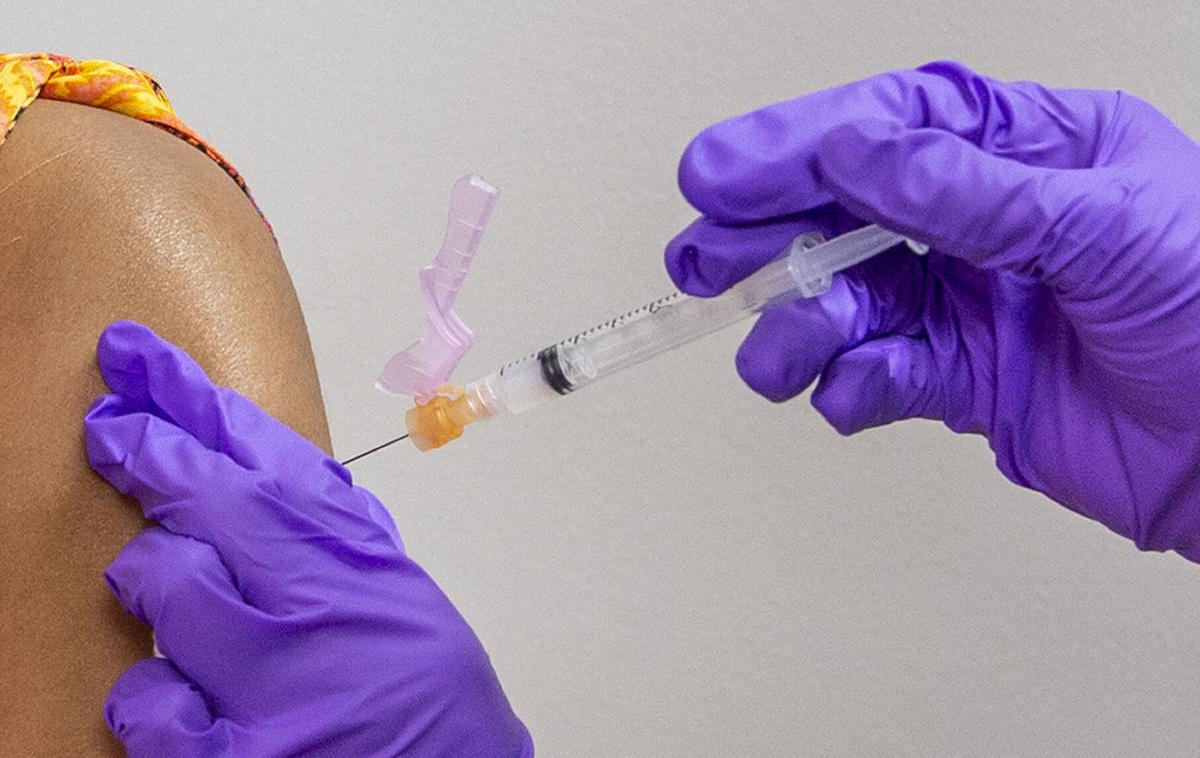 Jacqueline Richardson puts her sticker on after receiving her first dose of the Moderna COVID-19 vaccine from Kimberly Levy, LPN, as people get their vaccination shots under the state's expanded eligibility at CareSouth Capitol City Family Health located at 3140 Florida Street Monday March 29, 2021, in Baton Rouge, La.

Early in the rollout of the novel coronavirus vaccine, hair salon co-owner Jacqueline Richardson was hesitant to receive the shot.

At age 35, Richardson wasn't going to be first in line anyway, but, as time passed and she said she watched her parents and even her husband receive the vaccine without problems, Richardson found herself more comfortable with the idea and began checking regularly for an opportunity to get a left-over shot.

On Monday, the first day that vaccinations in Louisiana were open to anyone 16 and older, Richardson was able to get in line for the first of two Moderna shots at the CareSouth health clinic on Florida Street in Baton Rouge.

"Being part owner of a hair salon and coming into contact with so many people daily, you know, at this point, it's just the right thing to do," Richardson said shortly after receiving her shot early Monday afternoon. "And I feel really good about doing it."

Everyone 16 and older is eligible for the COVID vaccine in Louisiana. Here's where to get it

All adults are now eligible for the COVID vaccine in Louisiana as the state expects a record-high shipment of doses.

CareSouth's clinic is one of 608 pharmacies, Walmarts, health clinics and other locations across Louisiana receiving doses of the COVID-19 vaccine this week. Completed vaccinations statewide passed 720,000 people on Monday and a new phase of vaccinations with widespread eligibility has begun.

Under the latest state figures Monday, which tallied statistics just before the new eligibility phase started, 15.5% of the state's population was fully vaccinated, up more than a percentage point from Thursday.

East Baton Rouge Parish, which had been tracking with the statewide figure, pulled ahead slightly on Monday to nearly 16% of the parish's more than 440,000 people.

West Feliciana and St. Helena parishes continued to have the greatest and smallest shares of their respective residents fully vaccinated in the Baton Rouge area, though both parishes saw increases, as did the rest of the region.

New cases statewide remain near all-time lows since the pandemic began in Louisiana a year ago in March.

But, in Louisiana and in several of the larger parishes in the Baton Rouge area, including East Baton Rouge, new cases remain in an essentially flat or slowly declining trajectory as have hospitalizations and deaths, the latest data show.

All Louisianans older than 16 will be eligible for a COVID-19 vaccine starting next week, Gov. John Bel Edwards announced Wednesday, making th…

Dr. Anthony Fauci, President Joe Biden's chief medical advisor and director of the U.S. National Institute of Allergy and Infectious Diseases, has warned the mix of rising vaccinations with flat case levels and the spread of new variants hold the risk for another wave of cases.

He and President Biden have warned against easing up on mask and other restrictions too quickly.

CareSouth's Florida Street clinic is located amid a collection of additional CareSouth and other medical facilities, including Baton Rouge General's Mid-City campus, but even there, the percentage of the local population that has been vaccinated lags the parish-wide figure by more than 4 percentage points.

The area is largely African-American, census data show, and other areas nearby in Mid-City or near downtown Baton Rouge show an even lower share of the population is vaccinated, at half or less than half the parishwide percentage of nearly 16%, state data show.

Dr. Gregory Garner, chief medical officer of CareSouth, a federally qualified health center with a handful of locations in the Baton Rouge area, said he has seen a shift in the willingness among older residents to receive the vaccine, but that shift in attitude largely hasn't penetrated younger demographic groups.

"If you're with the 50-and-older age group, the hesitancy has gone down after seeing more people get the shot and not having any adverse reactions. That 40-and-under group? It's the same," Garner said.

He said about 75% of the 2,000 people who have been vaccinated at the clinic so far — which generally handles about 40 people per day — are Black. With the increased supply in vaccines, waiting lists have also eased considerably, he said.

Garner said convincing younger adults to receive the shot will need to involve changing the narrative so that they understand their getting vaccinations protects them and their aunts, uncles, parents and grandparents from getting sick or even dying.

"So just taking care of each other is probably the biggest message you can get to the younger population," Garner said.

Richardson said her and her business partner's Happy Hair Salon and Boutique has nearly 10 stylists and see 8 to 15 people per day.

Though she and her employees have been wearing masks and taking other measures, Richardson said, she and her partner have gotten their first shots, in part, to encourage their employees to do so also.

She said seeing her own friends and family take the vaccine and not have problems helped give her the confidence to do so herself and hopes her own example can do the same for her employees.

"In my mind, after people have gotten it and people have been OK, I think that makes it easier, you know? It's nothing like seeing it for yourself or knowing someone personal that's connected to you that makes you feel like, 'OK, you know, this is OK,'" she said.

Replay: What's next for Louisiana's COVID restrictions? Some businesses won't have capacity limits

One day after COVID vaccine eligibility opened to all Louisiana adults, Gov. John Bel Edwards is expected to address the future of coronavirus…