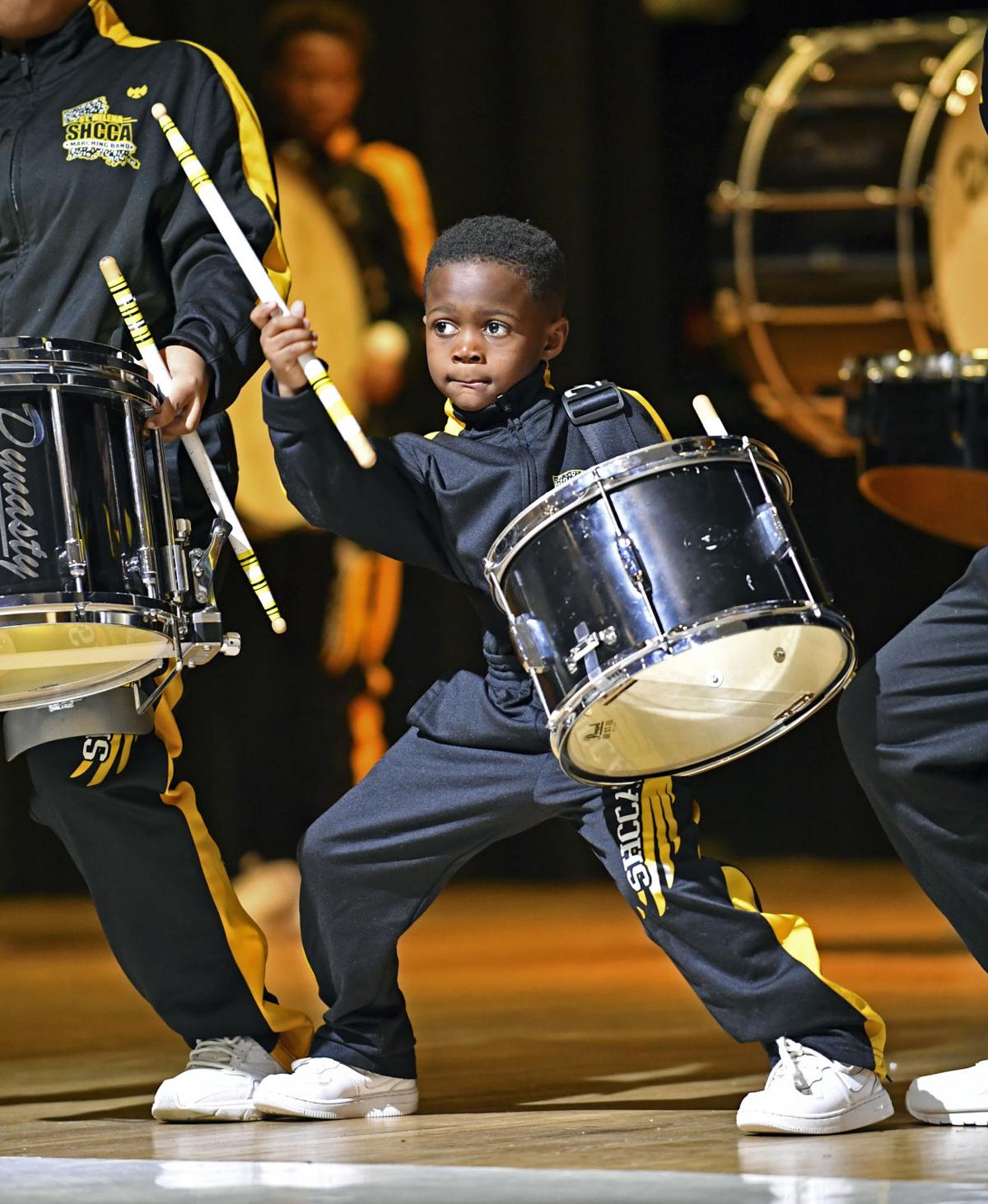 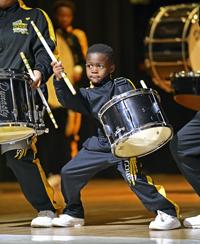 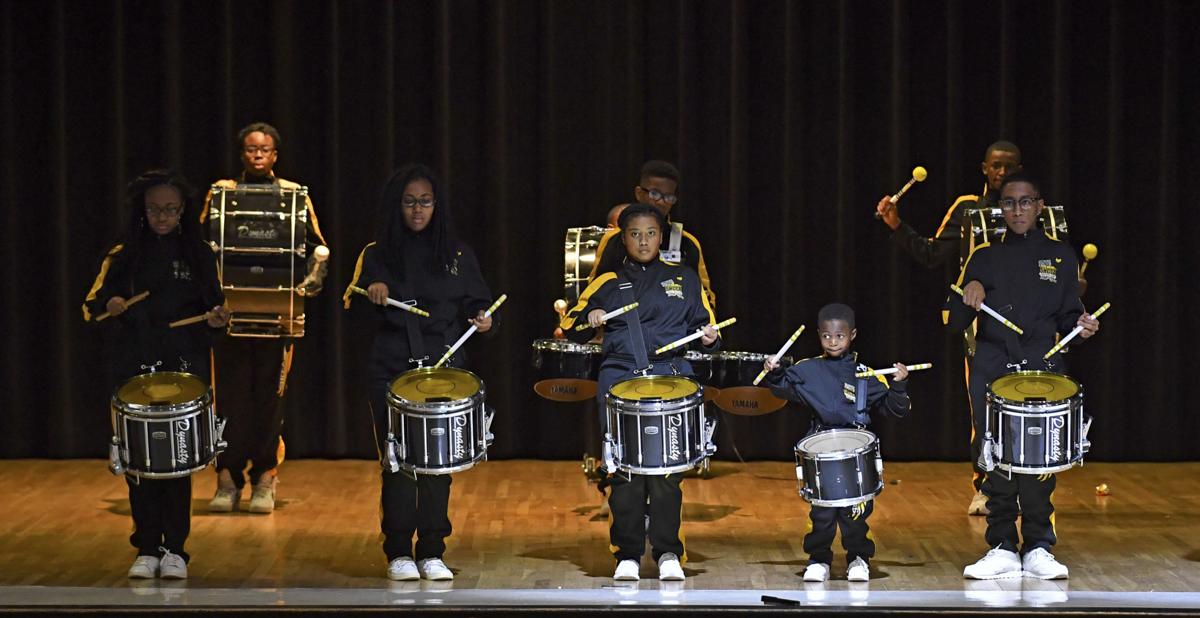 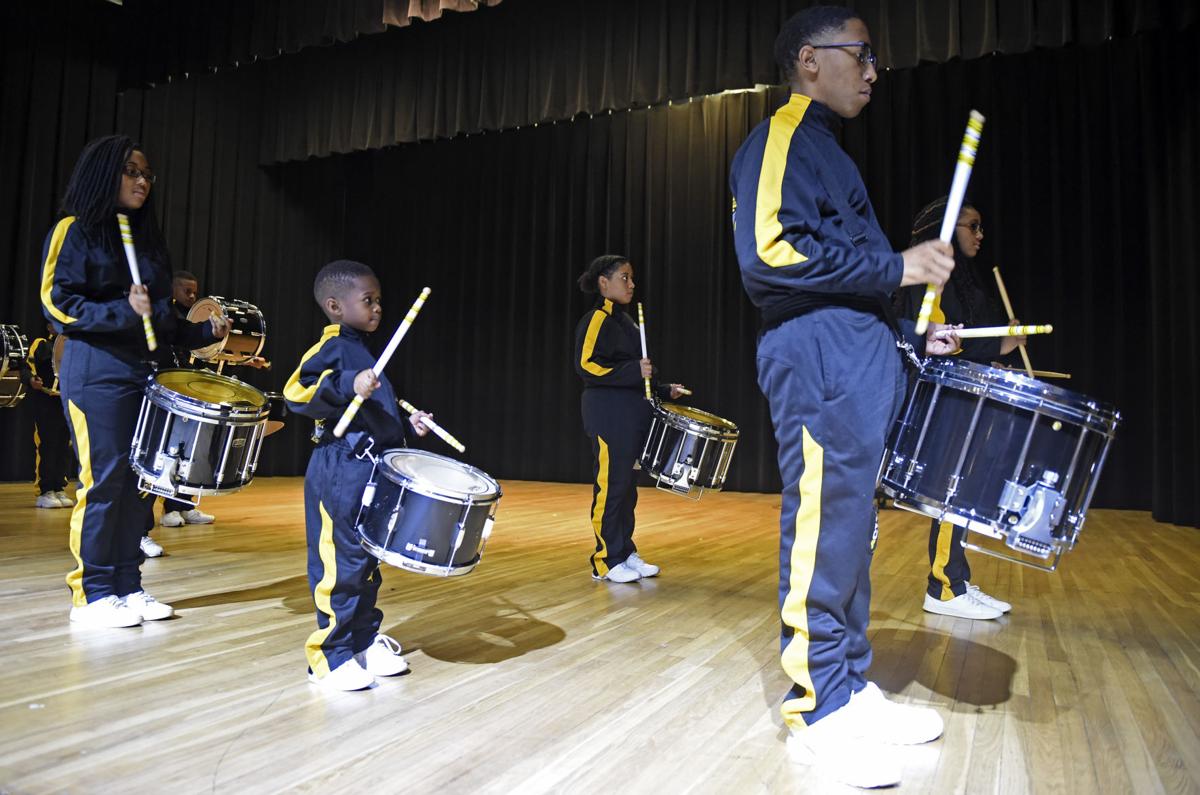 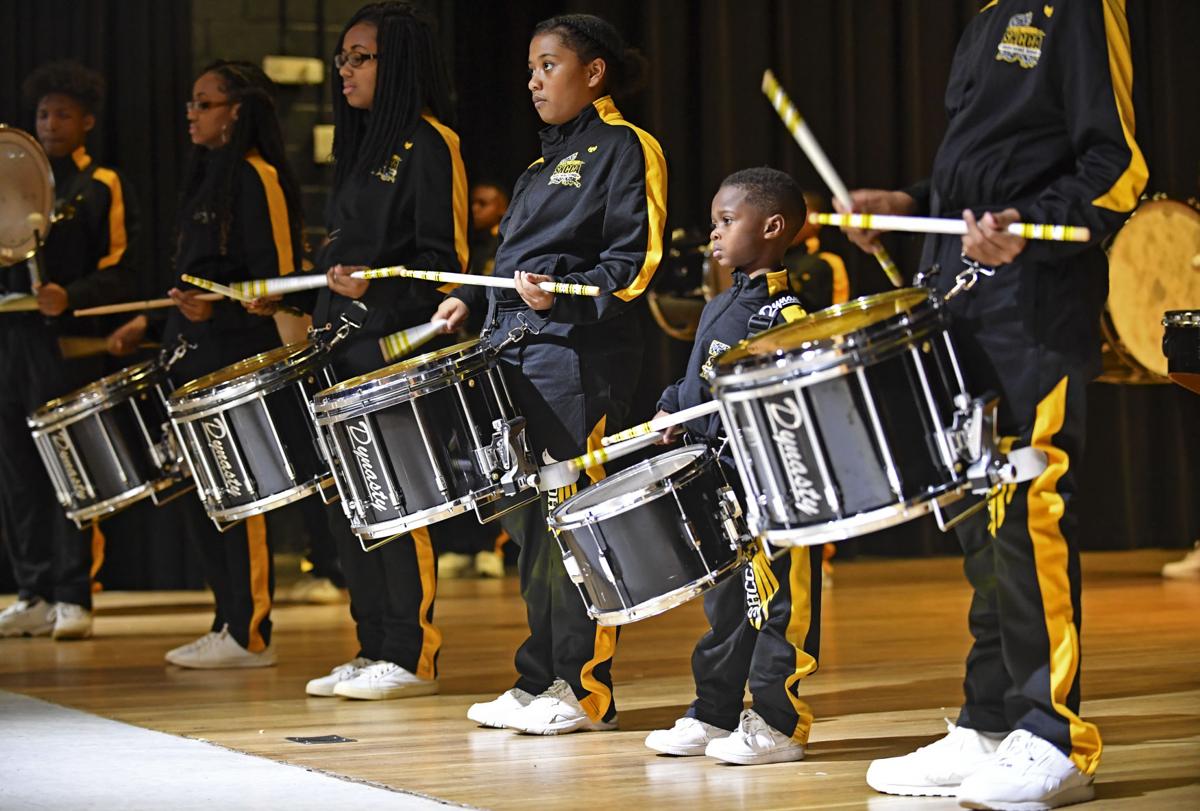 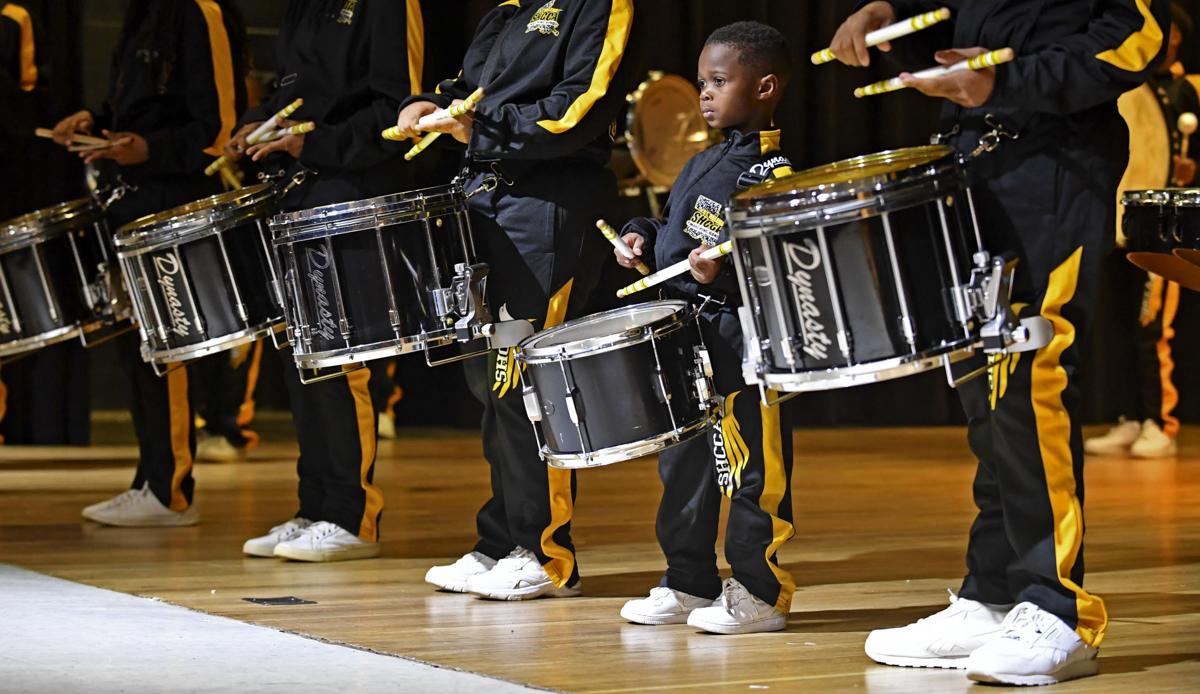 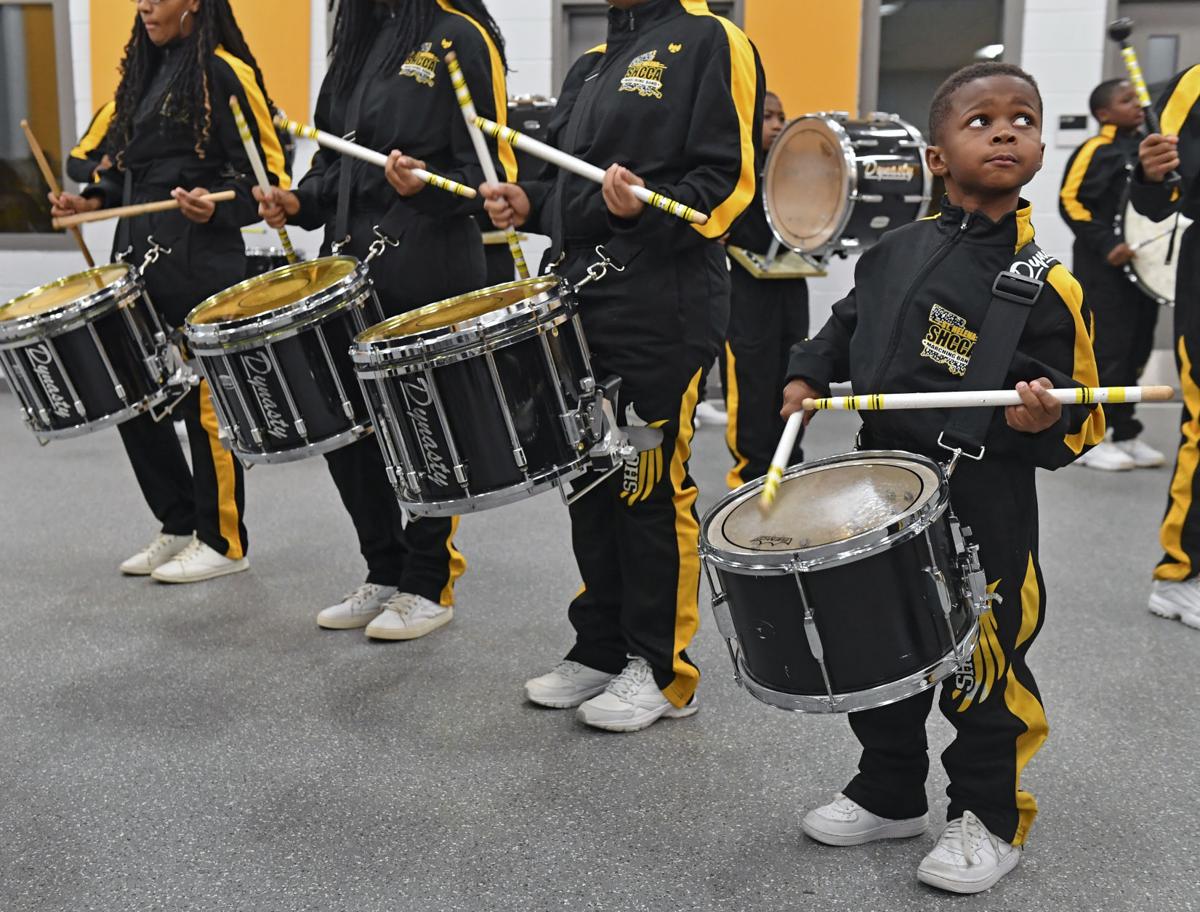 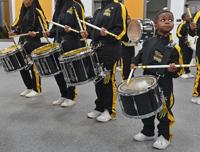 As 5-year-old Jeremiah Travis looks up to Ken Jackson to his left as he practices with the St. Helena College and Career Academy high school band, Thursday, January 23, 2020, in Greensburg, La.

As 5-year-old Jeremiah Travis looks up to Ken Jackson to his left as he practices with the St. Helena College and Career Academy high school band, Thursday, January 23, 2020, in Greensburg, La.

When Alcorn State University’s band director called Nicole Jackson in the fall hoping to meet and offer her son a college band scholarship, she was in disbelief.

It wasn’t because he’s not good enough, doesn’t practice hard enough or she doesn’t think he can make it to the college level. It was because he’s 5 years old.

“I shook my head; then I thought, 'Oh, I need to get him a haircut before they come meet him.' It all happened so fast,” she said.

Jeremiah Travis has become a sight to see at St. Helena Parish sporting events. Standing only as tall as the drums on the hips of the high school band members he performs with, he manages to keep up with the others using his pint-sized drum and his full-size dance moves.

Videos of his and the band’s performances have gone viral online and have turned heads of students and staff much to his senior — including the Alcorn State University team where he now has a scholarship offer for more than a decade away.

Watch the video below as Travis performed for popular TV host Steve Harvey:

But for the Greensburg community that’s been watching Jeremiah beat sticks on his desk, the school bus and toys for years, it’s not all that surprising.

St. Helena College and Career Academy band director Chesteron Frye scouted Jeremiah from the stands of a football game back in 2017. Frye, then new to the high school’s program, heard someone in the audience beating along to the band’s songs and picking up the rhythms in record time.

When he looked out to the crowd, he didn’t expect to see a 2-year-old behind all that noise.

“I was like 'who is this baby beating these drumsticks?' I said he’s got to come to band practice, he’s got to join in,” Frye said.

In Jeremiah’s first year, the drums the other kids used were too big, so he’d use a red and yellow Fisher Price drum set. He didn’t fit any of the uniforms, so Jackson bought him some plain black pants and tailored the rest of the uniform to fit a toddler.

Now in the 2019-20 school year, when Jeremiah has been in the band almost as long as a high school student would be, he’s big enough to carry the same drum — albeit a smaller version — as his peers, and he just about fits the smallest youth size uniform.

Four days a week, he finishes his school day at the Early Learning Center, then takes the bus to St. Helena College and Career Academy where he spends three hours in practice with the 75-student band.

The percussion director, Brandon Dorsey, describes Jeremiah as everyone’s little brother. He gets off the bus to high-fives and hugs before he eats a snack to refuel and gets to work.

“It’s like a standing ovation when he gets off the bus with kids yelling 'Jeremiah, Jeremiah,'” Dorsey said. “He makes all of us proud: the principal, the students, the superintendent, the community. He makes us proud and he’s just working on his future.”

Despite the fame and attention, Jeremiah himself is soft-spoken at band practice on a recent weekday. He repeats the drills without a break the same as the older kids do and copies their feigned disdain and sighs when Dorsey mandates the fourth repeat of the same song.

When asked what he likes about being in the band with the older kids, he’s shy in the way kindergarteners sometimes are, and then pipes in, "It’s fun and I like the games.”

Jeremiah’s mom says he’s always thought he’s bigger than he is. He’s got two older sisters — one is 12 and the other 21 — so that may play into it, Jackson said, but he could spell a few words by the time he got to prekindergarten and needs to be reminded of his age.

She remembers when Jeremiah went to day care as a toddler and was caught trying to go into the nursery room to help the staff take care of the babies as if he himself weren’t little.

For Dorsey, it’s been a challenge to balance teaching teenagers and a kindergartner in the same group but one he thinks can grow the small town band immeasurably.

“He takes it really seriously, and we treat him like we treat everybody else, but sometimes you’ve got to remember he’s just 5 and make sure you’re kind of light on him,” Dorsey said. “Sometimes I forget and I’ll get on him about something, but then I think about it and just go buy him a toy.”

Jeremiah has a learning ability “through the roof,” Dorsey said, and any time he’s got free, he’ll be banging on something with his drumsticks.

“You would never think he would learn this type of stuff at the age of 5,” Dorsey said. “It might take him more days than the high school kids, but he does it and he does it in time for all our games and events.”

At the age he is now, Jeremiah could feasibly have another decade with the band before going off to college. He’ll continue to grow into his uniform, get stronger in carrying his drum while marching and, Frye and Dorsey hope, continue to flourish in his natural talent.

“He knows that ‘hey, I have a band scholarship’; he knows this will pay for my college, and he has an understanding of what that is,” Frye said. “He knows he’s getting an education for free and if he plays long enough he’ll have more and more opportunities, and we’re excited to be there for it.”