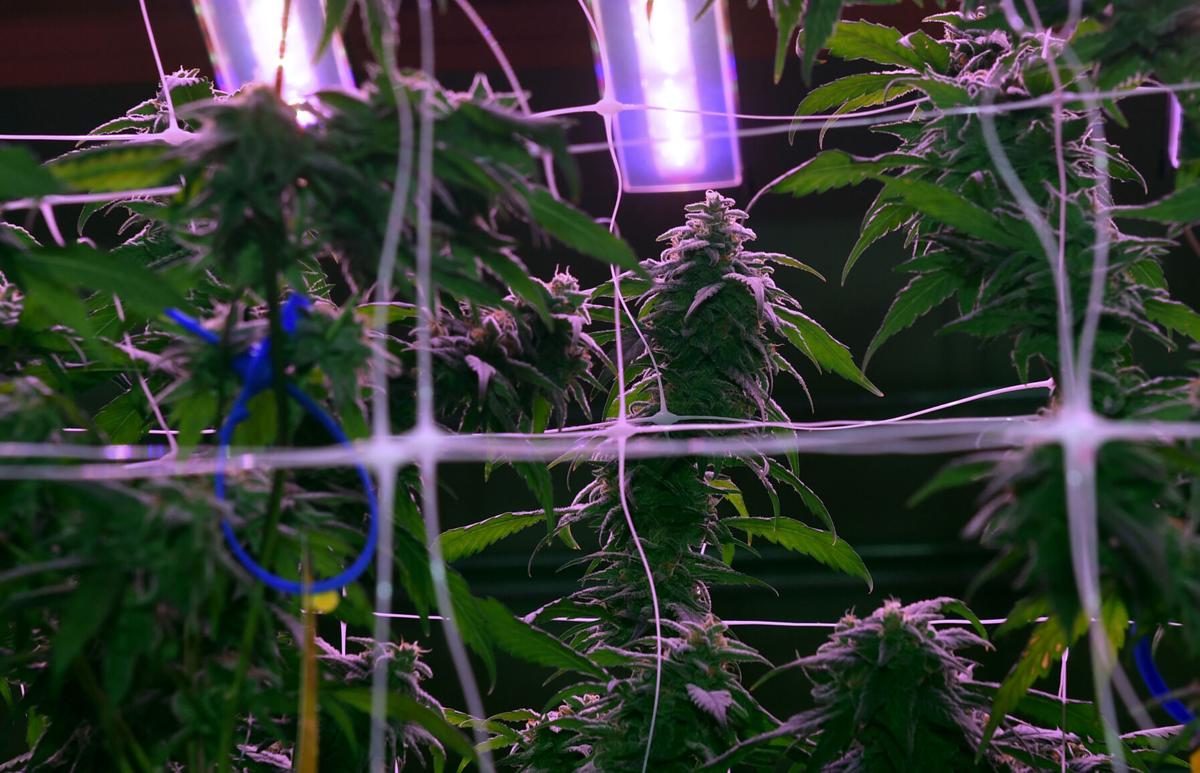 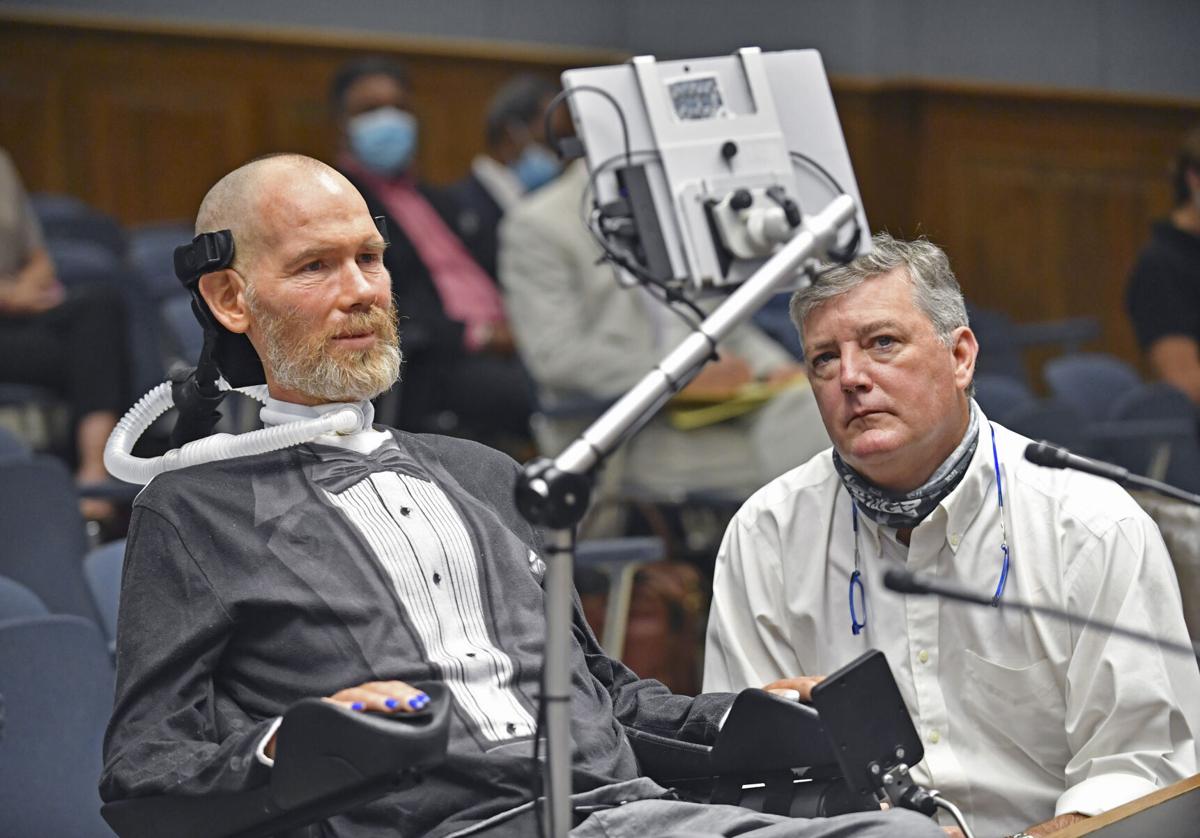 Steve Gleason gives a personal statement on his experiences with medical marijuana during a committee meeting Friday morning, August 27, 2021, at the Louisiana State Capitol in Baton Rouge, La. With him is Jefferson Parish Assessor Thomas Capella. 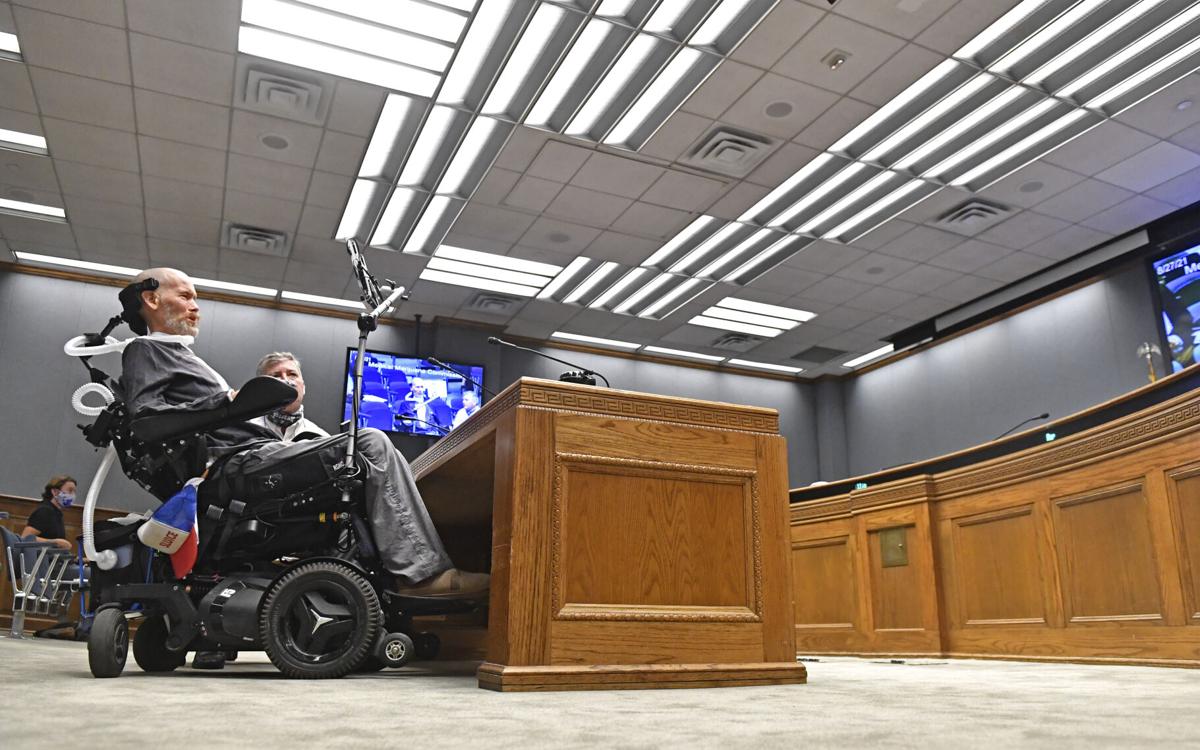 Steve Gleason gives a personal statement on his experiences with medical marijuana during a committee meeting Friday morning, August 27, 2021, at the Louisiana State Capitol in Baton Rouge, La. 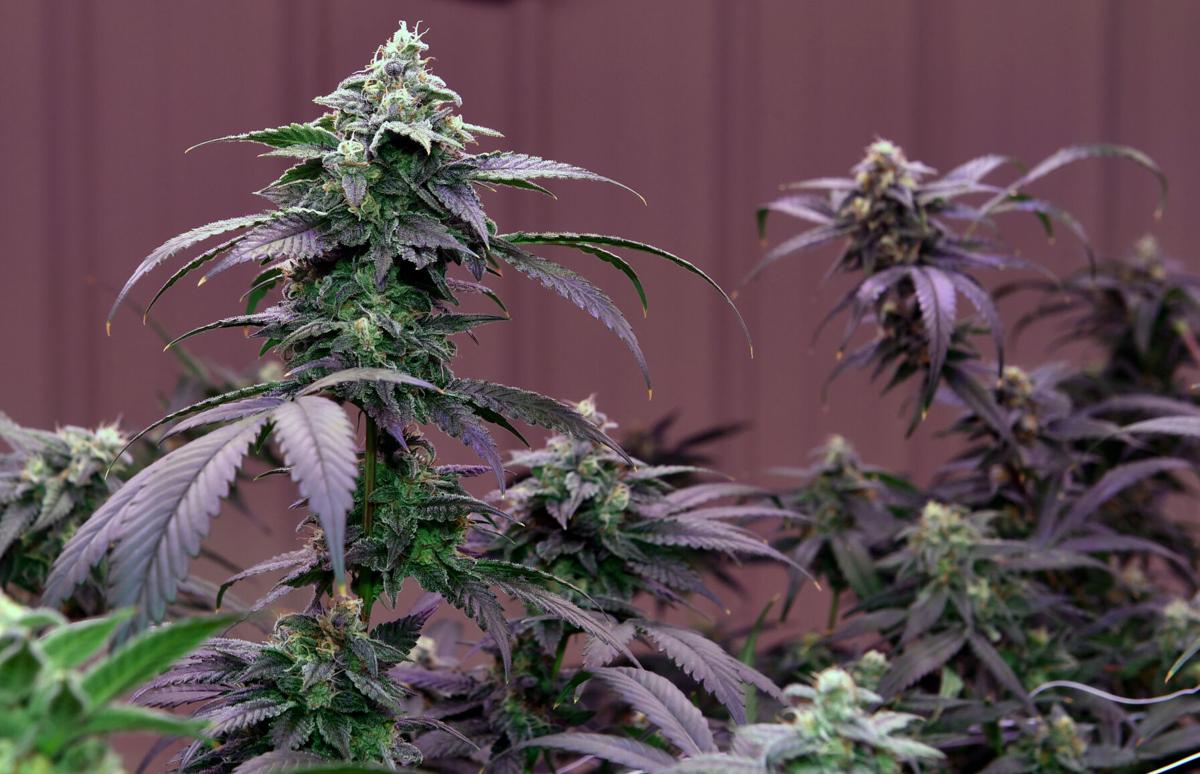 Steve Gleason gives a personal statement on his experiences with medical marijuana during a committee meeting Friday morning, August 27, 2021, at the Louisiana State Capitol in Baton Rouge, La. With him is Jefferson Parish Assessor Thomas Capella.

Steve Gleason gives a personal statement on his experiences with medical marijuana during a committee meeting Friday morning, August 27, 2021, at the Louisiana State Capitol in Baton Rouge, La.

When Louisiana’s first-ever legal medical marijuana products hit the shelves in 2019, the list of restrictions was long.

To be eligible to use them, patients had to find one of about 60 licensed doctors statewide who would recommend the drug. They had to suffer from at least one of several specific medical conditions like cancer, intractable pain or AIDS. They could only buy the drug in tincture form.

How times have changed.

Come January, the state’s licensed marijuana growers and pharmacies will be able to sell the raw, smokable flower that has long been preferred by users. Any doctor licensed to practice in the state can now recommend marijuana for as many patients as they want, for any ailment they deem fit -- they need only contact the Board of Pharmacy to get Schedule 1 privileges added to their license. The number of doctors prescribing the drug has nearly quadrupled, from 59 in 2019 to 219 in the second quarter of this year.

In short, getting legal marijuana in Louisiana has gotten far easier. And the state’s pot program, once considered an extreme outlier for its burdensome rules, is starting to resemble those of some of the 36 other states who have legalized the drug for medicinal use.

“I think a lot of people don’t realize that this exists and that it’s so accessible now,” said T.J. Woodard, the pharmacist in charge at Capitol Wellness Solutions, the marijuana pharmacy off Essen Lane in Baton Rouge.

State Sen. Fred Mills, R-Parks, a pharmacist, is widely credited with navigating the tricky political waters in Baton Rouge to bring Louisiana’s medical marijuana program to life in 2015 and 2016.

He says that in order to do so he had to craft a compromise. He envisioned a program that would allow doctors to decide when and how to prescribe marijuana, as is the case now. But to win over the powerful Louisiana Sheriffs Association and Louisiana District Attorneys Association, Mills had to agree to some onerous rules.

“I realized that we had such opposition between the sheriffs and the DAs and the different forces of law enforcement that I had to really, really crawl before we walked, and we had to prove the model worked,” Mills said.

That meant the Republican-led Legislature passed laws that only allowed certain non-smokable forms of the drug: only tinctures were permitted.

To be allowed to “recommend” the drug to patients, a doctor needed to get a special permit from the state Board of Medical Examiners to “recommend” the drug to patients. Only 60 doctors would be allowed, and each one had a cap of 100 patients each. After Gov. John Bel Edwards signed the framework into law in 2016, marijuana was only to be allowed for people with cancer, HIV/AIDS, wasting syndrome, seizure disorders and spasticity, Crohn’s disease, muscular dystrophy or multiple sclerosis.

But over the last couple of years, views on marijuana among the state’s conservative lawmakers have taken a striking turn. Sheriffs and district attorneys are largely neutral or supportive of medical marijuana. During this year’s regular legislative session, several Republican lawmakers who said they were once skeptical of the drug testified that they now can point to family members and friends who have seen their symptoms improve from using it.

Separate from the medical marijuana program, the conservative Legislature agreed this year to decriminalize possession of up to a half-ounce of marijuana. That means people caught on the street with relatively small amounts of non-medical pot won't go to jail; instead they'll only get a fine. That represented a stark turnaround from the state's decades-long harsh stance on pot.

Some of those same lawmakers also sponsored legislation to loosen the medical marijuana program. Since the laws setting the program in motion were passed in 2015 and 2016, the Legislature and Edwards have agreed to allow doctors to recommend the drug to any patient for any ailment for which they think marijuana could help. They allowed the marijuana pharmacies to sell “metered-dose inhalers," or vapes. Rules saying doctors can only recommend the drug to a certain number of patients -- and that they had to try alternative methods first -- disappeared. So did caps on the amount of THC, the chemical that elicits a high, in each package.

And in the most significant move to date, Edwards this year signed into law a bill by Speaker Pro Tem Tanner Magee, R-Houma, that will let pharmacies sell the smokable flower -- think joints -- to patients, starting in January.

“Sometimes when your phone doesn’t ring with problems it means things are going well,” Mills said. “I can’t remember the last time a patient or regulator called me with a problem. My phone used to ring off the wall with people who thought the program was too restrictive.”

Now, perhaps the last vestige of Louisiana’s timid entrance into the medical marijuana world is the limited number of growers and pharmacies allowed to dispense the drug. Only two growers -- private firms hired by the agricultural centers of LSU and Southern University, respectively -- are licensed in the state, and only nine pharmacies may dispense the drug.

By comparison, Arkansas, which has just over half the population of Louisiana, had 29 operating dispensaries and five growers last year, according to a state report.

Louisiana lawmakers have agreed to eliminate the possibility of jail time for possession of small amounts of marijuana, a sharp change in the …

A new task force that met recently for the first time is looking at whether Louisiana should allow more people in on the growing and dispensing of marijuana. Rep. Joe Marino, a Gretna independent, is heading the committee after failing to get enough support for a bill to let another grower get a coveted license. But the effort to expand could face pushback from the companies and institutions who currently enjoy a monopoly on the industry. They say there is too much supply already.

“If we go in and make changes we’re going to upset some apple carts,” Marino said in an interview. “That’s not my concern. My concern is getting medicine to patients.”

LSU’s growing partner recently took on several new investors and a management team of Arkansas marijuana growers. The company, previously known as GB Sciences before being bought out and renamed Wellcana, has rebranded again, to Good Day Farm Louisiana. Terrence Fitch, a former Coca-Cola executive who oversaw marijuana grows in Colorado, chairs the firm. Stephen LaFrance Jr., a former owner of a large private pharmacy chain and an Arkansas medical marijuana grower, and Peyton Bush, an executive at New Orleans-based Bollinger Enterprises, are among the board members.

The Louisiana Department of Agriculture and Forestry, which regulates marijuana growing, approved the ownership change earlier this month after a lengthy suitability investigation required when equity changes hands in the state’s marijuana industry.

With the new investment, Good Day Farm raised $55 million, said John Davis, the firm's president. Ahead of the rollout of marijuana flower in January, the company is expanding its footprint: Good Day Farm bought a 225,000-square-foot facility in Ruston where it will grow and produce medical marijuana. Davis is the husband of Rep. Paula Davis, a Baton Rouge Republican who has become a leader in the state House.

The company has been growing marijuana in a smaller facility in south Baton Rouge since 2018. Davis said the company is currently “overproducing,” and is packaging flower and freezing it until it can be legally sold in January.

“We’re prepared to supply whatever the market brings,” Davis said.

Louisiana’s medical marijuana industry had a sluggish start. When LSU and GB Sciences finally began supplying pharmacies, in mid-2019, only 2,762 patients had signed up to buy it, according to records from the Louisiana Board of Pharmacy.

In the second quarter of this year, 12,288 patients filled a marijuana recommendation, and 219 doctors were prescribing it. In all, 21,964 patients have gotten medical marijuana in Louisiana since the program’s inception. There's reason to think those numbers could grow steeply. In Arkansas last year, about 43,000 people were approved for medical marijuana cards, which lets dispensaries sell flower.

“It’s the de-stigmatization of medical marijuana,” said Ruston Henry, owner of the marijuana pharmacy in New Orleans, H&W Drug Store. “You’ve got people who are using this product and seeing significant results...The word is spreading out among patients and the doctors. Especially with this opioid crisis, medical marijuana is a viable alternative to opioids.”

Dr. Victor Chou, who runs a medical marijuana clinic in Baton Rouge, said the loosening of rules for doctors has made a big impact. He said “by far,” the majority of his patients get marijuana for chronic pain, followed by mental health conditions like anxiety, insomnia or post-traumatic stress disorder. Under previous regulations, those patients may have had to go to a psychiatrist first.

Steve Gleason, the New Orleans Saints icon who has lived with ALS for the past decade, recently emerged as perhaps the most well-known public advocate for medical marijuana in Louisiana.

Gleason told lawmakers on a new medical marijuana commission that in around 2013, his doctor-prescribed cocktail of pain and anxiety medication made him feel like a “zombie,” giving him severe side effects that caused him to spiral psychologically and physically.

A friend who lived in a state where medical marijuana was legal offered him a tincture bottle. Gleason decided he’d rather break the law than continue with that “anguish," and he tried it.

“I felt healthy. I felt energized. I felt free,” Gleason said. “Free from the downward spiral my body and my mind had experienced with pain and anxiety pills.”