The letter, addressed to the Louisiana Legislature's Senate Select Committee on Women and Children, comes one week after top LSU officials testified before the committee about the progress that they have made on Title IX over the past year. Title IX is the federal law that forbids institutions from discriminating based on sex, and requires them to investigate reports of sexual misconduct and domestic violence on campus. 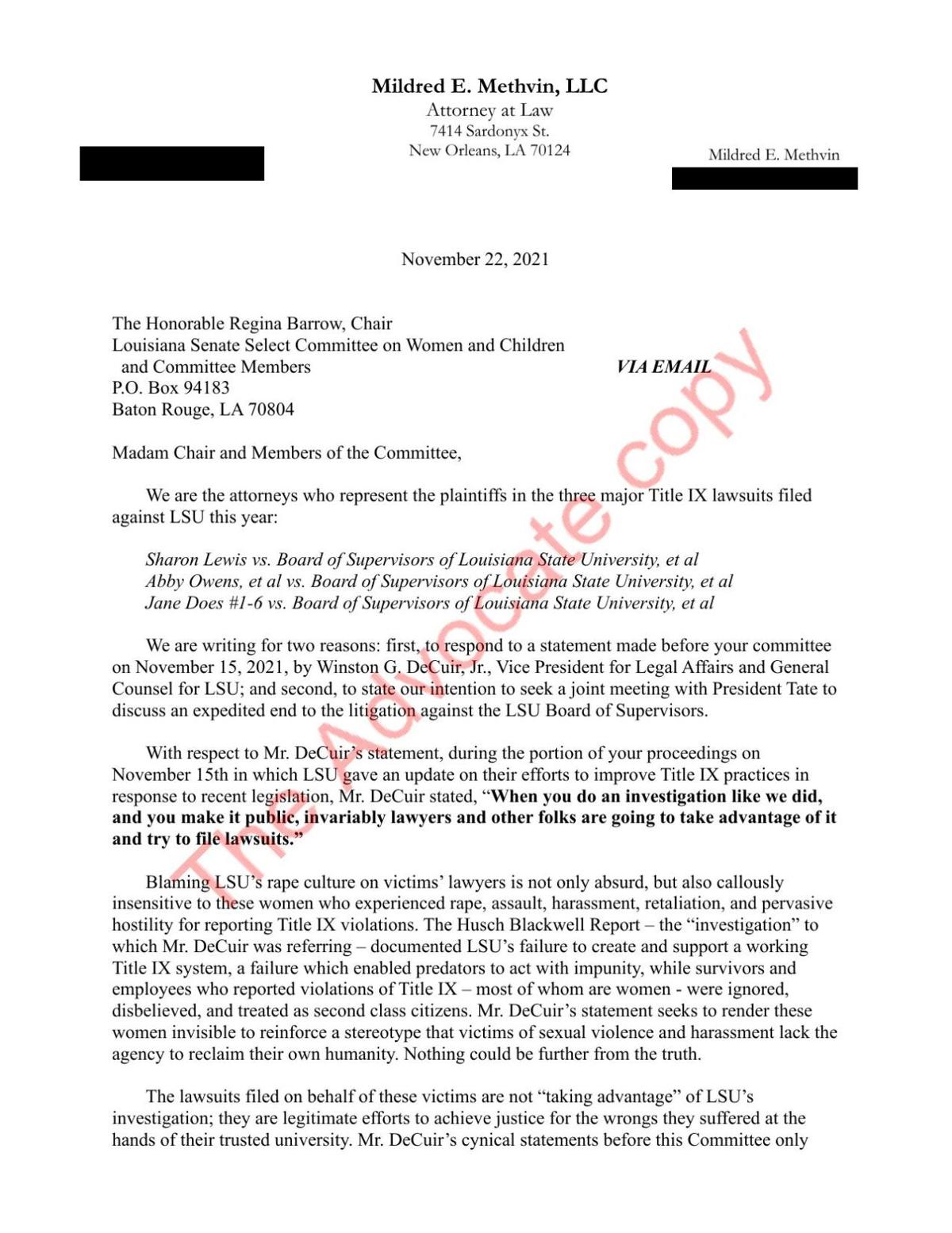 During his Nov. 15 testimony before the committee, LSU General Counsel Winston DeCuir, Jr. described how LSU was already facing three lawsuits "that have arisen out of our Title IX investigation last year." LSU commissioned the law firm Husch Blackwell to report on its Title IX shortcomings, and the firm released a report in March.

DeCuir warned legislators that he expects LSU to face more lawsuits over the next few months. But he blamed the lawsuits on litigation-hungry lawyers rather than shortcomings on the university's part.

LSU says football coaching search will factor in Title IX. How does that affect top contenders?

After a year of sexual misconduct scandals at LSU, many implicating high-profile athletes and athletics officials, university officials are pr…

"When you do an investigation like we did, and you make it public, invariably, lawyers and other folks are going to take advantage of it and try to file lawsuits," DeCuir said. "So I just wouldn’t want you to be surprised, it’s not new stuff happening, but people are frankly trying to recruit folks from the investigation to file additional lawsuits. And so we’ve been managing it, we’ve been protective of the state fisc and we’re just handling them as best as we can.”

The lawyers who have filed suit over LSU's Title IX failures say that DeCuir's comments carry on a long tradition of victim-blaming. Though the three Title IX lawsuits against LSU are separate, the attorneys who filed them teamed up to write the letter.

They sent it Monday to the same legislators who heard DeCuir's testimony.

"Blaming LSU’s rape culture on victims’ lawyers is not only absurd, but also callously insensitive to these women who experienced rape, assault, harassment, retaliation, and pervasive hostility for reporting Title IX violations," reads the letter.

The lawyers wrote that the reasons for suing LSU are valid: the university had a broken Title IX system, and they say those who tried to report violations were ignored and treated as second-class citizens.

"The lawsuits filed on behalf of these victims are not 'taking advantage' of LSU’s investigation; they are legitimate efforts to achieve justice for the wrongs they suffered at the hands of their trusted university," the letter states. "Mr. DeCuir’s cynical statements before this Committee only serve to compound the trauma already endured by the LSU students and employees we represent."

The letter's signatories include attorneys Mimi Methvin and Elwood Stevens, who represent six women in the most recent Title IX lawsuit filed against LSU. Their clients allege various forms of rape and sexual misconduct on the part of a former LSU French graduate student, Edouard d'Espalungue D'Arros. They filed their lawsuit in October.

The letter was also signed by Karen Truszkowski, Elizabeth Abdnour, Catherine Lasky and Endya Hash. They represent 10 women who filed suit against LSU in April, describing sexual misconduct from people on campus ranging from football players to professors and failures to report it.

And the letter also includes signatures from Tammye Campbell Brown, Bridgett Brown and Larry English. They represent LSU Associate Athletic Director Sharon Lewis, who filed a lawsuit against LSU in April that said she was retaliated against for attempting to report that former LSU football coach Les Miles was sexually harassing students. Miles, who is also a defendant in her lawsuit, has denied those allegations.

The letter cites a recent statement from LSU President William Tate IV, who said he is committed to building a culture of "transparency, trust and accountability" to protect survivors and deter sexual violence on campus.

"Mr. DeCuir’s statements before this Committee contradict this commitment by suggesting survivors and reporting employees are opportunists and liars," the letter says. "No wonder so few women on our university campuses trust that they will be taken seriously and fear that they will be personally attacked if they report sexual assaults, harassment, or power-based violence. This must change."

Why didn't LSU fire Ed Orgeron 'for cause'? It has a history of protecting coaches who win

Amid a metastasizing Title IX scandal at LSU, football coach Ed Orgeron was named as a defendant in a major sex discrimination lawsuit against…

The letter ends with a request: the attorneys are asking Tate to "discuss an end to the subject litigation" against LSU and a shared vision for a better Title IX program for the university. LSU has beefed up its Title IX operations significantly, hiring several employees and budgeting $2.5 million for the Office of Civil Rights and Title IX this year.

"We believe that only through an open, candid, and inclusive conversation is there potential to right past wrongs and allow LSU to focus on its future vision for a gold-standard Title IX program," the letter says.

Chanting “this campus is mine, protect me Title IX,” about 100 LSU students marched through campus Monday afternoon to protest LSU’s failure t…