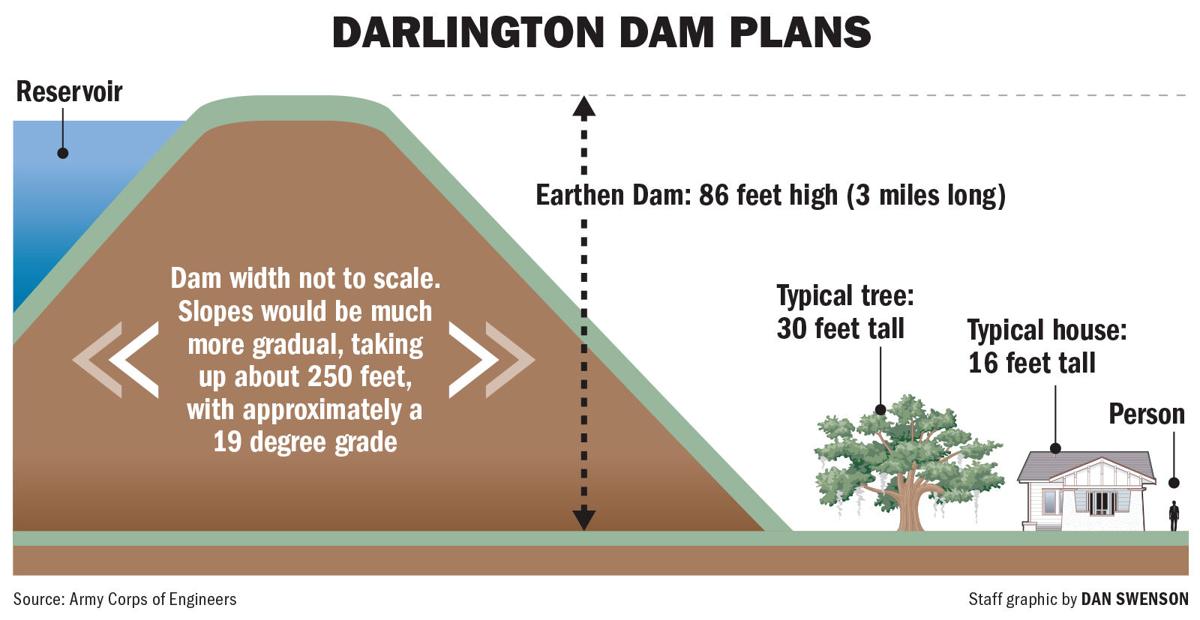 The $2.3 billion dam would contain what’s known as a dry reservoir. It would only intermittently hold back water during severe rain events. At other times, lands behind the dam would be dry. The graphic below shows what water levels would be like when the dam is closed. 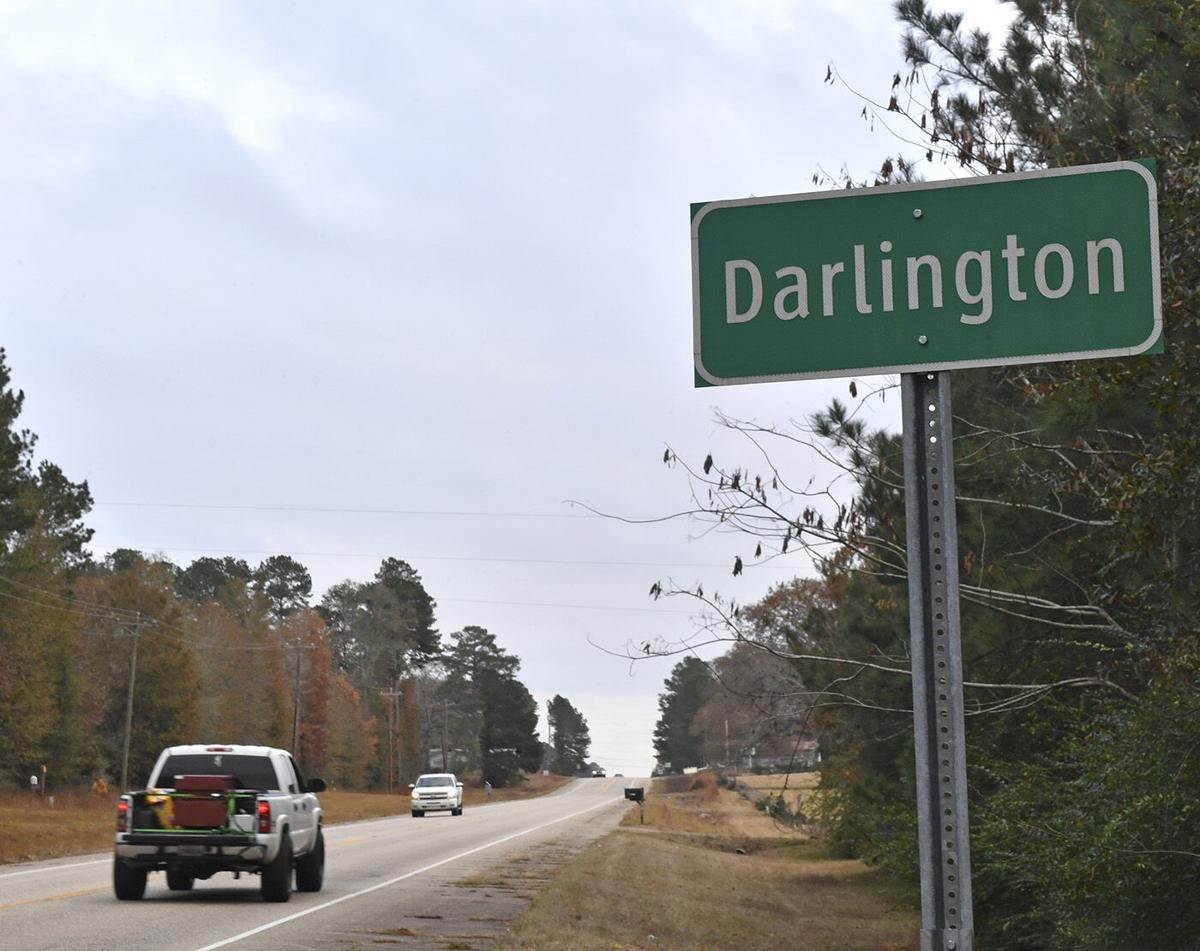 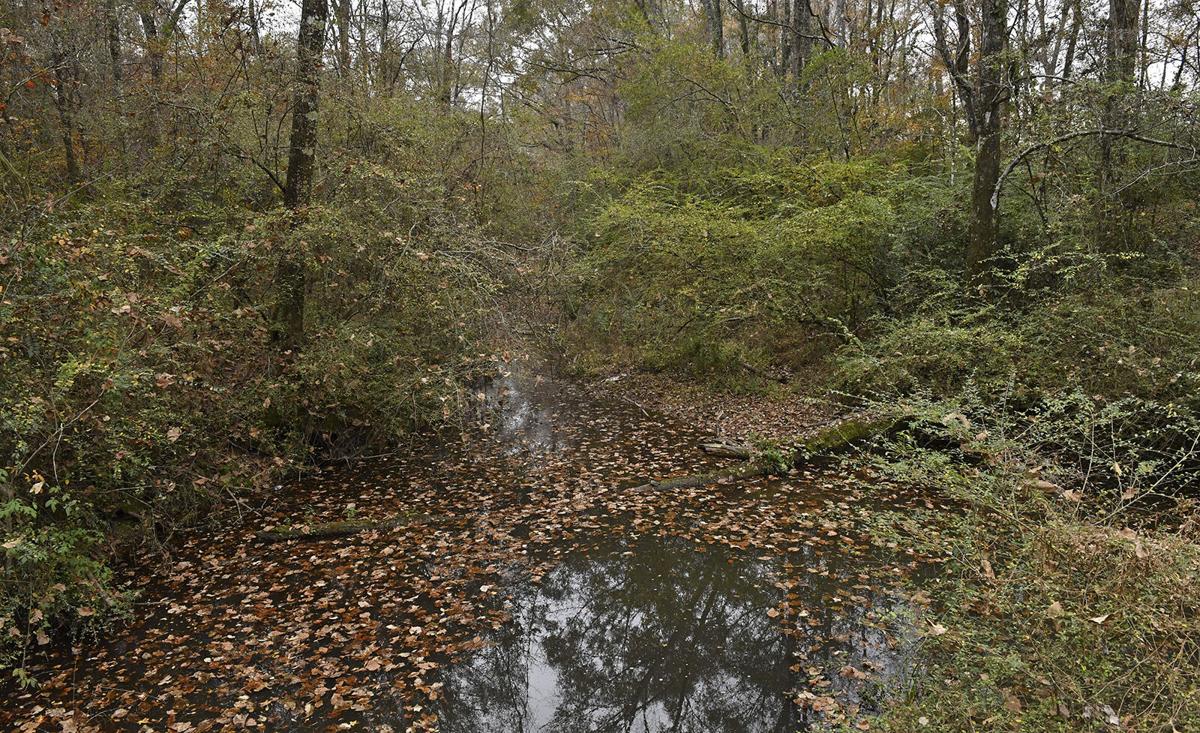 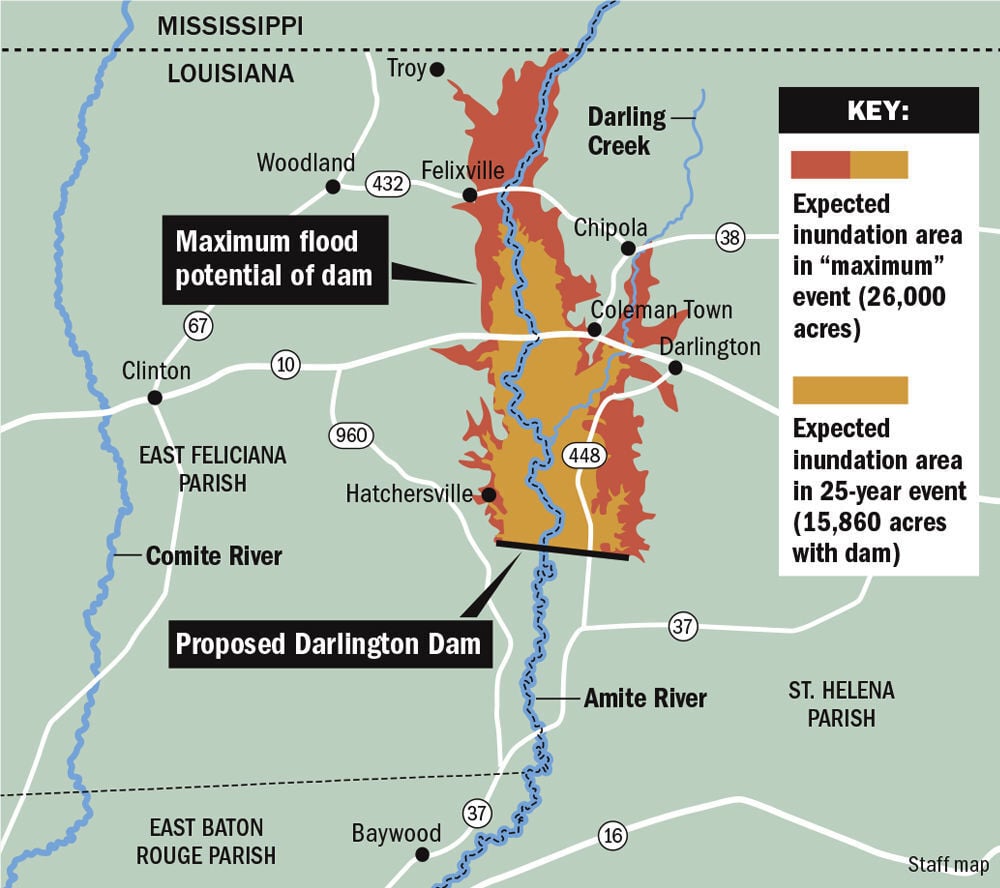 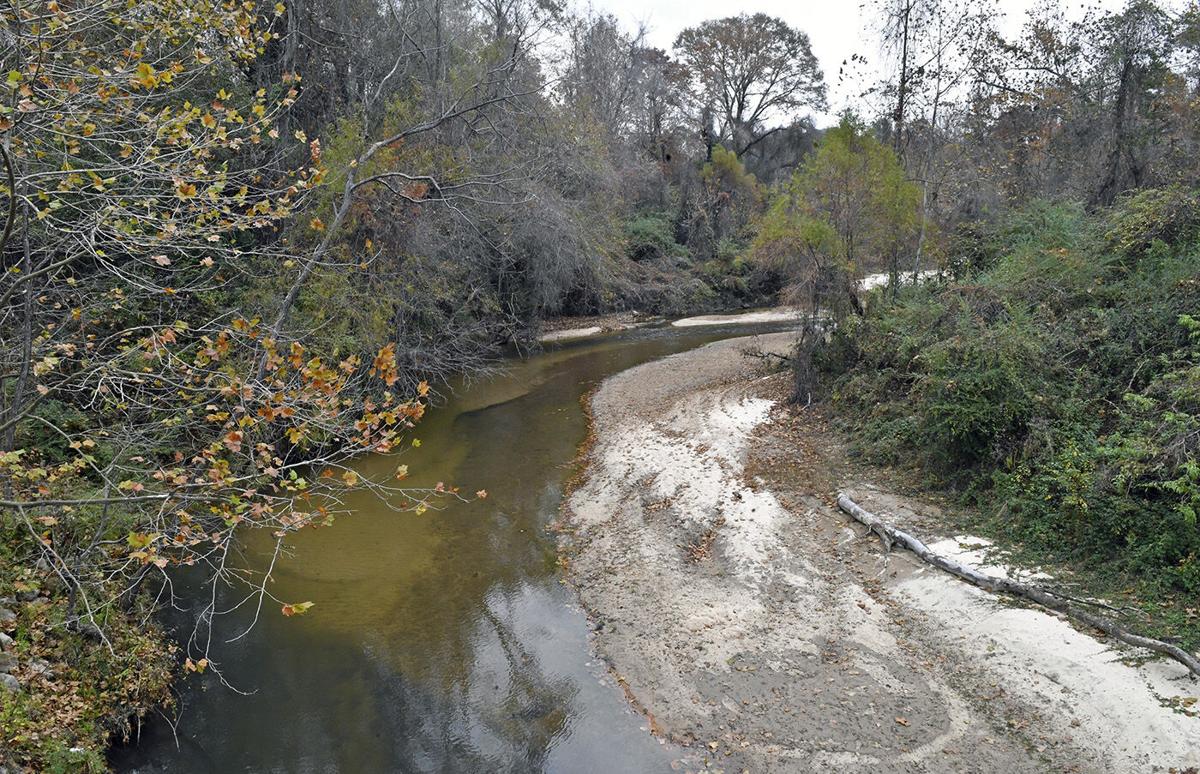 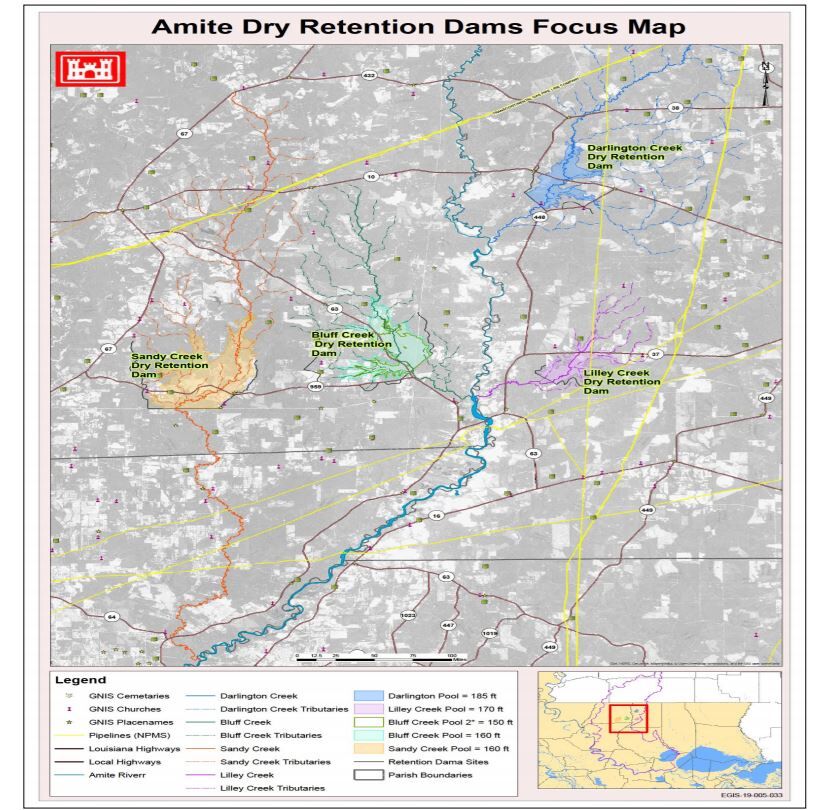 The $2.3 billion dam would contain what’s known as a dry reservoir. It would only intermittently hold back water during severe rain events. At other times, lands behind the dam would be dry. The graphic below shows what water levels would be like when the dam is closed.

The U.S. Army Corps of Engineers wants to take 3½ additional years and spend an extra $6 million to study the proposed Darlington Dry Dam and better assess the risk of catastrophic failure and its impact on minority communities and archaeological sites.

A Darlington dam has long been considered an option to relieve flooding on the Amite River through heavily populated areas of East Baton Rouge, Ascension and Livingston parishes.

The Corps had hoped to seek congressional authorization and funding sometime in late 2021, but now wants to further explore soil conditions and perform other field work to ensure the proposed 3.6-mile-long, 86-foot-tall earthen structure is safe.

Darlington Dam dilemma: Should they sacrifice rural way of life to address flooding in other areas? (copy)

The delay for the Darlington Dry Dam means the $1.3 billion dam and the $1 billion in related downstream home elevation and floodproofing projects wouldn't be in a position for potential Congressional construction authorization and funding until after April 2025, agency officials said.

Corps officials say before they pursue a chief's report, which under internal Corps processes sets the stage for seeking Congress's blessing, they want to accelerate the field work that would normally have come later. This next level of study, for which the New Orleans district is still seeking internal agency approval, would be completely federally funded, Corps officials said.

The tentative dam concept, which had been subject to public comments last year, received the Corps' early backing in April despite opposition from the East Feliciana and St. Helena parish police juries and concerns from the region's timber industry.

The dam proposed across the upper Amite River in southern St. Helena and East Feliciana parishes just north of Grangeville would not block the river permanently but have three gates that could be closed during severe rain, holding back water temporarily until it could be safely released downstream.

Though some have questioned the ability to fund the proposal, the $2.3 billion combined project is seen by state Rep. Valarie Hodges, R-Denham Springs, and some others as an important protection measure after the devastation of the August 2016 flood, along with the Comite River Diversion Canal now under construction and with planned waterway clearing in East Baton Rouge Parish.

The dam could offer significant flood reduction potential for the populous Amite River Basin. The Amite at Denham Springs would see a 6.5-foot reduction in water levels during a 25-year flood event. A 25-year event has a 4% chance of happening in any year.

But Carriere and other Corps officials have emphasized in recent months, that any proposal to build a dam inherently involves life and safety risk so the "stakes are high." Corps officials have pointed to a state dam official association's figures showing 173 dams had failed between January 2005 and June 2013.

Corps officials noted that any failure of the Darlington Dam in a worst-case, high-flood condition, while unlikely, could mean the release of a wall of water down the Amite just north of the basin's most populated section in East Baton Rouge and Livingston parishes.

The dam also raises potentially significant environmental justice and archaeological concerns on the lands upstream of the dam that would require buyouts.

The primary flood footprint of the dam would affect 700 landowners and 365 structures that would need buyout and affect a few hundred "cultural resource sites," including cemeteries, the Corps' latest feasibility report says.

That early analysis suggested more than 70 percent of the people living in that flood footprint are minorities and nearly a quarter of them live below the poverty line.

Darlington dam project met by opposition from St. Helena Police Jury: 'the biggest threat to our way of life'

The St. Helena Parish Police Jury weighed in Tuesday against the revival of a proposed U.S. Army Corps of Engineers dam that would periodicall…

During Carriere's presentation last week to the task force, which is headed by Hodges, Carriere prefaced the Corps of Engineers' latest plans with a brief history lesson in past catastrophic failures of earthen dams.

Carriere singled out the June 1976 failure of the U.S. Bureau of Land Management's Teton Dam in Idaho. The collapse happened while the dam was being filled for the first time, caused $2 billion in damages and cost the federal government $300 million in claims.

"There was a very heavy push to get it constructed without the proper engineering analysis, and this dam failed during construction and killed 11 people," Carriere said.

That structure suffered from poor soil conditions that Carriere and other Corps officials say are akin what may underlie the proposed Darlington Dry Dam.

The Darlington Dry Dam's poor soil conditions were noted in past studies in the late 1980s and 1990s that led to more costly engineering solutions that helped make early proposals for a permanent dam reservoir less appealing on a cost-benefit basis.

The Corps of Engineers latest feasibility work on the dam relies on 11 soil borings and two trenches dug in the early to mid-1990s and no new field work, the Corps' latest analysis says.

The U.S. Army Corps of Engineers will take soil samples in St. Helena Parish from the site of the proposed Darlington Reservoir, a corps proje…

With so much still uncertain, Sarah Bradley, Corps senior project manager, said in a online presentation last month that the agency doesn't want to pursue Congressional authorization and funding only to find out in more detailed design that the dam can't be built safely.

"We need to know now what's out there to ensure we have something we can move forward on, if construction authority is provided by Congress," she said.

Reaction from task force members to the Corps of Engineers latest announcement was relatively muted last week as members focused more what usage rights landowners affected by the dam could retain, especially hunters and farmers who use the woods in the area.

Some also questioned whether some of the archaeological and soil boring work could be done in parallel to save time, but Carriere told task force members that the cultural resources survey had to be done first before digging begins.

Reservoir proposal gets another look

U.S. Army Corps of Engineers officials on Tuesday said they have found ways to cut the cost of building the proposed Darlington Reservoir.

Dam closures would hold back water from a 25-year flood, protecting, with the home elevation program, up to 15,000 people downstream. But the dam would flood at least 12,600 acres of sparsely populated forest and farm land in St. Helena and East Feliciana parishes.

Depending on the size of the event, more intermittent flood impacts could spread across a total of nearly 26,000 acres and stretch as far north as the Mississippi state line. Under those conditions, the dam would also mitigate flooding for tens of thousands more people downstream.

In St. Helena, answers on Darlington Reservoir are in short supply from local leaders

GREENSBURG — St. Helena Parish resident Jeremy Cornette, his wife, Christy, and others showed up Tuesday to ask the Police Jury what they've b…