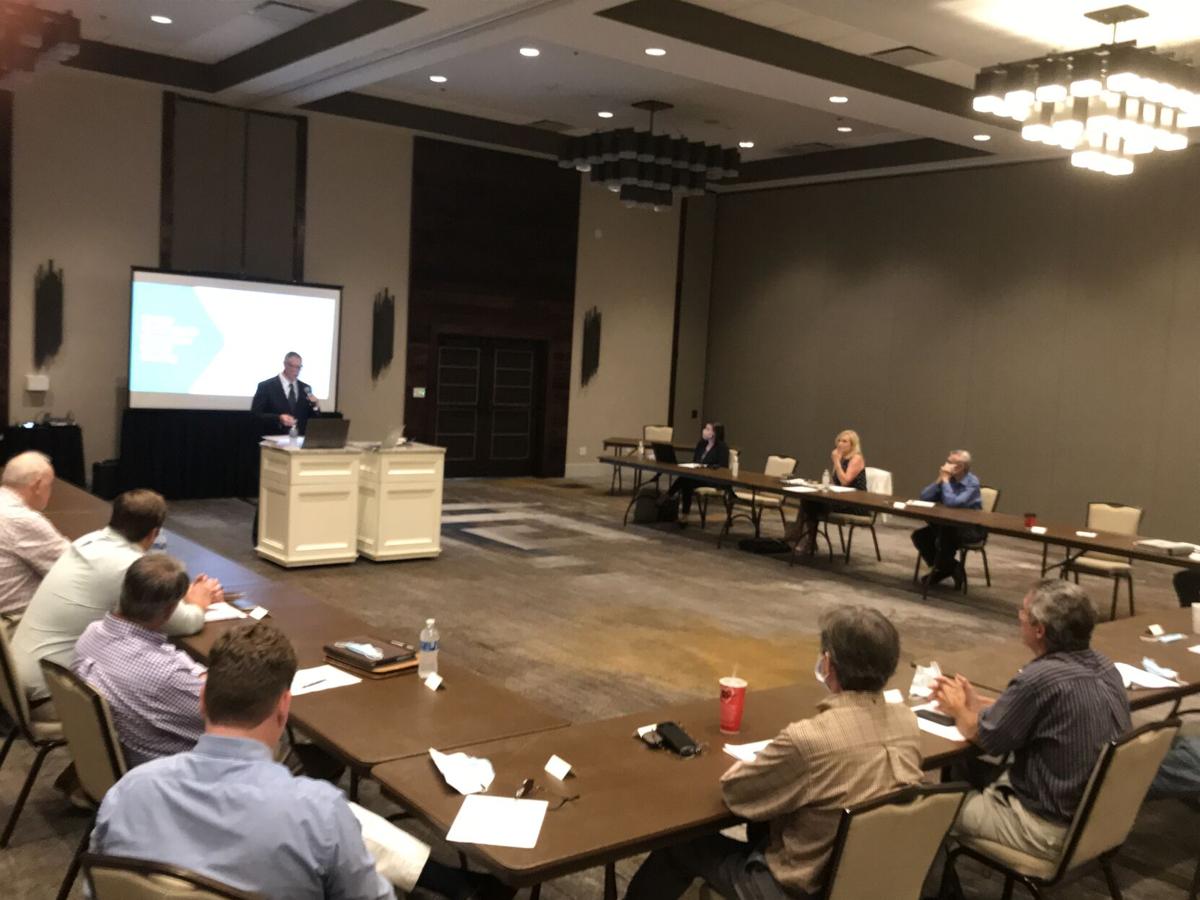 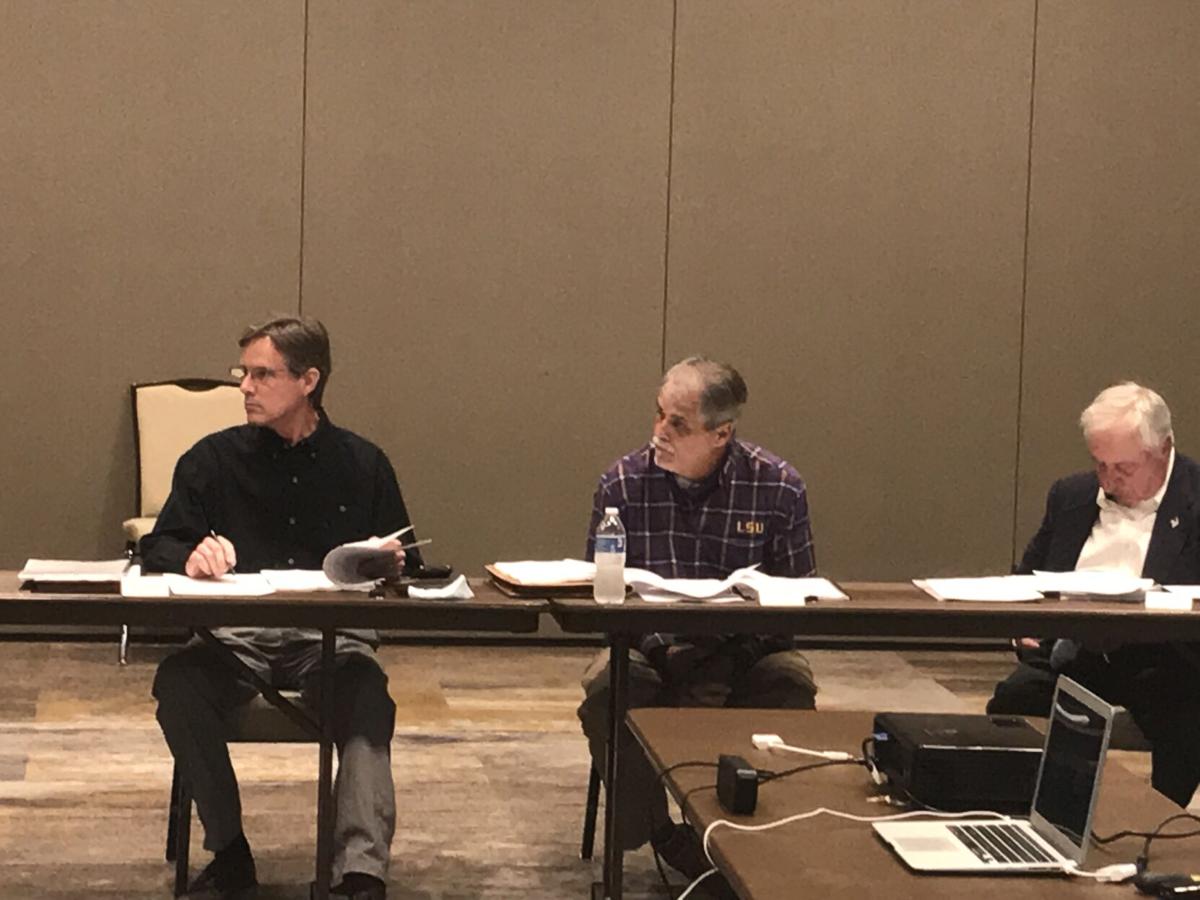 Dennis McGehee and Ryan Scardina, left and middle, two longtime employees of Baton Rouge Water Co., listen Monday, Oct. 19, 2020, during a discussion before the Capital Area Ground Water Conservation Commission in the Baton Rouge Marriott ballroom. Both men have been charged with conflict-of-interest violations by the state Board of Ethics over their service on the commission. Commissioner A. Hays Town Jr., right, sits next to the men and is looking down.

Dennis McGehee and Ryan Scardina, left and middle, two longtime employees of Baton Rouge Water Co., listen Monday, Oct. 19, 2020, during a discussion before the Capital Area Ground Water Conservation Commission in the Baton Rouge Marriott ballroom. Both men have been charged with conflict-of-interest violations by the state Board of Ethics over their service on the commission. Commissioner A. Hays Town Jr., right, sits next to the men and is looking down.

The state Board of Ethics has charged two members of a local groundwater commission with conflict-of-interest violations that, if proven, could make them subject to civil fines and put their spots on the commission at risk.

Ryan Scardina and Dennis McGehee both sit on the Capital Area Ground Water Conservation Commission, which oversees the aquifer from which much of the Baton Rouge area draws its drinking water. Both men are also long-serving employees of Baton Rouge Water Co., which the commission regulates.

That's a violation of an ethics law, charging documents say, that prohibits public servants from receiving a thing of value from a company they regulate.

Kathleen Allen, ethics administrator, said the men's civil ethics charges can now go before an administrative law judge to be decided in a public process or be resolved through a settlement.

She said on Tuesday that no hearing had been set yet for either man. Scardina and McGehee declined to comment on the charges.

The commission has authority over a six-parish area in Baton Rouge and has 18 members who are nominated by a variety of groups with an economic interest in the Southern Hills Aquifer: farmers, ranchers, industries, municipal users, state agencies and the parishes in its jurisdiction. The governor makes all the appointments.

The commission can set conservation policy for the aquifer and also sets and charges groundwater pumping fees for major users in the service of long-term management goals of the aquifer, the drinking water source for 600,000 people.

For several years, the commission has come under fire for not acting quickly enough to address creeping salt water intrusion into that aquifer.

Environmental groups like Louisiana Environmental Action Network and retired Army Lt. Gen. Russel Honore' have charged that the commission should try to push big industrial users off the aquifer and toward the Mississippi River — as other industries down-river have been doing for generations.

The salt water's encroachment into the fresh water source is directly tied to the level of pumping from the aquifer. A shift to the river, however, could be costly and also raise complications in the processes for those companies with access to cleaner groundwater.

The commission is currently working on a strategic plan for the aquifer that could propose major regulatory steps, but LEAN, Honore' and others have also accused the commissioners with industrial ties of slow-walking attempts to address the long-term salt water issue.

The commission was specifically empowered to address that problem through regulatory powers over big users when the Legislature created the commission in the mid-1970s.

LEAN filed a conflict-of-interest complaint with the commission in May 2019, targeting Scardina, McGehee and four other commissioners with alleged connections to ExxonMobil, Entergy and Georgia-Pacific, all major groundwater users regulated by the commission as Baton Rouge Water is.

Environmentalists have filed an ethics complaint against the Baton Rouge-area groundwater commission, which they allege is being run inappropr…

Marylee Orr, the executive director of LEAN who filed the complaint, said Wednesday she was surprised the Ethics Board has only brought charges against the Baton Rouge Water officials, who, she said, have been more amenable to striving toward sustainable use of the aquifer.

“Why have they not scrutinized the industry representatives, the one who represents Exxon(Mobil), one of the big users, or Georgia-Pacific, one big user, or Entergy,” Orr said. “I’m astonished.”

Ethics officials are barred from discussing the complaints that originate their investigations and the probes remain behind closed doors unless charges are filed or a consent opinion is reached, Allen said.

Allen wouldn’t confirm or deny the existence of the LEAN complaint, if it was related to the charges brought against Scardina and McGehee, or discuss their cases.

As of Wednesday, online search windows on the Ethics Board website show none of those other commissioners had been charged or agreed to a consent opinion.

The board can also close a case and give a private warning, which isn’t public, Allen said, but the person who filed a complaint and those who are subject to the complaint are notified about the ultimate resolution, whether public or private.

Orr said she hasn’t been notified about any of the commissioners and only learned about Scardina and McGehee after she heard second hand that their charges were on the ethics website.

They were charged by the Ethics Board on July 2, documents say.

The local groundwater commission has failed to effectively regulate the aquifer beneath Baton Rouge, threatening further saltwater intrusion a…

Speaking generally, Allen said the ethics code focuses on private sector pay for current services rendered from a regulated company and considers that pay a prohibited source of income for the public servant on a state board or commission.

“It’s that kind of appearance of impropriety of receiving something from someone who’s regulated by your agency,” Allen said.

Baton Rouge Water has 65 groundwater wells in the Southern Hills Aquifer. In 2018, the company withdrew 24.2 billion gallons of water, the largest of any single user regulated by the commission.

Allen added that some state boards and commissions have exemptions so members who work for companies under their purview can serve on a board.

The Ethics Board has also drawn distinctions for public servants who receive retirement or health benefits from regulated entities.

Commissioner Joey Normand, an Entergy retiree, received an advisory opinion in August 2019 that he could serve despite his Entergy health benefits and stock because they did not stem from current services rendered.

Other commissioners named in LEAN’s complaint are Nelson Morvant, an environmental specialist for Entergy with years of experience as a groundwater geologist, Ronnie Albritton, a Georgia-Pacific employee for 27 years; Todd Talbot, an infrastructure lead for ExxonMobil in the Baton Rouge area whose experience has included management of its river and well water systems; and Mark Walton, an Entergy retiree.

A spokesman for Georgia-Pacific declined to comment. Talbot couldn’t be reached, nor a company spokesman.

Walton said he doesn’t believe he is subject to an ethics probe because he no longer works for Entergy and only draws his retirement from the utility.

He said hasn’t received any sort of notification that he was under scrutiny, as ethics officials say would be normal practice.

In his 33 years on the commission, Walton said he has acted in the interest of Entergy, ExxonMobil and all the other users of the aquifer to ensure it is sustainable for the future.

A commission that regulates use of an aquifer that supplies drinking water to more than 600,000 people declined to pick a new director this we…