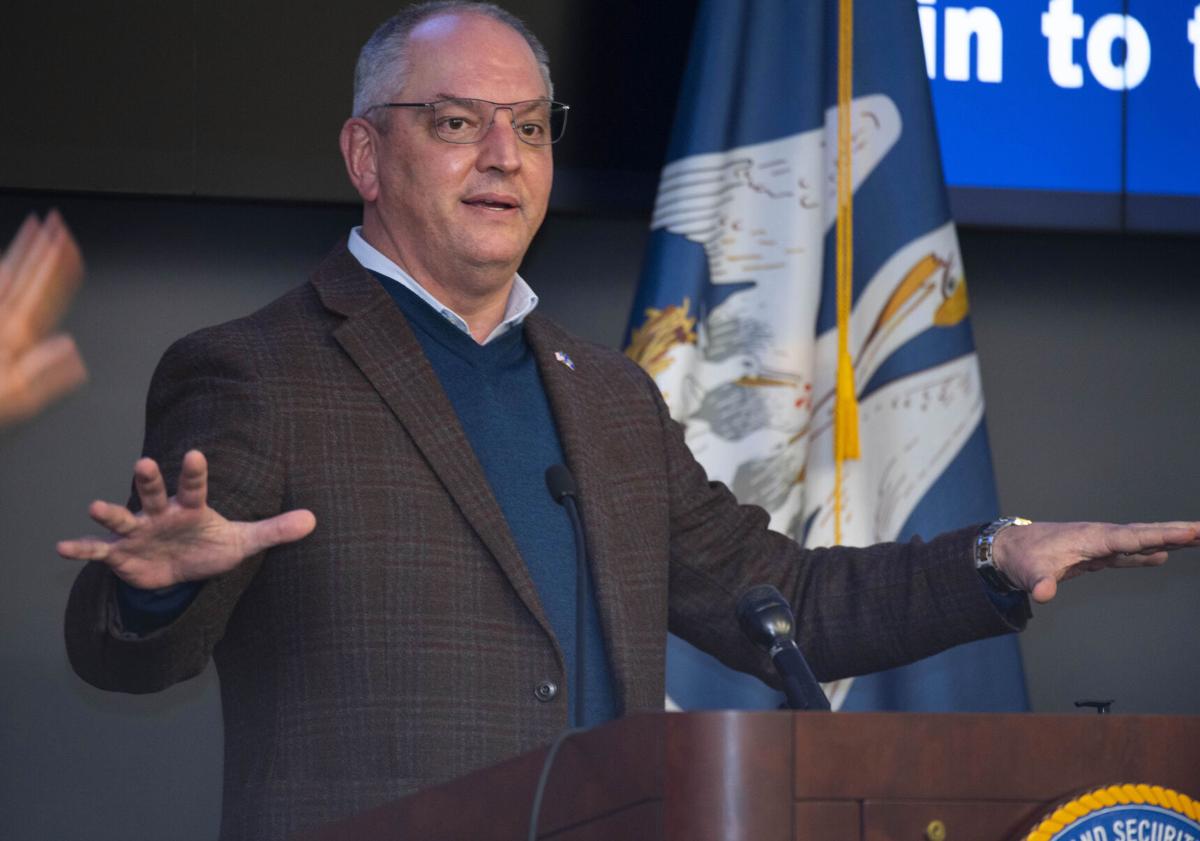 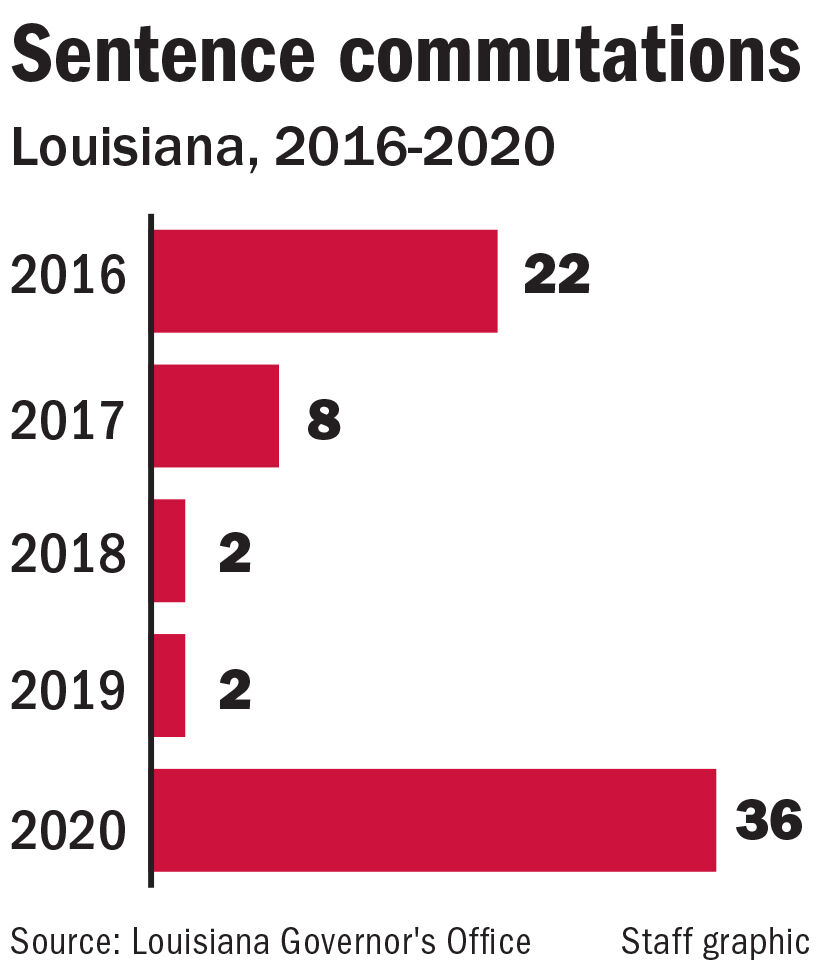 Duong "Calvin" Cao had served 17 years in prison on an attempted murder conviction when he went before the Louisiana pardon board in 2015 and received a favorable recommendation for early release because officials considered him rehabilitated.

That board decision left him one step away from freedom. All he needed was a signature from the governor.

Cao would wait another five years for the signature. During that time, he worked in the governor's mansion and at State Police headquarters — both coveted jobs reserved for the most trusted inmates — before a positive coronavirus diagnosis took him out of commission for over a month.

He recovered and was ultimately released from prison in September — one of 36 people whose sentences Gov. John Bel Edwards commuted last year, allowing them a chance at parole. All were convicted of violent crimes decades earlier and were deemed low risk to public safety.

Edwards, a Democratic governor who has championed criminal justice reform, granted more sentence commutations in 2020 than during his entire first term in office, when records show he awarded 34. Edwards took action quietly, granting the awards at a steady pace throughout the year.

Some of the recipients, including Cao, had received a favorable recommendation from the board under former Gov. Bobby Jindal, who largely rejected the clemency process and granted just three commutations during his eight years in office.

Almost no one who applies for a commutation actually gets one. But they're the only possible relief mechanism for the thousands of people serving life and other decades-long sentences in Louisiana, which holds the highest incarceration rate in the country, in part due to harsh sentencing laws and "tough on crime" policies that many other states have rejected in recent years.

Edwards also granted 24 pardons in 2020. Those usually apply to people who have finished serving their sentences, often for more minor crimes, and have requested that the offense is removed from their record. Pardons are typically more common and easier to obtain than commutations.

While grateful for his freedom and committed to building a productive life in society, Cao is puzzled about the clemency process and the governor's recent decision, which ultimately shaved off about two years of his 30-year prison sentence. He wonders: "Why now? Where's the logic?"

Cao said he understands the political risks associated with granting clemency, but "when month after month becomes year after year of waiting — when the governor could release you to your family with just the stroke of a pen, but he chooses not to — you start to lose hope."

Many clemency cases move more quickly, but Edwards has not explained his thought process or the factors he weighs most heavily. In response to a request for comment last week, his office said only that he "takes this part of his job very seriously and considers each request separately, completely and deeply. He will continue to give each decision the time and concern that it deserves."

There are dozens more applications still sitting on his desk. Those are inmates who received favorable decisions from the Louisiana Board of Pardons and Parole, a panel of experts appointed by the governor who complete their own stringent review process of each case.

Will Gov. John Bel Edwards ramp up use of clemency power as part of criminal justice reform efforts?

For much of Louisiana's history, people sentenced to life in prison were routinely released on parole after serving about a decade behind bars…

Edwards won reelection in 2019 despite Republican groups blasting him for supporting sentencing reform. He championed a package of reforms in 2017, which softened sentences for minor and nonviolent crimes but stopped short of expanding parole for people convicted of serious violent offenses.

The reforms were limited largely because of opposition from prosecutors and law enforcement leaders. Those groups often oppose clemency awards for similar reasons — because they believe in the importance of delivering definitive justice for victims and their families.

Edwards has pledged to continue pushing for criminal justice reform, though the coronavirus pandemic largely derailed the 2020 legislative session.

Prisoner rights advocates commended Edwards for increasing his use of clemency in 2020, though their calls for additional action became even more urgent amid the pandemic. Those demands were echoed across the nation as advocates asked governors to release medically vulnerable inmates and reduce state prison populations.

Edwards hasn't revealed whether health concerns factored into his decision to award more commutations, and experts say most governors ended up doing little to address the imminent spread of COVID-19 through state prisons. Louisiana officials created a special new board last spring to consider a select group of inmates for early parole during the pandemic, but that program was short lived and had a negligible impact on the prison population.

At least 32 state prisoners and five staff members have died from COVID-19 since the virus arrived in Louisiana last year, according to DOC data.

The head warden and medical director of Raymond Laborde Correctional Center in Avoyelles Parish have died from the coronavirus, state official…

"Overall the response has been disappointing," said Kevin Ring, president of the national nonprofit FAMM. "But there's always this stigma associated with the clemency process, the potential for political ramifications. In general, we have zero tolerance for letting people out of prison early."

That wasn't always the case, Ring noted. Clemency used to be much more common, both in Louisiana and nationwide — before a few controversial cases were met with heated political backlash and negative media coverage, according to experts.

In Louisiana, former Gov. Edwin Edwards signed 945 commutations during his first two terms starting in 1972, then another 335 during his third term.

The numbers have varied widely under subsequent administrations. Kathleen Blanco signed 129 commutations in the early 2000s, followed by Jindal's three. John Bel Edwards has now signed a total of 70 since he took office in 2016.

When Cao tested positive for coronavirus last spring, he was living at the Louisiana State Police Barracks near Zachary, which provides minimum security housing for inmates with a record of good behavior. In response to his illness, officials sent him to quarantine at Angola's Camp J, an old solitary confinement wing once used for disciplinary purposes that was closed in 2018 amid safety concerns.

Cao had spent time in Camp J over a decade ago as punishment for getting into fights. He said returning to those decrepit conditions felt like going back to square one, but this time he was also battling a serious illness.

When the state Department of Corrections started sending COVID-positive inmates to Camp J early on in the pandemic, a slew of prisoner rights groups criticized the move as inhumane.

In a letter dated May 8, dozens of advocates, attorneys and criminal justice experts implored Edwards to sign more commutations: "Your signature is the only barrier to freedom for these mothers, fathers, siblings, sons, daughters and friends."

"He … is currently being held at Camp J in Angola, a substandard medical facility that puts patients far from access to ventilators or quality medical care," advocates wrote. "He contracted the virus in DOC custody, but he could have been granted commutation months ago. He needs your signature."

Cao received that signature two months later. By then, he had recovered from COVID and returned to the barracks.

After dozens of Louisiana state prisoners have tested positive for the novel coronavirus, state officials are starting to consider releasing s…

Cao was sentenced to 30 years for attempted first-degree murder at age 19, when he shot a bystander accidentally during an altercation, according to his account. State law required him to serve 85 percent of the sentence before becoming eligible for parole.

Even after waiting five years for the governor's approval, Cao said receiving the signature gave him a new rush of optimism.

"Finally it happened," he said. "God has blessed me — the feeling everyone wants in prison. When you open that big yellow envelope and see that gold seal."

Cao was released in September after the parole board gave final approval, and he enrolled in the Louisiana Parole Project, a Baton Rouge nonprofit that provides support services and housing to people being released from prison after decades behind bars. He has since moved back to his hometown of Houma, where he's staying with his sister.

Being released from prison into the pandemic world of 2020 has been challenging, Cao said, especially because of the job market. He's struggling to find a decent job with a felony record despite the skills he acquired in prison, like carpentry, public speaking and inventory and warehouse operations.

In the meantime, he's working at his brother's convenience store. His relatives pooled their money and bought him a car. He's still getting used to his new iPhone.

"I'm behind the times, I'm in uncharted territory," he said.

He thinks often about the friends he left behind in prison, many of whom are similarly awaiting a signature. He wants to help them from the outside, to be their voice and advocate on their behalf, but the enormity of the task can be paralyzing.

Records show there are more than 100 Louisiana inmates who have received favorable decisions from the pardon board under Edwards but have not received his signature.

Advocates argue the commutation cases that make it past the pardon board have been thoroughly vetted by the expert panel, which collects all available data and records showing the inmate's accomplishments and disciplinary history in prison, solicits statements from their victims and uses algorithms to calculate their likelihood of committing another crime once released.

Kerry Myers, deputy director of the Louisiana Parole Project, cites research showing that people "age out" of crime, meaning their likelihood of getting rearrested decreases the older they get and the longer they spend behind bars.

"Punishment has diminishing returns when it ignores rehabilitation and risk — and the only remaining purpose is retribution," he said. "That's where the clemency process comes in."