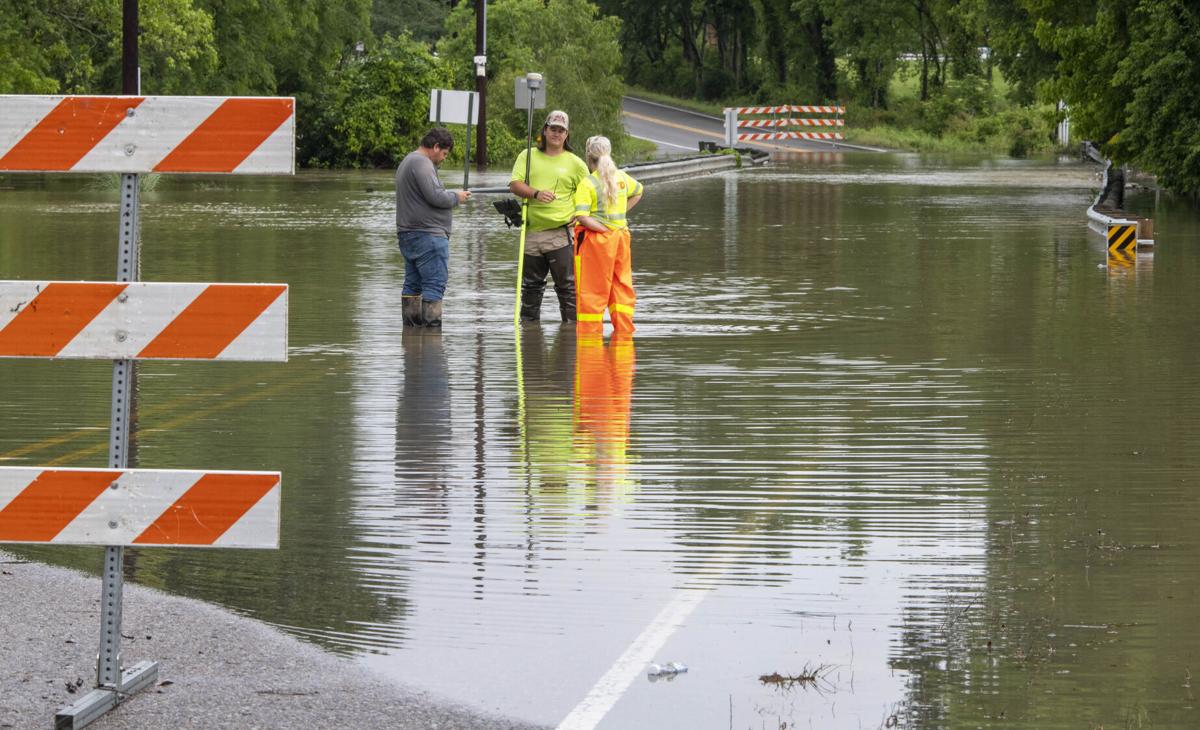 From left, Lance Guillory and Cameron Haney, both with CSRS and shooting elevations, walk through the flooding waters of Bayou Manchac while talking with Missy Gray with DOTD Tuesday May 18, 2021, in Ascension Parish, La. The Old Perkins Road bridge crossing Bayou Manchac is under water. 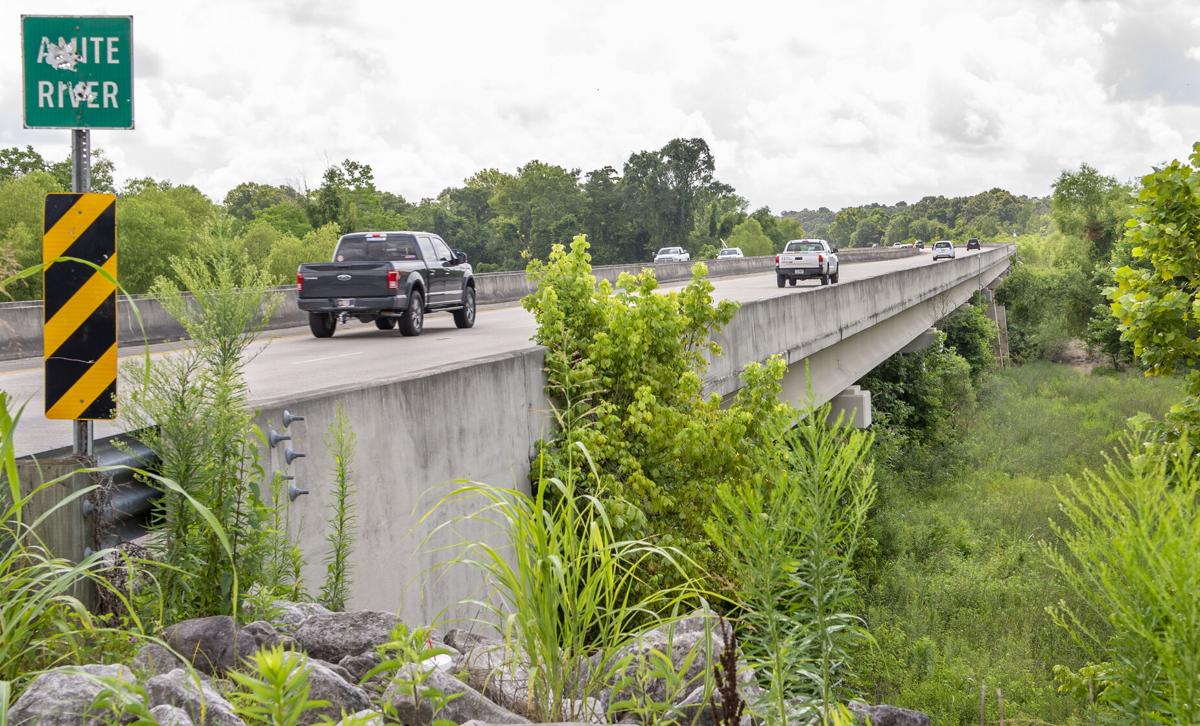 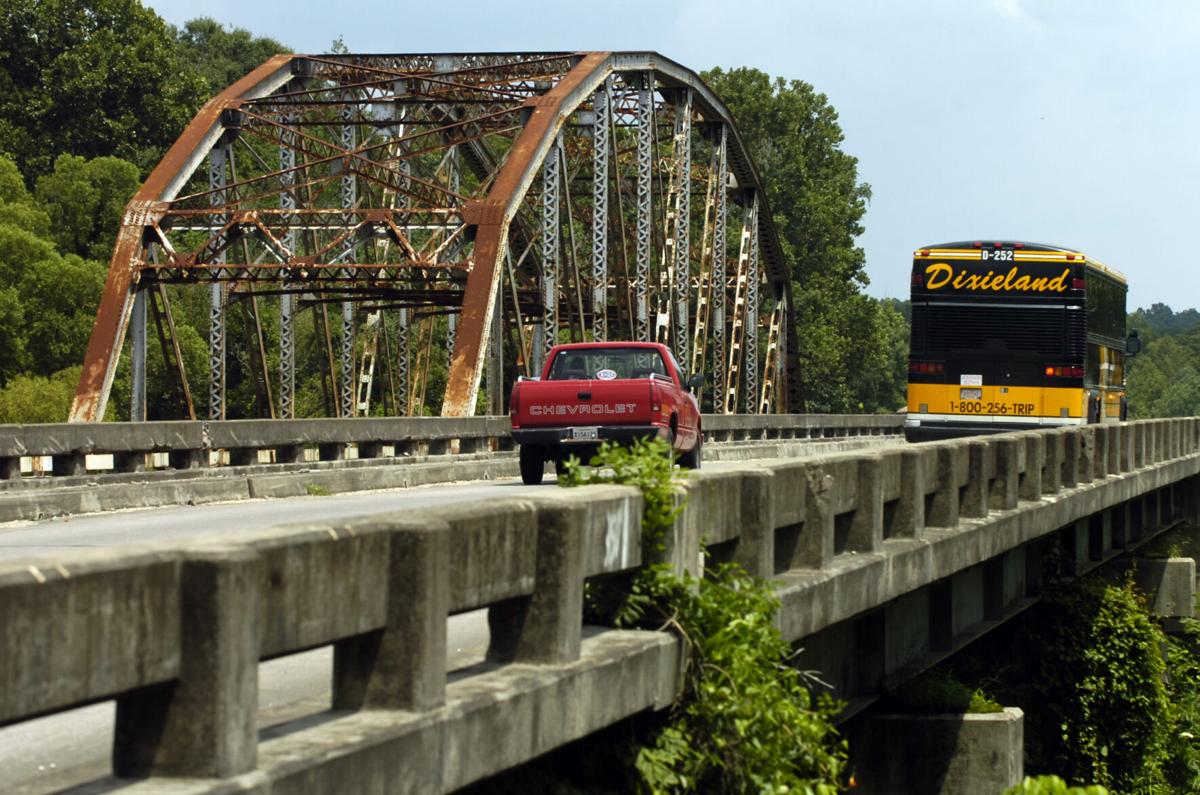 The old Highway 190 bridge spans over the Amite River near Baton Rouge, as seen Aug. 2, 2007. The 77-year-old bridge was blown up on Oct. 21, 2009, and demolished to make way for new wider and higher spans that carry Florida Boulevard from East Baton Rouge Parish to Livingston Parish. 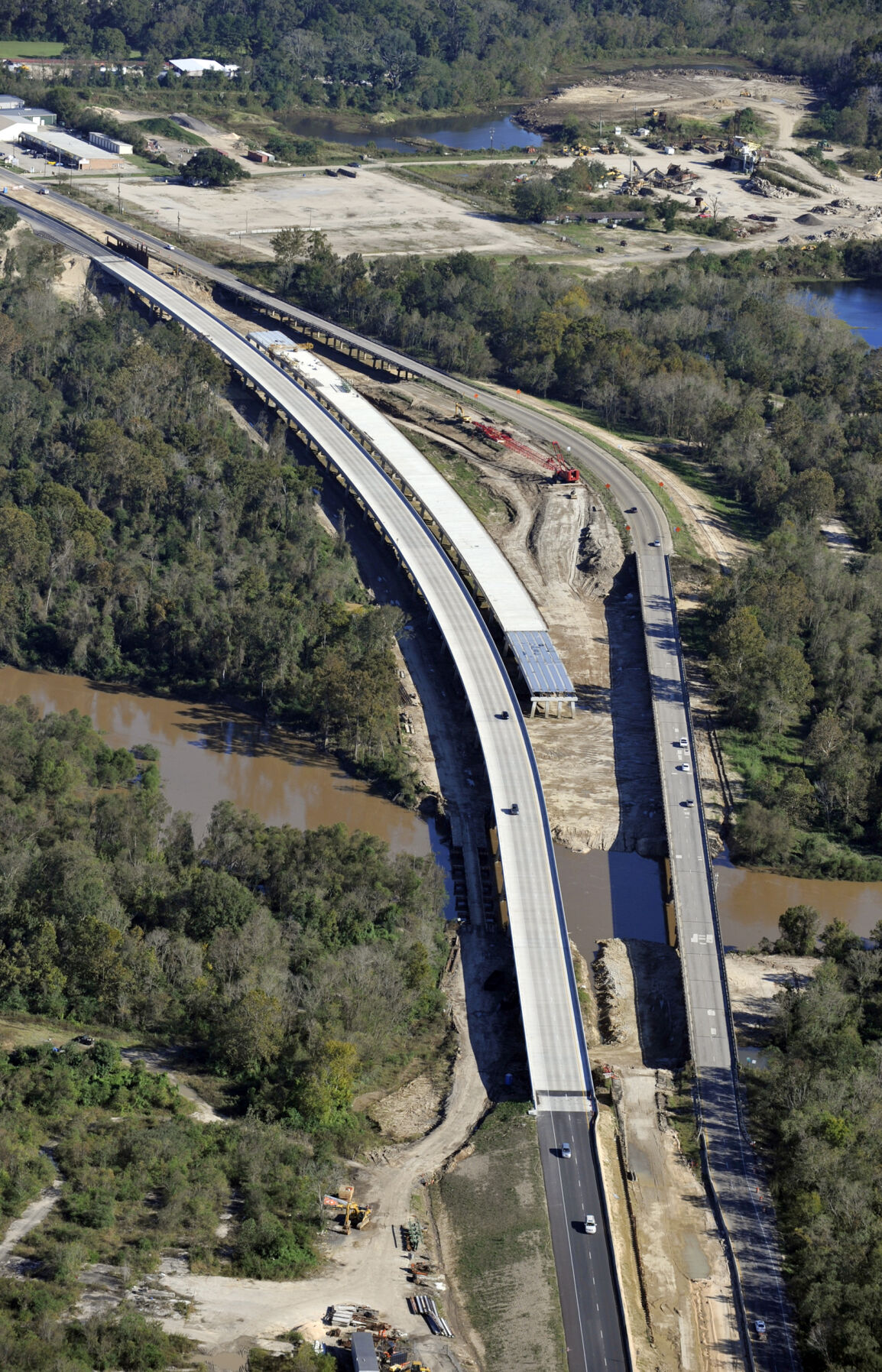 An aerial photograph of the current U.S. 190 bridge spans over the Amite River between Baton Rouge and Denham Springs while they were still under construction on Nov. 1, 2009. The two spans replaced two 77-year-old, lower bridges that had been blown up a few weeks earlier that year and demolished. 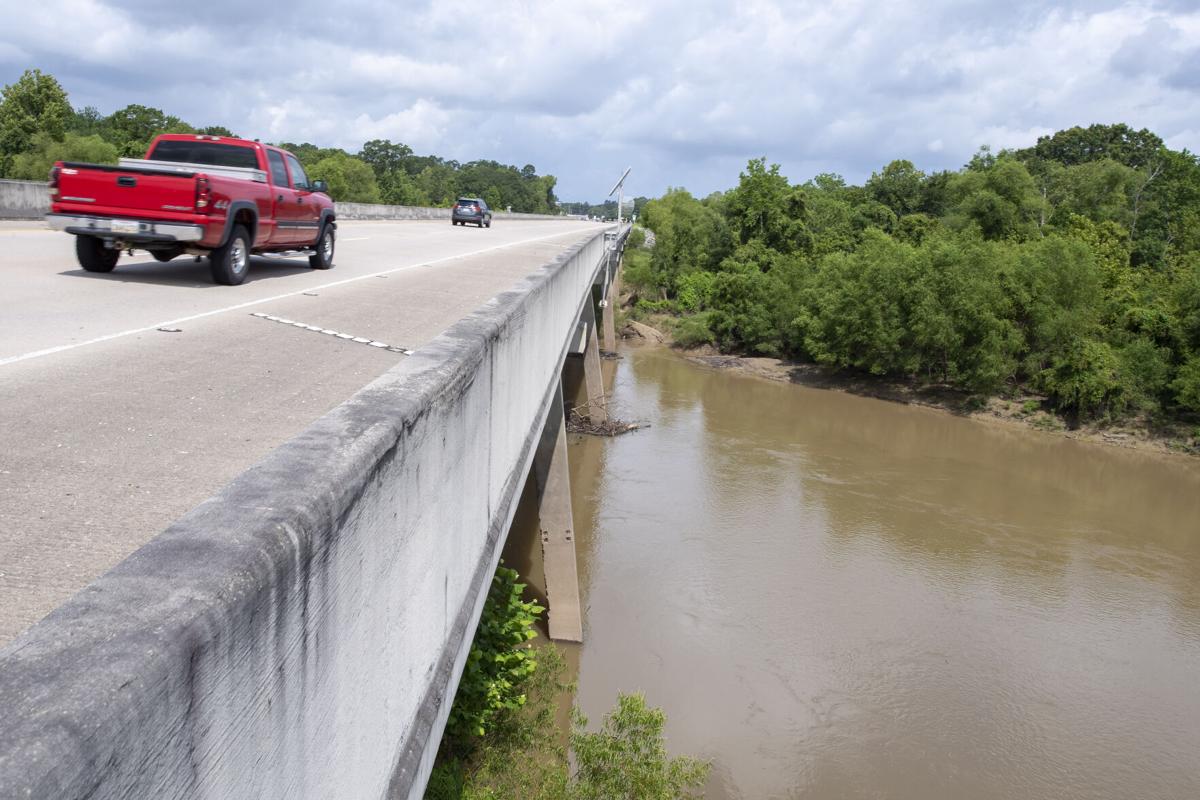 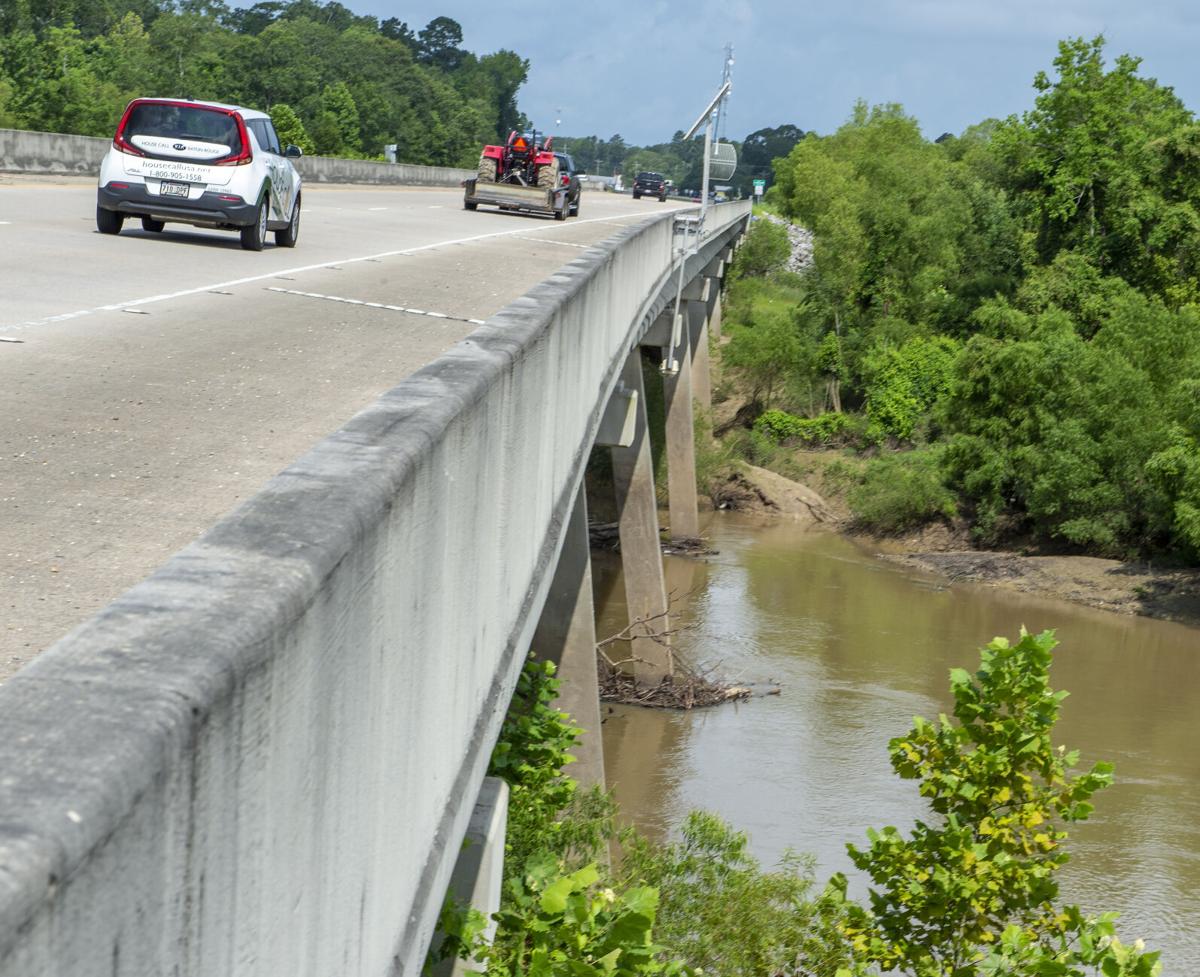 From left, Lance Guillory and Cameron Haney, both with CSRS and shooting elevations, walk through the flooding waters of Bayou Manchac while talking with Missy Gray with DOTD Tuesday May 18, 2021, in Ascension Parish, La. The Old Perkins Road bridge crossing Bayou Manchac is under water.

The old Highway 190 bridge spans over the Amite River near Baton Rouge, as seen Aug. 2, 2007. The 77-year-old bridge was blown up on Oct. 21, 2009, and demolished to make way for new wider and higher spans that carry Florida Boulevard from East Baton Rouge Parish to Livingston Parish.

An aerial photograph of the current U.S. 190 bridge spans over the Amite River between Baton Rouge and Denham Springs while they were still under construction on Nov. 1, 2009. The two spans replaced two 77-year-old, lower bridges that had been blown up a few weeks earlier that year and demolished.

Louisiana will soon begin updating official rainfall probability estimates that influence standards for everything from new bridge and canal construction to new neighborhoods to the flood maps that govern flood insurance rates.

It's possible but not yet certain that heavy rain over the past few years drive those estimates up, which could eventually make things more expensive for taxpayers and homeowners. The update is part of the response to the 2016 floods that inundated the Baton Rouge region.

"In the last 10 years, we've been in a pretty active rainfall pattern, and there've been a lot of extreme events, and you know if I had to predict what would happen, I would think most of the state would probably see an upward trajectory," state Climatologist Barry Keim said.

Still, some experts say it's possible Louisiana will avoid the sharp increases that some places in Texas faced after Hurricane Harvey.

It's not likely leaders in East Baton Rouge Parish will give in to residents' demands for a moratorium on development — at least not any time soon.

For an example of how increased rain estimates can affect the Baton Rouge region, look at the twin U.S. 190 bridges over the Amite River between Baton Rouge and Denham Springs. About a decade ago, the bridges were demolished and rebuilt because of new design standards that, among other factors, changed because of the 1983 flood and other major rain events.

The push comes as some Baton Rouge-area communities, in the face of major rain events and flooding, have called for and even adopted temporary moratoriums on new development to adjust their building rules.

What happened in Texas?

The Federal Emergency Management Agency maps are used for flood insurance rates and also inform local governments' building and planning standards. Among other things, they predict who falls in the most high-risk zones that require flood insurance.

Ataul Hannan, planning division director for the Harris County Flood Control District in the Houston area, compared the importance of federal rainfall estimates with the significance of a foundation to a house.

"And if you move the foundation, it means you have to move everything, OK? So, it's a big component," Hannan said.

Harris County saw certain types of benchmark rainfall estimates rise by nearly 30% to 41%, depending on the location, district figures show.

Because of the size of the rainfall increases, most communities in Harris County, as well as in Austin, have tightened rules in some areas until the maps can be finalized. They are now requiring those in the "500-year" flood plain to follow the rules that previously applied to the higher-risk "100-year" flood plains, like higher elevation requirements and stricter building rules.

'A bridge is coming near you:' Bill Cassidy confident in infrastructure deal after Biden meeting

In Houston, which added extra elevation requirements, builders have avoided land inside the 500-year flood plain due to development costs and are looking to rebuild in the higher urban core, Houston-area builder Mike Dishberger said.

Others are moving to outlying counties that haven't put in as many new rules following the big change in rainfall data.

"They're actually saying, 'We're going to wait and see when the flood plain maps come out what we're going to do then,'" said Dishberger, who is a past president of the Greater Houston Builders Association.

FEMA officials said a change in rainfall estimates doesn't automatically trigger a change in flood maps. But it is one data point the agency or state or local governments can consider to pursue changes.

How much is it going to rain?

In Texas and in Louisiana, the planned revisions affect something known as NOAA Atlas 14.

The federal table of rainfall probability estimates is what allows weather forecasters, scientists, engineers and others to say that a given rain can be classified with familiar terms like a "100- or 500-year" storm.

The table shows what risk an area has of receiving a specific rain total over a set number of minutes, hours, days, weeks or months.

For instance, the intense, heavy rains that sparked flash flooding in the middle of May dropped nearly 14 inches in around six to eight hours in south Baton Rouge and northern Ascension and Iberville parishes, National Weather Service forecasters say. Based on the current Atlas 14 for Baton Rouge, that amount of rain in that amount of time translates into a roughly 500-year to 1,000-year storm, or one that has a 0.2% to 0.1% chance of happening in a given year.

Ascension is hurrying to improve drainage after May floods. Some of the work is controversial

If Louisiana's update did create the kind of shift in NOAA rainfall estimates seen in Texas, the May rain in Baton Rouge would fall into a category with a greater chance of happening, perhaps a 1% or 0.5% chance in any year.

But Louisiana's current probability estimates aren't so old. They were last updated in 2013 and include data through 2010.

Emad Habib, director of the University of Louisiana at Lafayette's Louisiana Watershed Flood Center, said officials realized that, by the time the models would be finished and they would be ready to start designing projects in 2023, they would be short more than a decade of storm data and missing information from a period with plenty of extreme events, including the 2016 floods.

"And that's why the need or the thought came about that, 'OK, maybe we should update the (NOAA) Atlas,'" he said.

While the question of human-induced climate change hangs over the outcome of this analysis and how projects should be built to account for it, NOAA doesn't use modeling or other projections to make its rainfall probability estimates. It zeroes in on past extreme events for its statistical analysis, officials said.

"This is strictly on actual observation of any storm event that ever occurred in the history of recorded meteorological information," said Mark Glaudemans, geo-intelligence division director for the National Weather Service's Office of Water Prediction.

Figures are also regionalized, so one state's estimates can incorporate rainfall data from the outer fringes of neighboring states, like Texas or Mississippi in Louisiana's case.

But Keim, the state climatologist, noted that the intense rains that sparked the May 2021 and the August 2016 floods are ones that could be expected under a changing climate with more moisture in the atmosphere, warmer oceans and shifting weather patterns.

Those rains, in particular the ones that caused the '16 flood, are likely to play an important role in the NOAA revisions for the quarter of the state that the storm affected, including the hard-hit Baton Rouge and Lafayette areas, Keim said.

Melissa Kennedy, a project engineer at HNTB, a drainage and storm water consulting firm for East Baton Rouge and Ascension parish governments, said her firm has rainfall models that do try to project for climate change.

They estimated that NOAA's current rainfall probability figure for the Baton Rouge area for a 100-year storm over a 24-hour period is low but by probably only a little less than an inch of rain.

"It clearly is not as significant as Houston," Kennedy said in an email.

Houston's 100-year rain estimate went up nearly 5 inches, or 33%. A benchmark standard, a 100-year storm has a 1% chance of happening in a given year.

Habib, the UL professor who sits on a team of technical experts advising the Louisiana Watershed Initiative, declined to speculate on what kind of changes the revision will produce, noting that Louisiana has different climatic zones that could see different outcomes.

"We just need to wait until the analysis is done and see how the changes are reflected in the different areas," Habib said.

Baton Rouge has had 4 feet of rain so far this year; how close to a record are we?