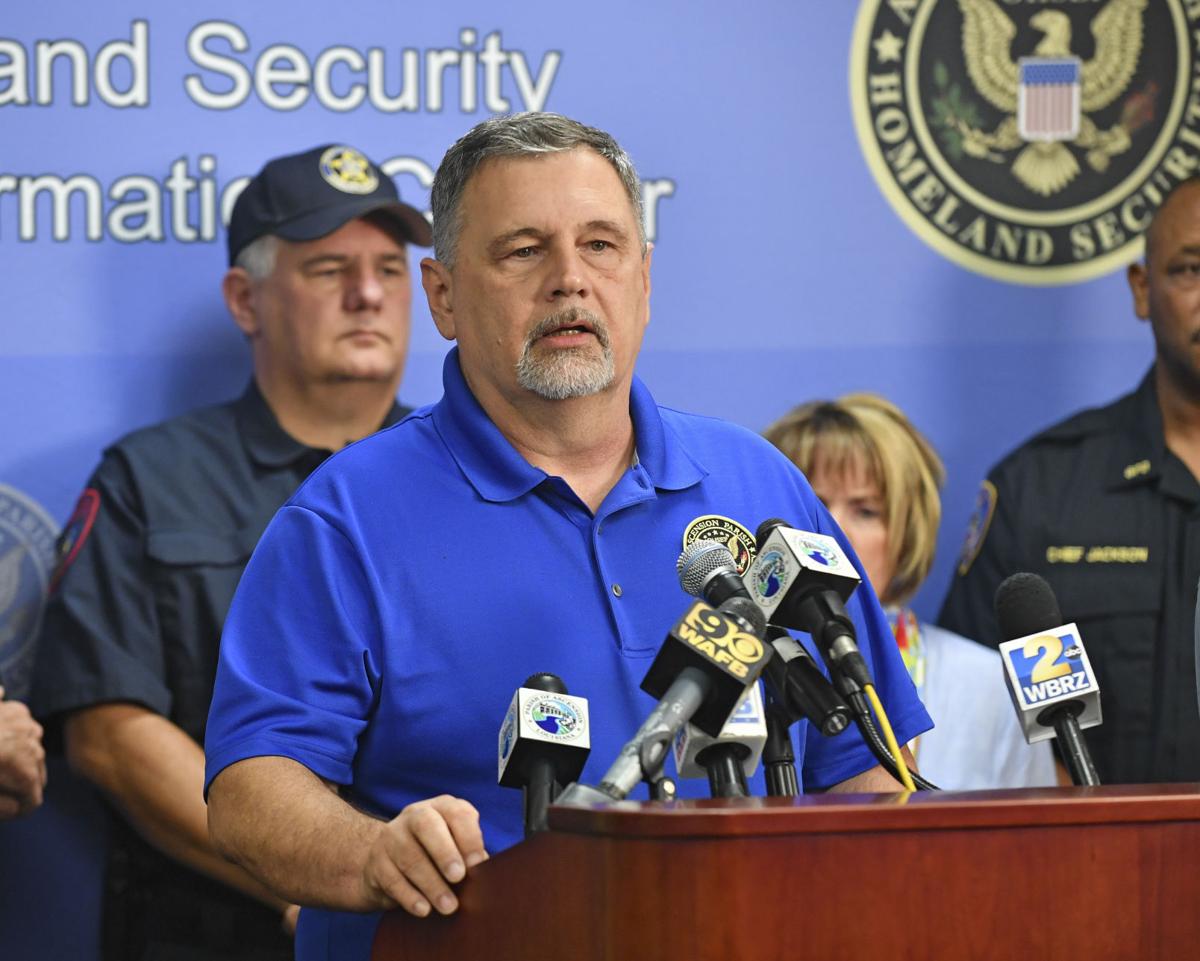 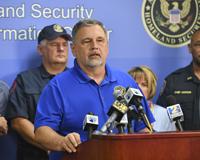 Rick Webre, director of the Ascension office of homeland security and emergency preparedness, speaks during a briefing after Tropical Storm Barry was upgraded to a Category 1 hurricane on Saturday, July 13, 2019, at the Ascension Parish Courthouse Annex in Gonzales, La. Behind him, in the cap, is his brother, interim Sheriff Bobby Webre. 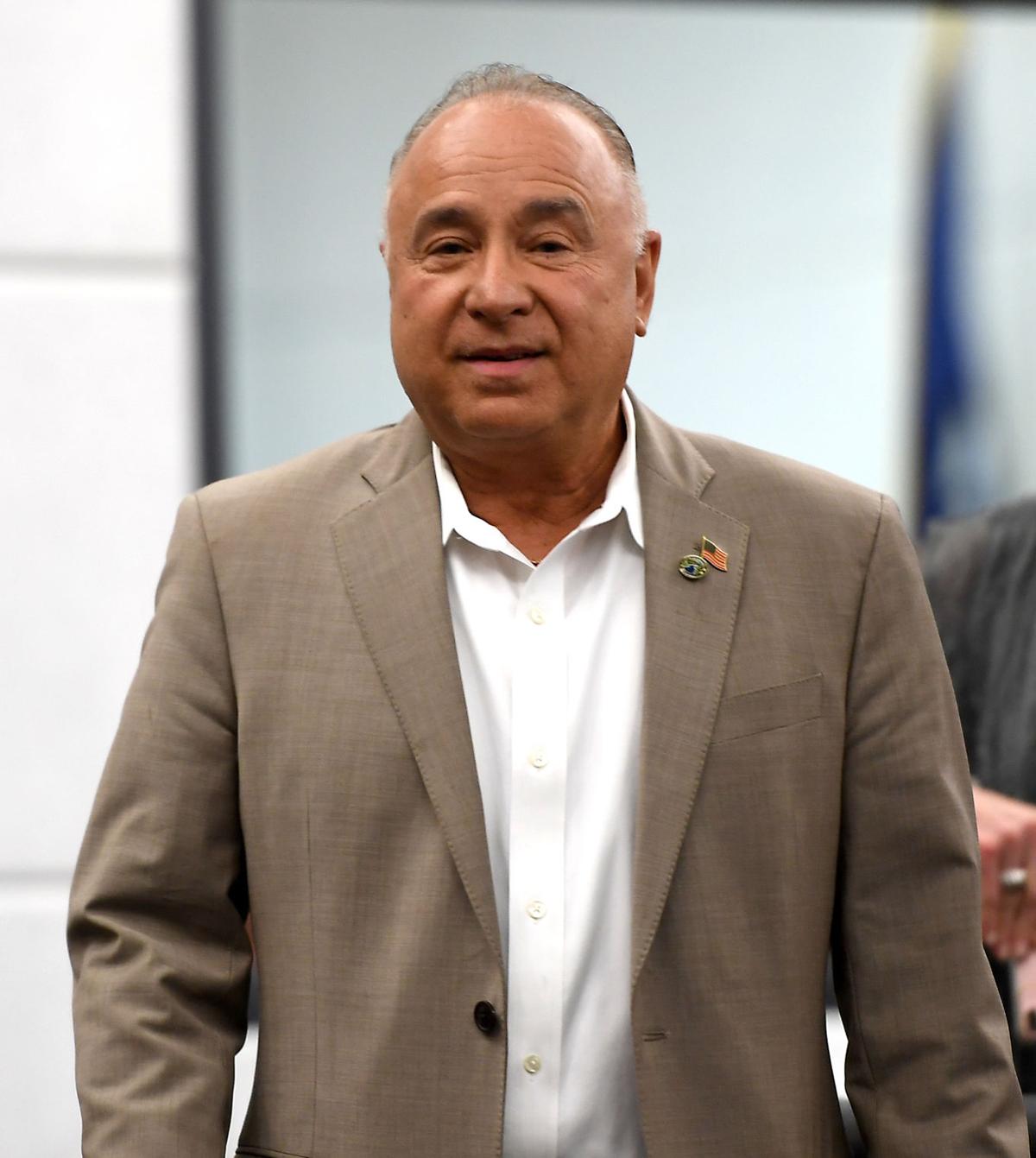 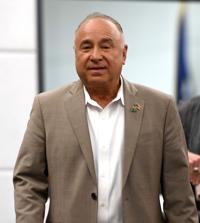 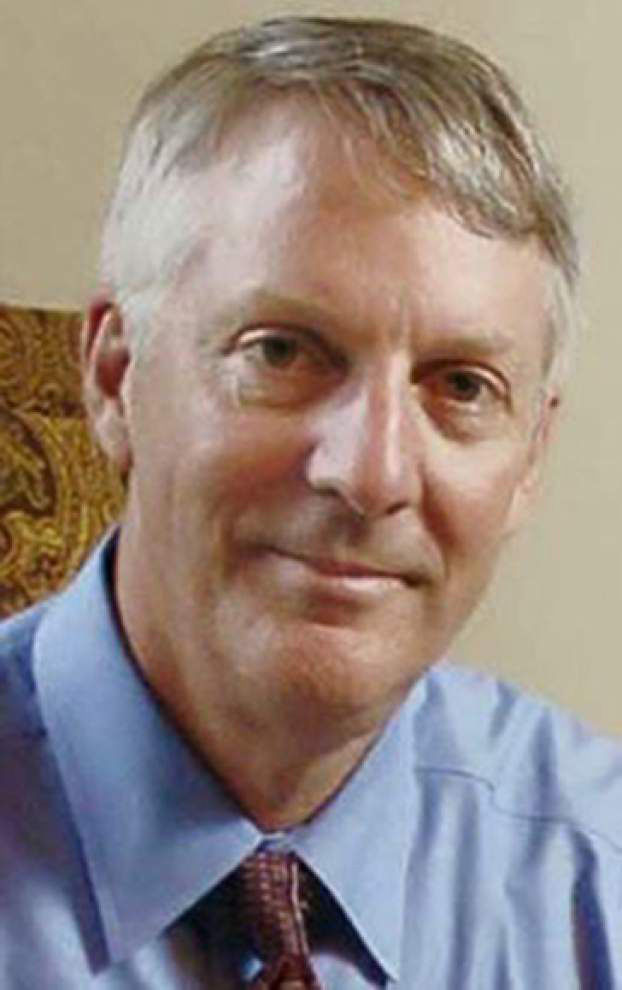 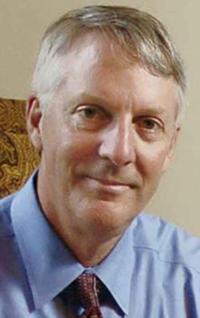 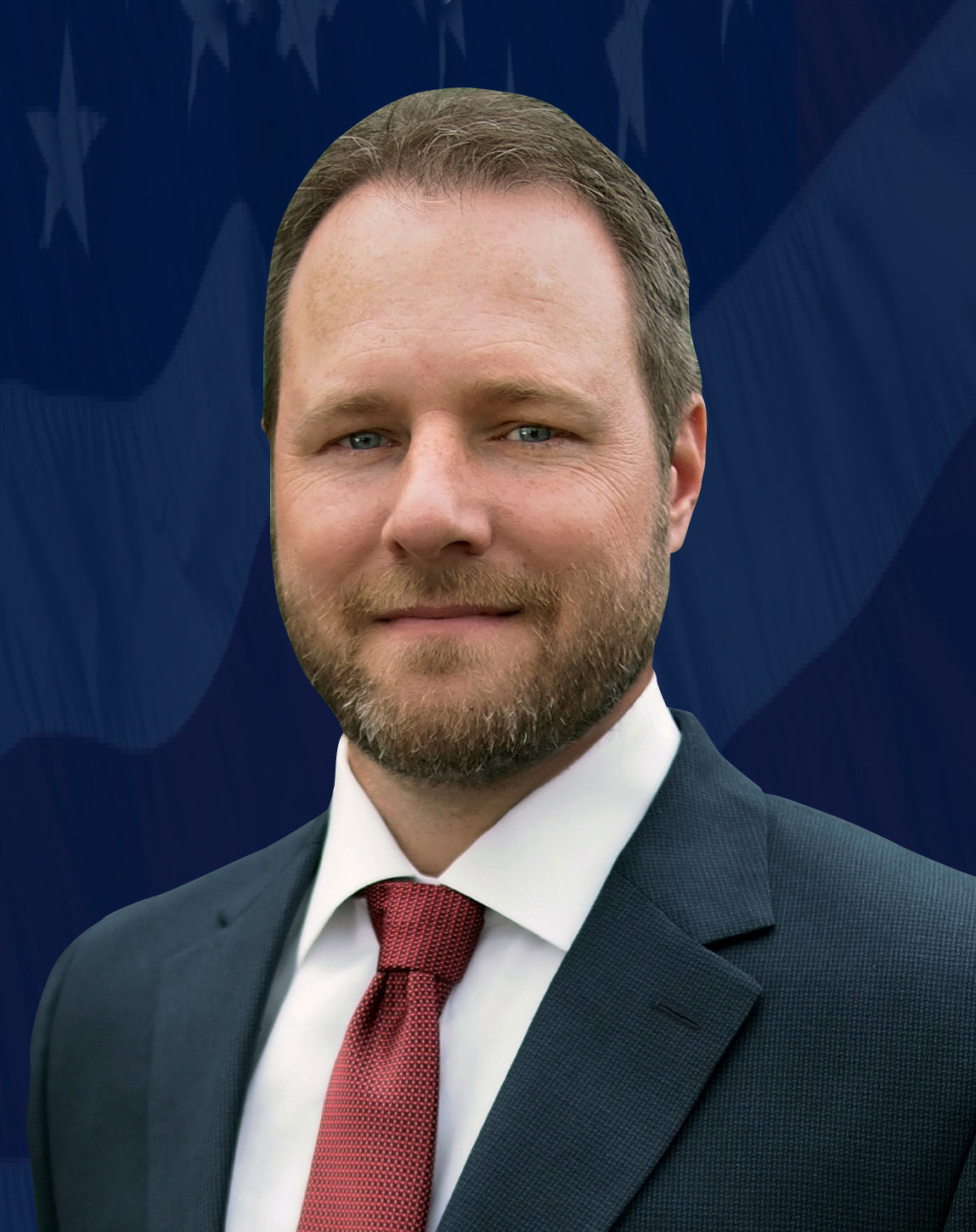 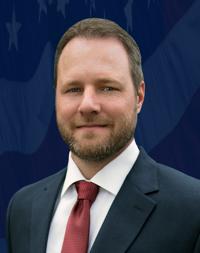 Rick Webre, director of the Ascension office of homeland security and emergency preparedness, speaks during a briefing after Tropical Storm Barry was upgraded to a Category 1 hurricane on Saturday, July 13, 2019, at the Ascension Parish Courthouse Annex in Gonzales, La. Behind him, in the cap, is his brother, interim Sheriff Bobby Webre.

Longtime Ascension Parish homeland security director Rick Webre, the brother of interim Sheriff Bobby Webre, has resigned from his office and entered a wide-open field for parish president as the incumbent, embattled Parish President Kenny Matassa, will not seek reelection.

Should Rick Webre and Bobby Webre both win their elections this fall, Ascension would have two brothers holding the two top executive government positions in Louisiana's fastest-growing parish. They both are Republicans.

In a Facebook video, Rick Webre said Thursday he could no longer support Matassa or anyone he supports in the Oct. 12 election.

Rick Webre's last-day entrance into the race comes just weeks after revelations that Matassa left Ascension for a parish-funded trip to a conference in Las Vegas as Hurricane Barry formed off the Louisiana coast.

While Matassa has said he stayed in contact with his staff during the storm, it was Rick Webre, as homeland security chief, who remained at the center of the parish's response along with other parish officials, including his brother, Bobby Webre, and was a familiar face delivering the latest news to television and social media audiences.

Rick Webre's surprise entry apparently caught many of the parish's political establishment off guard, including the interim sheriff himself. Sheriff Bobby Webre said in a statement that he first learned his brother, Rick, was running for parish president on Thursday morning.

"I immediately met with him and let him know that I do not support his decision to run," Bobby Webre said. "I want to reiterate my statement from earlier this year: I am running in my own race on my own merits. I will not support or endorse any other candidate in any other race, including my brother."

With the entrance Thursday also of Ricky Diggs, a retired school teacher who has worked in industry and ran for parish president in the 2015 primary, Ascension voters will have at least a four-person presidential field to choose from Oct. 12.

Rick Webre and Diggs are joining Murphy Painter, a former Ascension sheriff's chief deputy and former state Alcohol and Tobacco Control commissioner, and Clint Cointment, a Gonzales surveyor who narrowly lost to Matassa four years ago. They qualified Tuesday and have been campaigning and raising money for months.

Diggs is a Democrat. Rick Webre, Cointment and Painter are Republicans.

While the fields for sheriff and parish president are crowded, other top parishwide officials eased into new four-year terms with no opposition: Clerk of Court Bridget Hanna, Assessor M. J. "Mert" Smiley Jr. and Coroner John Fraiche, who won his 10th term. All are Republicans.

Rick Webre hadn't even registered his campaign committee with the state Board of Ethics as of Thursday morning. He appears to have created his Facebook campaign page Thursday morning also, in which he has the tag line, "Performance not politics."

Rick Webre didn't return message left with the parish homeland security office and on his personal cell Thursday. His wife took a message at another number displayed on his campaign Facebook page, but he hadn't returned the messages. In a Facebook video, he said that seeking political office was "never one of my professional goals."

"But due to the current environment in the parish president's office, I felt compelled to resign my position as the Ascension Parish Office of Homeland Security director. I can no longer support the current parish president," Webre said in the video. "Nor can I support anyone that he endorses or supports for that position."

"And, over the past 13 years, the only way that I've found to incorporate change in parish government or the administration was to do it personally," he said.

He added it was an absolute privilege to work and serve with parish employees over all those years.

"I want to continue this service. That's why I'm asking for the confidence of your vote to be your next parish president," he said.

Webre didn't say specifically what issues inside the parish president's office compelled him to run.

Webre's entrance into the parish president's race comes just months after six-term Sheriff Jeff Wiley, who hadn't faced an election opponent since 1999, stepped down in January. His daughter, Erin Wiley Lanoux, had won an election the prior fall to be Parish Court judge, and Wiley retired to avoid possible conflicts of interest.

If elected this fall, Bobby Webre, as sheriff, and Rick Webre, as parish president, wouldn't seem to face the same kinds of direct conflicts a sheriff and a judge might have in the law enforcement arena, where the leader of an arresting agency and the person potentially ruling on some of those arrests were in the same family.

Parish government and the Sheriff's Office have generally separate revenues, budgets and areas of responsibility, but the dual candidacies at least present the risk that voters could penalize both men over fears that too much power would reside in one immediate family.

Other local officials said they, like Bobby Webre, were surprised, both because they had no advance notice and because they hadn't seen an inclination from Rick Webre to enter the political arena during his years of operating what they say has been a well-run homeland security office.

Casso, the Parish Council chairwoman, said she received a text from someone Thursday morning referencing idle talk from the past that Rick Webre would be a good parish president and said she didn't understand initially what the context of that text seemed to be.

She said she understood once a reporter informed her Rick Webre had qualified for the race.

Former Parish President Tommy Martinez, who served four terms, both benefited from and was on the losing end of tight past presidential elections with three strong candidates. He said how the votes will shake out in this race, with Rick Webre now running, might mean a very close race in the primary parish president.

"It's a game-changer," Martinez said.

In the months leading up to qualifying, speculation was rife that Matassa would not seek reelection as other candidates kicked off their campaigns. Matassa also has not publicly announced any endorsements in the race but was present for Painter's campaign announcement in late April.

In addition the Las Vegas flap, Matassa's first term as parish president has been marked by a bribery indictment, for which he was acquitted but suffered a symbolic no confidence vote, and disputes over management of growth and government operations.

Still, during his term in office, Matassa, pushed by a strong Parish Council majority and sometimes despite his preferences or with the prodding of his critics, presided as the parish adopted long-sought road impact fees, new tougher policies on assessing the traffic impacts of new developments and a top-down review of the parish's organizational structure.

His administration also started a contract ditch-clearing program that ended a two-year backlog on the work and oversaw strong government finances fueled by the parish's growth, which made it the fastest growing parish in the state between mid-2017 and mid-2018.

Even as Matassa's time is winding down, the Parish Council is poised to consider negotiations for a regional parish sewer system that successive administrations have failed to make happen and has a more than $60 million road program known as Move Ascension that is close to starting road construction probably late this year or early next year on a series of projects to improve safety on narrow roads and ease congestion.

Before becoming parish president in early 2016, Matassa had worked as a parish administrator and multi-term Gonzales city councilman.