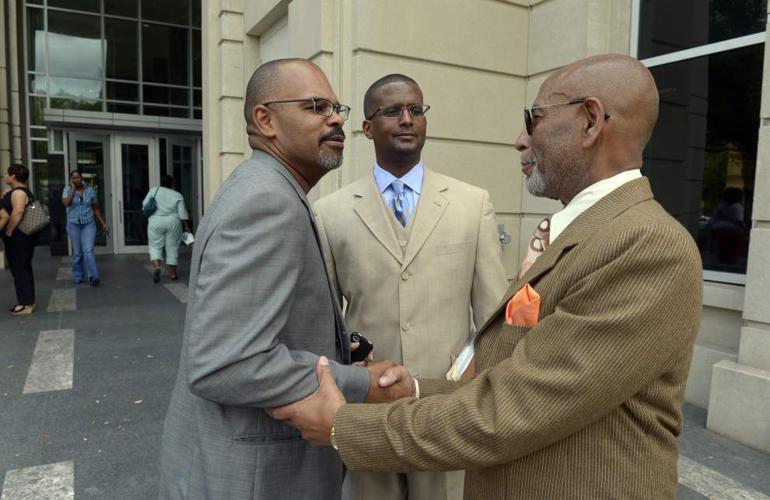 Advocate staff photo by RICHARD ALAN HANNON — Mike McClanahan, left, president of the Baton Rouge branch of the NAACP, meets state Sen. Elbert Guillory, R-Opelousas, right, and Edmond Jordan, prior to the start of a press conference in front of the 19th JDC announcing a wrongful death lawsuit by Guillory against the Baton Rouge Police Department and the city in May 2014. Guillary and co-council Jordan are representing the family of Dontronner Robinson, 32, of Baton Rouge, who died in 2013 after ingesting crack cocaine during a SWAT raid. 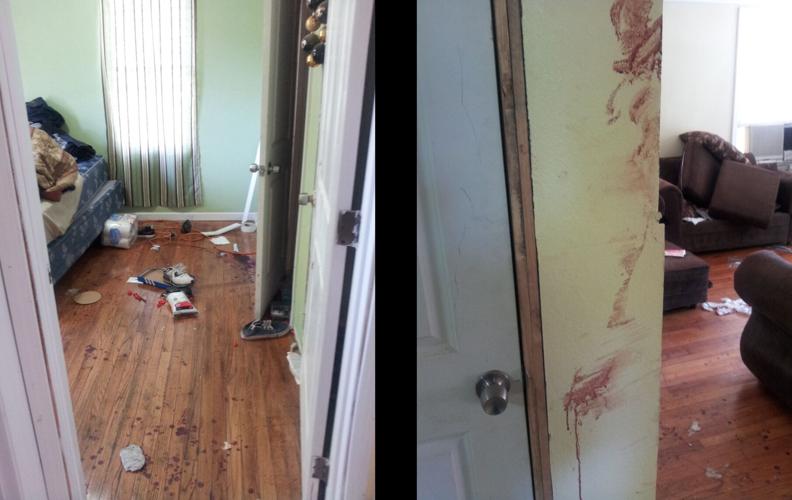 A pool of blood is visible in the bedroom and more smeared on the walls after Dontrunner Robinson engaged in a violent struggle with Baton Rouge police officers in May 2013. He later died from choking on a bag of crack cocaine, an autopsy report says.

Among many allegations he dropped just before resigning from the Baton Rouge Police Department, Jeremiah Ardoin accused some longtime narcotics detectives of joking about the 2013 death of an unarmed Black man after a violent struggle with officers.

The incident — which the detectives dubbed the "Flag Street Massacre" — became an inside joke, according to Ardoin, an ex-cop with no firsthand knowledge of what happened that evening on Flag Street. His claims about widespread misconduct within the narcotics unit, however, prompted a corruption probe that remains ongoing.

Authorities said Dontrunner Robinson died from choking on a bag of crack cocaine, which he ate right before the confrontation with police. His wife later filed a wrongful death lawsuit claiming officers beat Robinson so viciously he was unable to completely swallow the bag, which lodged in his throat.

Photos from the scene show blood pooled on the floor and smeared on the walls throughout his house. An autopsy report notes cuts and bruising to his face.

The lawsuit remains unresolved, but the recent statements from Ardoin and the ongoing corruption inquiry raise new questions about the case, which critics consider indicative of a larger cultural problem inside the narcotics division.

Soon after being arrested in December for buying stolen property, Ardoin penned two memos accusing his colleagues of even worse misconduct. He shared both with the police chief.

In the second missive, Ardoin pointed a finger at Sgt. Samuel "Drew" White, one of four high-ranking narcotics detectives reassigned to street patrols earlier this year.

"I got tired of hearing them laughing and joking about how Drew White killed Dontrunner Robinson, an unarmed black man, by beating him to death with his hands and pistol, which they called the Flag St. Massacre," Ardoin wrote in the memo.

White was cleared of wrongdoing after an internal investigation into the Flag Street incident back in 2013 — years before Ardoin joined the narcotics division. Ardoin also clarified in an interview this week that he was not accusing White of killing Robinson, simply highlighting what he thought were inappropriate jokes about the incident.

"Once again, Jeremiah Ardoin is speaking on stuff he has absolutely no knowledge about," said Kyle Kershaw, a BRPD union attorney representing White. "Clearly he just wants to bring others down with him — people who still have their jobs with the police department."

Recent attempts to reach White were unsuccessful because BRPD officers are largely forbidden from commenting in the media.

Ardoin was the only Black officer in the 12-person narcotics division before his arrest and resignation. He claims his supervisors would target Black communities across Baton Rouge, searching people without probable cause, executing petty arrests and planting drugs on suspects.

Baton Rouge Police Chief Murphy Paul said his department is investigating everything in the memos, including the Flag Street incident. Some of the other claims have already resulted in pending criminal charges against Jason Acree, another disgraced former detective accused of stealing drugs from the evidence room, among other missteps.

The fatal Flag Street encounter occurred May 2, 2013. BRPD narcotics officers had a no-knock search warrant for the house, where detectives had reason to believe a man known as "Tron" was selling drugs, according to police reports. White was among the officers who showed up to serve the warrant.

In a written report describing what happened, White said he and another officer entered the house and discovered a locked bedroom door. The other officer stepped aside while White tried to kick down the door, finding he was met with resistance from someone inside, later identified as Robinson, the report says.

Finally, Robinson released the door and tried to run past detectives and escape the room. "Det. White was still facing backwards and swung a right elbow, striking Dontrunner in the face," the officer wrote. He said the strike knocked Robinson back into the room and allowed detectives to enter.

In an interview during the resulting death investigation, White told deputies he was holding an AR-15 rifle when Robinson charged him, police reports show. White said he struck Robinson near his shoulder to get him away.

"Det. White then pushed Dontrunner to the ground, as he was flailing around violently," White wrote in his report, which describes an ensuing struggle that ended with Robinson in handcuffs.

White initially was trying to keep Robinson on the ground while other officers searched a nearby closet, first by stepping on his back. Those efforts "were unsuccessful due to the violent rolling around and jerking motions of Dontrunner," White wrote in the report. The officer then used his knee to restrain Robinson and handed off his rifle to another cop, the report says.

Police reports show White had fought with Robinson before, using violence to gain compliance during an arrest several months earlier. In August 2012, White spotted Robinson with marijuana and ended up chasing him, then punching him repeatedly in the face because Robinson was swinging his fists and violently resisting arrest, White wrote in a report.

By the time Robinson was handcuffed in the Flag Street incident, he was bleeding from the forehead and still refused to stop moving around, White said. The officers brought Robinson into the living room while White returned to the bedroom to search for potential hidden contraband. When he finished searching, White discovered that "Dontrunner had been moved outside, and was being brought back inside, unresponsive," according to the report.

White said officers quickly started performing CPR, which caused Robinson to start breathing again; then medics arrived and took over. They tried to intubate him, but found blockage in his throat, according to another police report. Medics then used a suction tool, which caused a piece of suspected crack cocaine to become lodged in the intubation tube, police said.

Robinson was pronounced dead at the hospital.

An autopsy report deemed his death accidental, the result of asphyxia "due to swallowing of translucent bag."

The report, signed by a forensic pathologist with the East Baton Rouge Office of the Coroner, also notes several bruises and other injuries, including scrapes around his eyes and nose. Photos from the autopsy investigation show blood caked across his face, with a deep cut above one eye.

Ardoin, the author of the memos, said he saw Robinson while working extra duty at the hospital that night and described him as "severely beaten" — bruised and bloodied with his eyes swollen shut and a busted lip, bleeding from the nose. Ardoin made those comments during a recent radio interview with Baton Rouge NAACP President Eugene Collins.

Robinson died from the bag of cocaine blocking his airway, the pathologist found. A drug screen showed THC, cocaine and opiates in his system, though the drugs were not considered a factor in his death. Neither were the facial injuries.

In addition to his medical records, the report cites a statement from his wife, Alaysha Alexander. A police report says she recounted watching her husband place an unknown amount of crack in his mouth just moments before officers kicked down the bedroom door.

'An execution of the worst sort'

In an interview Friday, Alexander denied telling police she saw Robinson swallow the drugs, but acknowledged the possibility he ingested them.

She was also inside the bedroom when police kicked down the door. She called the scene that followed horrific: officers beating and kicking her husband, hitting him with a long gun while she yelled for them to stop.

After she and Robinson had been handcuffed and moved to the living room, she noticed him struggling to breathe — "flailing around like a fish out of water" — and pleaded with officers to help him, she said. When officers later separated them, she heard Robinson desperately yelling for his mom.

Alexander also referenced photos from the scene showing a pool of blood in the bedroom and more smeared on the walls and dripped across the wood floors where officers dragged Robinson through the house after the beating.

"Police should not be executioners," she said. "But for all this time, it was just my word against theirs."

Surveillance cameras in the house likely captured the incident, but police seized the footage, Alexander said. Several years would pass before BRPD equipped its officers with body cameras.

Alexander filed a wrongful death lawsuit in 2014 against Baton Rouge and its police department, seeking damages for herself and her son. Her attorneys — Elbert Guillory and Edmond Jordan — hosted a press conference outside the 19th Judicial District courthouse in downtown Baton Rouge to announce the suit.

Attorneys for the city recently filed a motion for dismissal because of inaction from Guillory. The request is still pending, leaving the future of the lawsuit unclear. Alexander also said Guillory has been inattentive for years.

Guillory, however, said the case is delayed, not stalled. He feels optimistic a resolution will come in the near future, especially given the backdrop of recent misconduct claims against White and other narcotics detectives. He said Robinson suffered "an execution of the worst sort" and his family deserves justice.

For her part, Alexander said she found new attorneys and hopes to either revive the existing case or file another lawsuit. The family could still sue on behalf of a different surviving child because the statute of limitations includes an exemption for minors.

"Once again, members of the BRPD narcotics unit have been exposed," attorneys Ron Haley, Dedrick Moore and Baron Roberson said in a statement Friday, claiming officers inflicted "a bloodbath of pain and terror against Mr. Robinson."

Meanwhile, leaders of the Baton Rouge NAACP are calling for a grand jury to review all evidence from the case and consider bringing criminal charges against the officers involved. East Baton Rouge District Attorney Hillar Moore III said prosecutors will review whatever evidence is provided.

"This situation has been overlooked since 2013," said Collins, the Baton Rouge NAACP president. "We want justice."

In the months leading up to a corruption probe into the Baton Rouge Police Department narcotics division, seven of its detectives later accuse…