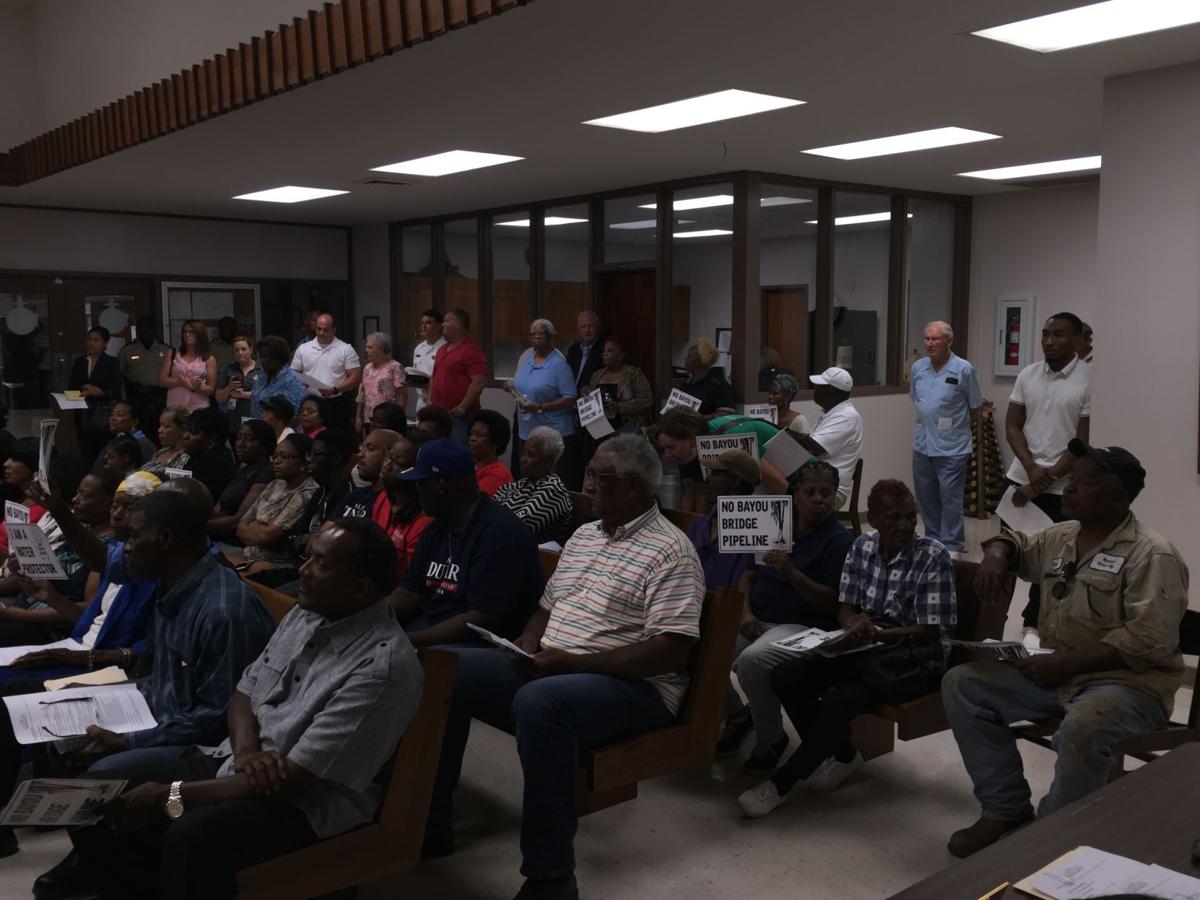 Advocate staff photo by David J. Mitchell -- Residents and environmentalists show their displeasure with the Bayou Bridge pipeline Wednesday, Aug. 23, 2017, inside the St. James Parish Council chambers in Vacherie. The Parish Council later narrowly voted to uphold a prior land use approval that allows the last leg of the 162-mile crude oil pipeline to pass through the parish to tank farms near the Mississippi River in western St. James. 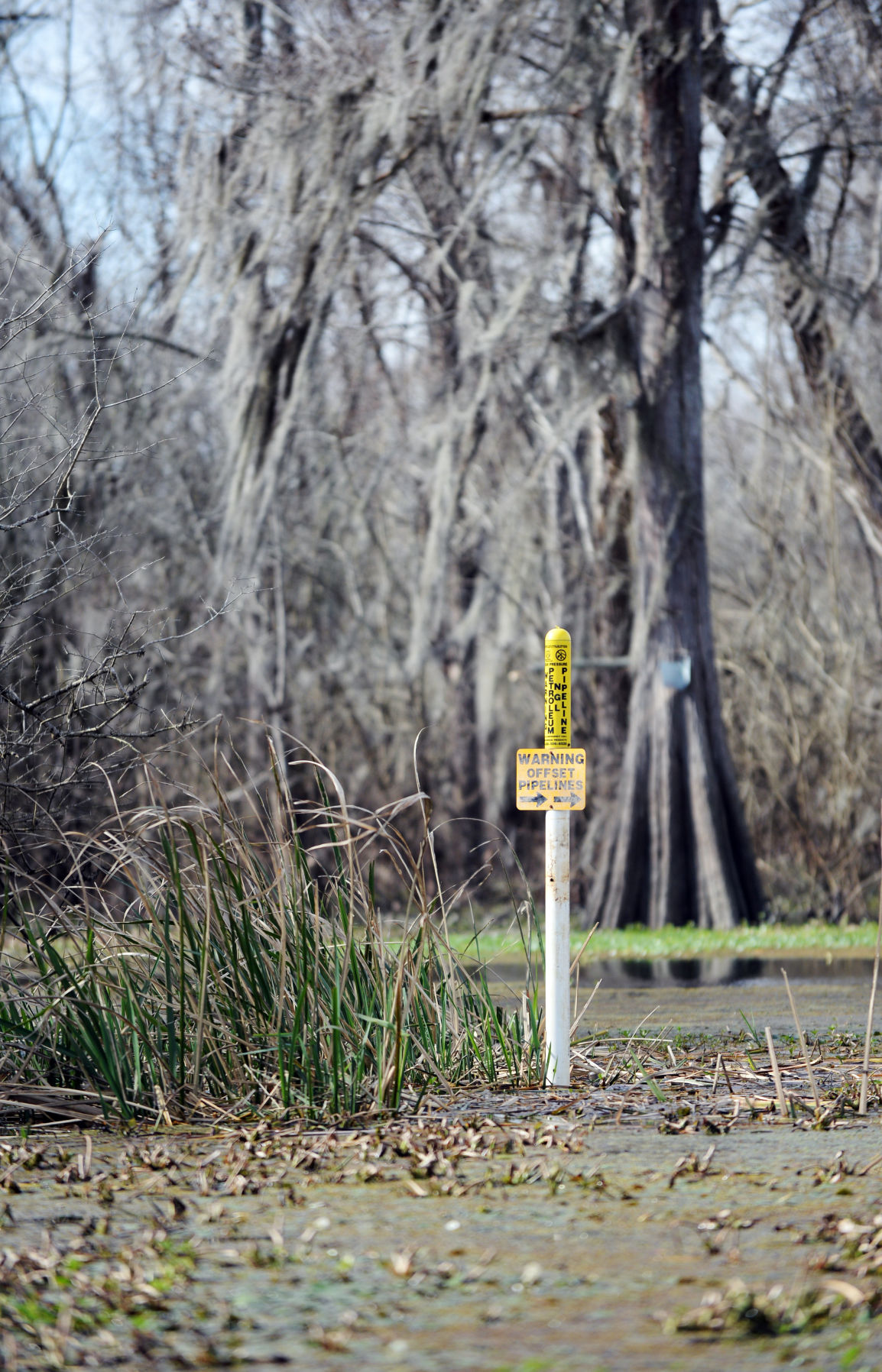 A pipeline marker stands along the spoil banks of an existing-pipeline canal, the same corridor that would be used for the proposed Bayou Bridge Pipeline, Thursday, January 26, 2017, in the Atchafalaya Basin. 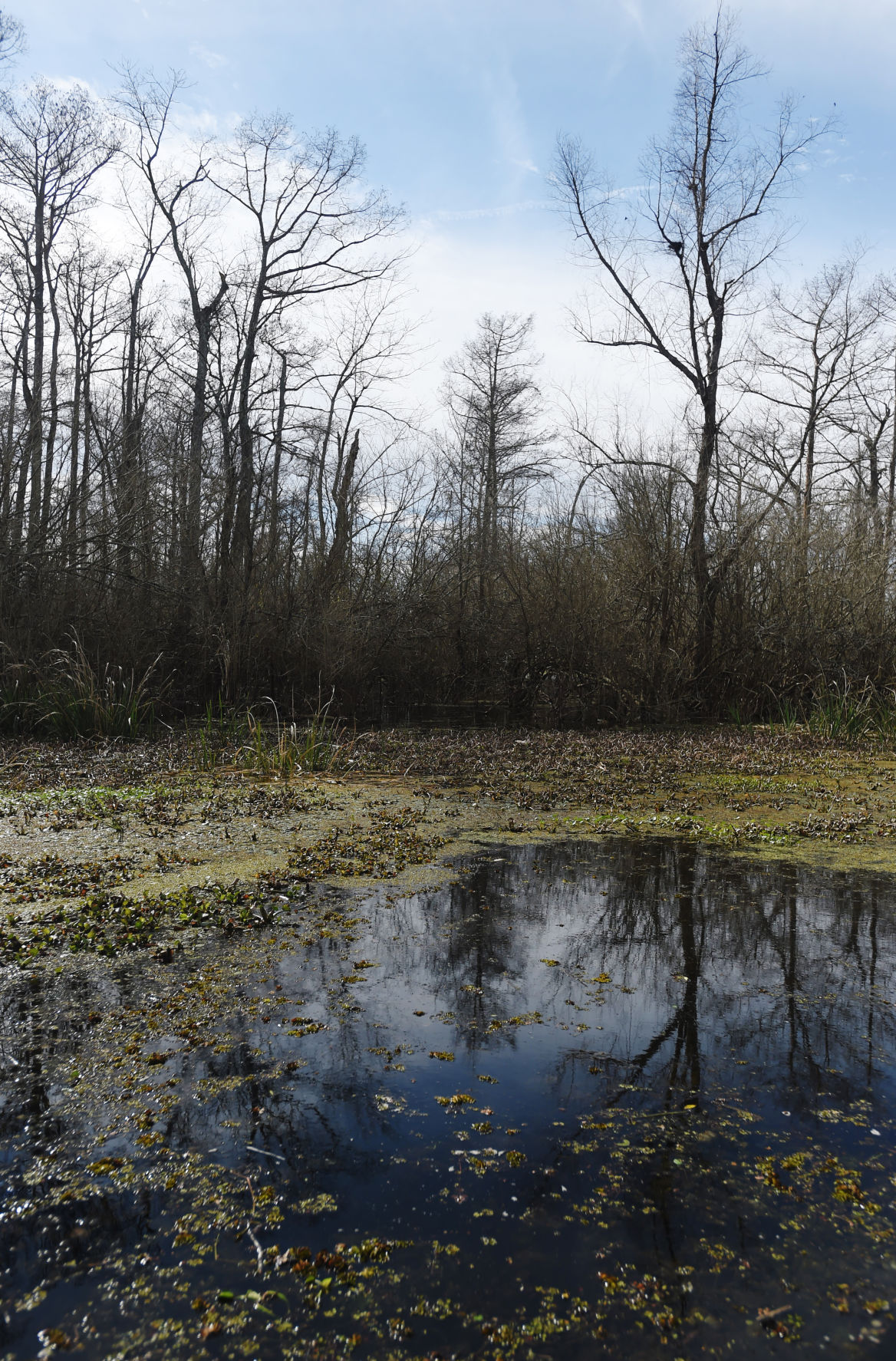 Trees and brush grow along the side of an existing-pipeline canal, the same corridor that would be used for the proposed Bayou Bridge Pipeline, Thursday, January 26, 2017, in the Atchafalaya Basin. 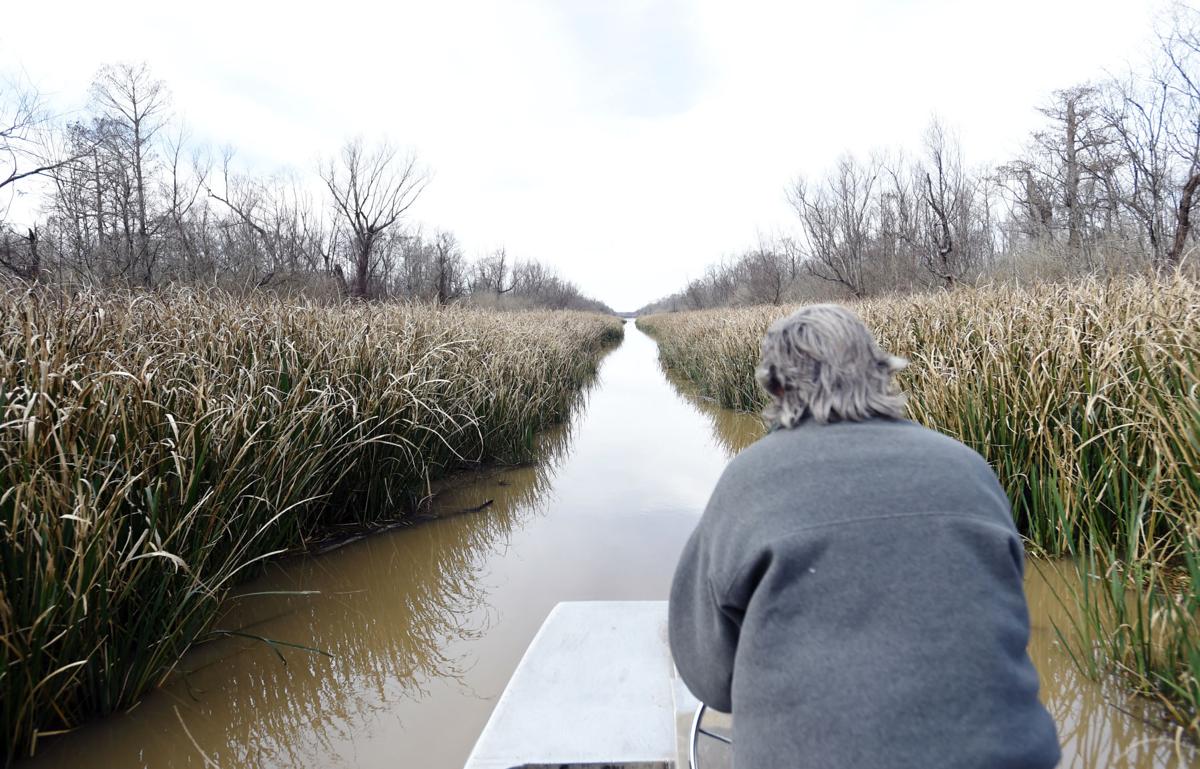 Atchafalaya Basinkeeper Dean Wilson steers a boat through an existing-pipline canal, the same corridor that would be used for the proposed Bayou Bridge Pipeline, Thursday, January 26, 2017, in the Atchafalaya Basin. 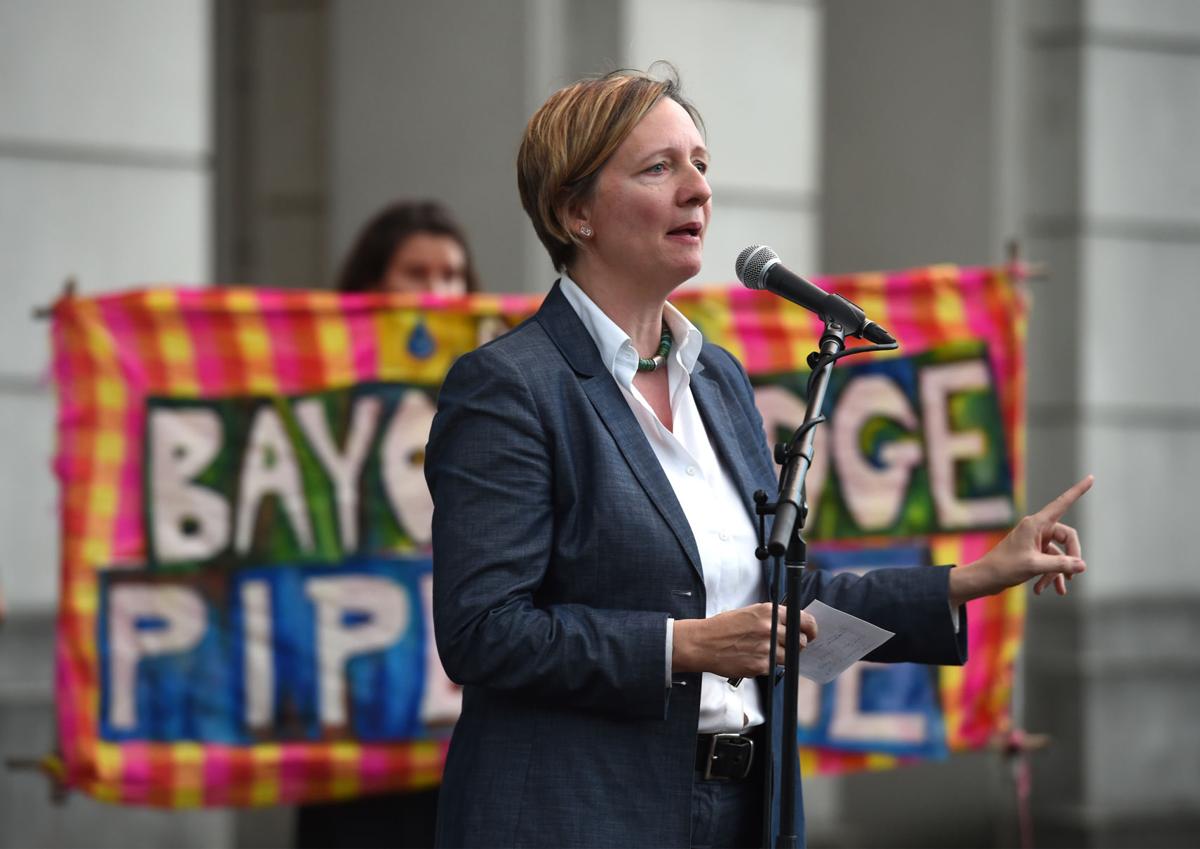 Advocate staff photo by David J. Mitchell -- Residents and environmentalists show their displeasure with the Bayou Bridge pipeline Wednesday, Aug. 23, 2017, inside the St. James Parish Council chambers in Vacherie. The Parish Council later narrowly voted to uphold a prior land use approval that allows the last leg of the 162-mile crude oil pipeline to pass through the parish to tank farms near the Mississippi River in western St. James.

A pipeline marker stands along the spoil banks of an existing-pipeline canal, the same corridor that would be used for the proposed Bayou Bridge Pipeline, Thursday, January 26, 2017, in the Atchafalaya Basin.

Trees and brush grow along the side of an existing-pipeline canal, the same corridor that would be used for the proposed Bayou Bridge Pipeline, Thursday, January 26, 2017, in the Atchafalaya Basin.

Atchafalaya Basinkeeper Dean Wilson steers a boat through an existing-pipline canal, the same corridor that would be used for the proposed Bayou Bridge Pipeline, Thursday, January 26, 2017, in the Atchafalaya Basin.

The Bayou Bridge pipeline, a controversial crude oil line proposed through the heart of the Atchafalaya Basin, cleared key permitting thresholds Thursday and is closing in on a construction start.

The U.S. Army Corps of Engineers announced Thursday evening that it issued a series of permits for the 162-mile pipeline project through south Louisiana after an environmental assessment, a review of the line's impact on federal land easements and all comments on the project.

“The Corps neither supports nor opposes this project,” said Col. Michael Clancy, commander of the New Orleans District, said in a statement. “Our mission is to apply the best science, engineering and information available to determine if a proposed project complies with all regulations under our authority.”

The line will ultimately be able to carry 480,000 barrels of light or heavy crude oil per day from Lake Charles to Mississippi River oil tank farms in St. James Parish south of Baton Rouge. Crude from the St. James facilities will be redistributed to refineries in the Baton Rouge area which employ thousands of workers.

In connection with the permits issued Thursday, the Corps also needed a water quality certificate from the state Department of Environmental Quality, which was issued Tuesday.

Vicki Granado, a spokeswoman for the company behind the project, Energy Transfer Partners, said the permits from the Corps put the company in the final step of the process. The company still needs a permit from the Atchafalaya Levee District and approval from the Coastal Protection Restoration Authority, Granado said, "both of which we anticipate receiving shortly."

"We will begin mobilizing for the start of construction once we receive these approvals," she said in a statement Thursday night.

The state Department of Natural Resources and the St. James Parish Council already signed off on the project earlier this year.

But the pipeline also has fired up environmental groups worried about the safety track record of the company behind it, Energy Transfer Partners, and the ecological impact yet another pipeline tracing through south Louisiana's big swamp basin will create.

Joey Mahmoud, with Energy Transfer Partners,  has said that current regulations will require them to restore parts of the Atchafalaya that are damaged during the installation process.

Environmentalists said they are still prepared to fight Bayou Bridge.

"We know what nonviolent resistance looks like. We've all done it," said Anne Rolfes, director of the Louisiana Bucket Brigade. "Our bodies will be in the way of this pipeline."

Hundreds of people have come out to public meetings to voice their opposition to Bayou Bridge, and Rolfes is ready to turn back to social media to spread the word that she isn't ready to give up the fight, even if she has to stand in front of the bulldozers.

Bayou Bridge is "such a terrible idea" because the infrastructure imperils the livelihoods of crawfish farmers in the Atchafalaya Basin and a spill would endanger residents as well as anyone who relies on nearby bodies of water for their drinking supply.

Asked if her organization was preparing any legal efforts to block construction, Rolfes said they would consider "every possible opportunity."

She was particularly disappointed by Gov. John Bel Edwards. Her group and others has demonstrated outside the governor's mansion on multiple occasions in the past few months calling on Edwards to demand the Corps conduct an environmental impact statement, which he has declined to do.

A spokeswoman for Edwards said the governor has heard the concerns of environmentalists.

"The governor's office has met and corresponded with members of the Louisiana Bucket Brigade on several occasions to discuss their concerns about the Bayou Bridge Pipeline, with the most recent meeting taking place last week," Shauna Sanford, communications director for Edwards, said in a statement Thursday. "Their allegation that we have not been responsive is unfounded."

A day earlier,the Louisiana Bucket Brigade sued Edwards's office and the state custodian of records for access to records of meetings and internal communications over the controversial line, the group said.

The twin lawsuits filed Wednesday in the 19th Judicial District Court in Baton Rouge come a week after the Louisiana Bucket Brigade and others had filed separate public records requests to Bayou Bridge LLC, DEQ and the Louisiana Department of Natural Resources for the release of records, the Bucket Brigade said in a statement.

The group added their records requests and the new suits are aimed at ensuring Louisianans "can transparently evaluate the companies’ operations and protect the interests of people who stand to be affected and the environment."

The Corps said on Thursday that it required Bayou Bridge to avoid wetlands as much as possible, but the pipeline will still temporarily affect 455 acres of jurisdictional wetlands and convert 142 acres of forested wetlands to permanent pipeline right-of-way.

As part of the wetlands permit, Bayou Bridge was required to buy 708 acres in wetland mitigation banks, the Corps statement said. Corps officials added that "the combination of avoidance, minimization and mitigation will result in zero net loss of jurisdictional wetlands."

“The Corps carefully weighed the energy benefits of the project while ensuring environmental protections remain in place,” said Martin Mayer, chief of the Corps' New Orleans District Regulatory Branch. “We will remain vigilant in monitoring the project to ensure that the pipeline remains in compliance with all permit conditions.”

VACHERIE — A split St. James Parish Council cleared the way Wednesday night for the controversial Bayou Bridge pipeline to move through the pa…

In response to the records lawsuit, Sanford that the governor's office already fulfilled one request and told the group it was reviewing its second request when a third request was received. Sanford said the office also responded to that third request that "the additional information would be included in the" records search, but the group filed the suits "without any further communication to our office."

"We are in the process of fulfilling the remaining public records request and will provide any responsive documents we may have once they have been compiled," Sanford said.

The Bucket Brigade, in its suit, claimed its first request resulted in minimal information. An email from the governor's office attached to the lawsuit indicates there were no records of meetings between Edwards or his staff and employees or agents of Bayou Bridge, Energy Transfer Partners and other companies tied to the project.

Jody Meche, whose family has fished the Atchafalaya Basin for three generations, has no philosophical objection to fossils fuels, no desire to…

The Bucket Brigade has regularly pointed out that Energy Transfer Partners is behind the company behind the Dakota Access Pipeline in North Dakota and, along with Sunoco, which ETP owns, have a record of oil spills.

As oil and gas production has boomed in the midsection of the nation, fears of new leaking pipelines has stirred public protests and political push back. The unrelated Keystone Pipeline leaked more than 200,000 gallons of oil underground last month in South Dakota after an apparent pressure loss cracked the line, leaving a black stain on the surface.

That line is owned by Canadian oil company TransCanada, which has been seeking an extension of the line known as the Keystone XL. That proposed pipeline has prompted years of opposition and protests.

Bayou Bridge pipeline winds up in court as environmentalists, state square off

A state judge is weighing arguments about whether to overturn a necessary permit for Bayou Bridge, the proposed crude oil pipeline that would …