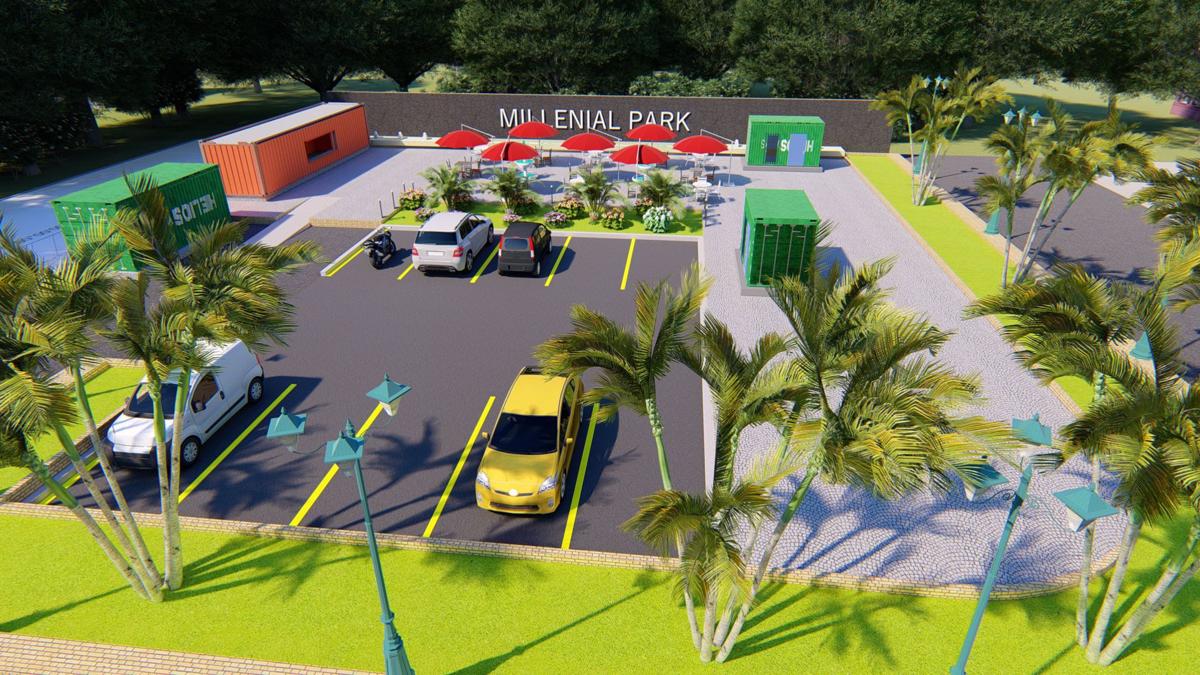 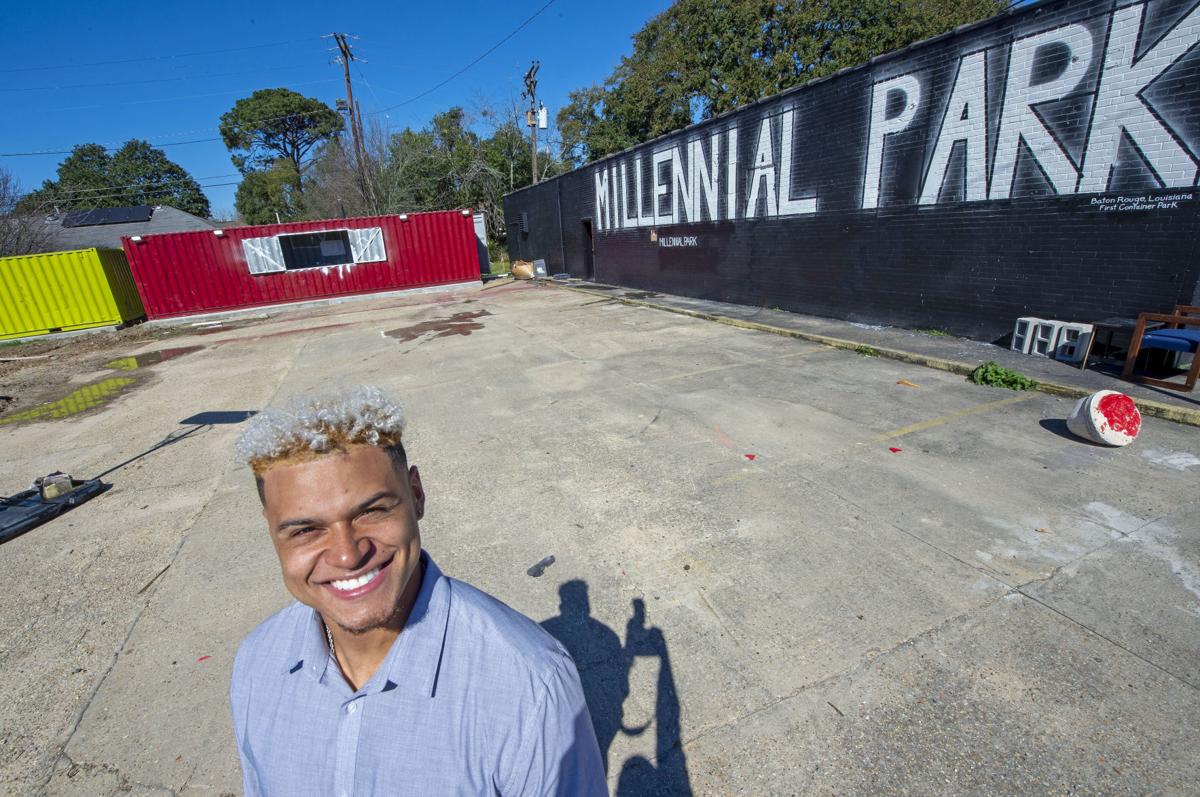 Millennial Park developer Cameron Jackson wants to sell alcohol at the Florida Boulevard open air food court, which is made of shipping containers. Some of the neighbors are against the idea, citing issues with traffic, parking and loud music. 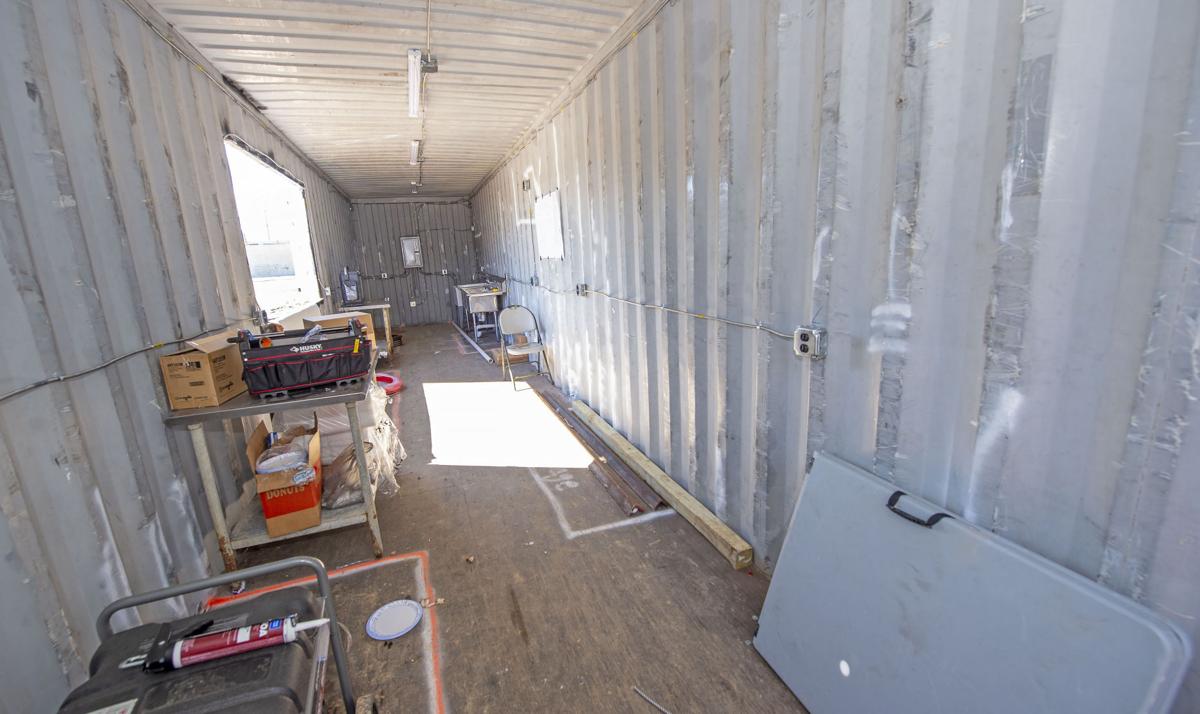 Intereor of a shipping container. Cameron Jackson, a young black man and former college athlete, recently moved back to Baton Rouge and has decided to use land donated to him by his grandfather at 3817 Florida Blvd, across from BR General, to develop what he’s calling Millennial Park which will feature industrial shipping containers converted into food stands. Jackson and construction at the site Friday Feb. 14, 2020, in Baton Rouge, La. This project is being lauded as the kind of innovative development that’s wanted and needed for the surrounding community. 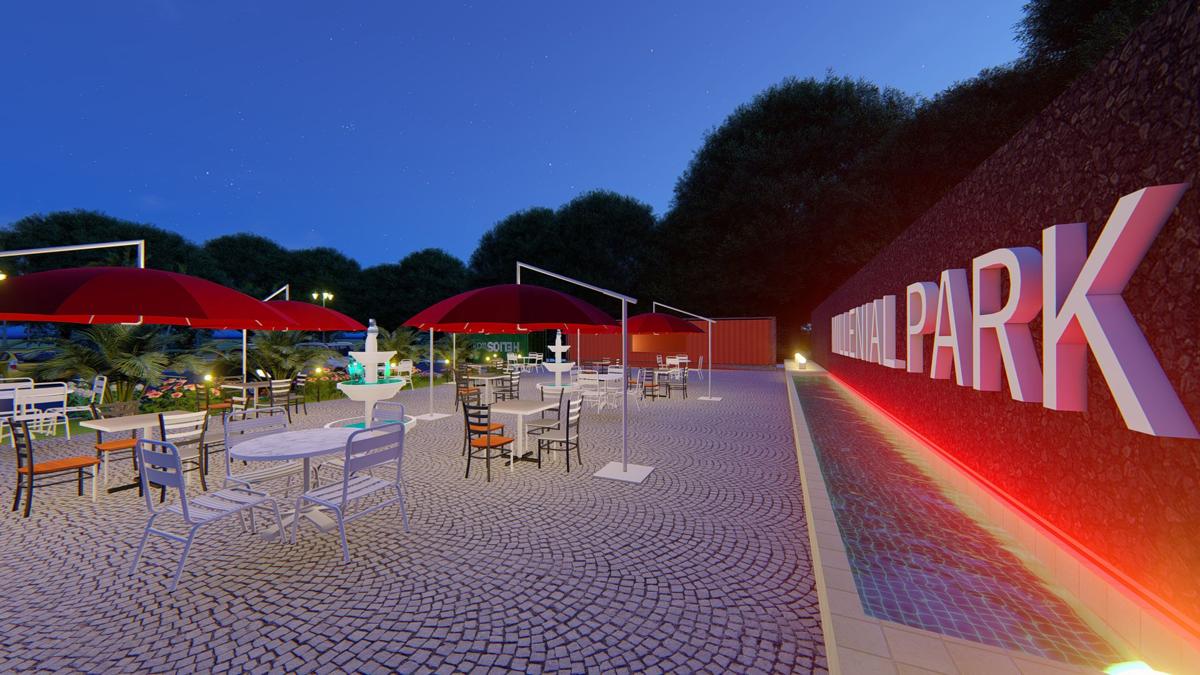 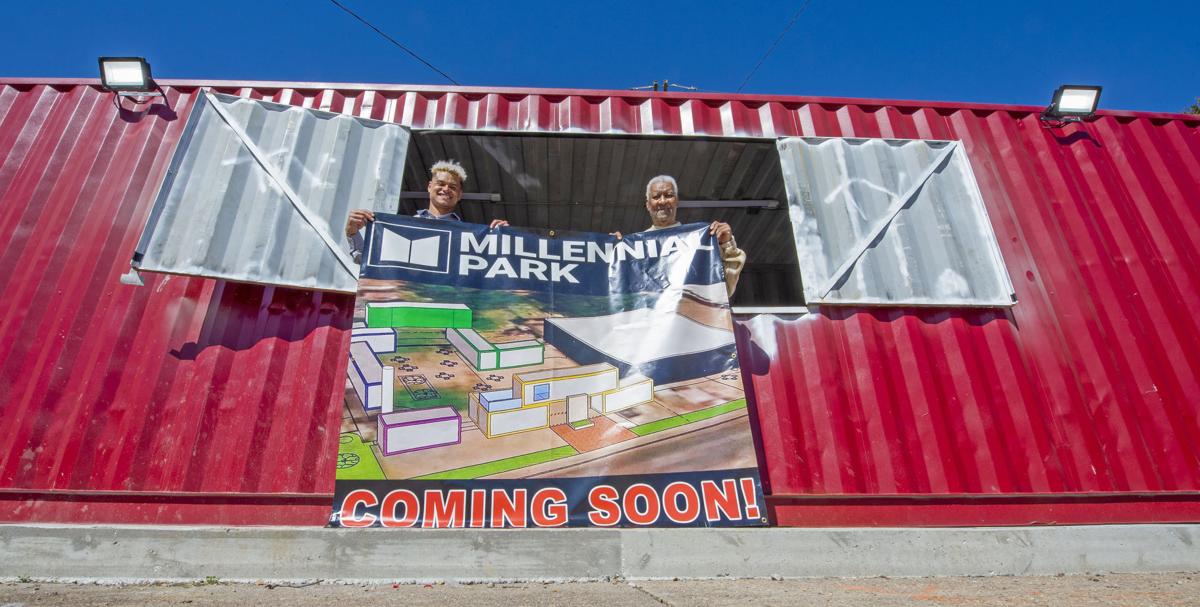 Cameron Jackson, left, and his grandfather C. J. Jackson hold a sign of the planned development in front of one of the shipping containers on site. Cameron Jackson, a young black man and former college athlete, recently moved back to Baton Rouge and has decided to use land donated to him by his grandfather at 3817 Florida Blvd, across from BR General, to develop what he’s calling Millennial Park which will feature industrial shipping containers converted into food stands. Jackson and construction at the site Friday Feb. 14, 2020, in Baton Rouge, La. This project is being lauded as the kind of innovative development that’s wanted and needed for the surrounding community. 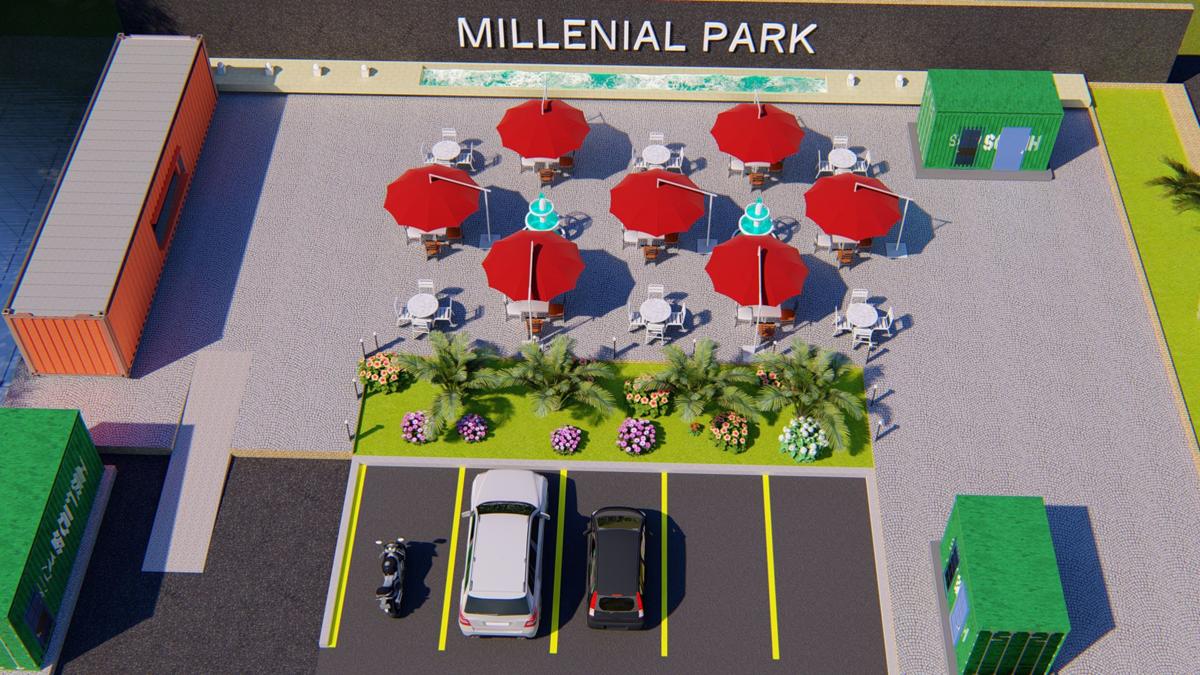 Cameron Jackson may be young but he has a lot of big ideas.

And the former college athlete has decided to bring one of them to Baton Rouge, in a part of town most developers don't take seriously for innovative business ideas.

"I saw an opportunity when other people didn't," the 24-year-old says about his plan to transform an undeveloped section of land across from Baton Rouge General Medical Center's Mid City campus into an outdoor food court featuring eateries housed in re-purposed industrial shipping containers.

He's calling it Millennial Park. It's set to open in early March.

"I'm hoping to get enough support from this city; that everyone thinks it's so different and not like anything they've ever seen before," he said. "I've always stood out and been different. I just believe in myself."

Born in Baton Rouge, Jackson has lived in Houston most of his life. He recently moved back after doing a bit of traveling following his matriculation from Coastal Carolina University, where he played football.

His return to Baton Rouge was prompted by his grandfather's decision to hand over to him ownership of a large swath of land along Florida Boulevard. And with a little help from his parents, Jackson has already invested some $100,000 into its transformation.

Being a young, business-savvy black man in Houston wouldn't make him stand out, he said. But he knew it would in Baton Rouge, where he felt his idea would stand a better chance to thrive.

Jackson's initial concept was modeled after outdoor food courts he had seen in cities like Dallas and Houston where food trucks are clustered at parks where patrons can sit, eat and socialize. But recent travels to Jamaica inspired his twist on the idea: using shipping containers instead of food trucks.

"They're more durable, have cheaper overhead cost to put in operation and it's more eco-friendly," he said.

Jackson's Millennial Park will be located at 3817 Florida Blvd. It'll initially feature one shipping container restaurant he'll manage specializing in Caribbean-style food and fried turkey wings, another recycled container will serve as restrooms for the site, which will have outdoor seating capacity for 100 people and a small parking lot.

Jackson says he researches the use of every shipping container he recycles to ensure they weren't used to transport things like harmful chemicals. And those that are in good physical condition are shipped to a local facility where they are cleaned and sterilized before they'll be placed at his development to be outfitted for their new purpose.

He's hoping other entrepreneurs or restaurateurs will join, and he's giving the option to either build out their own containers or rent the space from him and he'll re-purpose it for their needs.

Using recycled shipping containers helps business owners avoid high rents and gives them the option to quickly relocate if they choose to.

"I think this is one of the best projects I've been able to see come into that area which is on a resurgence," said Jerry Jones, executive director of the Baton Rouge North Economic Development District.

Jackson recently presented his business plan to the BRNEDD board, whose members were impressed and encouraged by his idea, which includes expanding his development with a multi-use site with office-business suites, more restaurants and retail spaces all using recycled shipping containers.

"It's going to be a great venue," Jones said. "A first of its kind in Louisiana. These are the type of developments we're excited about seeing."

Jackson's development will be in the shadow of C.J.'s Barbershop, the popular business his grandfather has operated for years on Florida Boulevard.

His father, Curtis Jackson, said it took seeing his son's vision slowing coming to life for the family and others to fully grasp what Cameron Jackson is trying do. Curtis Jackson added that he and his wife had no issue jumping on board when their son first approached them with it given how serious he was about making it happen.

"I really went in and started investigating after he initially told us," Curtis Jackson said. "I'll keep going with an idea until something doesn't make sense anymore. But the more I keep looking into what he wanted to do, it kept making sense so I told him we have to pursue it."

It also helps that his son has good business acumen. While in college Jackson successfully launched his own supplement and protein brand, which his fellow teammates used, and his own clothing line, revenue from which served as his investment for Millennial Park.

Curtis Jackson said he helped his son broker a partnership with Marvin Glover of GMG Management. Glover is helping Cameron Jackson with the management of the initial restaurant he'll open at Millennial Park.

Since construction at the site is in full swing, Cameron Jackson says passers-by often stop and inquire about the project, encouraging him to complete it so they can return and patronize his business.

"I want to help build Baton Rouge up," he said. "I want to expand, make this a family thing. I'm ready to get started on phase two and get more containers out here."