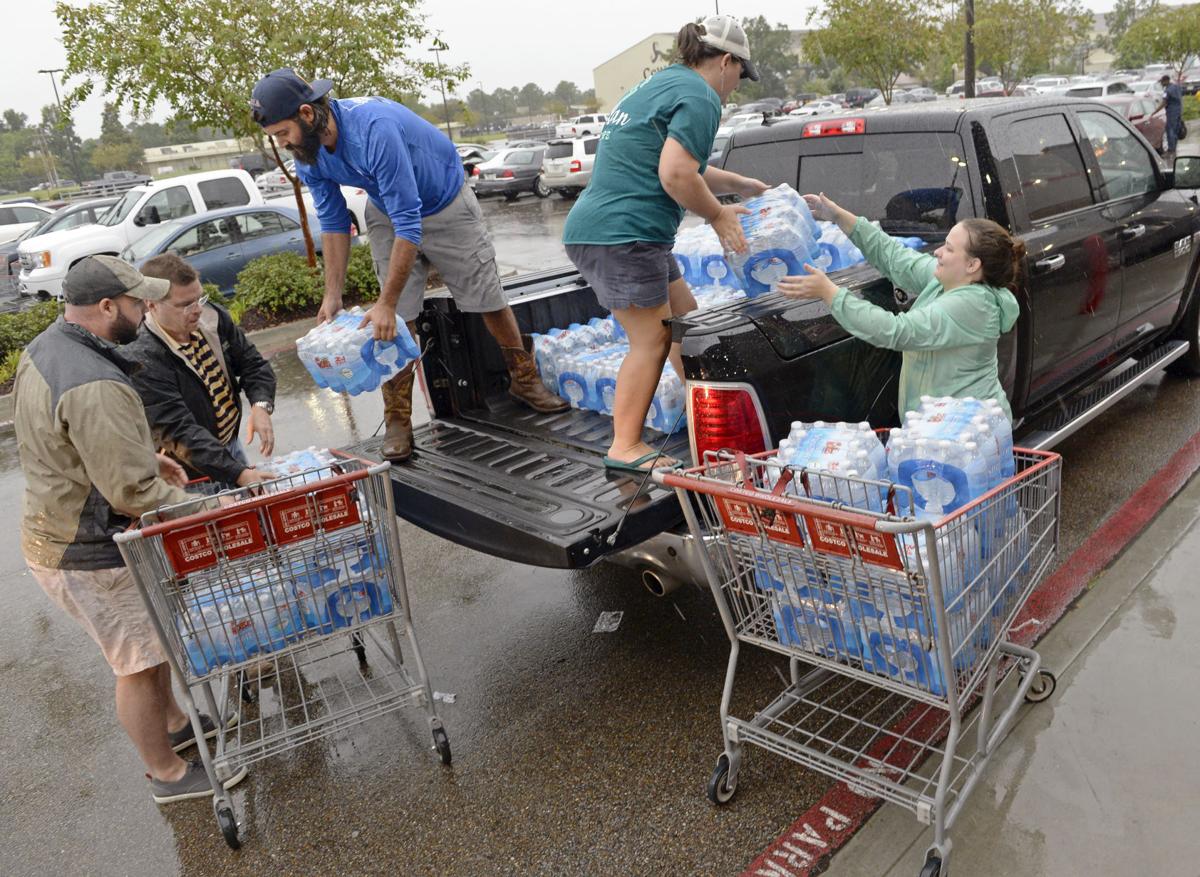 From left, Hunter Miller, Riley Hagan, Corey Beasley, Cayla Millet and Hannah Rothermel offload relief supplies In the driving rain Monday August 28, 2017, in Baton Rouge, La.. Supplies were gathered at Costco which the Cajun Navy will then deliver to the storm ravaged areas. 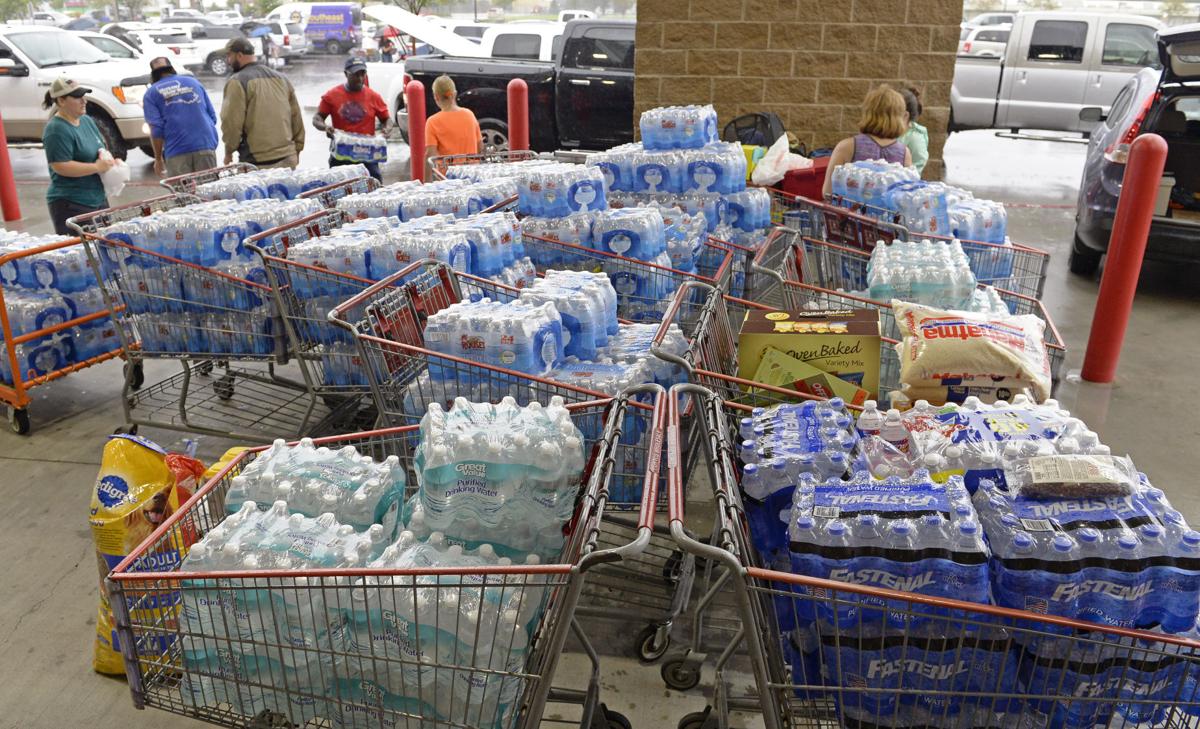 Supplies are gathered at Costco which the Cajun Navy will deliver to the storm ravaged areas Monday August 28, 2017, in Baton Rouge, La.. 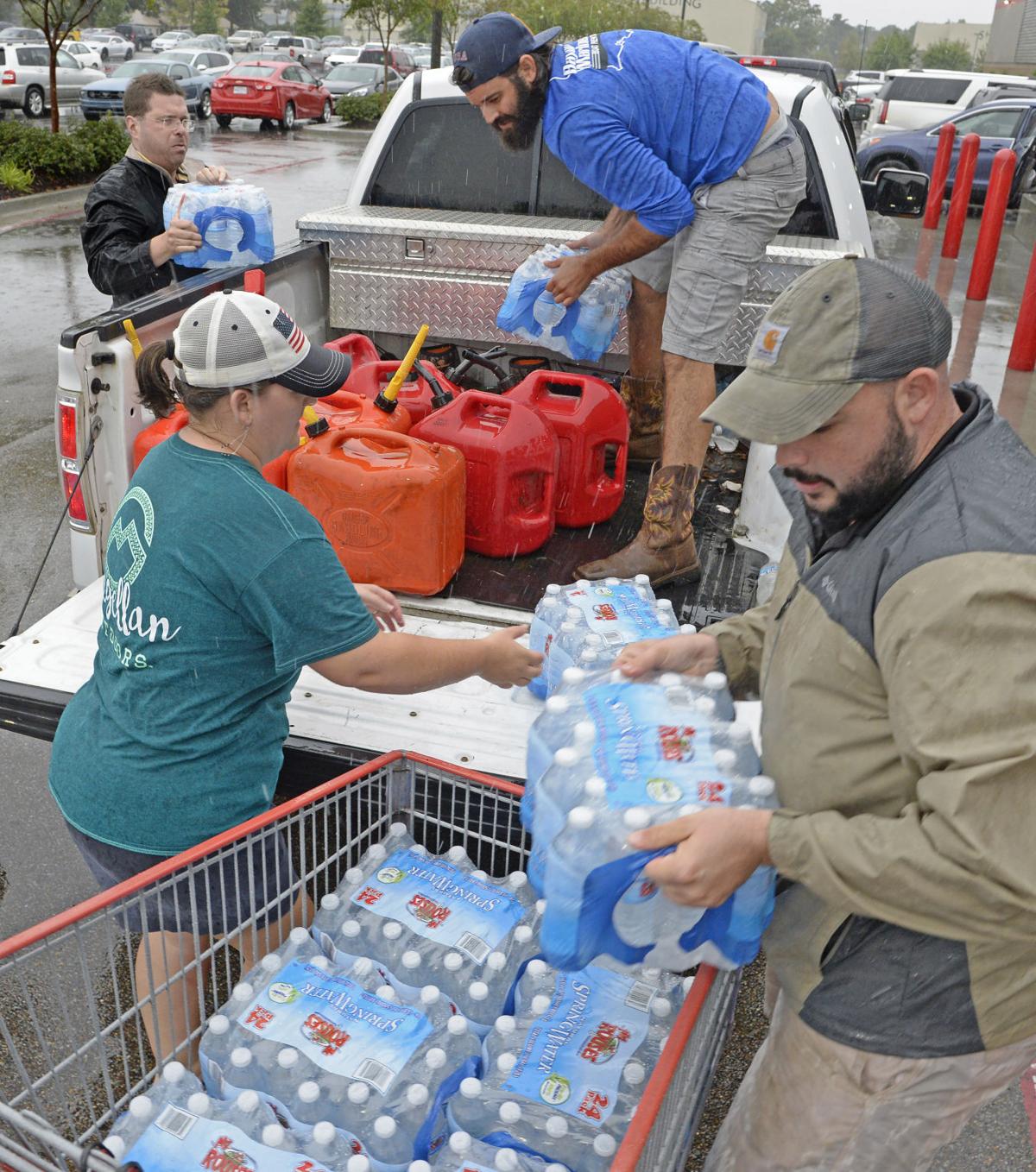 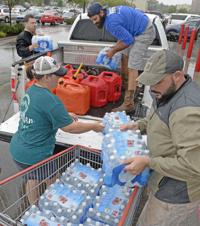 From left, Riley Hagan, Cayla Millet, Corey Beasley and Hunter Miller offload relief supplies In the driving rain Monday August 28, 2017, in Baton Rouge, La.. Supplies were gathered at Costco which the Cajun Navy will then deliver to the storm ravaged areas.

From left, Hunter Miller, Riley Hagan, Corey Beasley, Cayla Millet and Hannah Rothermel offload relief supplies In the driving rain Monday August 28, 2017, in Baton Rouge, La.. Supplies were gathered at Costco which the Cajun Navy will then deliver to the storm ravaged areas.

Supplies are gathered at Costco which the Cajun Navy will deliver to the storm ravaged areas Monday August 28, 2017, in Baton Rouge, La..

From left, Riley Hagan, Cayla Millet, Corey Beasley and Hunter Miller offload relief supplies In the driving rain Monday August 28, 2017, in Baton Rouge, La.. Supplies were gathered at Costco which the Cajun Navy will then deliver to the storm ravaged areas.

Waters began creeping up neighborhood streets Monday afternoon in pockets of southwest Louisiana and, to the east, in sections of New Orleans as Tropical Storm Harvey dumped seemingly endless rains, and with forecasts predicting continued rainfall in the coming days across a large portion of the state, residents and state officials are bracing for more flooding.

In Lake Charles, Calcasieu Parish Sheriff Tony Mancuso watched as the area held out reasonably well Monday despite daylong rains. With heavy precipitation on the horizon, he said, there's little hope they will be spared severe flooding.

"It's not going to take much," Mancuso said. "We just can't take any more. … Our rivers are done, our bayous, our ditches, there's not a place in Calcasieu Parish, every place is full and the water just has nowhere to go."

Mancuso joined New Orleans officials in asking residents to stay off the streets and avoid driving Tuesday, hoping to increase safety as well as ease the jobs for emergency responders and public works officials.

Mitch Landrieu: Everyone in New Orleans should stay home Tuesday because of Harvey

While Baton Rouge officials also prepared for bleak weather with sandbag pickup locations and increased emergency personnel, the region's day-to-day operations Tuesday are expected to go on as usual, as forecasts look the least menacing for the Red Stick.

"In all likelihood, the worst is yet to come for those of us here in Louisiana," Gov. John Bel Edwards said Monday. "It does remain a named tropical storm and it's going to drop an awful lot of rain."

In southwest Louisiana, 10 to 15 inches of rain is expected over the next two days, in addition to the 8 inches that fell Monday, National Weather Service meteorologist Donald Jones said from the agency's Lake Charles Office. In the Baton Rouge region, rainfall estimates through late Wednesday are around 4 to 6 inches, Jones said, while New Orleans is looking at 5 to 10 inches.

But Jones warns of strong bands of rain, which will sporadically ride on the outskirts of Harvey, that could drop heavier downpours on different localities. Those high volumes of rain will continue to pose flash flooding — and more extensive flooding — risks for much of the state, especially in the southwest portion, Jones said. They also bring with them a threat of tornadoes, he said.

"We're prepared for the worst and hoping for the best," Mancuso said Monday. "We're really at Mother Nature's mercy."

The Calcasieu Sheriff’s Office deployed its high-water team Sunday and increased patrols by 50 percent in preparation for the continued, heavy rainfall. Mancuso said many of Louisiana’s sheriff’s offices to the east, as well as state agencies, have offered manpower to his region contingent on the extent of flooding and damage.

“When it’s something like this, it’s all hands on deck,” said Robert Daughdril, a retired emergency planner assisting the Calcasieu Parish Office of Homeland Security and Emergency Preparedness. He said also waiting for deployment are 10 boats at the Lake Charles Civic Center, all of which have been volunteered by The Louisiana Volunteer Response Network, more commonly known as the Cajun Navy.

“They came over from the Crowley area, the Acadiana parishes,” Daughdril said. “We’re going to use them as much as needed.”

And while some Cajun Navy citizen-sailors have remained in Louisiana awaiting a domestic response, convoys of others continued to make their way west into Texas.

Since Friday, east Texas has been devastated by Harvey’s torrential rains, which brought unprecedented flooding to the Houston region.

LSU players were kept in the dark, much like everyone else.

"Texas, we love you. We're coming and we'll see you soon," said Jon Bridges Sr., founder of a group known as Cajun Navy 2016.

Bridges met with a fleet of volunteers, who gathered with their boats Monday afternoon at the Costco on Airline Highway in Baton Rouge before heading westward to once again mobilize to rescue people trapped by high waters.

The team formed last year to help rescue south Louisiana families caught in the inundation of the Great Flood of 2016. At the rally point Monday morning, group members said it's time to pay forward all the help they, their families and friends received last August. They picked up pounds and pounds of red beans and rice — with seasonings to match — to help feed Texas survivors, aid workers and the Cajun Navy itself. Shoppers assisted with the effort, giving money, picking up fuel bills and donating diapers and other supplies.

"We know what's going on. … Your heart just hurts when you see (conditions in Texas)," said Ruth Devall, of Greenwell Springs.

Graves said he was struck by the amazing generosity of the Cajun Navy volunteers, several of whom were victims of last summer's devastating floods. He said the volunteers had put up hundreds of dollars to pay for supplies, including bottles of water, cellphone batteries, protein bars and fuel.

"They're still not back in their homes and they've decided to stop their own recovery and rebuilding efforts to go help folks in Texas," Graves said. "It shows you the quality and character of the folks in Louisiana. It's really remarkable."

The group known as Cajun Navy 2016 plans to split into teams that will deploy to Dickerson, Galveston and east Houston. About 10 of the volunteers in the first deployment had some kind of EMT or military first response training, and they decided to disperse throughout the ranks.

Aisha Perry stopped off to deliver a shopping cart full of supplies. She wanted to do something to help, since her family is still trying to ride out the storm or, soon, evacuate. Her parents, two sisters and a brother all live in southeast Texas. One sister's home already flooded, and her mother and father live in Missouri City, amidst evacuation zones.

"Right now I don't know if they're going to be OK," she said.

Todd Terrell, who is leading the Cajun Navy 2016's effort, said Monday he expected at least 50 boats from the Baton Rouge area to head out and an equal number from the Lafayette and St. Charles areas. A full number will be available Tuesday, when the final group hits the road about 11 a.m.

One particularly helpful thing Louisiana volunteers can offer is airboats, which perform especially well in shallow water, Terrell said. The group was also working Monday to deliver another specialty vehicle — a cooking trailer.

Working in the rain, they hitched their boats, slung pallets of water bottles onto flatbeds, and packed vans full of toiletries and food.

Nearly everyone at the staging area Monday said they wanted to repay the help south Louisiana received just over a year ago.

"I couldn't not come. I'm young and able to help," said Lynzee Gianalva, of Independence.

David Pizzuto, of Gonzales, said he bought a boat two weeks before his own house took on several feet of water last August.

"God's got his hands in everything," he said.

This year, things are much more organized from the get-go. Last time, the Cajun Navy started by rescuing their own families and neighbors, then tried to figure out where else to help, said Casey Rabalais, of Central.

Before they even pulled out Monday afternoon, everyone coordinated to make sure they were all following the same social media accounts and subscribed to a common radio frequency so they can keep tabs on each other and make sure they reach survivors as quickly and efficiently as possible.

Still, it is a daunting task.

"The problem is everything keeps changing," Terrell said. "Texas doesn't even know how to handle this water."

No reports of shots fired at Cajun Navy in Houston, authorities say

Houston authorities say they have not received any reports of gunshots being fired at a group of volunteers known as the Cajun Navy, despite a…

HOUSTON (AP) — Crews overwhelmed by thousands of rescue calls during one of the heaviest downpours in U.S. history have had little time to sea…

Scientists: Harvey 'should serve as warning'; warming could cause much wetter storms in future

WASHINGTON (AP) — By the time the rain stops, Harvey will have dumped about 1 million gallons of water for every man, woman and child in south…

GONZALES — Box trucks and covered trailers were lined up Tuesday morning under an open-air barn at the Lamar-Dixon Expo Center, and workers we…