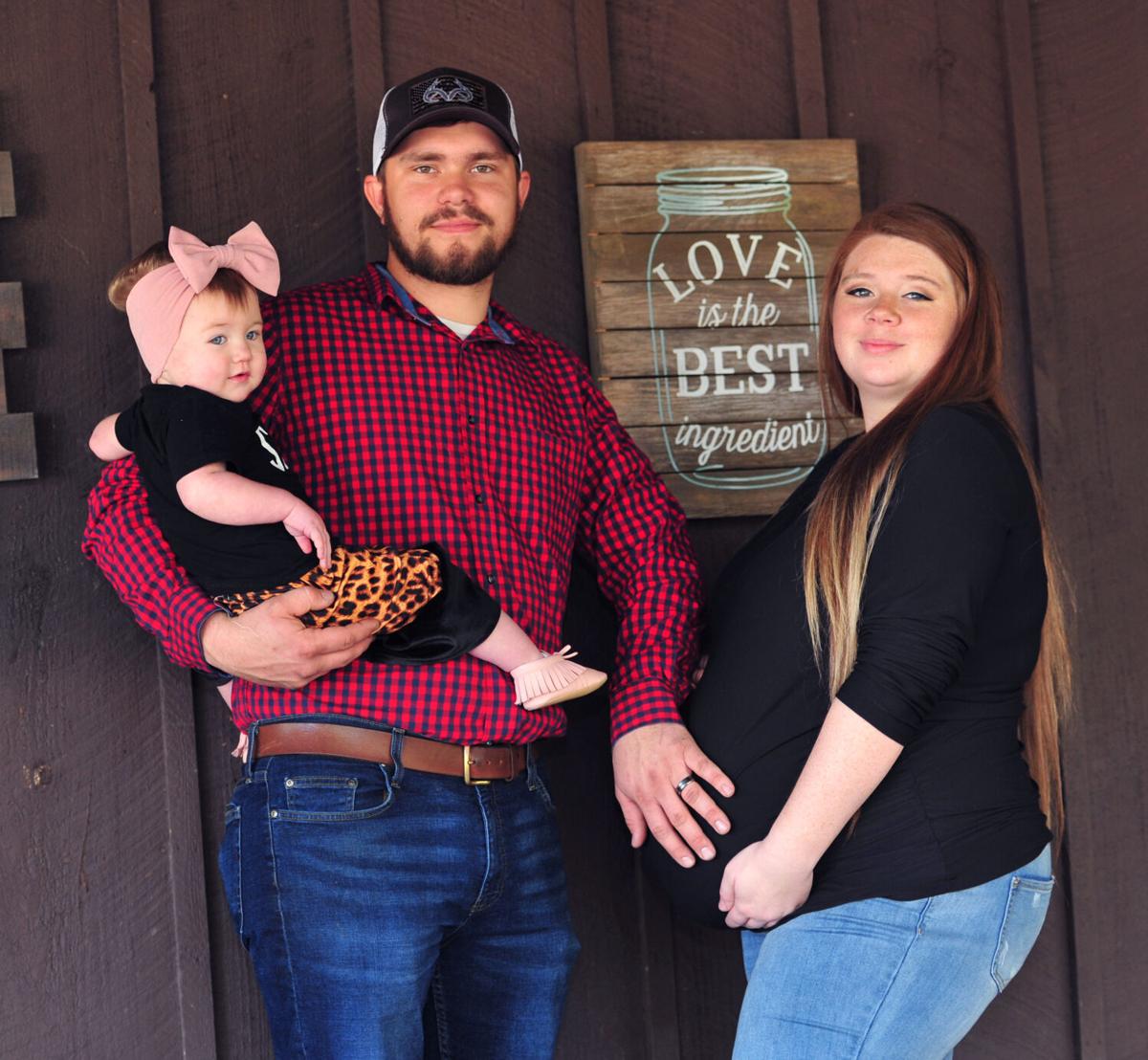 Expectant mother Hailey Deyoung, right, stands with her fiancé Jonathon Tessmer who is holding their 13-month daughter, Cleo Tessmer. Deyoung is due to give birth in January and the baby will be named Sunny Tessmer. 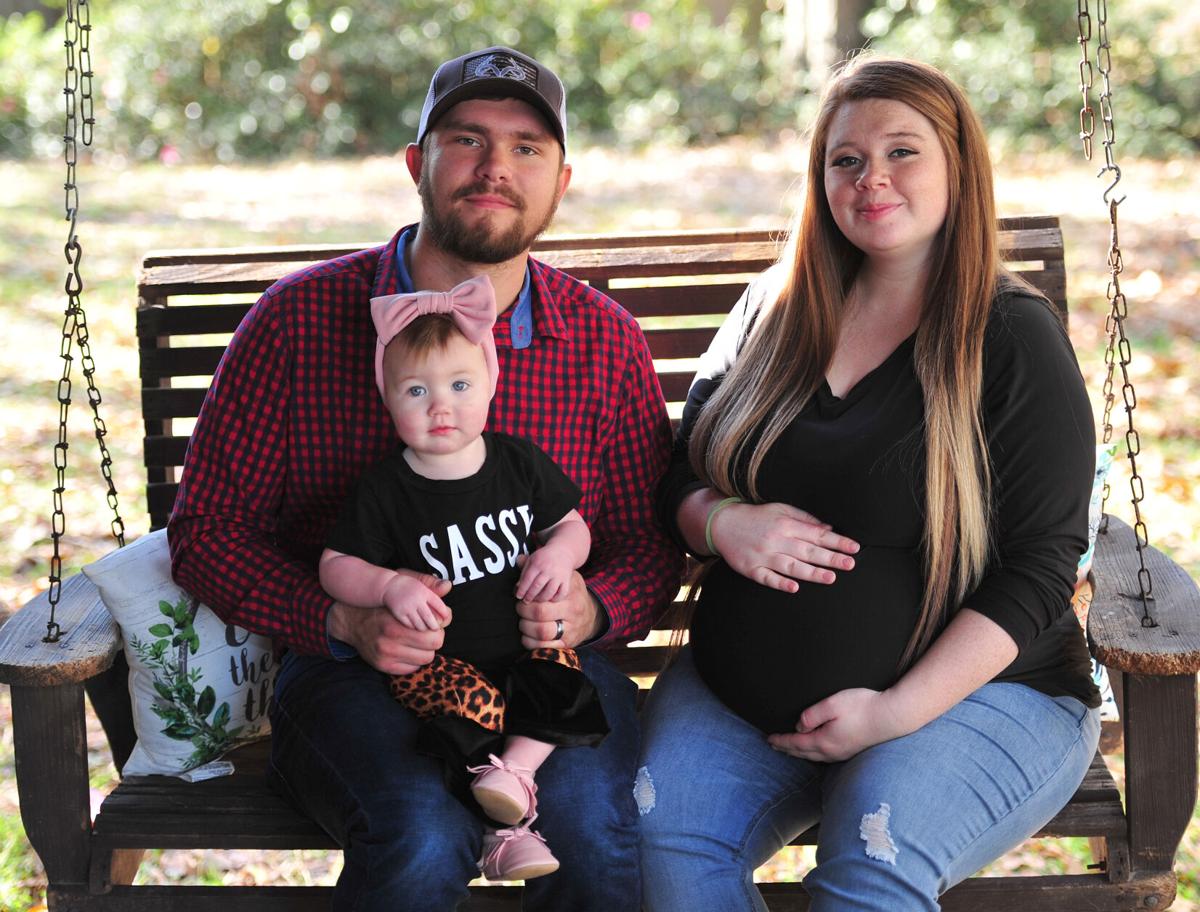 Expectant mother Hailey Deyoung, right, sits with on a swing her fiancé Jonathon Tessmer and their 13-month daughter, Cleo Tessmer. Deyoung is due to give birth in January and the baby will be named Sunny Tessmer. 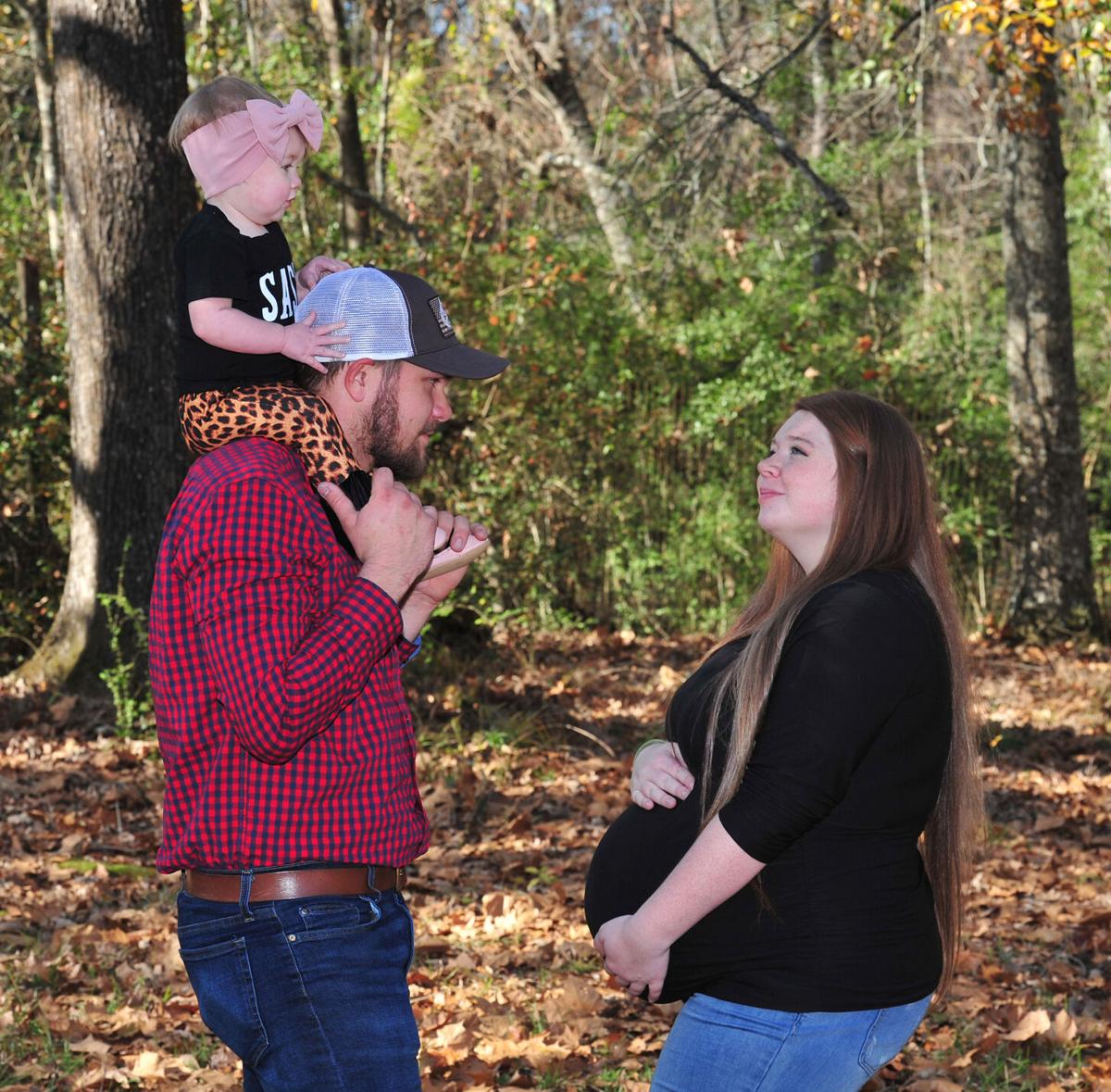 Expectant mother Hailey Deyoung, right, looks up at her fiancé Jonathon Tessmer and their 13-month daughter, Cleo Tessmer. Deyoung is due to give birth in January and the baby will be named Sunny Tessmer.

Expectant mother Hailey Deyoung, right, stands with her fiancé Jonathon Tessmer who is holding their 13-month daughter, Cleo Tessmer. Deyoung is due to give birth in January and the baby will be named Sunny Tessmer.

Expectant mother Hailey Deyoung, right, sits with on a swing her fiancé Jonathon Tessmer and their 13-month daughter, Cleo Tessmer. Deyoung is due to give birth in January and the baby will be named Sunny Tessmer.

Expectant mother Hailey Deyoung, right, looks up at her fiancé Jonathon Tessmer and their 13-month daughter, Cleo Tessmer. Deyoung is due to give birth in January and the baby will be named Sunny Tessmer.

When Dr. Candace Moore saw daily life grind to a halt this spring as people sequestered at home to blunt the spread of the coronavirus, she knew she’d be busy in nine months.

A tenured OB-GYN practicing at Baton Rouge General, she says she has a sixth sense about when to expect a rush of children coming into the world. She sees it after certain hurricanes, rare ice storms and she saw it after the Saints won the Super Bowl. And now she's seeing it again.

Early evidence suggests she's right, at least in Baton Rouge, where pregnancies are up modestly.

Maternity wards at Woman’s Hospital and Baton Rouge General have been buzzing in recent weeks, both noting a 10% to 20% respective rise in due dates above what doctors typically see in December and January.

“When there’s a crisis, people turn to one another, and this is one way they do that,” Moore said.

Unlike a power outage, she notes, people have air conditioning.

The science behind increased childbirths following disasters and collective happy moments is unclear. On one hand, there is ample anecdotal evidence from hospitals but with few formal studies to back the phenomenon.

The number of women seeking appointments for ultrasounds and prenatal visits has also been rising since Louisiana went into lockdown this spring.

“We are chockablock full,” said Cheri Johnson, chief nursing officer for Woman’s Hospital. “I didn’t think we could get any busier.”

Though it’s too early to tell whether the busy weeks ahead for hospitals will translate into an overall rise in birthrates, the recent trend locally runs counter to some predictions that the pandemic would lead to a baby bust rather than a boom.

Economic downturns historically see drops in fertility rates, which can be a bellwether for recessions and financial turbulence. That was the case during the 2008 recession, which resulted in a dip in childbirths as more young adults delayed pregnancies.

A Brookings Institute study relying on surveys, internet search trends and other metrics projects the country will see 300,000 to 500,000 fewer births in 2021 because of the pandemic. The study’s authors note with job losses, day care shortages and other strains brought on by the pandemic leading people to delay pregnancies as significant factors driving those estimates.

Heather Rackin, a sociology professor at LSU who researches fertility intentions and social demography, said the rise in pregnancy at Baton Rouge hospitals is surprising, but more data is needed to see what may be behind it.

“People are locked at home with their significant others, so maybe what else are they going to do?” Rackin said.

Conversely, she said, some couples may begin questioning their relationships because they’re around each other more: “And if you’re locked at home and you have kids, you have no time alone because they’re out of school.”

But the coronavirus pandemic has notable differences to previous historical events that have influenced birthrates.

Though many have drawn parallels to the 1918 influenza pandemic, COVID-19 tends to spare younger, healthier people in their child-bearing years compared with the century-old flu strain.

Less access to birth control because health clinics stopped elective procedures and certain in-person visits may also be a factor, Rackin speculated. And data on socioeconomic factors may also play a role, as well as the number of pregnancies that were planned versus unplanned.

“The pandemic has affected different other groups differently,” she said. “Higher-income people don’t seem to be as affected and might actually be doing a little better.”

Efforts to stem the spread of the coronavirus and keep women safe during their pregnancies and after have also changed how families gather for births. For instance, maternity wards now often have limits of just one to two visitors.

Despite some of the obstacles hospitals have faced and the unknown impacts the added stress the pandemic would have on mothers, some doctors have seen positive benefits in giving women time and space before and after their deliveries.

Doctors at Baton Rouge General and Woman’s Hospital have seen a recent increase in breastfeeding rates, which medical experts says brings with it lasting benefit for a child’s health and development, even into adulthood.

For Hailey Deyoung, 23, of Denham Springs, navigating her second pregnancy has come with its share of challenges, challenges much different than those she faced when she had her first daughter more than a year ago.

This time, when she went for her ultrasound appointments, she wasn’t able to bring her fiancé. Like many women, she also had to forgo a baby shower and a gender reveal party. And, as an essential worker at a medical supply company that’s been busy providing ventilators and oxygen equipment to hospitals, she has increased her vigilance to stay healthy.

The U.S. Centers for Disease Control and Prevention have urged women who are pregnant to take extra precautions against the coronavirus because much is still unknown about how the virus impacts pregnancies. Limited studies have been done on recently approved vaccines for women who are pregnant or breastfeeding.

Less than a month away from her due date, Deyoung and her fiancé have decided on the name Sunny for their daughter.

“It’s comforting to know there is some kind of light coming out of this with all these babies that are coming the next year and how much hope they’re going to bring people who’ve experienced so much loss,” Deyoung said. “We have gained so much through it all.”

After record coronavirus day, more vaccines headed to Louisiana; here's who can get them next week

A day after Louisiana saw a record-high increase in confirmed coronavirus cases, Gov. John Bel Edwards announced that the vaccine will be avai…