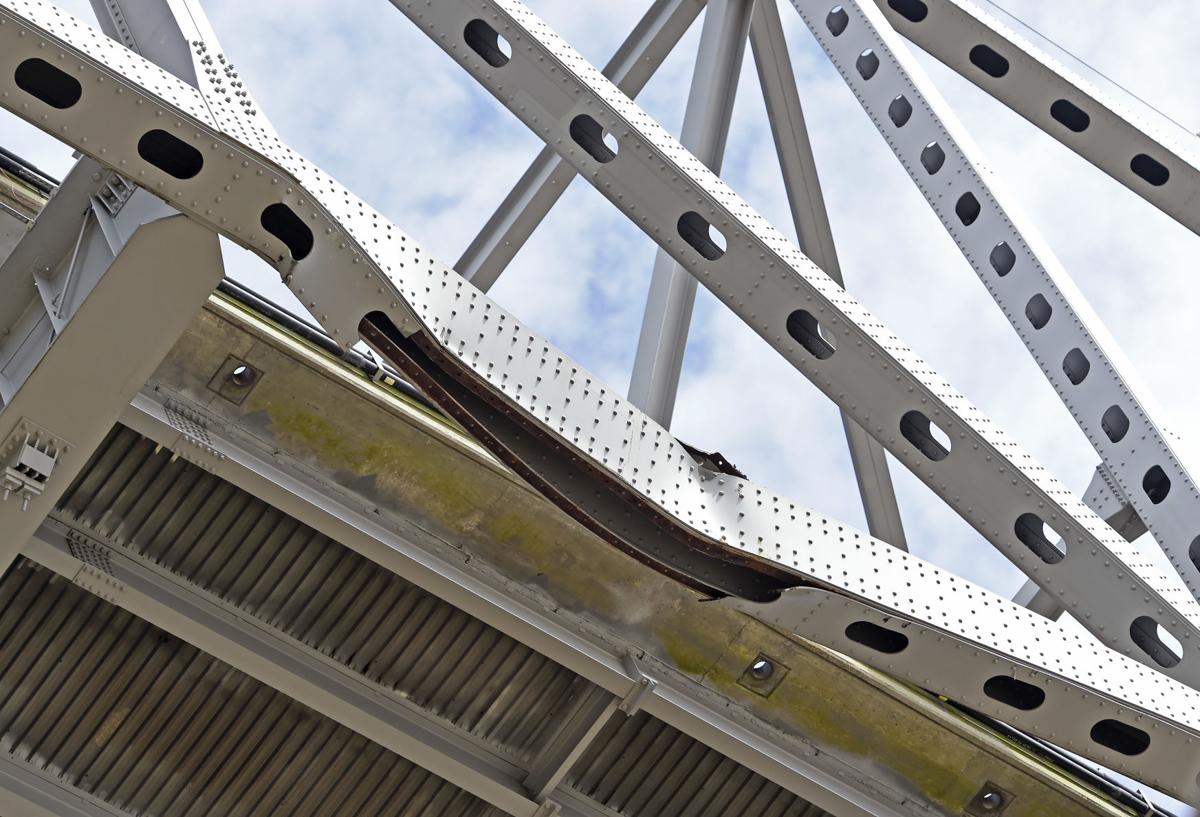 The damage. Gov. John Bel Edwards takes a boat tour of the damage to the Sunshine Bridge and then had a press conference about projected repairs to the structure Wednesday Oct. 24, 2018, in St. James Parish, La. 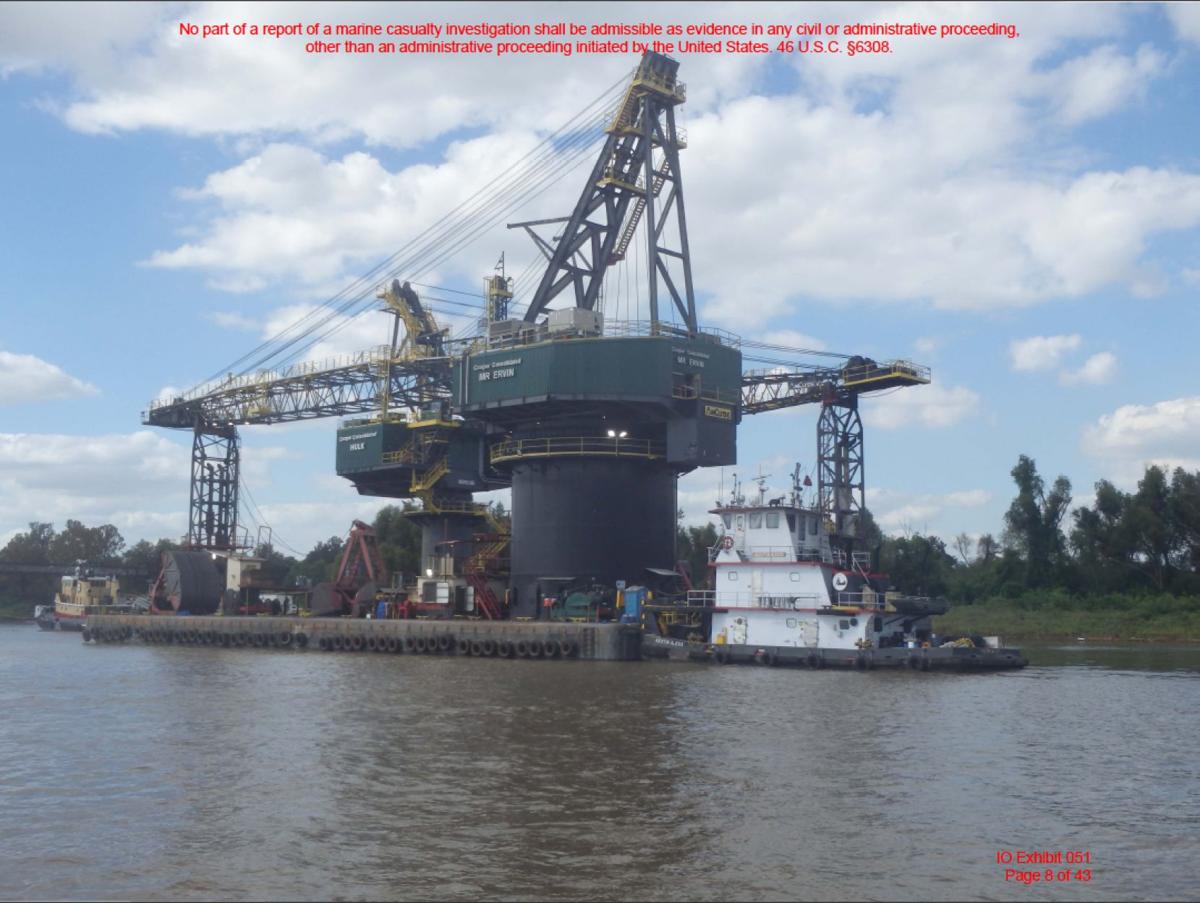 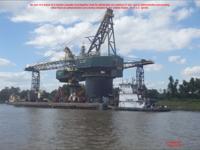 The Kristin Alexis tugboat, seen right, its attached to the rear of the Mr. Ervin crane barge, left, some time shortly after the barge ran into the Sunshine Bridge on the morning of Oct. 12. The Marquette Transportation tugboat was supposed to be pushing the barge under the bridge to bring it to a fleeting area in Darrow for the barge's owner, Cooper Consolidated. A panel of U.S. Coast Guard and National Transportation Safety Board investigators is looking into the crash the week of May 6 and has focused on the height of the crane, the bridge and what mariners and other involved in the crash knew about that information.

The damage. Gov. John Bel Edwards takes a boat tour of the damage to the Sunshine Bridge and then had a press conference about projected repairs to the structure Wednesday Oct. 24, 2018, in St. James Parish, La.

The Kristin Alexis tugboat, seen right, its attached to the rear of the Mr. Ervin crane barge, left, some time shortly after the barge ran into the Sunshine Bridge on the morning of Oct. 12. The Marquette Transportation tugboat was supposed to be pushing the barge under the bridge to bring it to a fleeting area in Darrow for the barge's owner, Cooper Consolidated. A panel of U.S. Coast Guard and National Transportation Safety Board investigators is looking into the crash the week of May 6 and has focused on the height of the crane, the bridge and what mariners and other involved in the crash knew about that information.

GONZALES — Marquette Transportation's president and other company officials on Saturday placed blame for the Sunshine Bridge crash squarely on the tugboat captain and pilot, saying they failed to follow the company's internal safety and voyage planning policies.

Capt. Harvey Mabile, one of the "go-to" field managers for a group of Marquette Transportation tugboat captains on the lower Mississippi River, said he got a call from the Kristen Alexis tugboat about the crash at 2 a.m. on Oct. 12.

Capt. Desmond Smith, then the vessel's master captain, told Mabile that a large crane barge that the tug had been pushing upriver from Convent to Darrow was stuck under the Sunshine Bridge near Donaldsonville.

The bridge has a wide and tall center span, also known as a channel span, that's able to accommodate even the tallest cranes on most days, Mabile said. He told a federal panel investigating the crash Saturday that he didn't understand initially how that the crane could be stuck.

"I went, 'How can you be stuck the under the bridge?' And he said he went through the alternate span," Mabile said Smith told him. "'I know we should have went under the channel span, Harvey, but we are stuck under the Sunshine Bridge.'"

The company's policies call for mariners to know the crane's and the span's dimensions to ensure vessels like the Mr. Ervin have room to fit under the bridge.

But chief among those policies, Marquette officials said Saturday, is the authority each employee is given to stop if something seems dangerous or makes them uncomfortable.

According to their testimony, both Smith and his pilot, Capt. Eugene Picquet III, said they had concerns about limited visibility pushing the huge Cooper Consolidated crane.

However, they never actually calculated the height of the lower alternate span or the crane. Smith said he relied on a word-of-mouth figure that was 6 feet short of the crane's actual height.

Mabile, a port captain who mostly oversees Marquette's "fleet" tugs ferrying cranes and other equipment along the river, told investigators he would have been the one to receive a call if either man had aired misgivings.

"It frustrates me that it wasn't done because that telephone call would have eliminated all of this from happening," said Mabile, who knew Picquet and Smith and helped recruit Picquet back to Marquette as a pilot only a month before the crash.

Both Smith and Picquet have been fired since the incident.

A joint panel of the U.S. Coast Guard and National Transportation Safety Board has been taking testimony since Monday at Lamar-Dixon Expo Center about the crash that shut the bridge for a month and a half.

Saturday marked the last day of the testimony in Gonzales. A public report on the findings of the hearing is not expected until late this year, at the earliest.

Crews spent several hours the morning of Oct. 12 adding water ballast to the crane so it could be lowered and removed from the bridge.

A state highway official told the panel last week that the bridge, on paper, should have come down because of the damage to key support beams. Repairs have cost upward of $6.5 million.

GONZALES — A crane barge crash into the Sunshine Bridge last fall should have caused the Mississippi River bridge to collapse, a top state hig…

The panel has been probing what led up to the decision by Smith and his pilot to use the lower, alternate span on the west side of the bridge with the towering Mr. Ervin crane in tow. According to prior testimony, Picquet had taken over control of the vessel from Smith not long before the crash. Smith had picked the crane up from the Convent Marine Terminal downriver.

While Marquette and Cooper officials have tried to make a point of the ultimate responsibility lying with the tug's captains, Michael Kucharski, the lead NTSB investigator for the crash, spent much of Saturday drilling into Marquette's internal training, safety and incident reporting systems.

Kucharski also questioned Marquette officials about what they did after a similar but less severe crane barge crash involving a Marquette tugboat and the nearby Veterans Memorial Bridge about a month and a half before the Sunshine Bridge crash.

The Aug. 30 crash with that Mississippi River bridge near Gramercy only became public Friday afternoon in testimony from a state highway official. It was part of a line of questioning from Kucharski zeroing in on Marquette's recent track record.

Kucharski on Saturday also briefly referenced another Marquette tugboat, the St. Rita, that sank with no injuries in March in high water conditions on the Mississippi River near LaPlace.

In the Gramercy incident, the Marquette tug Taylor Marie had also taken a crane under a lower alternative span on the west side of the bridge. The damage wasn't severe enough to force a closure or even lead to weight restrictions.

Mabile told the panel that tugs routinely take alternative spans to move some kinds of cargo, especially upriver. But, he said, the captains are told never to push a barge or other vessel under an alternative span when the cargo is higher than the tug boat. He said he instructs captains to always take crane barges under the main channel span.

Mabile noted that unlike the Sunshine Bridge alternative span, which has a measured height, the Gramercy bridge's alternative span doesn't, so the captain involved in that crash couldn't calculate if he could make it under the bridge.

According to legal correspondence displayed by the panel Saturday, the captain of the Taylor Marie was fired. Mabile spoke with the crew of Taylor Marie and another tug contracted to handle cranes, reminding them to use the channel span only.

Mabile told Commander Matthew Meskun, the lead Coast Guard investigator, that he also reminded other tug captains to use the main channel span only with the big cranes during a regular crew change meeting after the Aug. 30 crash.

Mabile said he could not specifically recall if Picquet and Smith were in that meeting but they normally would have been there.

Marquette officials added that their tug captains now have lists with the heights of cranes from Cooper Consolidated and Associated Terminals. Cooper officials testified Friday they now require their cranes to go under the main channel of bridges.

Damon Judd, president of Marquette, said in later testimony that 2018 has been a challenging year for the company's inland marine operations.

But, he said, the industry remains safer than other transportation modes. He added that at some point, the company has to rely on the common sense of its mariners.

With the end of the investigative hearings Saturday, Meskun said the panel will analyze the facts and must submit an investigative report to Coast Guard Sector New Orleans by early August. Internal reviews within the Coast Guard and the development of recommendations could mean the findings won't be public for about a year.

Kucharski said the NTSB will issue its own report that, if it is public, could be released later this year.

Testimony: Height of barge that crashed into Sunshine ridge known only by top company officials

GONZALES — A  top executive with Cooper Consolidated, the owner of a large crane barge that accidentally rammed into the Sunshine Bridge last …