The East Baton Rouge Parish registrar of voters has sent 29 questions to the state attorney general in anticipation of a petition seeking a vote to create the city of St. George in the southeastern part of the parish, with the questions focusing, among other things, about ways names could be added or stricken from the petition.

Those gathering signatures for a vote to create St. George are expected to submit their petition to Registrar Steve Raborn’s office once they obtain signatures from 25 percent of the registered voters in the boundaries of the proposed city. They expect that will come to 12,951 signatures, and Raborn said Wednesday his office wants to ensure they know the “ground rules” in the leadup to verifying the petition.

“No doubt, it will be a very contentious issue and we just wanted to make sure we had all our questions nailed down in advance,” Raborn said in a phone interview. 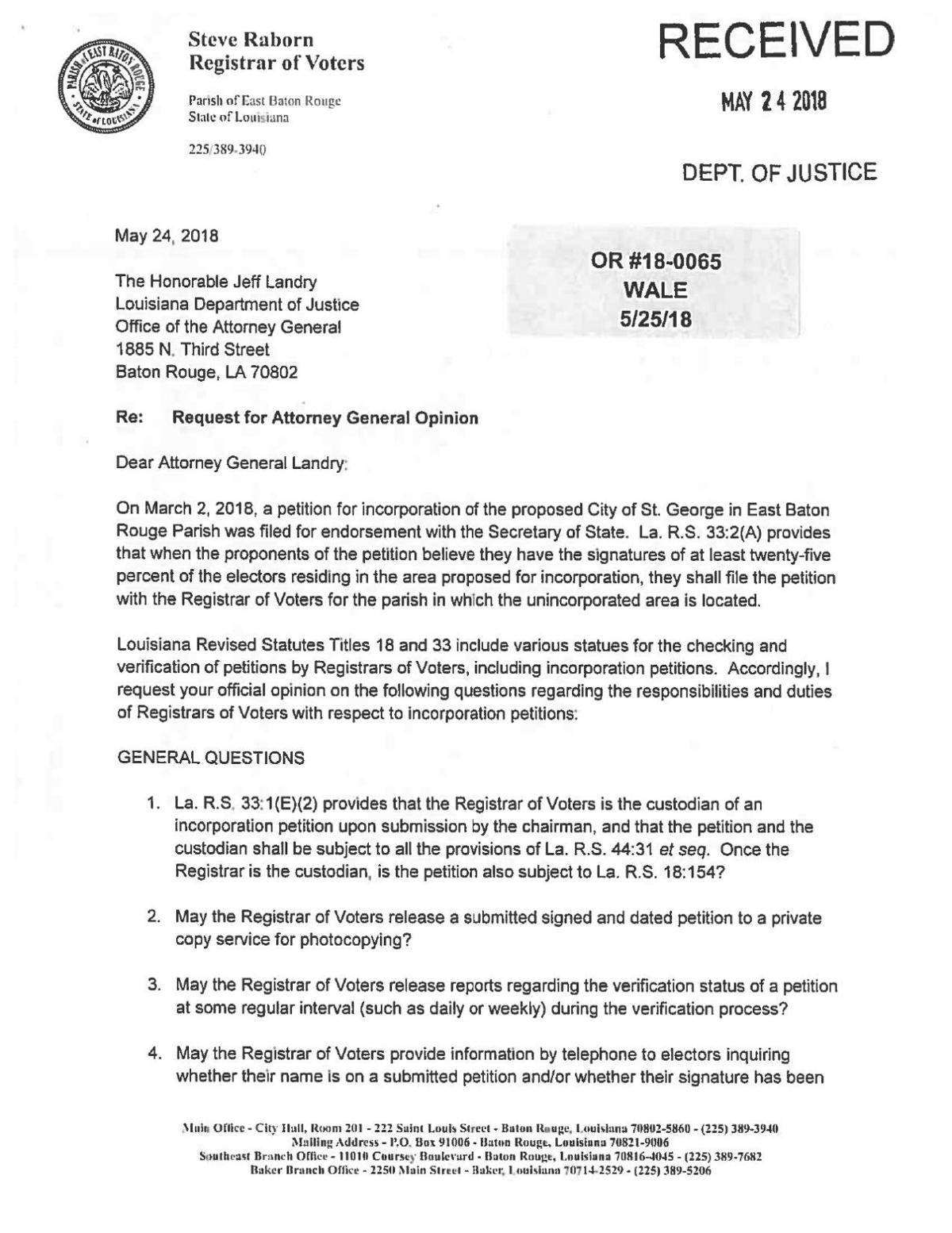 The Registrar’s office was thrust into an unusually public light during the previous, unsuccessful petition campaign. Raborn, who took over as registrar during the tail end of that process, announced in 2015 that the past St. George campaign fell 71 signatures short of being placed on ballots.

Both sides of the debate in 2015 questioned the registrar’s methods. St. George organizers filed a lawsuit arguing the registrar made substantive errors during the verification process; a state judge dismissed the lawsuit. St. George opponents known as Better Together released an analysis that said more than 200 signatures the Registrar’s office had accepted as valid were not, based on voter registration records.

Raborn’s list of questions for Attorney General Jeff Landry asks for guidance on how to interpret various state laws, some of which have changed since the previous St. George petition. Landry’s spokeswoman, Ruth Wisher, confirmed Wednesday that their office received Raborn’s request, but said she could not comment further.

St. George organizers did not respond to a request for comment.

A month after announcing the return of their campaign to create a new city in the southeastern swath of East Baton Rouge, St. George organizer…

Many of Raborn’s questions pertain to attempts to add, change or remove names from the petition after his office receives it. One was whether his office could change the status of a signature from valid to invalid, or vice versa, based on information from a third party that challenges his office’s original determination.

M.E. Cormier, an organizer of Better Together, said Wednesday it is an especially important question in light of her group finding signatures last time from people who were not eligible voters.

“We appreciate that the registrar is doing his due diligence in vetting this new petition under new laws, and we respect the process,” Cormier said.

Raborn asked Landry for guidance on voter registration as well, particularly whether there is a cutoff date for someone to register to vote within the proposed boundaries, and whether the validity of a signature could change if their voter registration changes. He asked what to do if someone who signed the petition says his office erred in either accepting or rejecting their signature as valid. And he questioned whether his office could tell people over the phone whether certain signatures had been accepted or rejected during the verification process.

One question references petition fraud, which was problematic in 2015, when a number of people said their signatures on the petition had been forged. Raborn requested guidance on what his office should do if someone says another person signed their name on the petition. And he wants to know if his office is responsible for verifying witnesses as well.

For those who want to add or remove their names, Raborn wants to know if they could make those requests outside of business hours and whether his office could provide forms for people to do so.

The Baton Rouge Area Chamber board has voted to formally oppose the incorporation of the proposed city of St. George.

A few questions relate to the many public records requests Raborn expects to receive for the petition. Though the petition is a public record, the registrar’s office follows a law that says people must submit a petition with 25 signatures to obtain documents from the registrar. He asked the attorney general to clarify whether that rule need apply for those requesting the St. George petition as well, and asked if his office could release a copy of the petition to a private company to make copies.

Raborn asked whether his office could release regular reports during the verification process to update the public. And he asked who becomes the custodian of the petition if his office verifies it to have the required 25 percent of voter signatures.

He also asked if there’s a deadline for how long his office could take to verify the petition, and whether it would be possible to use outside employees from the Secretary of State’s office or other parish registrars to help with the verification. Raborn said he’s not concerned about whether his office has the manpower to verify the petition, but they have already received offers from other offices to loan employees to help and they are considering it.

Mayor-President Sharon Weston Broome says taxes would have to increase to make the proposed city of St. George viable, as her administration a…

Organizers for the proposed city of St. George took aim Monday at the city-parish's library system, pension costs and schools as they painted …