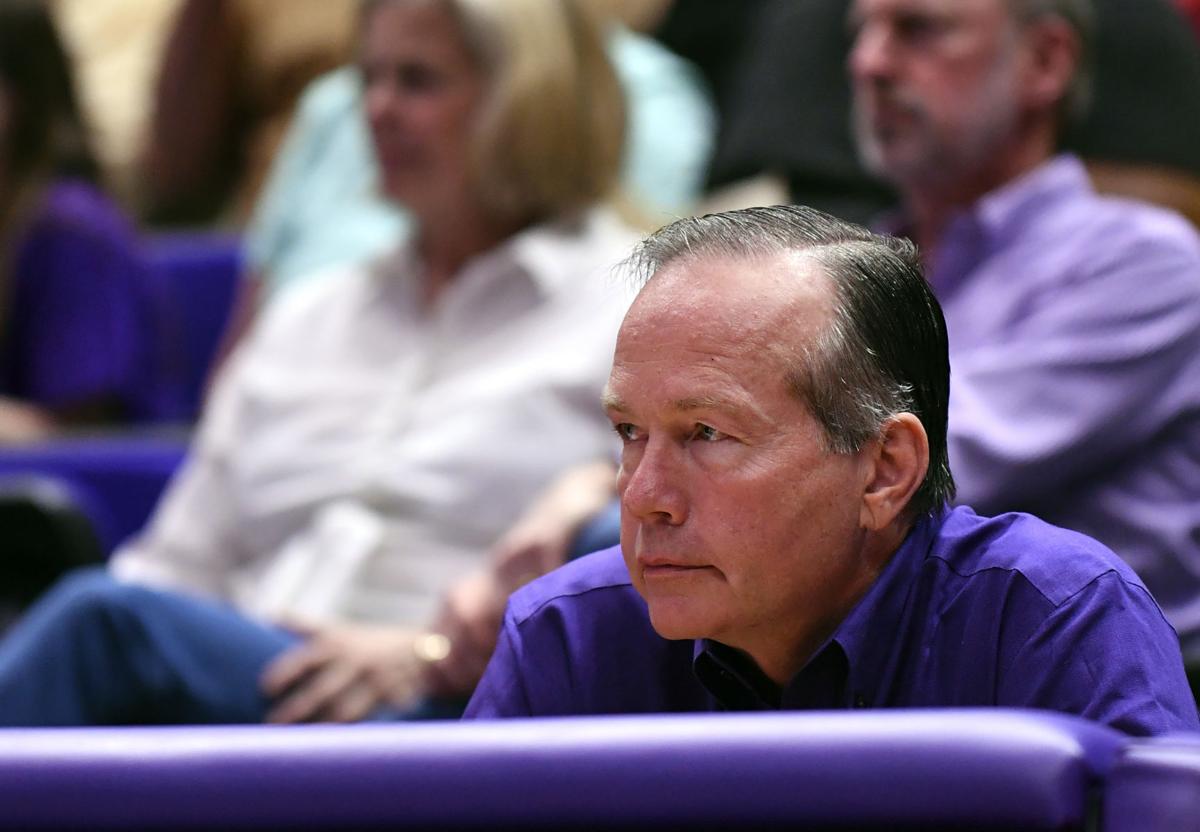 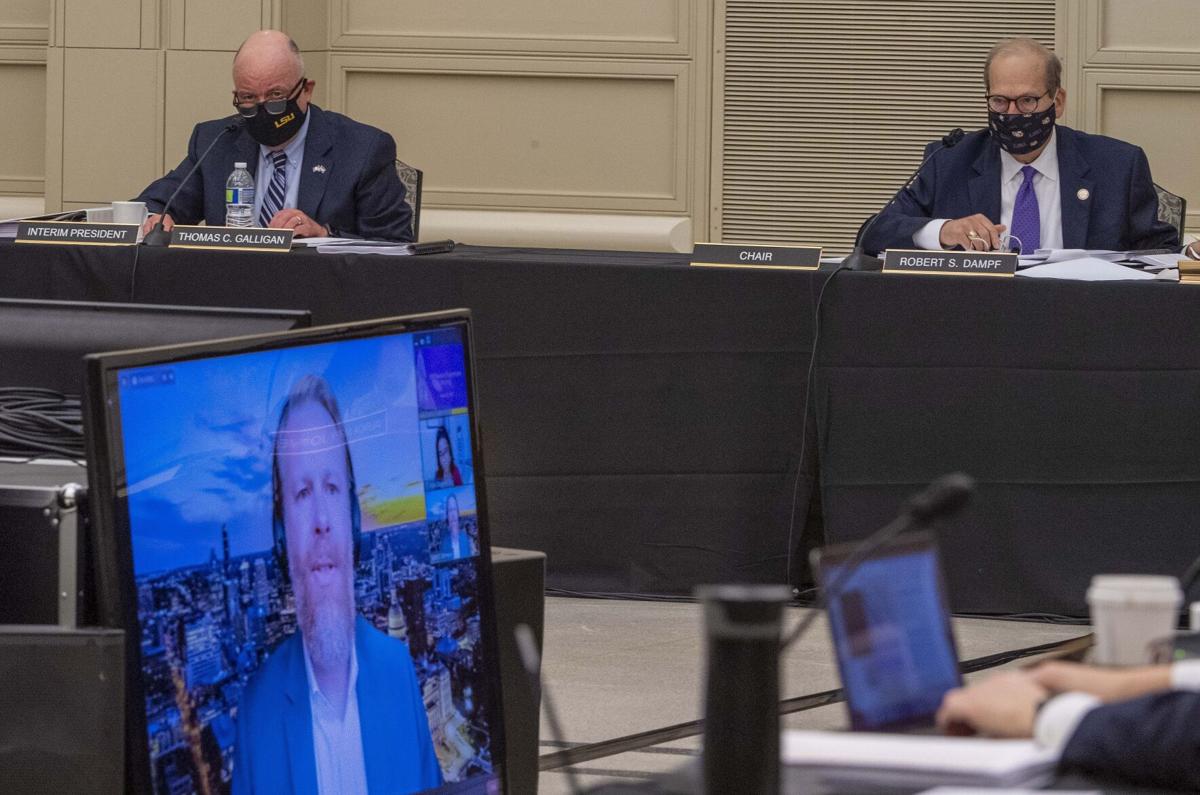 LSU Interim President Tom Galligan and LSU Board Chairman Robert Dampf and LSU board members listen to attorney Scott Schneider, via Zoom, as LSU releases their Husch Blackwell report on sexual assault/misconduct cases at their Board of Supervisors meeting Friday March 5, 2021, in Baton Rouge, La.

LSU Interim President Tom Galligan and LSU Board Chairman Robert Dampf and LSU board members listen to attorney Scott Schneider, via Zoom, as LSU releases their Husch Blackwell report on sexual assault/misconduct cases at their Board of Supervisors meeting Friday March 5, 2021, in Baton Rouge, La.

The chairman of the LSU Board of Supervisors on Monday blasted former LSU President F. King Alexander in a letter to officials at Oregon State University, where Alexander is now the embattled president.

The letter from Robert Dampf to OSU's board came as Alexander faces the possibility of losing his job at Oregon State over his missteps as president of Louisiana's flagship university. 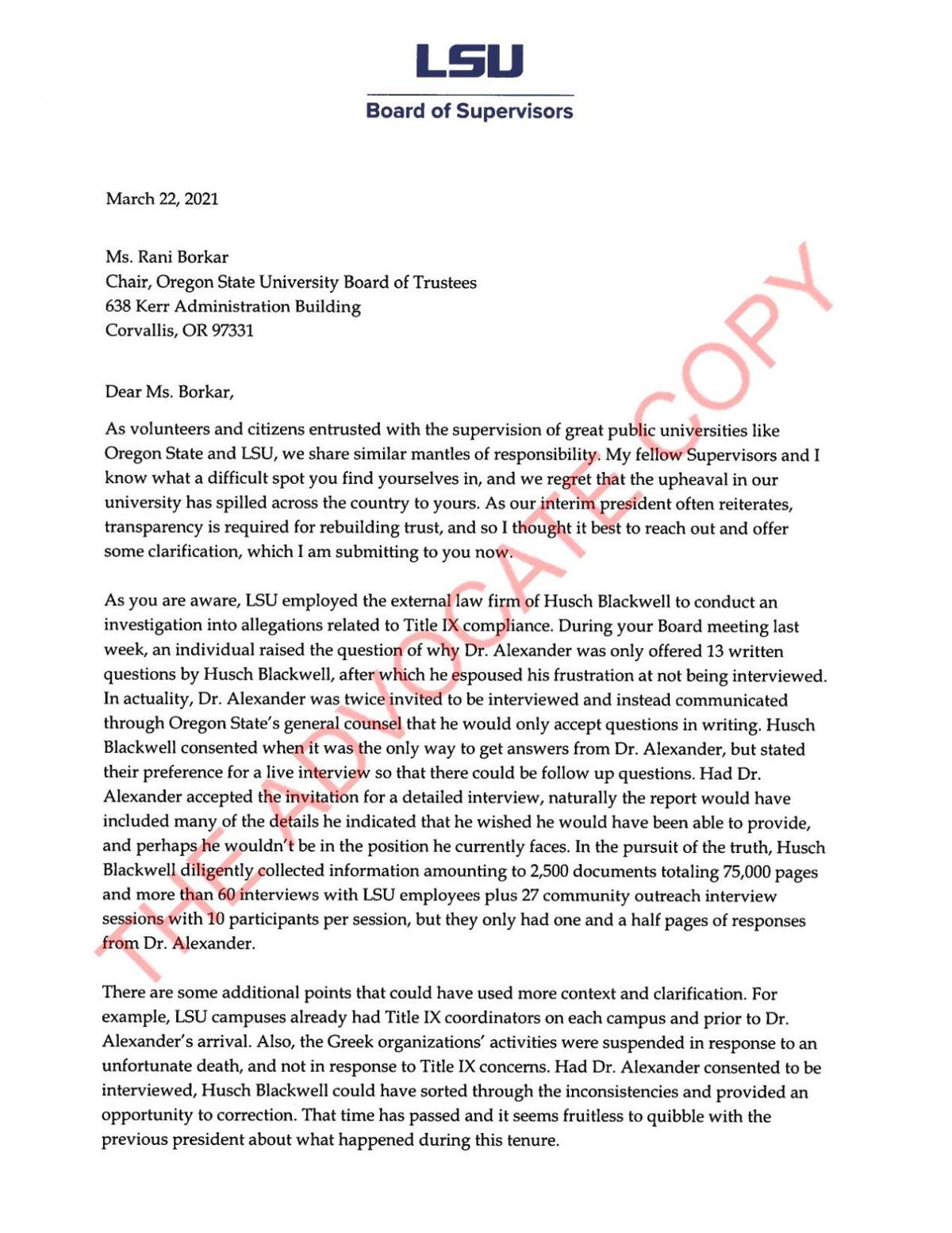 Earlier this month, LSU released a report from the law firm Husch Blackwell that described a "total failure of leadership" in the way LSU responded to cases of sexual misconduct, largely under Alexander's tenure. Last week, the OSU Board of Trustees voted  to place Alexander on probation amid the controversy; the group has called another meeting for Tuesday.

In last week's meeting, Alexander offered pointed criticism of LSU and the 16-member Board of Supervisors, a panel he said often interferes in athletics matters, unlike the board at OSU. Alexander said OSU is much more balanced in its approach between athletics and academics.

"I feel confident that I can speak not only on behalf of my university, but also for my state in saying that I am beyond offended by Dr. Alexander's arrogant and condescending comments about Louisiana's culture, our state and our university," Dampf wrote in his letter to Oregon State. "When sharing his opinion that Louisiana has a different moral standard than Oregon, he omits the fact that he enthusiastically counted himself as one of us for almost seven years."

Dampf's three-page letter offers the most pointed criticism of Alexander's comments that anyone on the LSU board has offered to date about the sexual assault scandal rocking the university that Gov. John Bel Edwards appointed them to oversee. Board members have been reticent to say much publicly about the Husch Blackwell review, except in a March 5 meeting when they received the Husch Blackwell report and discussed some of its contents.

The LSU board is often secretive in its operations — in 2013, for instance, members helped bury a sexual harassment investigation into former LSU head football coach Les Miles — but Dampf wrote that he was offering the letter because "transparency is required for rebuilding trust."

Less than a week after placing F. King Alexander on 10 weeks of probation, the Oregon State University Board of Trustees plans to meet again T…

Dampf addressed his letter to OSU board of trustees chair Rani Borkar, telling her that he wanted to set the record straight about some of Alexander's comments. Among other things, Dampf sought to rebut Alexander's complaints about not being interviewed by Husch Blackwell as part of the firm's review. Alexander told the OSU board that he was only offered 13 written questions to respond to from Husch Blackwell.

But Dampf wrote that Alexander was "twice invited to be interviewed and instead communicated through Oregon State's general counsel that he would only accept questions in writing."

"Had Dr. Alexander accepted the invitation for a detailed interview, naturally the report would have included many of the details he indicated that he wished he would have been able to provide, and perhaps he wouldn't be in the position he currently faces," Dampf wrote.

Oregon Gov. Kate Brown said Thursday that she expects Oregon State University's Board of Trustees to “take decisive action to remove" its pres…

Dampf disagreed with Alexander attributing a shutdown of LSU Greek Life to Title IX issues, saying it instead happened "in response to an unfortunate death."

The family of Max Gruver, who died after a night of hazing at his LSU fraternity in 2017, is pursuing Title IX claims against LSU, though. Their argument in a federal lawsuit is that LSU discriminates against male students through the unique dangers of the fraternity system, while female students are at lower risk in sororities.

Dampf also wrote about "inter-institutional accountability" in the wake of the Husch Blackwell report.

"Perhaps in the past, an administrator or coach could leave a university and feel comfortable in the knowledge that any mistakes at a prior university would remain there in secret," he wrote.

But Dampf took the opportunity to defend LSU's decision-making in response to the Husch Blackwell report, which has consisted so far of two short-term suspensions for athletic department officials. Other universities have taken stronger action against former LSU employees implicated in the report. Miles, for instance, lost his job at Kansas over sexual harassment allegations that recently came to light in the review, while Alexander is fighting to keep his post.

"The fact that we cannot ensure accountability for people who have left the university, and many have, has caused more local forces to demand the entirety of the justice fall onto just a few people," Dampf wrote. "This form of scapegoating is not justice."

The OSU meeting over Alexander starts at 10:30 a.m. Central time on Tuesday, and people can livestream it online.

Far from the benighted bayous of a reactionary state ignorant enough to pay him $600,000 a year to run LSU, F. King Alexander has had an epiphany.