LSU has agreed to pay Husch Blackwell up to $100,000 for the law firm’s review of how the university has handled past sexual violence and assault cases on campus.

The contract, which the university released on Friday to The Advocate, says Husch Blackwell will review whether the university’s handling of past sexual harassment cases complied with the federal Title IX law, which prohibits universities from discriminating on the basis of gender. 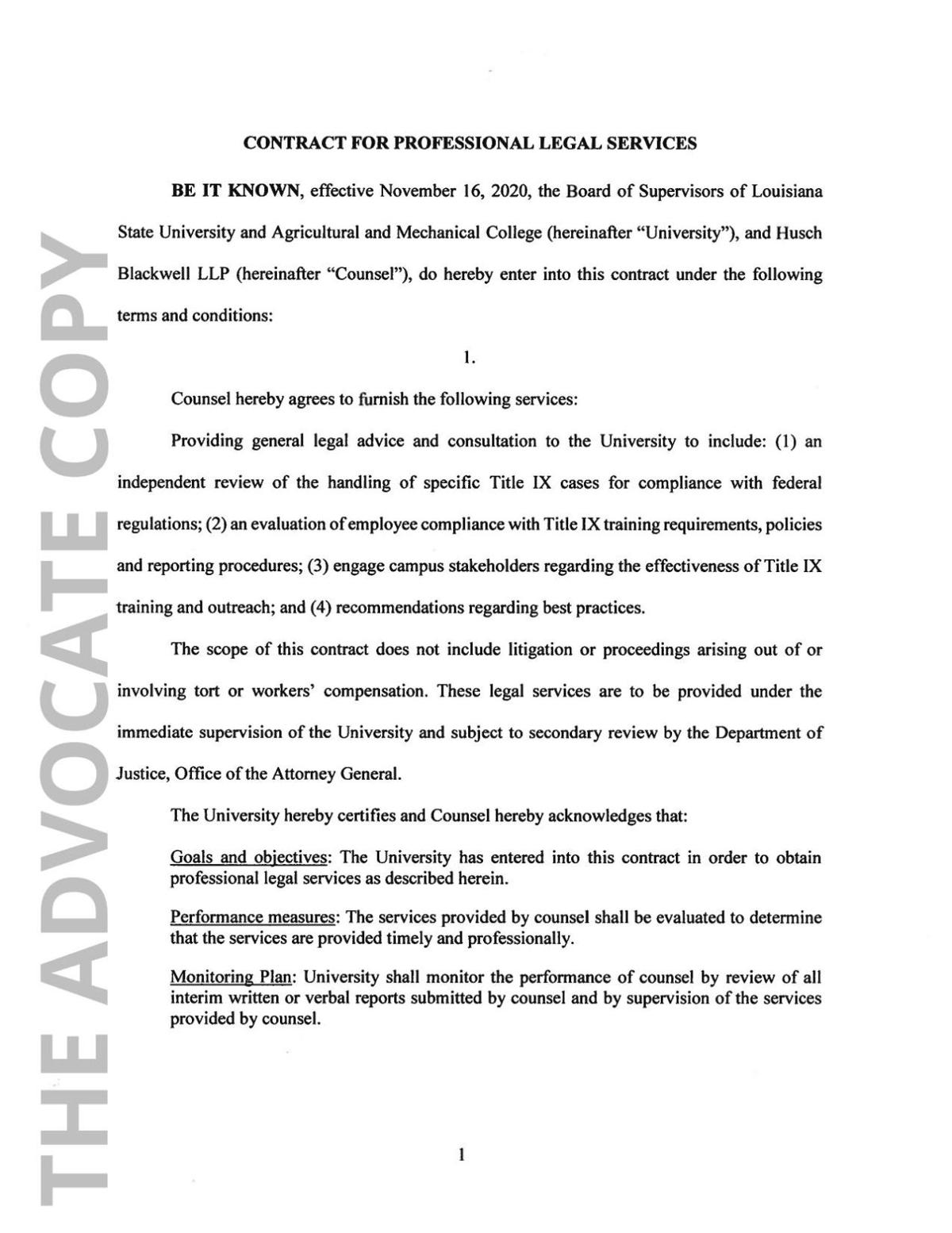 LSU Interim President Tom Galligan said Friday at an LSU Board of Supervisors meeting that the firm’s review should conclude and be made public by February. He said that, despite calls on campus for LSU to take immediate action against officials who have been implicated in a sexual assault and domestic violence  scandal first published by USA Today, he will not take any drastic action until Husch Blackwell concludes its review.

The contract between LSU and Husch Blackwell specifies that other investigators should have access to the firm's review. Among those written into the contract: the U.S. Department of Justice, the Attorney General, the Louisiana Legislative Auditor and the state Inspector General.

Galligan and the Husch Blackwell attorneys performing the Title IX review signed off on the contract on Wednesday. The document shows varying pay ranges for each attorney working on the review.

Scott Schneider, the attorney leading the review, will be paid $425 an hour, according to the contract. Other attorneys will be paid $385 an hour and $355 an hour, with a paralegal earning $145.

Schneider, who is based in Austin, Texas, also spoke to the LSU board on Friday. Schneider is intimately familiar with Louisiana — he used to practice law in Louisiana, teach at Tulane University and sit on the Louisiana Ethics Board.

James Robinson, chair of the LSU Eunice faculty senate, told the board Friday that faculty members are “extremely concerned” about what LSU is doing to resolve the allegations.

He said that one of those concerns included the “continued presence” of certain high-level administrators in their current positions at LSU, including one, Verge Ausberry, who continues to serve on the LSU presidential search committee. The board has, so far, opted against removing Ausberry, the executive deputy director of athletics, from his role on the search committee, despite Ausberry’s recent admission that he did not follow up on a football player’s text message that he hit his girlfriend after the player recanted his confession.

Members of the Board of Supervisors themselves did not address the controversies until their two-and-a-half-hour meeting nearly adjourned. At the end, chairman Robert Dampf read out a statement that supported waiting until the Husch Blackwell review concluded for LSU to take major action.

“It will take some time for them to work through the facts,” Dampf said. “If errors were made, we want them fixed. If any members of our university community failed to fulfill their responsibilities, they will be held appropriately accountable.”