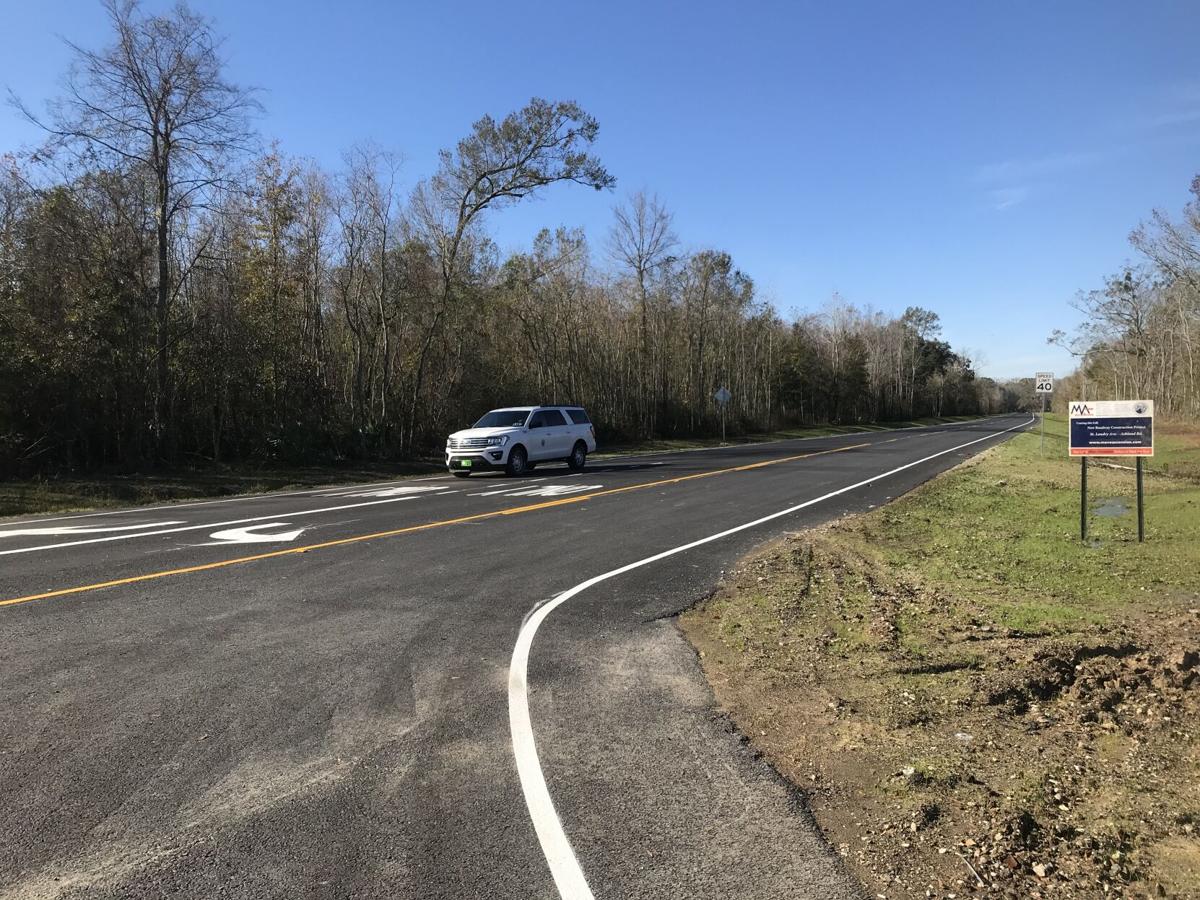 A sport utility vehicle passes on the Ashland-St. Landry connector road southwest of Gonzales and near the Lamar-Dixon Expo Center. Envisioned at least since 2014, the connector road, which has recently been completed, is seen as one way to alleviate traffic from plant workers along congested La. 30 in Ascension Parish. 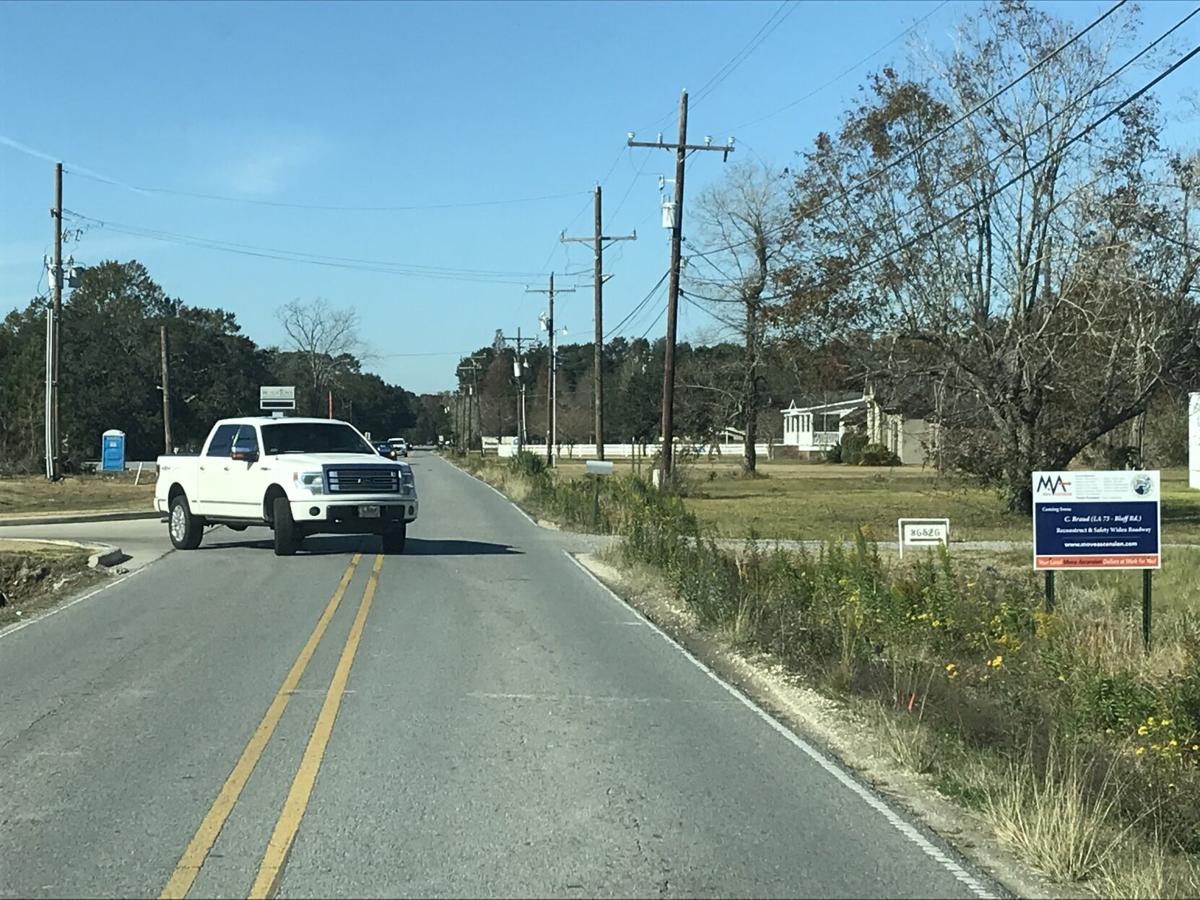 A sport utility vehicles makes a turn onto C. Braud Road in the Prairieville area of Ascension Parish. An important connector road between the congested La. 73 area near Interstate 10 and Bluff Road, narrow C. Braud is slated for a safety widening project. The $2.3 million construction bid has already been approved. 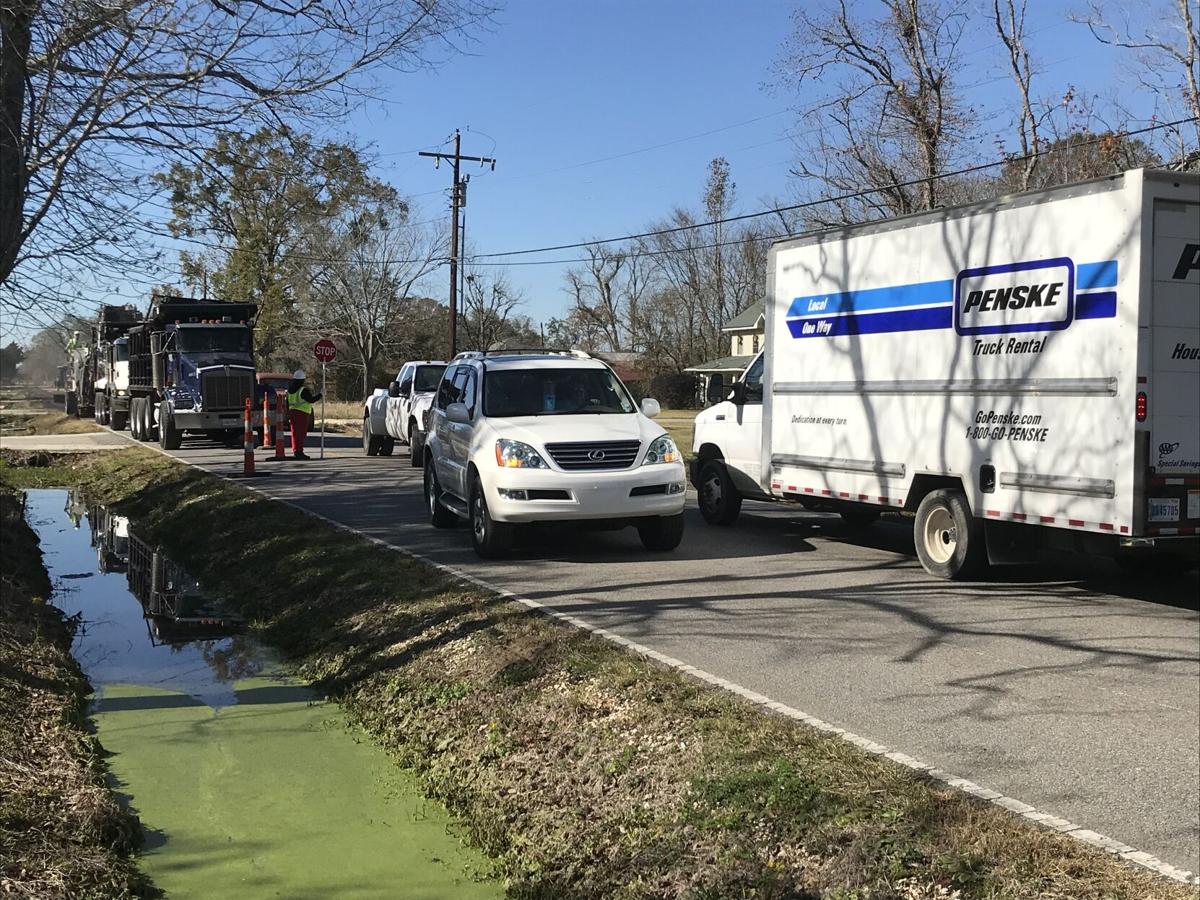 Traffic is delayed and diverted on Germany Road in Ascension Parish for road overlay work on Dec. 21. The Move Ascension program has proposed several additional upgrades to this growing area between Airline Highway and La. 44 north of Gonzales, including a safety widening project and a roundabout at Braud Road.

A sport utility vehicle passes on the Ashland-St. Landry connector road southwest of Gonzales and near the Lamar-Dixon Expo Center. Envisioned at least since 2014, the connector road, which has recently been completed, is seen as one way to alleviate traffic from plant workers along congested La. 30 in Ascension Parish.

A sport utility vehicles makes a turn onto C. Braud Road in the Prairieville area of Ascension Parish. An important connector road between the congested La. 73 area near Interstate 10 and Bluff Road, narrow C. Braud is slated for a safety widening project. The $2.3 million construction bid has already been approved.

Traffic is delayed and diverted on Germany Road in Ascension Parish for road overlay work on Dec. 21. The Move Ascension program has proposed several additional upgrades to this growing area between Airline Highway and La. 44 north of Gonzales, including a safety widening project and a roundabout at Braud Road.

Some time early this year, contractors are expected to start a combined $3.7 million in road construction, building the first Ascension Parish-funded roundabout in the parish's history and widening a notoriously narrow outlet for congested La. 73 traffic near Prairieville.

Meanwhile, the entirely new St. Landry-Ashland road connector near Gonzales, which is expected to be the final link in a long-awaited alternative route to Mississippi River chemical plants, is largely finished. So are a series of turn lanes on La. 73 in the Oak Grove area of northern Ascension and a new bridge on Babin Road, parish officials said.

All of those projects are part of the more than $70 million Move Ascension program that has been slowly churning through a list of 34 road improvements and light synchronizations for the past several years, a parish listing shows.

The program has finished six projects in all through the coronavirus pandemic in 2020 and, by the summer of 2021, parish officials said they expect to have seven to 10 projects under construction or headed to construction.

These projects come in addition to the separate $29 million state construction project to widen more than three miles of La. 42 in Prairieville, which is rounding toward completion after more than seven years of sewer and road construction.

State highway contractors also are replacing bridges on Airline Highway at Bayou Manchac at the parish line and farther south near Gonzales.

The Move Ascension program is a first of its kind for parish government, which hadn't previously built new roads in decades but focused on road overlay programs that did little to address capacity problems in the fast-growing parish.

Coming off parish voters' resounding rejection of a half-cent sales tax for the "Lanes for Change" road program in 2012 and subsequent rejections of other tax measures, parish leaders then vowed to find ways to finance road construction without a new parishwide tax.

Under the administration of former Parish President Kenny Matassa and the Parish Council at the time, road impact fees on new homes and businesses, road maintenance property tax districts for new, individual subdivisions, and tighter traffic impact analyses were outgrowths of that vow. So was the Move Ascension program.

The road program has amassed more than $70 million by cobbling together funds from a $25 million bond issue in 2016, $10 million in sales tax surplus, impact fee revenues, federal and regional road matching dollars, state road swap money in Prairieville and other sources, parish officials have said.

Move Ascension has been focused on generating the kind of traffic-easing and safety improvements that parish officials had long sought through grants and the state highway department, officials said.

Mike Enlow, a parish engineer who led the early development of the Move Ascension program, and other parish officials have pointed out that the program has focused, in part, on corridors, such as the critical north-south route along Roddy Road and the east-west route on Germany and Duplessis roads north of Gonzales.

Both are slated for lane widenings of narrow roads to improve safety, though not add capacity, and a string of future roundabouts for traffic flow and safety.

The program, however, doesn't have the money for major capacity additions, like adding new lanes, in a parish that was estimated in 2019 to need $1.25 billion in road improvements over the next 20 years.

Enlow suggested that the parish must balance getting traffic moving more efficiently before creating costly capacity expansions that would simply dump traffic into other bottlenecks.

But creating the program from scratch required hiring engineering firm HNTB and a collection of subcontracted design firms, selecting projects and spending millions on designing them, buying land and moving utilities, which meant Move Ascension moved slowly through the Matassa years.

The program and its millions in engineering and other costs — with little in the way of construction at that point — were a campaign point in 2019 for a batch of new councilmen elected to office that year, along with the new administration of current Parish President Clint Cointment.

Beginning in second-quarter 2020 and now this year, those years of behind-the-scenes efforts have begun to bear fruit on the roads.

"So, we had to stand up a program from nothing and, you know, that takes time," said Jeff Burst, a senior project manager with HNTB and a lead consultant for the Move Ascension program.

Burst and several parish officials who have worked closely with the program since the Matassa administration have pointed out that the three years it has taken to see construction start on Move Ascension more than halves the time it takes the state to complete a project from start to finish.

The first two of the next 10 projects headed toward construction this year are the $2.4 million project to widen existing lanes on narrow C. Braud Road, an important link between La. 73 near Interstate 10 and Bluff Road, and a $1.34 million roundabout at Henry Road and La. 930 in Prairieville, parish officials said.

Though the state Department of Transportation and Development and developers have built roundabouts in Port Vincent, Sorrento and Burnside, the Henry/La. 930 roundabout would be parish government's first after more than a decade of discussions and design for various intersections.

Councilman Michael Mason, a first-term member who was critical of the parish's engineering spending on Move Ascension during the campaign, has taken an interest in oversight of the road program and said his view of the program has changed.

"When you get a little bit more information and you start to see how the big plan starts to unfold, you kind of see what the importance is. It's all about the flow of traffic," he said.

Mason explained that his constituents are tuned into Move Ascension projects for their area and so seem to be supportive of what is planned. He noted that some aired worries late last fall that a Move Ascension roundabout for Germany and Braud roads had been canceled when a temporary traffic light was put up by a developer.

Mason said the roundabout is still planned as one of nine proposed in Move Ascension. The state transportation department is planning others as well.

In years past, new parish administrations and Parish Councils have sometimes tabled the road and drainage priorities of the prior leadership, often leaving fallow taxpayer-funded engineering work with little to show for the expense.

With few exceptions, the Cointment administration has largely allowed Move Ascension — and the several million dollars spent standing up the program — to proceed.

One exception has been the costly and controversial safety widening proposed for Tiggy Duplessis Road in the Duplessis area, despite strong traffic data indications of safety concerns. The parish is taking other safety measures but won't widen the road, the primary point of contention.

"Traffic, drainage and growth, that's what he ran on and, I think, he recognized that Move Ascension was already in place, already moving forward and is one of those things, if you have something in there that is working, you work with it," McConnell said.

Move Ascension moving along: Here's the status of many of the roadway projects

GONZALES — Perhaps a decade from now, 18-wheelers headed to Ascension Parish's industrial corridor will use a new Interstate 10 interchange an…