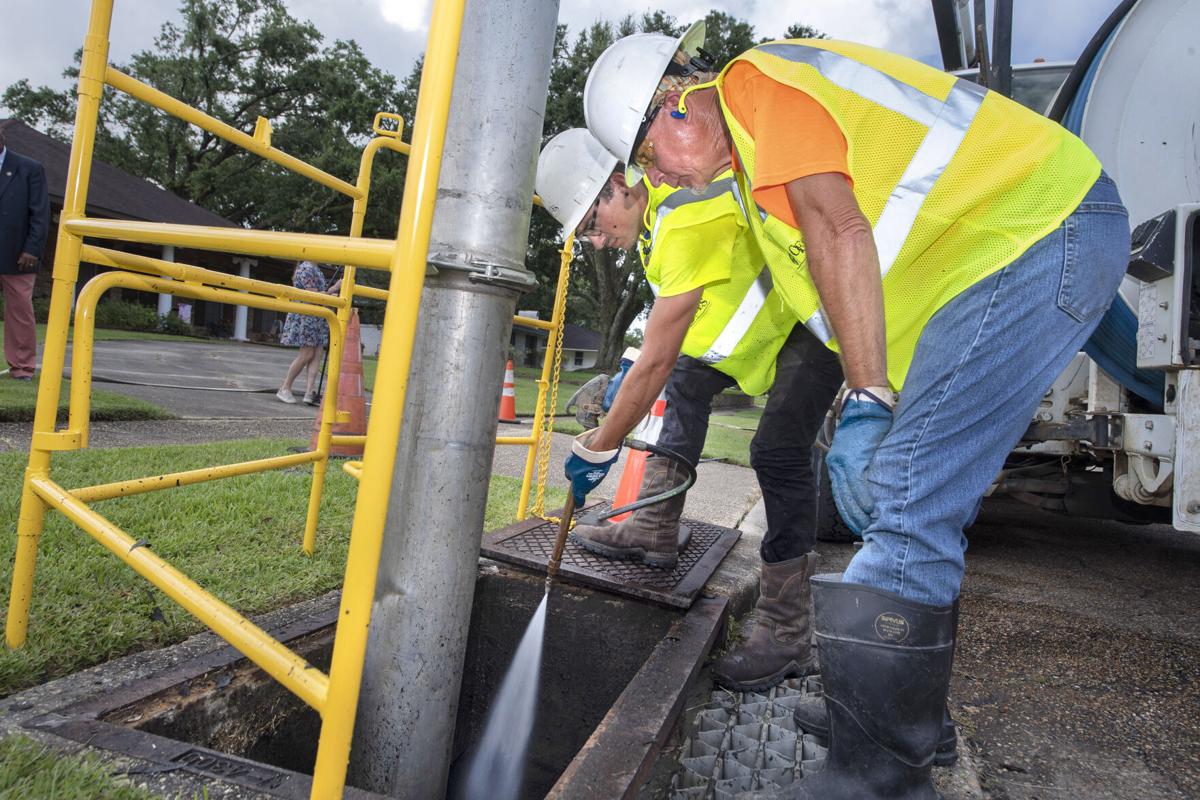 From left, Chris Thompson and Steve Lacombe, crew members with the Baton Rouge office of city-parish contractor Compliance EnviroSystems, use a vacuum truck and high pressure spray to start the cleanout of a storm drain via a catch basin at the intersection of Jefferson Highway and Chelsea Drive, Thursday, June 24, 2021. It's near the entrance to the Westminster/Pine Park subdivision, one of the areas of Baton Rouge where residents' homes were flooded by the catastrophic rain of May 17, 2021. On Wednesday, the Metro Council approved $20 million for drainage projects like this to begin right away. The initiative includes work on channel clearing and grubbing, roadside drainage cave-ins, roadside ditch cleaning, lined canal panel repairs and engineering/project management. 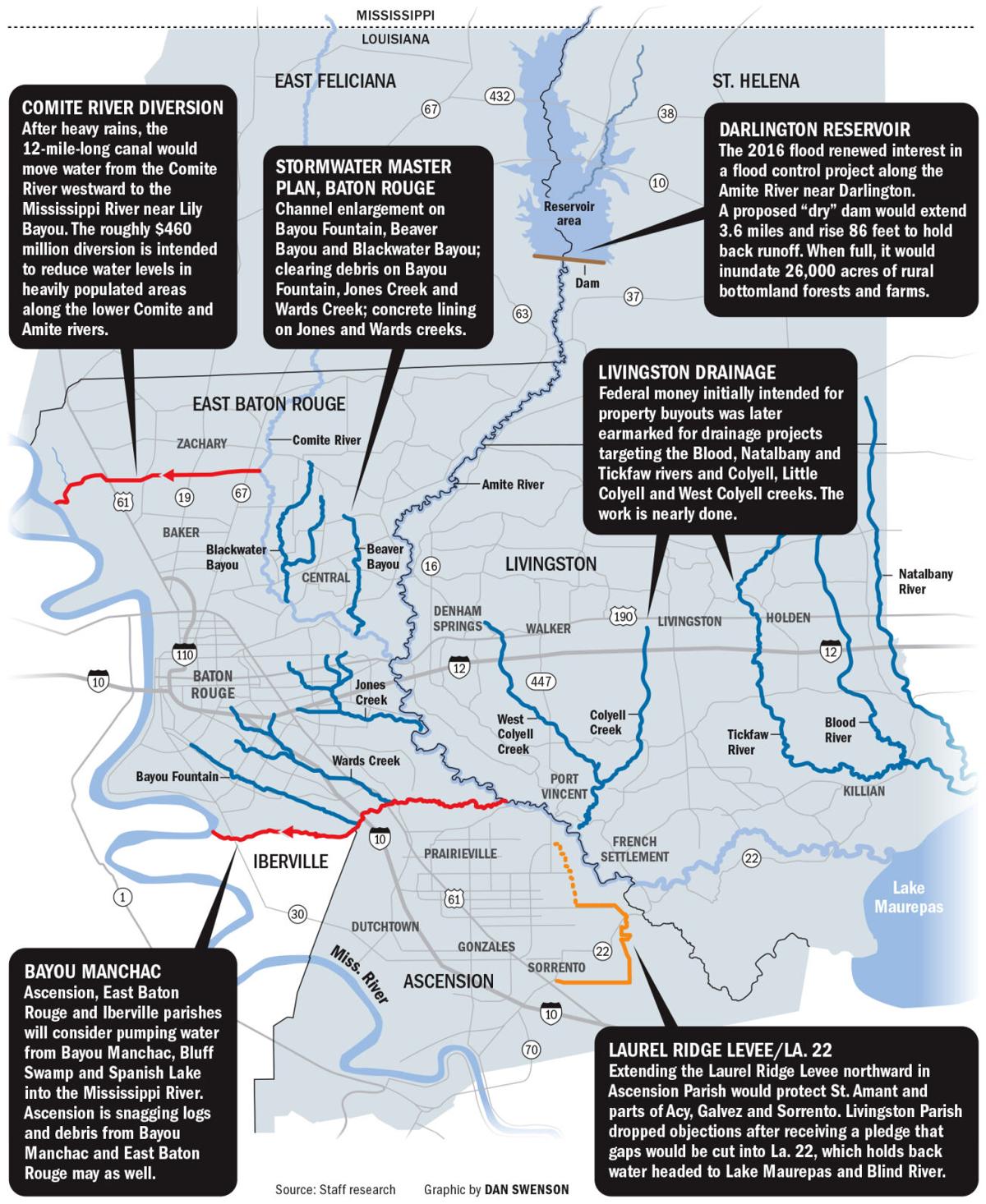 Area flood control projects: Even before 2016’s disaster across the Baton Rouge area, parishes have sought ways to improve drainage and limit flooding. Here’s a brief look at ideas floated or underway.

From left, Chris Thompson and Steve Lacombe, crew members with the Baton Rouge office of city-parish contractor Compliance EnviroSystems, use a vacuum truck and high pressure spray to start the cleanout of a storm drain via a catch basin at the intersection of Jefferson Highway and Chelsea Drive, Thursday, June 24, 2021. It's near the entrance to the Westminster/Pine Park subdivision, one of the areas of Baton Rouge where residents' homes were flooded by the catastrophic rain of May 17, 2021. On Wednesday, the Metro Council approved $20 million for drainage projects like this to begin right away. The initiative includes work on channel clearing and grubbing, roadside drainage cave-ins, roadside ditch cleaning, lined canal panel repairs and engineering/project management.

Area flood control projects: Even before 2016’s disaster across the Baton Rouge area, parishes have sought ways to improve drainage and limit flooding. Here’s a brief look at ideas floated or underway.

After a failed attempt to shift funding from libraries and mosquito control to flood prevention, East Baton Rouge officials say almost no option is off the table.

Millions of dollars from federal stimulus bills are being used to address a backlog in drainage maintenance requests. But the officials say that money is just a one-time fix and that they need to find a reliable revenue stream to prevent the backlog from building up again.

Further tinkering with the budget, a new tax or utility fee dedicated to stormwater management have been floated as potential solutions by local leaders as they figure out how to lessen risk of future floods like the ones that devastated parts of the parish in recent years.

Since rainfall inundated parts of the parish in May, talk of flood prevention has consumed much of the city-parish. Local leaders have hosted townhalls with constituents to discuss possible solutions and Mayor-President Sharon Weston Broome’s administration has announced new projects and worked behind the scenes through its Stormwater Master Plan to identify fixes for areas of the parish that are most at risk of flooding.

The areas at risk of flooding are “pretty much all over the watershed,” Kennedy said, specifically pointing to the Ward and Jones creeks, Claycut Bayou and Bayou Fountain areas.

The master plan is being used to analyze those risks, find potential solutions and implement the solutions in a way that will cost the least amount while preventing the most damage, Kennedy said.

A flooding Wards Creek wrecked people's lives. Here's what Baton Rouge is doing about it.

Brenda Boyd is living in a house with no flooring and almost no furniture — and the bottom half of the walls is missing.

While the recent spending on flood protection — such as $20 million from the American Rescue Plan that went toward drainage — is a good start, Kennedy said, the parish will have to find a way to reliably fund future work.

“Part of it is going to be what is the parish willing to bear?” Kennedy said.

That’s where Broome and the Metro Council come in.

District 9 Councilman Dwight Hudson proposed a special election to ask voters to reallocate $5.7 million from the parish Library System and Mosquito Abatement and Rodent Control. Following pushback during the July 28 council meeting, the proposal was ultimately voted down.

An attempt to take money from Baton Rouge libraries to pay for flood protection has come to a screeching halt.

Broome didn’t initially weigh in on Hudson’s attempts to snatch funds from libraries and MARC. But after the proposal failed, she released a statement insinuating her administration could find another way to bankroll drainage projects without tampering with departments funded by voter-approved property taxes.

She doubled down on that statement recently, claiming her administration is already tackling the issue on several fronts. One idea, she asserts, will generate more annual revenue down the line than what Hudson was proposing through his efforts.

“We’re not short of ideas over here in this administration,” Broome said. “I’ve already demonstrated, as mayor-president, my commitment to drainage. We did that with the $20 million in American Rescue Plan funds we committed to drainage maintenance already.”

Broome said she intends to use a third of the additional windfall from federal stimulus money to fund drainage maintenance through the 2022-23 budget cycles – that could be approximately $35 million.

Her administration is also exploring other possibilities to beef up the city-parish drainage budget for the long-term, a plan she hopes to unveil before the end of the year.

“We’re exploring an independent, non-taxing opportunity that would not only be applicable to drainage, but other issues of city-parish government,” she said. “It would need Metro Council approval.”

Following his failed attempt to rededicate certain property taxes to drainage maintenance, Hudson asked the administration for a comprehensive report on how the city-parish intends to address the ongoing flooding crisis in East Baton Rouge. That report should be presented to the council Oct. 13.

Hudson is expecting the mayor’s office to specifically outline how the city-parish will catch up on a three-year backlog of drainage service requests and give details on how to sustain the program going forward.

He asked that the report include an estimate of annual revenue required to fully fund the drainage maintenance department, what ideas are being explored or supported by the administration to supply such funding and a full accounting of future American Rescue Plan dollars that will be allocated to drainage maintenance or capital projects.

“I think we need to keep all options on the table at this point,” Hudson said. “I’m worried that we’ll just look at proposing another property tax, get it on the ballot and try to move forward. And I’m not sure that’s the way to do it.”

Advocates with the Louisiana Stormwater Coalition, a local volunteer group that advocates for permanently funding the Baton Rouge stormwater system, have been pushing officials to establish a stormwater utility paid for through a monthly utility fee, much like garbage collection and sewage.

During the public debate over Hudson’s proposal, Marie Constantin, who helped found the coalition, saw an opportunity to introduce many of the council members to the concept of a stormwater utility district. Such districts are widespread throughout much of the country but don't exist in Louisiana, according to a study by Western Kentucky University.

Establishing a utility district through an additional utility fee — rather than a new tax — would create a department with a dedicated director and stormwater management experts. It would also secure enough funding to buy equipment that can reduce the need for future maintenance by capturing litter and sediment that fill ditches, storm drains and other waterways.

Broome doesn’t appear all that interested in the idea of a stormwater utility district, but said she wouldn’t stand in the way of citizens wanting to initiate their own independent taxing districts, akin to the crime prevention districts certain neighborhoods in the parish have created.

But Hudson said he wasn’t closed off to the idea.

“I’d rather explore a stormwater utility district or us looking somewhere else in the budget to keep the tax burden as low as possible,” Hudson said.

Many of his colleagues echoed his calls to find a solution but keep taxes low.

“I’m anxious to see what the mayor comes up with,” said Councilman Brandon Noel. “I’d like to see the potential in privatizing it in some fashion. I’m open to looking at any way to fund it that doesn’t increase taxes.”

“I trust the mayor’s office and their plan as far as what they may have in the works,” Racca said. “They have a team of engineers working, they have a lot of data that they’ve invested in, so I am 100% on board with getting that information, seeing what that looks like and putting it to work with the dollars we have.”

But Racca said she was unwilling to support any sort of new tax or fee because of the economic hardships faced by many of the parish’s residents throughout the pandemic.

Councilwoman Carolyn Coleman wasn’t too turned off by the idea of a new dedicated tax for drainage maintenance, but said it would take a carefully thought out plan similar to what the mayor-president brainstormed for her MovEBR roads improvement sales tax, to win voter support.

Adams and Gaudet both said they were unlikely to support a new tax but are willing to listen to the proposals that come before them.

“The only way we’re going to do what needs to be done and take care of this entire city-parish and the maintenance in this entire city-parish is by doing things differently,” Adams said. “So we’re going to have to have hard conversations amongst ourselves on the council, the administration itself and hard conversations with the voters in the parish.”

Baton Rouge saw more rain by mid-August than it typically sees in a whole year. And with four months left to go, 2021 is shaping up to be one …