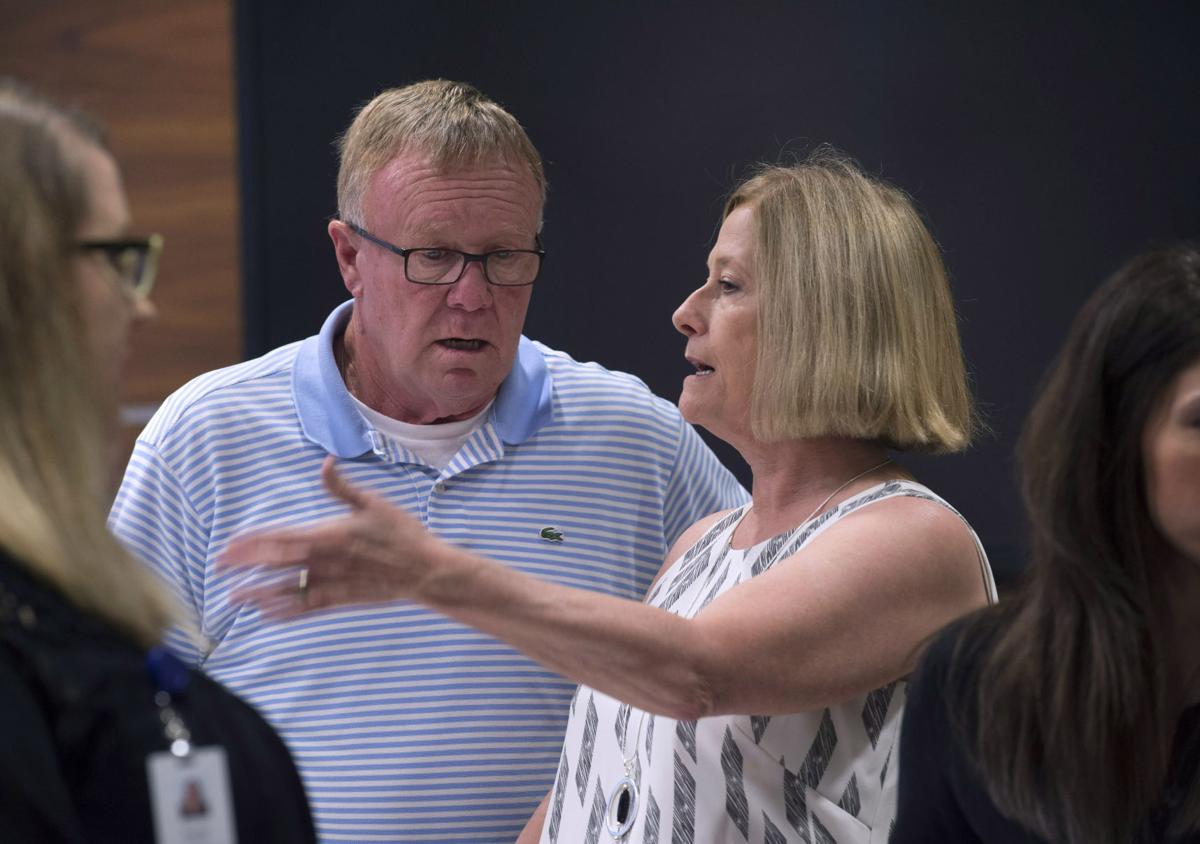 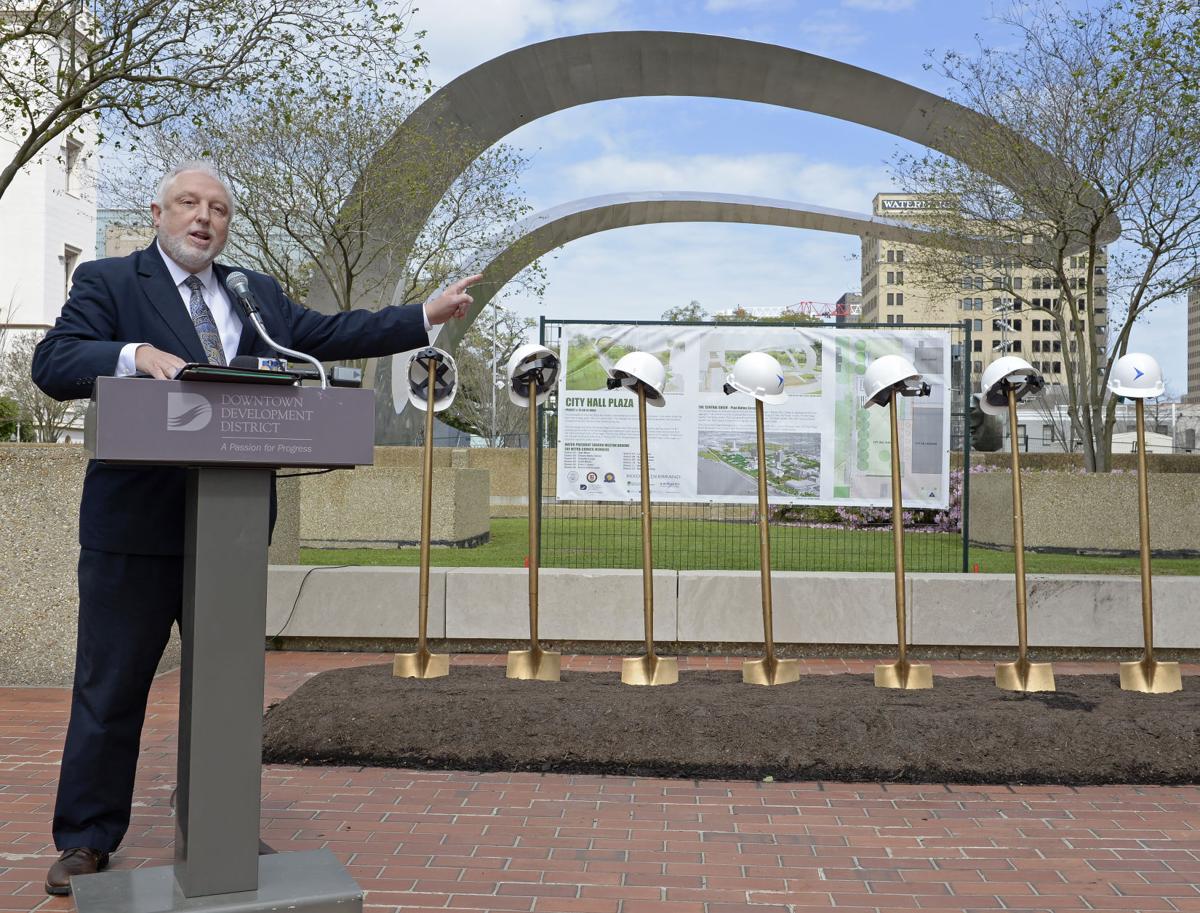 DDD Executive Director Davis Rhorer speaks about the project before the official groundbreaking on the plaza behind City Hall, to start work turning the courtyard into a grass field and paving over the parking garage entrance Wednesday March 8, 2017, in Baton Rouge, La.. The move will open up the area from Town Square to the River Center and allow performers on the Galvez stage to face a larger crowd area to the south. This is the project that precipitated the move of the law enforcement statue and is part of the overall downtown refurbishment.

DDD Executive Director Davis Rhorer speaks about the project before the official groundbreaking on the plaza behind City Hall, to start work turning the courtyard into a grass field and paving over the parking garage entrance Wednesday March 8, 2017, in Baton Rouge, La.. The move will open up the area from Town Square to the River Center and allow performers on the Galvez stage to face a larger crowd area to the south. This is the project that precipitated the move of the law enforcement statue and is part of the overall downtown refurbishment.

Mayor-President Sharon Weston Broome could lose key staffers and City Hall might say goodbye to some of its longest-working employees if the East Baton Rouge Metro Council approves a proposal that aims to cut back on retirees returning to government service as part-time workers.

Multiple Baton Rouge government department heads retired years ago, but have returned to work for the city-parish under a part-time designation through a policy called “retire/rehire.” The policy allows employees to return to work and be paid for 29 hours a week — though many work more hours — while also drawing retirement.

In BRPD retirement dispute, officials argue some OT should count toward benefits

Metro Councilwoman Donna Collins-Lewis has proposed doing away with the policy for employees who earn more than around $49,000 annually, and instead requiring that those positions be held by full-time employees. If the part-time employees wanted to continue in the full-time jobs, they would have to forfeit drawing retirement.

“People should not be able to come back into a full-time position as a part-time employee,” Collins-Lewis said. “When I first started working on this ordinance, I had no idea all of these people were part-time.”

Broome is opposing the proposal. The mayor said she appreciates the passion from Collins-Lewis, a friend and political ally, but that the concerns about part-time retirees should be part of a deeper discussion about city-parish benefits.

“I am a firm believer that when people assume a job, you don’t change the rules right in the middle of their job,” Broome said in an interview Tuesday. ““I can’t support the initiative as-is. I do think, though, her concerns have merit. And I do believe a broader conversation and research needs to take place around the exorbitant cost that we pay as a city [in retirement].”

The city-parish is expected to spend $452 million this year on payments for both active employees and retirees through contributions to their benefits programs, like health care and retirement, according to the 2018 budget. And the city-parish contribution rate this year is 33 percent for the City-Parish Employees Retirement System.

The ordinance Collins-Lewis has proposed would go into effect April 1, 2019, and require that retired employees either leave their jobs or return to full-time positions by then. It would not apply to Baton Rouge police officers and firefighters, who are covered by state civil service laws.

If the ordinance passes, Broome said the city-parish would need to speed up its training process for people who could replace the likes of Raiford and Hanlon. She also mentioned the importance having expertise to oversee the implementation of a new financial system, which Hanlon and her staff have helped to usher in.

The ordinance specifies that it would affect mayoral appointees, like Raiford and Hanlon, as well as council appointees like Batson. But Rhorer’s case is more unusual, because the Downtown Development District board appoints him to his position, though he is a city-parish employee.

East Baton Rouge remains without a contractor to haul off debris when a condemned building is knocked down.

Rhorer said he is concerned about the ordinance proposal, and that he hopes current employees will be grandfathered in. Rhorer earned $103,000 last year, according to the city-parish’s salary database. He said his working part-time has helped save the DDD money.

“You get paid 29 hours, but I work 24/7,” Rhorer said. “It’s a passion of mine and I think people know that. I’ve worked many years for downtown property owners.”

The DDD board voted Tuesday morning to oppose the ordinance from Collins-Lewis. They also said they would ask the Metro Council to exempt people from the policy who are hired by outside boards and commissions, including Rhorer.

Hanlon, who earned $98,500 last year, also questioned the policy at a Jan. 10 Metro Council meeting before the council delayed voting on it. Along with Hanlon and Assistant Finance Director Linda Hunt, multiple financial analysts, auditors and revenue analysts would be affected by the change.

One of Collins-Lewis’s reasons for pushing the ordinance is because City Hall has no blanket policy about when people are allowed to return to part-time work and when others are not, the councilwoman said. Collins-Lewis said it’s not fair that some people can return to work part-time and prevent less experienced, full-time employees from growing and advancing into top positions.

But Hanlon said that in the city-parish finance department, those who return have to step into lower positions so that they do not impede others from advancing in the department. Hanlon described the ordinance as “devastating” to the city-parish, saying the institutional knowledge from experienced employees has been especially important in the financial system implementation.

"It has definitely caused a morale issue in my department,” Hanlon said at the council meeting. “Every day employees ask me, am I going to be able continue my work? I don’t know what to tell them.”

Raiford, Batson and McCain all declined to comment for this article.

The Metro Council gave a thumbs up Tuesday to Mayor-President Sharon Weston Broome's 2018 budget proposal, which includes money for a jail div…

Collins-Lewis said she is concerned that city-parish government has lost the ability to attract and retain new, talented employees because they do not see a path for advancement.

The Metro Council is expected to vote on the ordinance at their 4 p.m. meeting Wednesday at City Hall.

Baton Rouge keeps policy that allows retirees to return, but some warn of its consequences