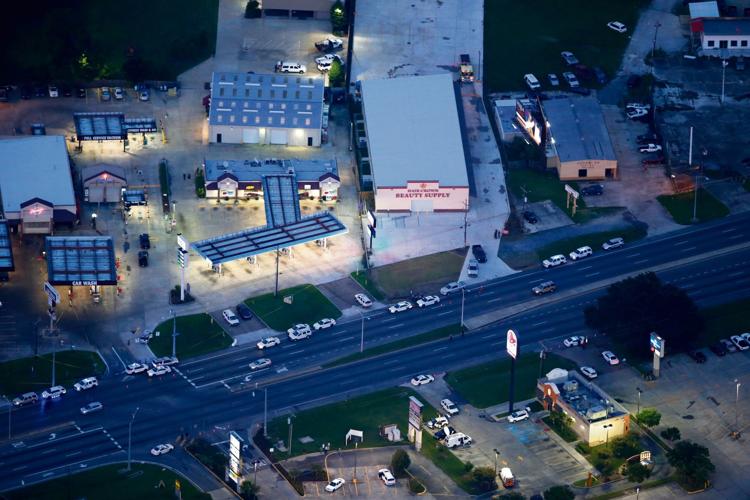 In this aerial photo investigators work the shooting scene in Baton Rouge La. where several law enforcement officers were either shot or killed Sunday July 17 2016. Multiple police officers were killed and wounded Sunday morning in a shooting near a gas station in Baton Rouge less than two weeks after a black man was shot and killed by police here sparking nightly protests across the city. (AP Photo/Gerald Herbert)

In this aerial photo investigators work the shooting scene in Baton Rouge La. where several law enforcement officers were either shot or killed Sunday July 17 2016. Multiple police officers were killed and wounded Sunday morning in a shooting near a gas station in Baton Rouge less than two weeks after a black man was shot and killed by police here sparking nightly protests across the city. (AP Photo/Gerald Herbert)

East Baton Rouge Sheriff's Deputy Brad Garafola had already wrapped up his extra-duty shift at the B-Quik convenience store, but he'd hung around the shop while waiting to meet his wife, whom he'd greeted with a text — "Good morning, my love" — an hour earlier.

Next door at Benny's Car Wash, Cpl. Montrell Jackson — known for keeping his car shining and his uniform spotless — had taken a few minutes on that Sunday morning to clean his patrol car and put air in the tires.

Matthew Gerald, a 41-year-old rookie Baton Rouge cop who'd joined the force after years in the military, sat in his patrol car at an Airline Highway red light, waiting to make the left turn into the convenience store parking lot to pick up a couple of energy drinks.

It was just around 8:30 a.m. on July 17. A white Chevrolet Malibu pulled up next to Gerald at the light on Airline Highway. Behind the wheel was a troubled 29-year-old ex-Marine named Gavin Eugene Long, who'd arrived in Baton Rouge five days before. In Long's rental car were two semiautomatic rifles, a 9mm handgun and a rambling suicide note that spoke of "horrendous acts of violence" and his growing rage toward the police.

The light changed. Gerald turned left into the shop, went inside, grabbed the drinks from the cooler and got in line. Long watched him turn. For a moment, it appeared Long might continue on his way.

But after a few hundred yards, he made an abrupt U-turn and headed toward the B-Quik. Within 18 minutes, all three of those officers — Garafola, a 45-year-old father of four; Jackson, a 31-year-old family man devoted to his wife and young son; and Gerald, a father of two daughters who didn't know his wife was pregnant with a son — would be dead, victims of Long's horrifying ambush. Long, too, would be dead, cut down in a hail of bullets from Baton Rouge Police Department officers who rushed toward the gunfire.

The brief moments of calm, now laced with grim foreboding, are captured in surveillance videos made public for the first time Friday along with a trove of other materials that document the awful chaos that followed.

The release of the documents, gathered by State Police and federal investigators in the days and months that followed, marked the end of a use-of-force review by the East Baton Rouge District Attorney's Office. Hillar Moore III, the district attorney, said the Special Response Team officers who shot Long and other officers who responded acted "courageously" in stopping Long, whom Moore and other authorities say almost certainly intended to kill additional officers.

"These officers ran into a very dangerous, unknown situation, risking their lives to save others," Moore said.

Relatives of the slain officers met with the district attorney in the weeks leading up to Friday's release to discuss the contents of the report, which also provided a glimpse into Long's journey to Baton Rouge from his hometown of Kansas City, Missouri, and his mindset before the shooting. Moore said all of officers' family members asked not to be contacted by reporters.

The Sunday morning may have appeared to offer quiet after a tumultuous and exhausting stretch for the officers who found themselves at the B-Quik. Protests over the fatal July 5 shooting of Alton Sterling, a 37-year-old black man, in a struggle with two white city policemen had largely dissipated and officers, who worked mandatory overtime and had their days off cancelled to police the demonstrations, were supposed to return to the regular schedules the next day.

The tranquility, and hope for a return to something like normalcy, was short-lived.

As Gerald waited in line to pay for his energy drinks, and surveillance cameras inside the B-Quik caught Garafola flashing a toothy grin, Long had parked his car in a nearby alley and walked up to Gerald's parked police car, briefly raising his rifle as if to shoot before noticing it was unoccupied.

Someone who'd spotted Long rushed inside the convenience store and alerted Gerald, who radioed for backup and then headed outside with the store's manager. Garafola, strapping his Sheriff's Office vest over his street clothes, following behind. Jackson, who'd finished washing his car, heard the radio call and drove across the parking lot to the convenience store to join his fellow officers as they headed behind the neighboring Hair Crown beauty shop to look for Long.

"Supposed to be a guy with a rifle next to the building," Jackson told a police dispatcher.

By that time, Long had gotten back in his rental car and pulled out onto Airline Highway before turning into a parking lot on the other side of the car wash. Wearing a ski mask and black clothing, Long began stalking his way back toward the officers. Long appeared to wave away a number of civilians — showing no interest in shooting anyone but law enforcement — as he made his way back toward Jackson, Garafola and Gerald, Moore said Friday.

Long snuck up behind the officers — spotting them on the far end of the driveway behind the Hair Crown beauty shop — and opened fire, killing Jackson and wounding Gerald. Garafola, who'd already rounded the building and couldn't see Long, frantically radioed for help as he took cover behind a dumpster.

Gerald crawled around the corner and out of Long's sight, the first Baton Rouge police officers to respond to calls for help — Cpl. Chad Montgomery and his partner — pulled into the beauty shop's driveway. Long immediately opened fire, shattering the windshield of the officers' vehicle and striking Montgomery on the right side of his head. Montgomery returned fire but didn't hit Long, who headed toward Garafola.

Long came around the corner just as Garafola, who'd briefly taken cover behind a dumpster, arrived to try to help his mortally wounded fellow officer. Garafola and Long engaged in a firefight, with the deputy firing 13 rounds at Long even as he was fatally struck by Long's rifle fire. As the bullets flew, Gerald, his voice weak, radioed, "shots fired."

"He put up a heck of a fight," Moore said, choking up while describing Garafola's efforts to save Gerald and fend off the gunman. "Just to see a man come to the aid of another, someone he may not have even known, to do everything he could do. It was really heroic."

Images from surveillance cameras at businesses in the Airline Highway strip mall provide a clear image of Long and the officers. Moore said he's withholding portions that show Long killing Jackson, Garafola and Gerald in what the district attorney calls disturbingly clear images.

"Out of respect for these officers, their family and their children, we have protected that," Moore said.

After killing Garafola and firing two more rounds into Gerald's body, Long circled to the north and briefly exchanged fire with a pair of unnamed BRPD officers setting up a perimeter.

The gunman then headed back toward his parked rental car. Moore said he suspected the gunman was either trying to retrieve an M4-style semiautomatic rifle he'd left stashed in the sedan or else escape to hunt down more officers elsewhere.

But when Long approached his car, he spotted Nick Tullier and Bruce Simmons, two East Baton Rouge sheriff's deputies who'd been drinking coffee not far from the strip mall when they heard the calls for help across their radio.

Tullier was checking out Long's car when the gunman opened fire, hitting the deputy in the stomach and then twice more in the head and shoulder after the wounded deputy managed to climb inside his Sheriff's Office vehicle. Simmons, who heard the gunshots but couldn't spot the shooter, was shot as he tried to make his way to Tullier.

"I'm hit, left arm," Simmons can be heard saying in recordings of radio traffic. Tullier's injuries left him in critical condition and doctors initially feared he wouldn’t survive. He remains hospitalized at a specialty hospital in Houston, where doctors are continuing to treat his wounds while beginning a long rehabilitation process.

Next the rush of police officers arriving to confront Long turned the tables on the gunman.

Six members of the Baton Rouge Police Department's Special Response Team had been stationed at police headquarters just down the street and arrived at the Airline Highway strip mall "within minutes," Moore said.

Two of the officers exchanged rifle fire with Long from positions around the Benny's Car Wash sign as others worked their way closer to the gunman's location near his rental car in the back of the FitnessExpo parking lot.

An officer, identified in the report only as SRT 5, emptied his magazine of ammunition and hit Long in the leg. He fell forward, hitting the ground and dropping his weapon.

"Don't move," officers screamed, as the tactical team closed in.

One officer fired two rounds after seeing Long move his hands. As the officers moved closer, Long — wounded but still alive — appeared to reach for his gun. Five opened fire, hitting Long a number of times and killing him.

Even as Long laid dead, officers continued to hold their distance, concerned a vest Long was wearing might be rigged with explosives. "We are not finished with the downed suspect," one officer said over the radio while calling for a bomb-investigation robot to check the body.

Moore said he would not release the names of the SRT members. The sheer number of times Long was shot — an autopsy found 45 separate bullet wounds — also make it impossible to determine which officer ultimately took the shot that killed Long, he said.

Moore said Long fired a total of 43 rounds during the ambush and ensuing gunfight. Officers fired at least 106 times.

In recent months, Americans here and across the country have winced at video from various police stops that call into question whether officer…

Three law enforcement officers who were killed during an ambush last year received medals of honor Thursday morning for their service.