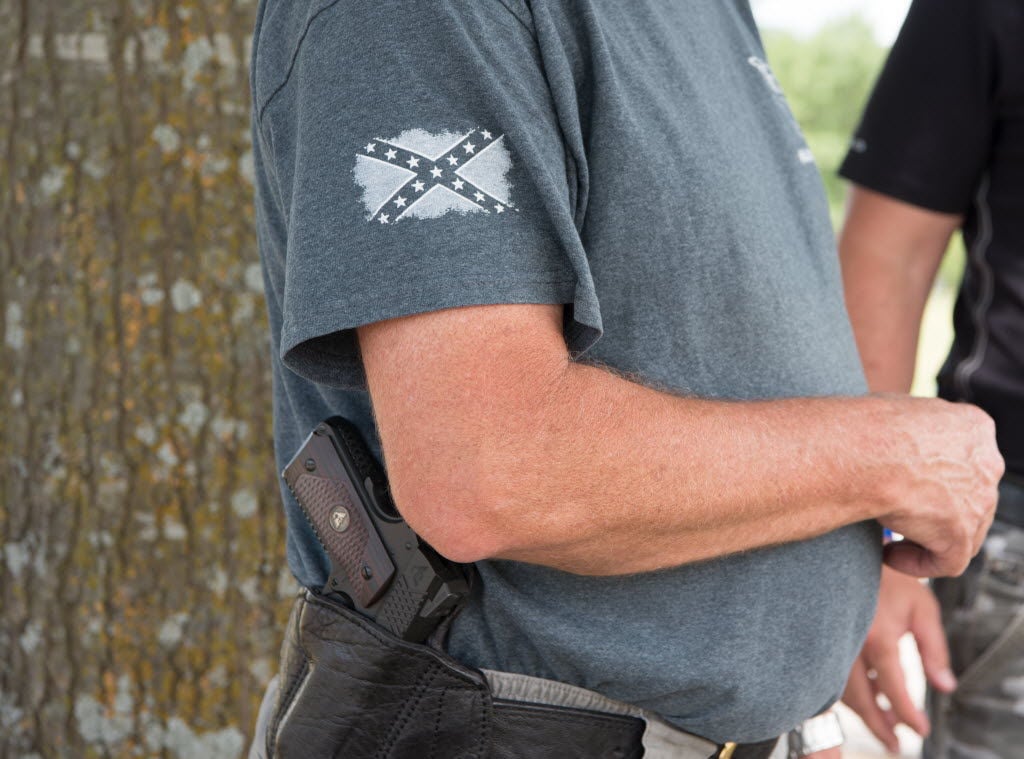 A person open-carrying a weapon in Louisiana must be at least 17 years old, be able to legally possess a firearm and follow the business' rules concerning firearms on its private property. 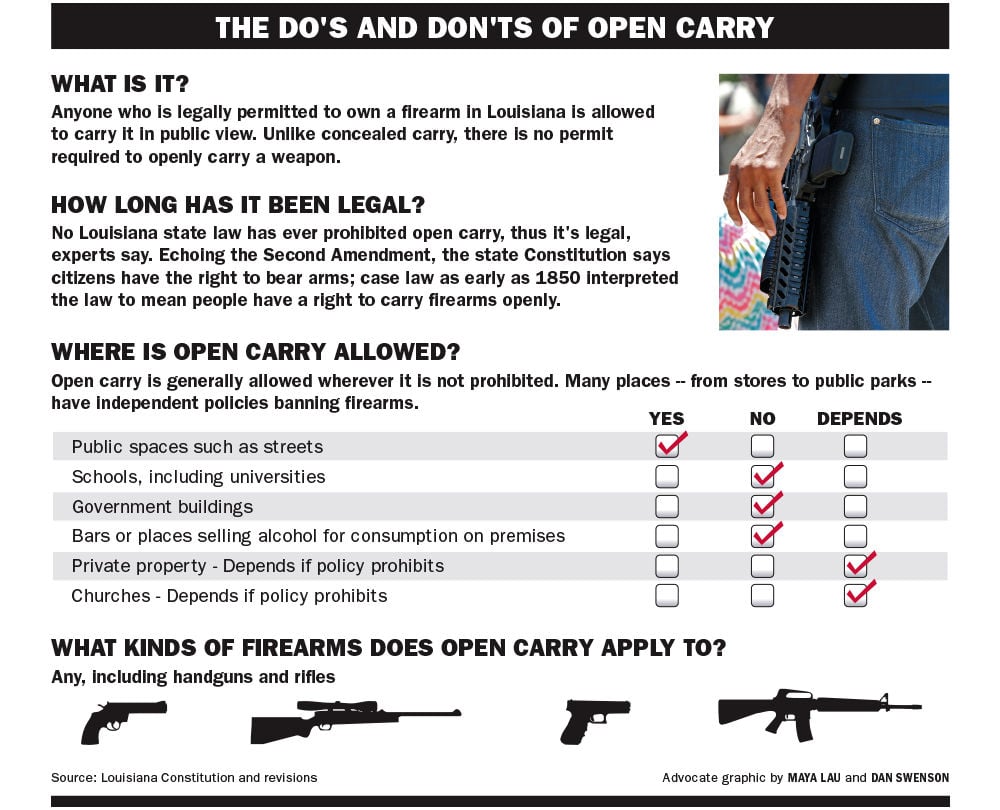 A person open-carrying a weapon in Louisiana must be at least 17 years old, be able to legally possess a firearm and follow the business' rules concerning firearms on its private property.

As ominous a sight as it was, Gavin Long’s heavily armed walk down Airline Highway fell squarely within Louisiana law, which allows gun owners to openly carry firearms in public.

Long's handling of a military-style rifle likely would have prompted Baton Rouge police to question him, regardless of whether any 911 calls had been placed about him. But before he leveled the Israeli-made assault weapon at his first victim — or committed some other crime — authorities had no right to take him into custody.

In fact, in the moments before he gunned down three law enforcement officers and wounded three others July 17, Long had been merely a “subject walking with a coat and an assault rifle," as one dispatcher described him.

Or as State Police Col. Mike Edmonson put it, quoting the initial emergency call, he was a "dude with a rifle going down Airline Highway."

“We don’t really have very many options in this situation because, under the (state) constitution and probable cause (rules), the only thing we really have is public concern,” Baton Rouge Police Chief Carl Dabadie said in an interview last week. “Should we have been able to stop him? That’s a question the legislators are going to have to work out.”

The bloodshed that Long unleashed in Baton Rouge last month has exposed an ambivalence among some law enforcement leaders about the right Louisianians enjoy to carry firearms openly in public — an unease that pits them against some Second Amendment advocates. Often aligned when it comes to guns, the two camps are divided over the wisdom of "open carry" and the challenges it presents for police.

"It scares the hell out of me," Sgt. C. Bryan Taylor, the president of the Baton Rouge police union, said of open carry, adding there’s an even greater risk for officers who encounter citizens sporting exposed rifles or shotguns. "There's a time and place for everything," he said, adding that he would prefer owners of long guns to avoid carrying those weapons in public.

Anyone legally permitted to own a weapon in Louisiana — generally speaking, those who are 18 and older and are not convicted felons — may carry any type of firearm in public places without any training or permit.

Open carry is legal in Louisiana because it's never been outlawed, experts say. The state constitution affirms the right of people to bear arms, and case law dating back to 1850 has held that to mean people may carry firearms openly.

Some Second Amendment advocates say banning open carry could create a slippery slope toward infringing on gun rights, which are firmly enshrined in Louisiana.

Dan Zelenka, president of the Louisiana Shooting Association, said the right to carry a firearm openly is an essential expression of the Second Amendment, noting instances in which gun owners may be unable to afford or obtain a concealed carry permit.

"The problem isn't with open carry," Zelenka said. "The problem is the criminal's intent to commit the crime. A law-abiding citizen could open-carry anything and be of no danger to anybody."

And while several law enforcement officials expressed concerns about gun owners carrying their weapons openly, Zelenka said it would set a dangerous precedent to begin stripping gun owners of their civil rights in the wake of the Baton Rouge shooting.

"You don’t throw away people’s rights because it complicates law enforcement,” Zelenka said. “If that were the test, then law enforcement would be able to tap your phones, pull you over and search you" without a warrant.

Open carry has unnerved the family of at least one of the slain officers. The father of Baton Rouge Cpl. Montrell Jackson said he couldn't comprehend why someone would be allowed to own an IWI Tavor, the Israeli-made assault rifle Long used to wreak havoc, let alone be allowed to carry it around in public.

Long, an Iraq War veteran, said in online videos that he owed his weapons training to the Marine Corps. He was fatally shot by at least one Baton Rouge Police SWAT officer after the July 17 attack.

Not all law enforcement officials have questioned the wisdom of open carry in the wake of the shooting. East Baton Rouge Parish Sheriff Sid Gautreaux, speaking on national television hours after the shooting, said the shooting deaths were “not so much about gun control as it is about what's in men's hearts."

By and large, however, law enforcement officials express a quiet discomfort over a constitutionally protected right that they say complicates their job.

“It is legal, but I’m asking you not to do it,” said St. Charles Parish Sheriff Greg Champagne, who serves as president of the National Sheriffs' Association. “If you do it, I promise you you’re going to alarm somebody. If you really feel the need to protect yourself, get a concealed carry permit.”

Dabadie, the Baton Rouge police chief, said open carry places his officers in a perilous Catch-22 situation. The police may question someone toting a rifle openly, he said, but lawmen can't compel that person to talk to them, and "there's no litmus test to put a piece of material on their forehead" to gauge that person's intentions.

"I realize that it's a right guaranteed in our constitution, and no one respects that more than I do," Dabadie said. "But it does create challenges for us because we don't know the mindset of the person. In the wake of everything that's happened, my officers tend to get nervous when they see someone with a long gun or openly carrying a gun."

Some open-carry advocates, while in favor of toting handguns in plain sight, explicitly advise against toting long guns in public.

"We don't encourage the open carry of rifles because of safety reasons," said Alfred "Speedy" Mercer, the information officer for the Louisiana Open Carry Awareness League. "If you carry a pistol in public and it's in a holster, it's safer because you're not having to move it around and hold it. … Whereas when you have a rifle, you've got to worry about the trigger being exposed, and of course you have to touch it more. And the more you handle a weapon, the more likely an accident could happen."

Still, Mercer said open carry is an important option to have during crises. After a hurricane, as his neighbors' houses on his street sat mostly abandoned, he informally policed his street with a shotgun strapped to his body to deter would-be looters, he said. He said the police, who were inundated with work, drove by and thanked him for helping out.

When Carl Dabadie Jr. got the call all police chiefs dread, he was deep in the throes of one…

Mercer said the fear of rifles and other long guns is misplaced, saying that rifles account for a very small proportion of shooting deaths.

But others say it's far from clear that openly carrying a firearm deters would-be criminals, said David Klinger, a former police officer and professor of criminology at the University of Missouri-St. Louis. In fact, it could actually make the bearer of that weapon the first target.

“The notion of having a deterrent capability among the general population sort of goes out the window when you have weapons in an open-carry posture,” Klinger said. “I just don’t understand it from a self-defense standpoint.”

Some elected officials have called for the state's open-carry law to be re-evaluated in the wake of last month's shootings. East Baton Rouge Parish Mayor-President Kip Holden told The Advocate last week that he has "some problems" with the law. He said the mere sight of an openly carried firearm can fuel passions and cause an otherwise routine argument to become fatal.

"I think it has to be examined," Holden said of open carry. "Emotions have to be placed aside."

Yet any attempts to alter Louisiana's gun laws encounter an almost gravitational resistance. Voters passed a constitutional amendment in 2012 that gave the state the strongest gun ownership protection laws in the nation, declaring the right to bear arms to be fundamental, and requiring any limitations on that right to face a rigorous legal test known as "strict scrutiny," the highest level of judicial review.

It remains unclear whether the Baton Rouge shooting will spawn legislation of any kind. State Sen. J.P. Morrell, D-New Orleans, said gun control bills are filed every year in Louisiana but are "almost universally unsuccessful."

"The question will be whether the public finally has had enough to support such a bill," he said.

Even if open carry remains legal in Louisiana, Dabadie said law enforcement needs clearer guidelines on how officers may respond to citizens who choose to openly carry.

"My officers are kind of stuck," the police chief added. "Tell us what we can and cannot do here, because unless (someone is) threatening somebody with a weapon, there's not a whole lot of" options for law enforcement.

The gun Gavin Long used to kill three Baton Rouge police officers, and wound three more, is “the ultimate weapon of the 21st century,” its man…

It's difficult to do a comprehensive cost-benefit analysis of American gun culture. It fuels a multibillion-dollar industry employing around 1…

State legislators on Wednesday rejected a proposal that would have allowed Louisiana residents to carry concealed weapons without a permit.