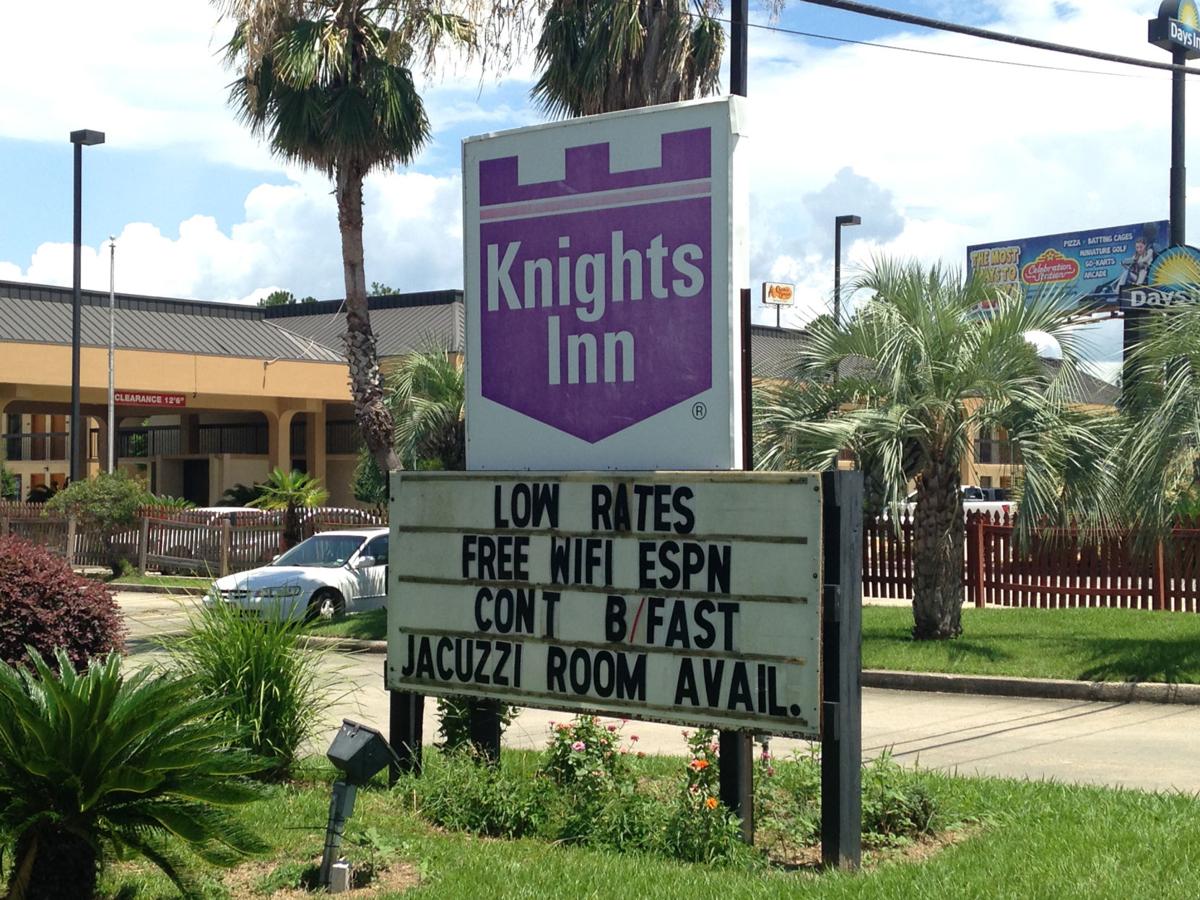 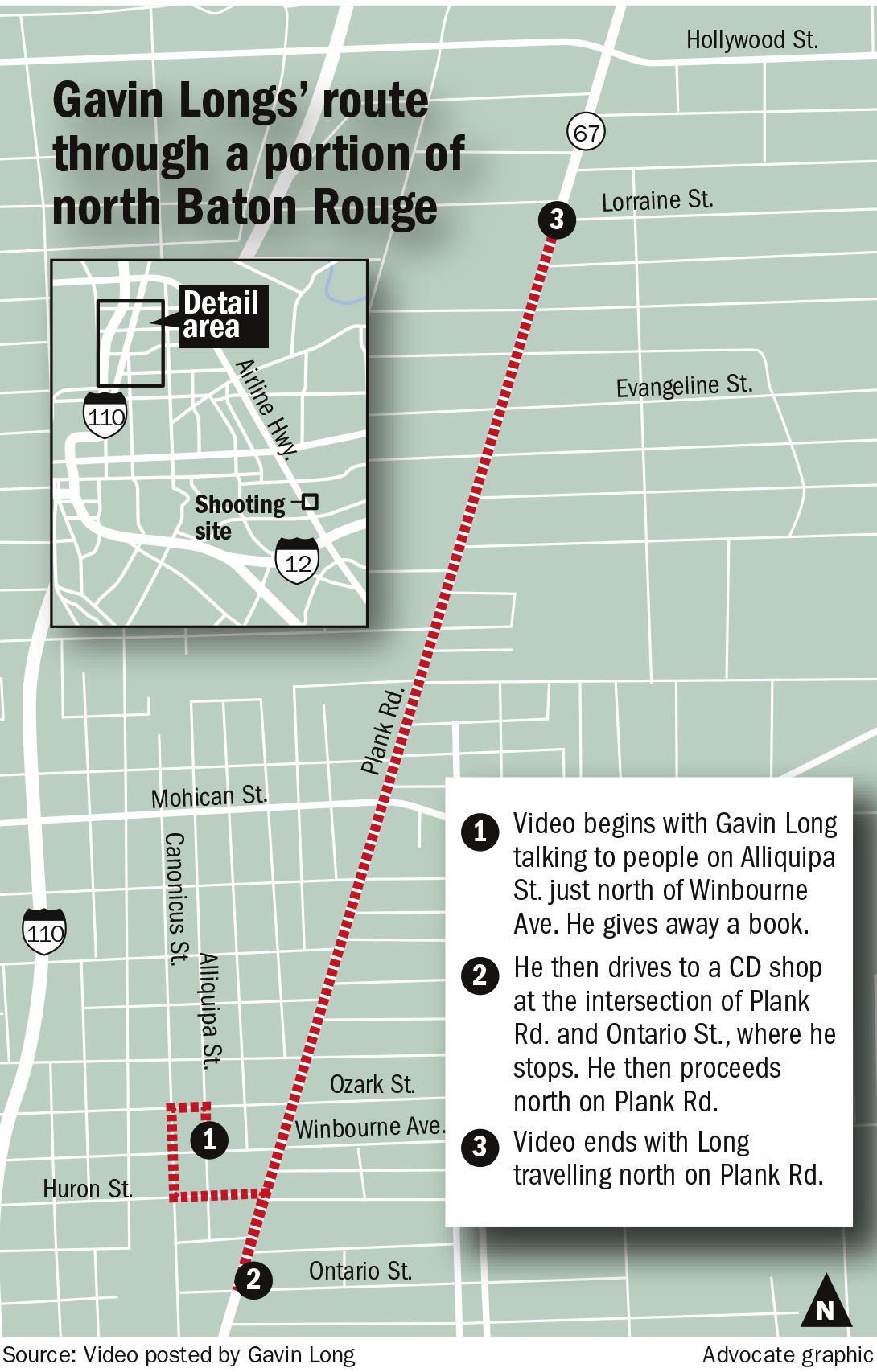 The video depicts Gavin Long in his element, promoting his self-help book and doling out unsolicited advice to perfect strangers -- on the streets of north Baton Rouge.

While wheeling around Plank Road, Long, the former Marine and life coach who killed three law enforcement officers on Sunday, claims in the video that he came to Louisiana not to protest the shooting death of Alton Sterling but to accord “real freedom” -- education -- to his “dark-skinned brothers.” Over the span of the 10-minute recording, Long urges a passenger in his rented Chevrolet Malibu to acquire multiple trades rather than focus exclusively on rapping.

He expresses a distaste for "crackers" and, in a rambling, one-sided conversation with a man he just met, mentions the political activist Huey P. Newton, who co-founded the Black Panther Party, and Sterling, the man fatally shot by Baton Rouge police this month whose death touched off protests around the country.

“If you’re not standing on your rights, then you have no rights,” Long warns in the footage, apparently uploaded to the Internet in the days before Sunday's bloodshed, though it remains unclear exactly when the video was shot. ”It don’t matter what the f--- you know.”

'They ran towards danger': Emotional leaders give step-by-step account of BR shootings

As state and federal authorities reconstruct Long’s final hours, seeking to discern his murderous motives, pressing questions remain about when the Kansas City man arrived in Louisiana and whether any of his local interactions presaged his ambush on Baton Rouge law enforcement. The video offers a glimpse into the killer's frame of mind last week but no specific foreshadowing of the attack.

Investigators have tracked down several people who came into contact with Long in the days before the mass shooting, including -- according to neighbors -- the local rapper who rode with him along Plank Road. So far, no one has been booked in the attack.

“We know (Long) was riding around. We’ve interviewed people who interacted with him in Baton Rouge, some in passing," Col. Mike Edmonson, the Louisiana State Police superintendent, said in an interview Tuesday. "We’re still putting the pieces together. We've gotten several pieces of information.”

The authorities have determined Long stayed at "several locations" over the course of "several days" in the capital city, Edmonson said. He declined to elaborate, citing the sensitivity of the ongoing investigation.

"We’re mainly concerned with what brought him to Baton Rouge," Edmonson said, "and what put him (at the site of the shooting) at 8:40 a.m. Sunday morning."

One of the places Long stayed was the Knights Inn on Airline Highway, according to a source with knowledge of the investigation. Two employees of the motel, where the nightly rate is about $50 and a sign at the front desk warns there is no pool, said Tuesday they could not speak about whether Long stayed there and refused requests to review the log book.

Among other evidence, investigators are tracing the Israeli-made, military-style rifle Long wielded when he fatally shot three officers and wounded three others, as well as a semiautomatic handgun he carried and a M4-style carbine found in his rental car.

The authorities have not disclosed where Long obtained those weapons but appear to be conducting an exhaustive search into his history with firearms. He visited the shooting range at OMB Guns in Olathe, Kansas, within the past six months and bought a target, which he then used in shooting practice, according to an employee there who asked not to be named.

The employee could not recall what kind of gun Long practiced with but said he had not purchased any weapons or said anything untoward at the store. He also estimated that the type of gun Long used in the attack Sunday would retail for about $2,500. He added that an FBI agent paid the business a brief visit on Monday.

Investigators also are combing through Long's online posts, which included videos in which he espoused increasingly radical ideologies that took on an anti-law enforcement bent after Sterling's controversial shooting death. Long posted prolifically on social media in the days before his rampage, but unlike other mass shooters does not appear to have left behind a manifesto or any writings specifically referring to his actions in Baton Rouge, according to authorities.

Even as Long disavowed an interest in protesting, the Plank Road video suggests that, shortly upon his arrival here, he headed for a neighborhood less than two miles from the site of Sterling's shooting death. In one part of the recording, he visits a business known as Mr. Kuttin Up CD Men, where an unidentified man asks Long whether he participated in the recent demonstrations.

"I’m not really into the protesting, but I do education because I know that’s what’s our real freedom," he says in the clip. "The protesting, next month, they gonna be gone, bruh. What we gonna do after that? We’re gonna have to educate ourselves after that."

When reporters showed up at the CD store Tuesday evening, a man immediately came out and asked them to leave.

Long appears to have made a similar recording using a "body camera" when he traveled to Dallas this month following the killings of five police officers there.

Much about Long's time in Baton Rouge remained unclear Tuesday. In interviews, a dozen people who organized protests or attended demonstrations here after Sterling's killing said they had never seen Long and were not in touch with him. Those included Abdullah Muflahi, the owner of the Triple S mart in North Baton Rouge where Sterling was slain, and his lawyer, Joel Porter, both of whom took part of the hours-long congregations outside of the store that stretched on for days after Sterling's death. Workers at a few businesses near Triple S also said they hadn't noticed Long.

"I never saw him nor was I contacted by him," said Gary Chambers, publisher of The Rouge Collection. Chambers served as master of ceremonies at Sterling's funeral and helped organize some of the peaceful rallies at City Hall and the Capitol that called for an end to police brutality.

"Taking a life is wrong, no matter how it happens," Chambers said. "We must continue the constructive path of seeking justice for Alton Sterling and will do so."

KANSAS CITY — Just two weeks ago, on July 5, Gavin Long posted another episode of his "Convo…

Long wasn't at a July 10 demonstration in which protesters encountered officers in riot gear just off Government Street, said Blair Imani, a community activist who helped organize the event. She said she and fellow organizers kept a watchful eye over the activity and would have recognized Long.

In at least one online post, Long professed a connection to the Nation of Islam, but representatives of that organization condemned his actions.

Robert Muhammad, the southwest regional minister for the Nation of Islam who was in Baton Rouge for some of the events after Sterling's death, did not respond to a request for comment. But in an article by The Final Call, the Nation of Islam's newspaper, Muhammad denounced the killings of the Baton Rouge officers.

"We carry no weapons," he told the newspaper. "We want justice for all, but we understand our peoples’ frustration given that there is no justice in the legal system when we are killed, hurt or harmed."

In the Plank Road footage, Long distributes copies of one of his books, The Cosmo Way, which he says he penned "for my dark-skinned brothers" during his time in Africa. He admonishes his passenger, the local rapper, to avoid becoming a father before he achieves financial stability.

"You don’t want no seed out there anyway if (it's) somebody you can’t support," Long says in the clip. "That’s negative karma. That’s bad energy out there in the universe."

Baton Rouge’s congressmen are trying to secure about $340,000 in federal money for each of the families of the Baton Rouge police officers and…