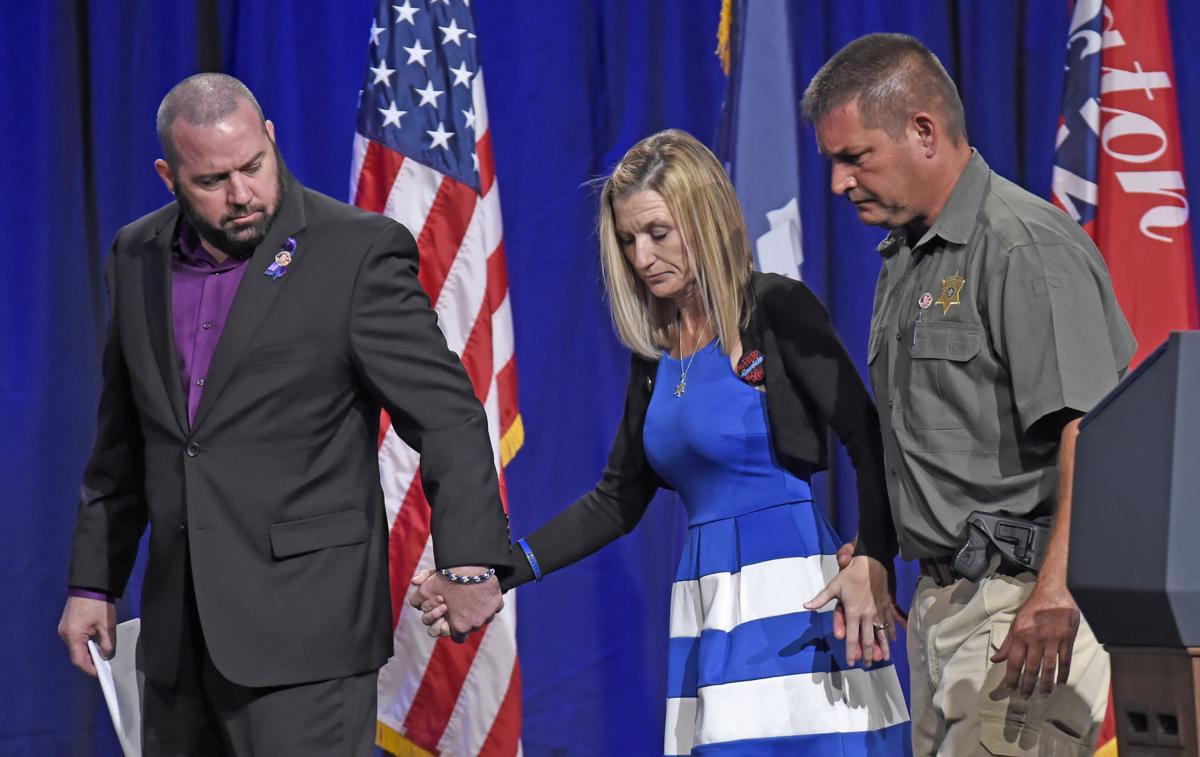 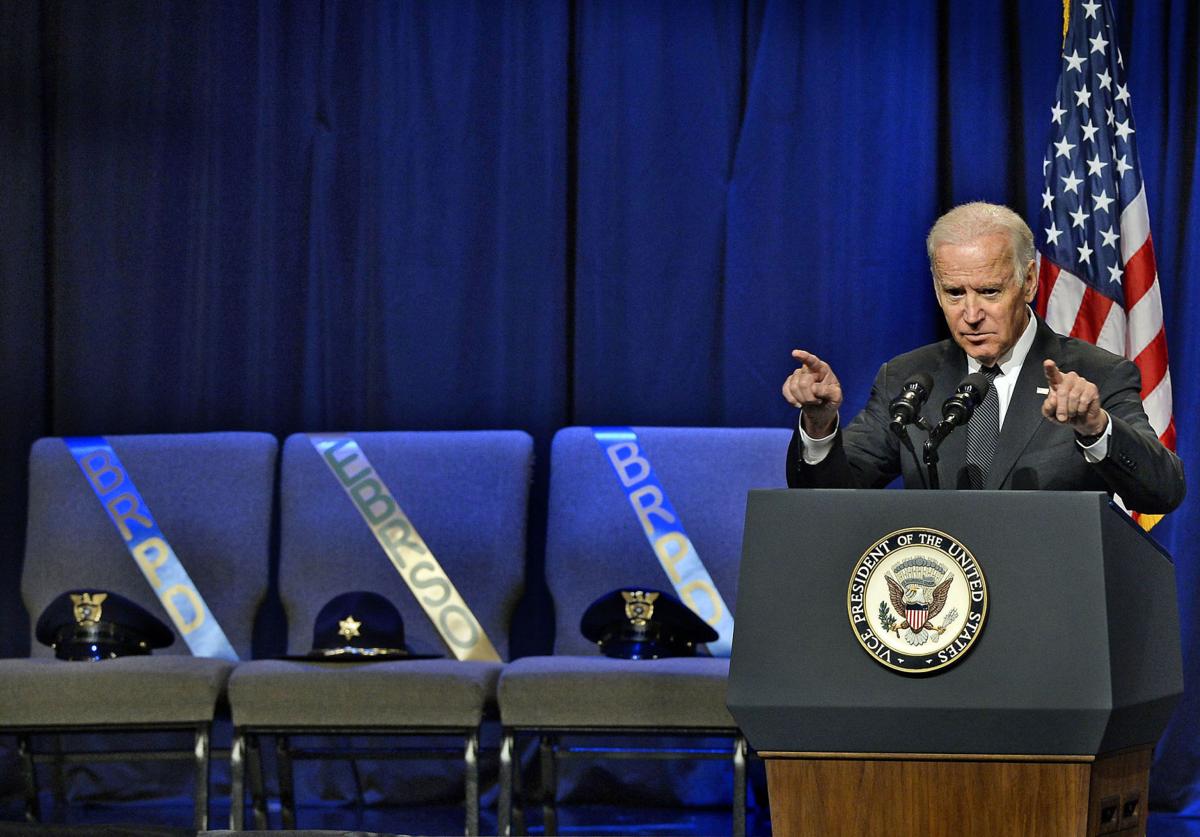 "It may be of little consolation to you now, but it matters who they were and who we are as a country: Defined by their courage and redeemed by their loyalty." -- Vice President Joe Biden, speaking to victims' families. 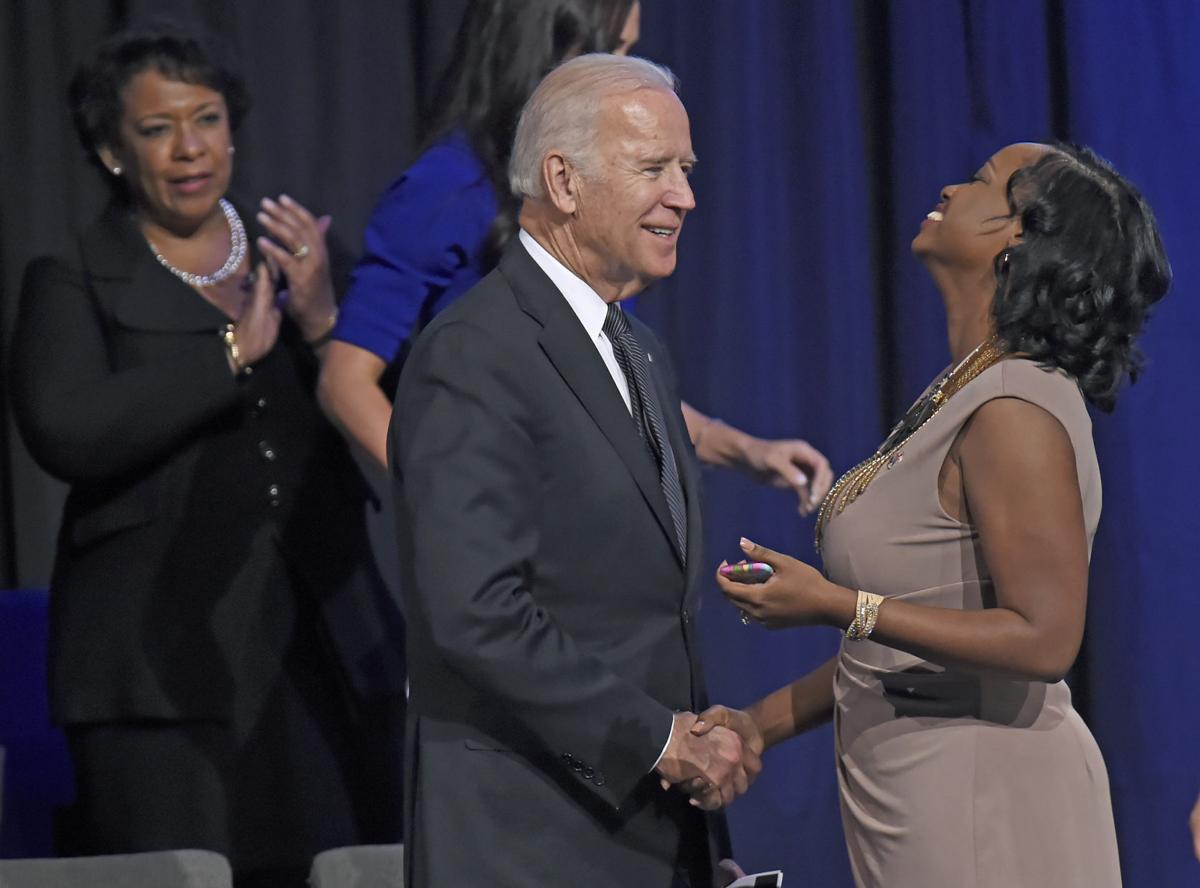 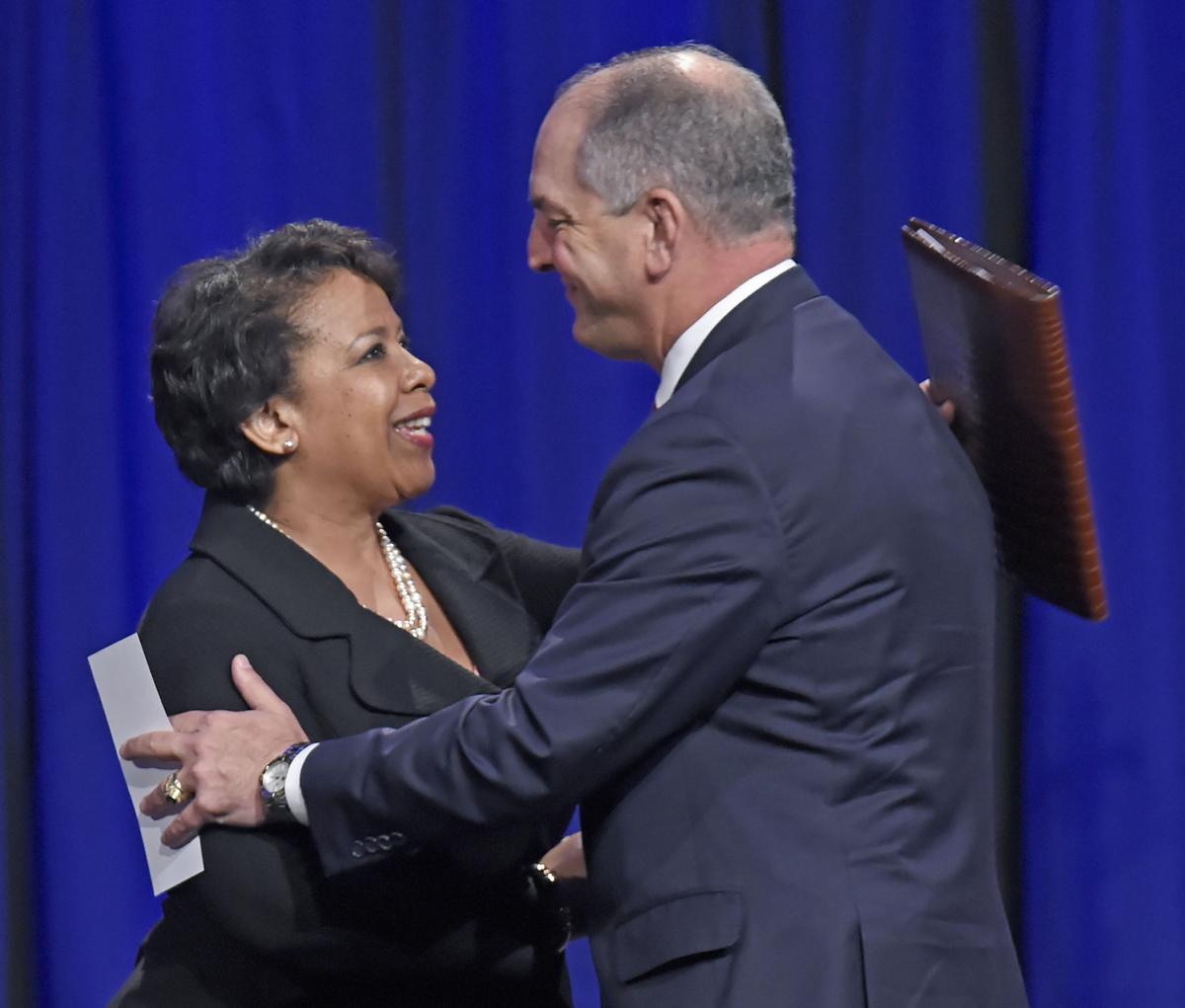 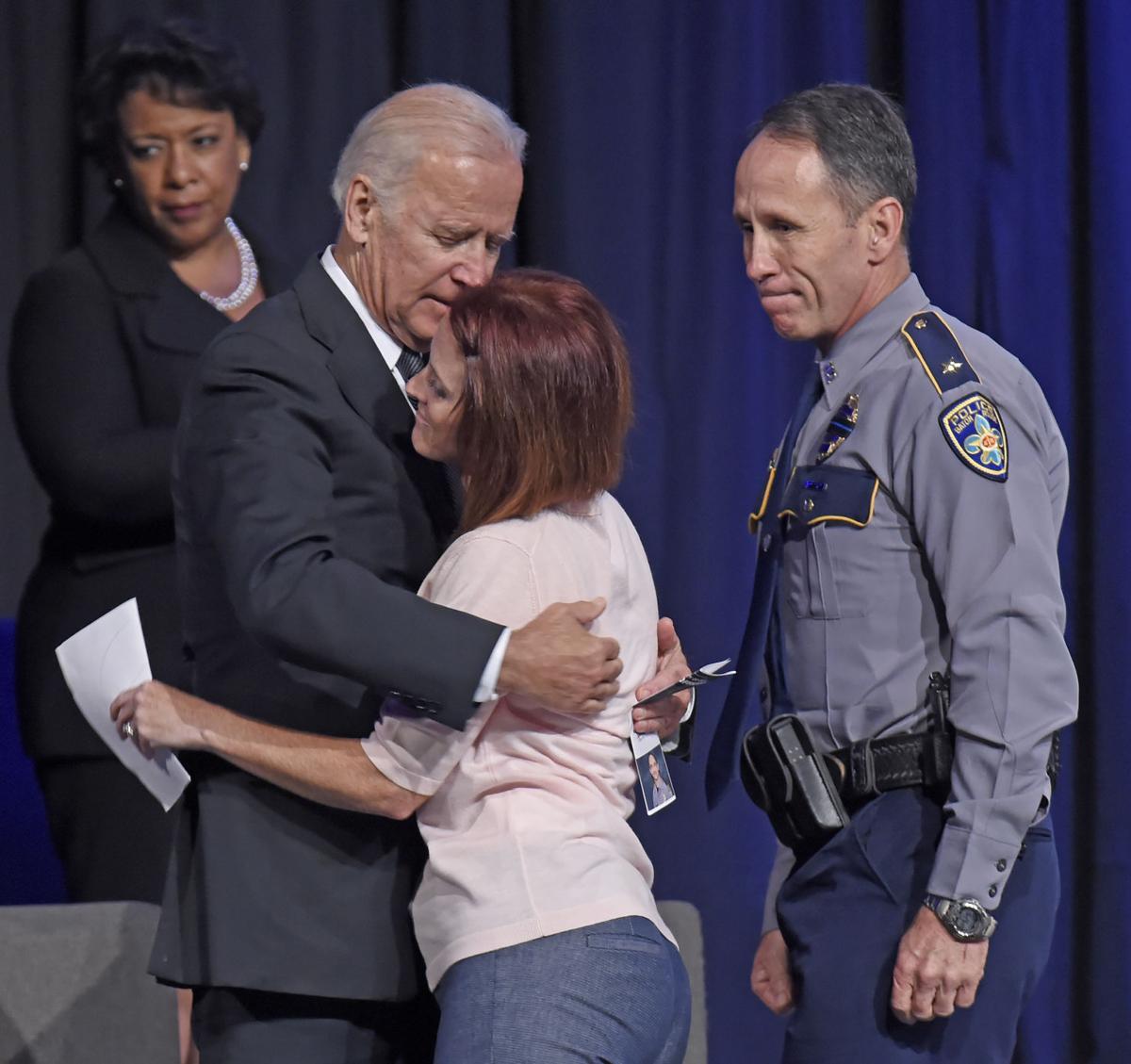 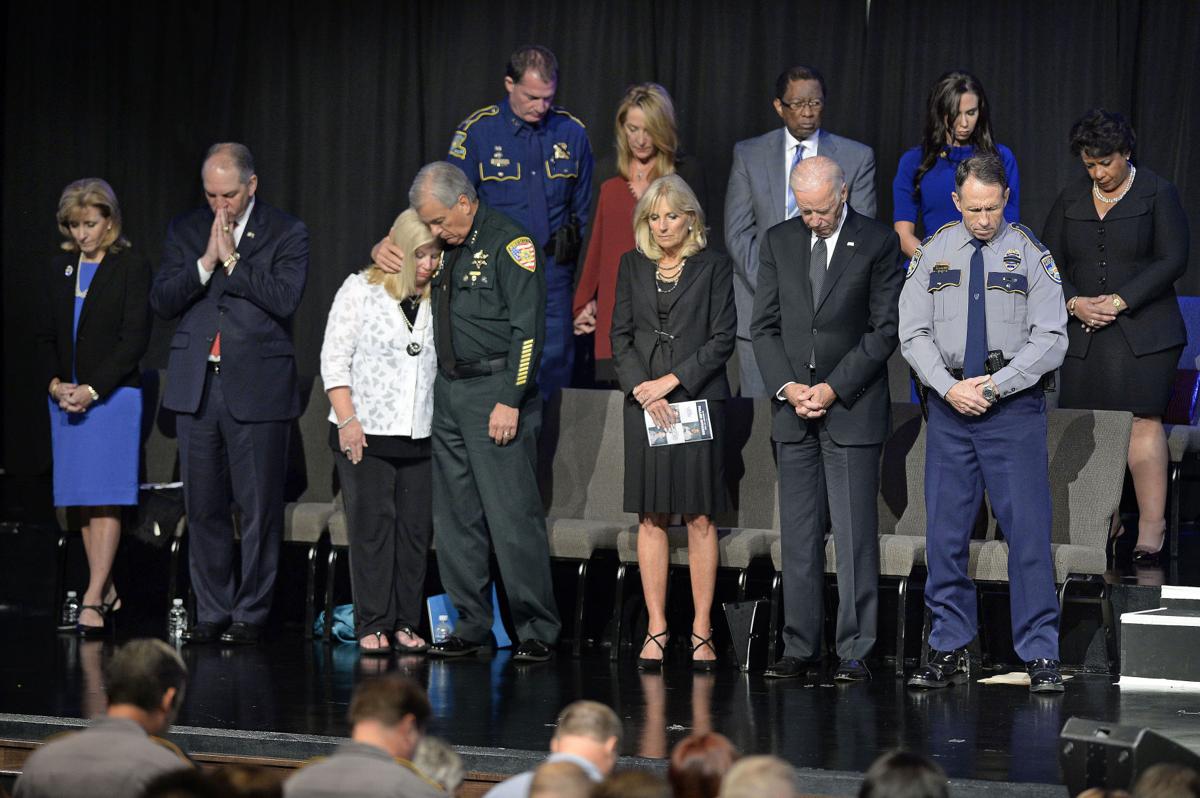 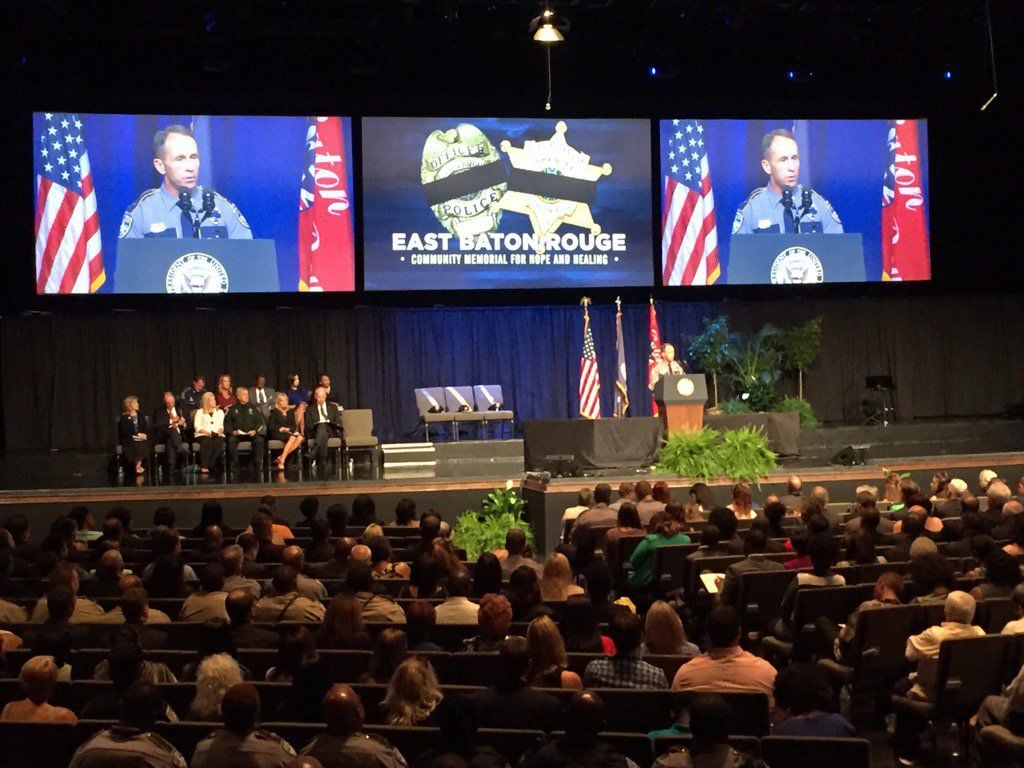 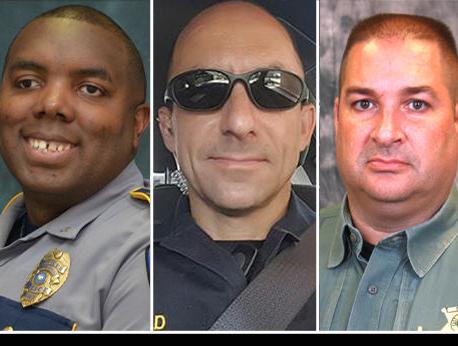 "It may be of little consolation to you now, but it matters who they were and who we are as a country: Defined by their courage and redeemed by their loyalty." -- Vice President Joe Biden, speaking to victims' families.

In a city exhausted by shootings that have put residents and lawmen on high alert, leaders once again gathered to honor the fallen on Thursday, this time buoyed by some of the nation's top government officials.

Vice President Joe Biden and U.S. Attorney General Loretta Lynch spoke at Healing Place Church during an emotional memorial to honor the three law enforcement officers slain less than two weeks ago by a gunman and to pray for the recovery of the three other lawmen injured in that shooting at a Baton Rouge strip mall.

Biden, who's suffered the loss of two children and his first wife, offered perhaps the most gripping speech of the afternoon as he tried to reassure the widows of Baton Rouge police officers Matthew Gerald and Montrell Jackson and East Baton Rouge Parish deputy Brad Garafola that they'll one day heal from a loss that's drawn the attention of the nation.

"No reason you'd know this because you've been so preoccupied, but your sons, your husbands, your dads — their pictures have been on the front page of every paper in the United States of America," Biden said. "Everybody, everybody in the country is talking about it. Everybody is learning their stories."

Biden, the last of seven officials to speak, was also the first to mention the name of Alton Sterling about an hour into the memorial— acknowledging the killing of a black man by a white Baton Rouge officer on July 5 that serves as the uncomfortable context to the officer killings here that came days later.

But Biden was quick to note that Sterling's death was manipulated into a murderous motive by Gavin Long, the Missouri native who shot the officers, saying Sterling had nothing to do with the deaths of the officers and that Long was simply looking for "an excuse to kill."

The vice president, who at times paused, looking straight into the faces of the slain officers' family members in the front row, gave them an orientation to what he called an "uncommon fraternity," an involuntary network of families of fallen law enforcement officers that will be a lifelong source of support.

"I didn't have the privilege of knowing these brave men. But I knew them," Biden said. "Confident, committed, determined, trustworthy, passionate. Above all, always, always loyal. Each of them had the DNA, this instinct. Where the devil it comes from God only knows, this instinct to protect."

Lynch, who will remain in Baton Rouge on Friday for a community roundtable and meeting with law enforcement first responders, offered a remembrance of each of the slain officers, promising that her agency will support the Capital City.

"We know our work will take time, and as we go forward, I pledge to you that the Department of Justice that I am honored to lead will be there with you, long after the lights have faded and the attention has gone away," Lynch said. "When the hard work of rebuilding begins, we will stand with you. We stand with Baton Rouge."

The Justice Department is investigating Sterling's killing. Official details of his death indicated that officers encountered Sterling because they were responding to a report of an armed man. A warrant said that as the lawmen tried to restrain Sterling, they spotted him reaching for a gun that was poking out of his pocket.

"The chaos, confusion and pain of July 17 filled us all with disbelief, a profound sadness, and a quiet, unyielding anger," said Dabadie. "This cowardly act that brought us here today was meant to divide us and tear us further apart. An outsider came in to inflict his pain on our city, on our community and our families. We saw evil that day, the worst of human nature, and we responded with good."

The other special guests Thursday proved to be the widows of the deceased officers; each delivered speeches with composure, just days after they buried their husbands.

Echoing the now-famous words left in a Facebook post by Jackson, his wife, Trenisha Jackson, asked the entire audience of hundreds to stand and raise their right hands, taking a newly-minted oath: "I will not let hate infect my heart."

Tonja Garafola, the wife of the slain deputy, revealed that because of recent attacks on law enforcement prior to July 17, she had feared her husband would be targeted. So she'd started asking him to keep his shirt untucked while he worked an off-duty detail, wearing plainclothes, at the B-Quik convenience store near where he was ultimately killed. He complied, she said.

She recounted her disbelief that Sunday as she drove to the B-Quik to meet her husband in preparation for a vacation the next day. As she approached, she said, she was blocked by swarms of law enforcement cars. Eventually, she was told her husband had been killed.

"I was not even allowed to see him at the hospital," Tonja Garafola told the audience. "I had to go home with our kids and try to explain to them that our hero was not going to be coming home back to his family.

"Since then, our children have slept in our bed just so they could feel and smell the presence of their dad," she said of the couple's four youngsters.

Dechia Gerald, Matt Gerald's widow, recounted how their marriage hadn't always been smooth, as the Iraq War veteran sometimes grew distant as he searched for his next calling, which he ultimately found in becoming a Baton Rouge Police officer this year.

The mother of two, who recalled her red-white-and-blue-themed wedding to her husband, thanked everyone for the support she's been given.

"I have some big shoes to fill, and to be honest I'm not sure I'll ever be able to fill those shoes, but I promise as I stand here before you today, I will do everything I possibly can do to make sure that this country, our city and our state, continues to be united and join forces and become the country that my husband knew and loved and fought so hard for," she said.

Some of the more poignant moments also came when no one was giving a speech. As songs played, a slideshow featured snapshots of the officers in everyday moments in and out of uniform.

There was Jackson lying on a bed with his newborn son; Garafola with his daughter holding a fish on a beach; Gerald with his red-haired bride on their wedding day.

The slideshow also showed pictures of East Baton Rouge Sheriff's Cpl. Nick Tullier, a reminder of that deputy's fragile state as he remains in an intensive care unit since the shooting. Tullier, who was shot in the head and stomach by the lone gunman, has undergone abdominal surgeries but was still in critical condition as of Wednesday.

Another injured deputy, Bruce Simmons, attended the memorial with his arm in a sling. The sixth officer, who serves with the Baton Rouge Police Department, did not have critical injuries and has not been identified.

Biden also spoke about the need for better community policing, recalling times when officers had more support to spend time at places like Boys and Girls clubs.

"It used to be there were resources around the country, when crime rates plummeted, that you actually got to know the neighborhood," Biden said. "You knew the kid, 15 years old, who walked out and was standing on the corner with a hoodie, you knew the difference between if he was a gang banger, or the next poet laureate."

New Orleans Police Superintendent Michael Harrison, who attended the memorial along with several officers and New Orleans Mayor Mitch Landrieu, said having lost officers in the line of duty made it clear to him how important it is to show support and pay respects to those from other departments.

Harrison said Biden's words appeared to "come straight from the heart, straight to the families." Harrison also praised the Vice President's comments about the need for greater community policing, saying the strategies require a great deal of manpower but that his and other departments across the country are working on implementing the strategies.

Several officers from out-of-state agencies also attended the memorial, as they did for the funerals of the three lawmen.

Debra Pelich, a detective with the Seattle Police Department, said the ambush in Baton Rouge evoked memories of the 2009 killing of a Seattle policeman and the murder of four officers in a coffee shop just south of the city.

"Wherever the memorial is, we're here as a brotherhood and a sisterhood to honor and respect the fallen," Pelich said. "I've had the opportunity to be around the community here. It's moving because there is great love and respect — I see the community coming together."

Standing next to her after the ceremony in a crisp red uniform, Staff Sgt. James Johnston of the Royal Canadian Mounted Police, said "hearts are broken.

"May God bless all of you who pin on that shield every day to protect the rest of us," Biden said in closing his remarks.

As the mayor-president's race draws nearer, local political organizations and nonprofits are starting to throw their muscle and money behind c…