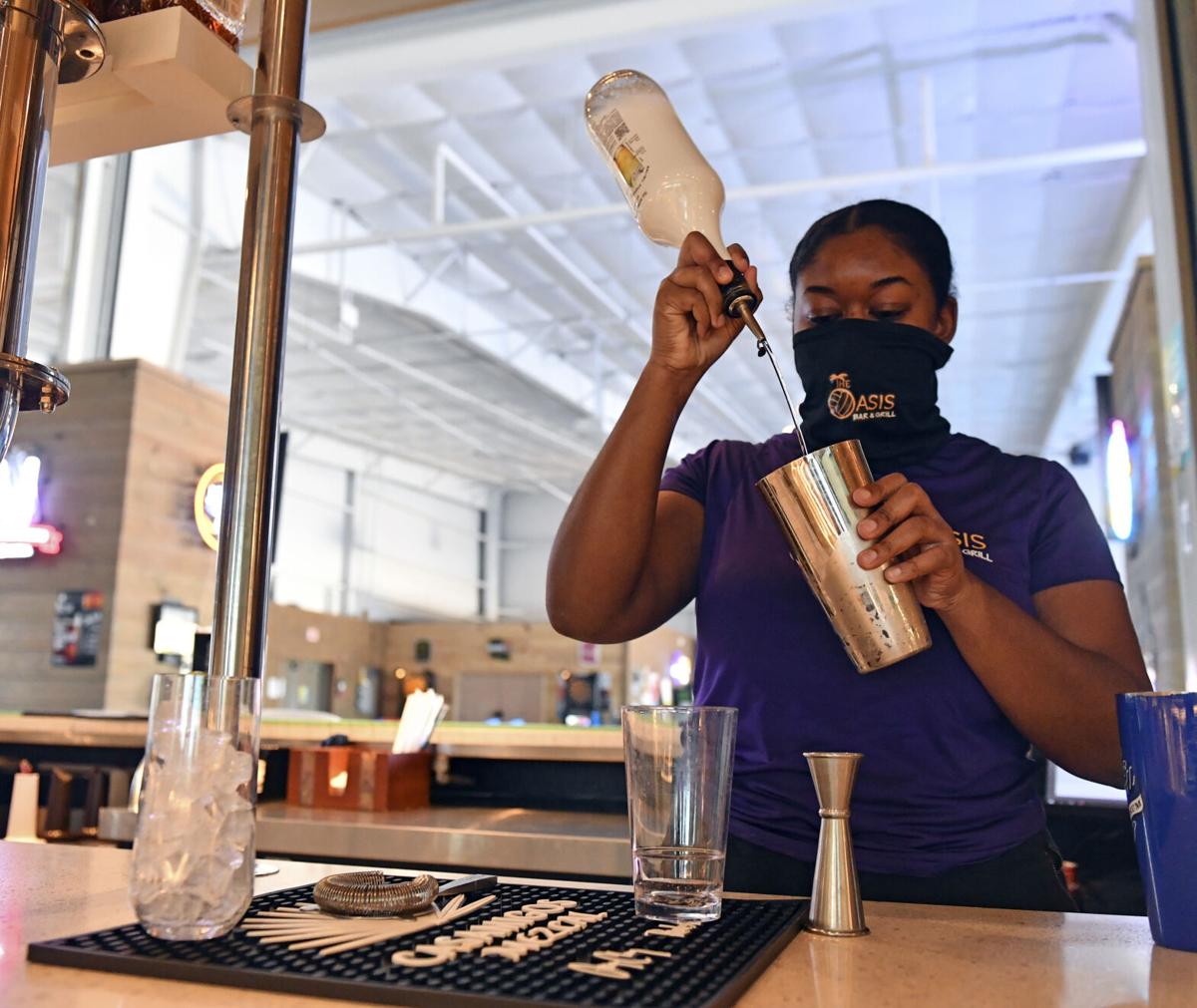 Bartender Chelsey Johnson makes a 'Phase 3' cocktail Wednesday at The Oasis in Baton Rouge as the venue prepares for College Night, the first night under a loosening of Phase 3 coronavirus restrictions in the state and city-parish. 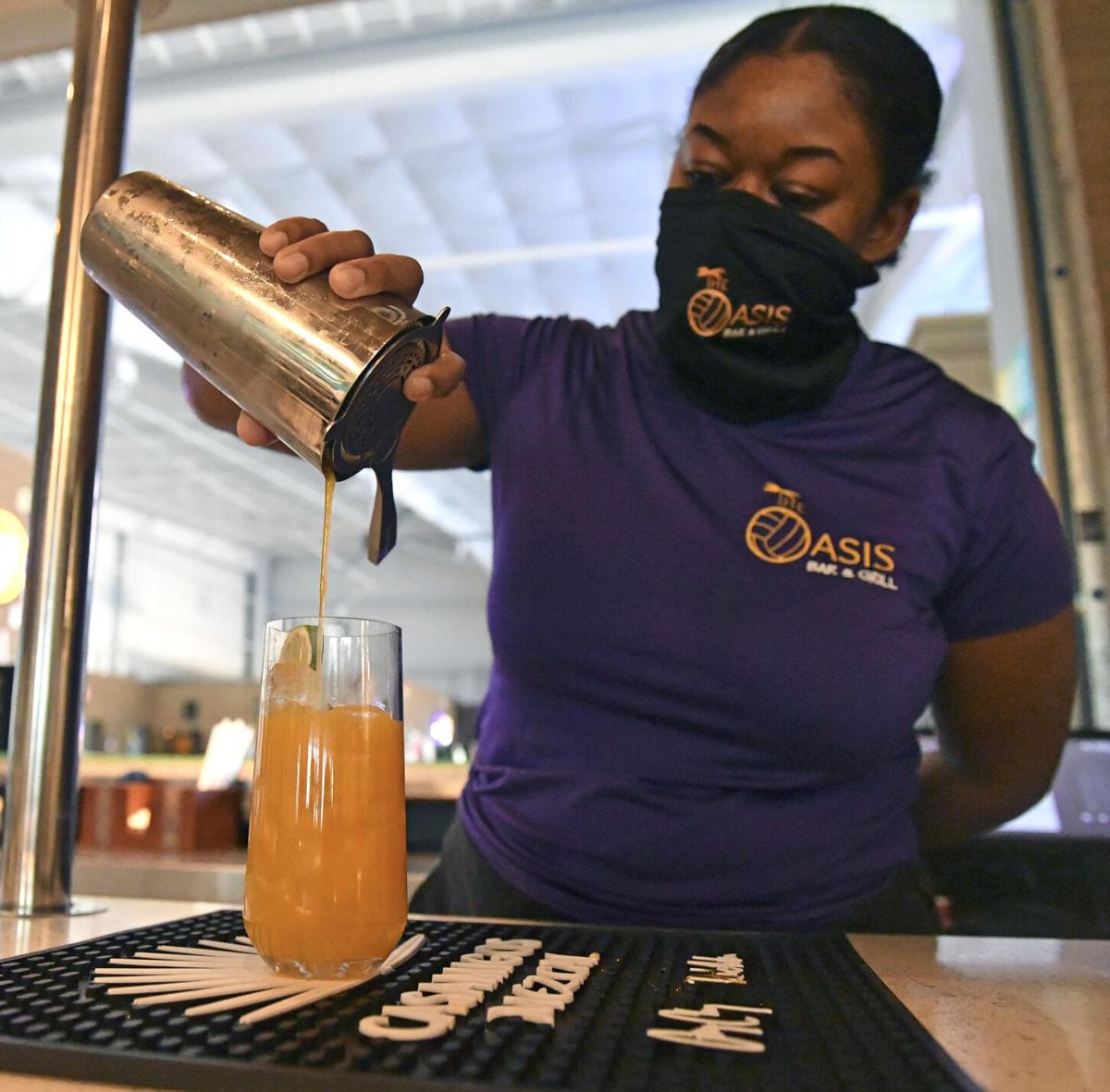 Bartender Chelsey Johnson makes a 'Phase 3' cocktail at The Oasis in Baton Rouge as the venue prepares for College Night, the first night for a Phase 3 loosening of coronavirus restrictions in the city-parish. 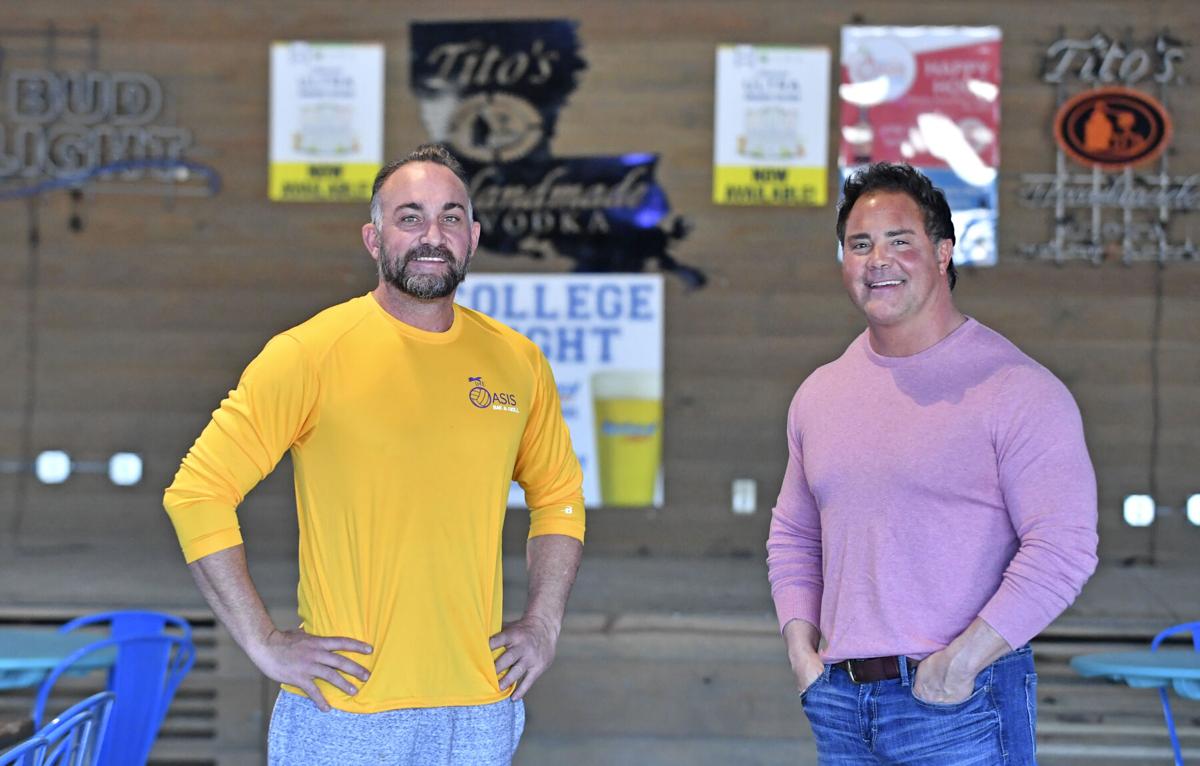 Co-owners Luke Forstmann, left, and George O'Connor stand in front of the stage where live music will be played at The Oasis in Baton Rouge as the venue prepares for College Night. 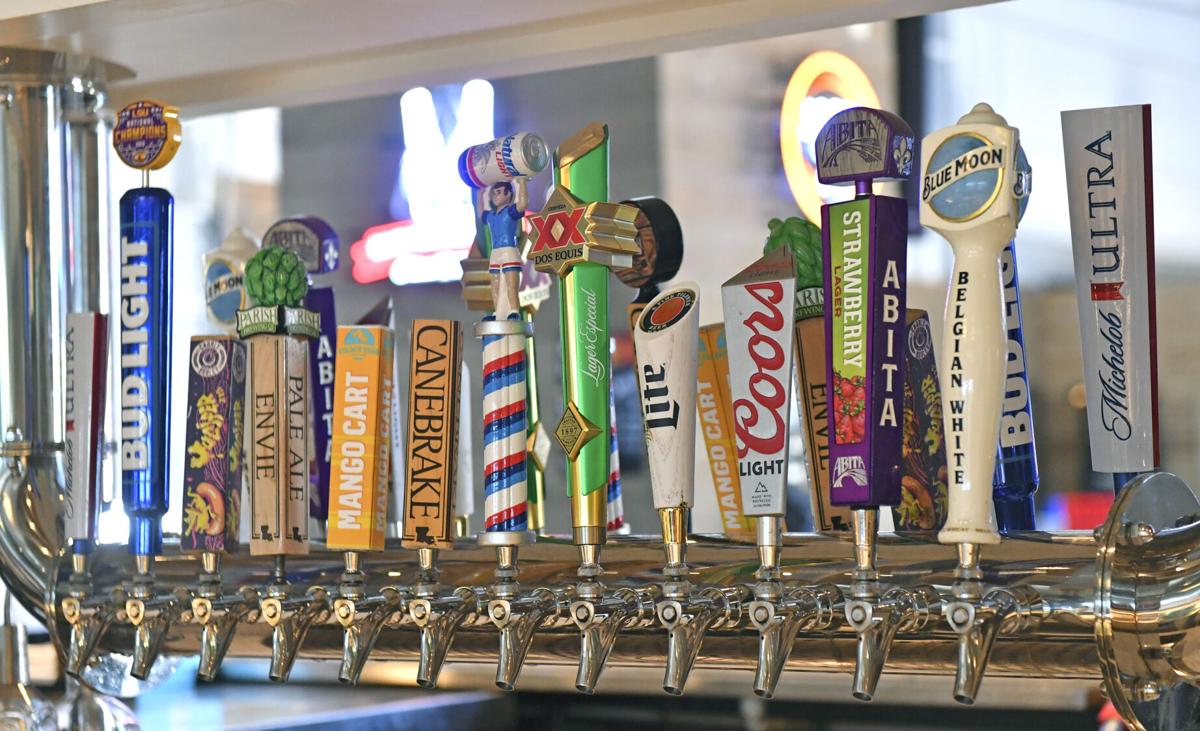 Tap handles are cleaned and ready to go Wednesday at The Oasis in Baton Rouge as the venue prepares for College Night, the first night for a loosening of Phase 3 coronavirus restrictions in the state and city-parish.

Bartender Chelsey Johnson makes a 'Phase 3' cocktail Wednesday at The Oasis in Baton Rouge as the venue prepares for College Night, the first night under a loosening of Phase 3 coronavirus restrictions in the state and city-parish.

Bartender Chelsey Johnson makes a 'Phase 3' cocktail at The Oasis in Baton Rouge as the venue prepares for College Night, the first night for a Phase 3 loosening of coronavirus restrictions in the city-parish.

Co-owners Luke Forstmann, left, and George O'Connor stand in front of the stage where live music will be played at The Oasis in Baton Rouge as the venue prepares for College Night.

Tap handles are cleaned and ready to go Wednesday at The Oasis in Baton Rouge as the venue prepares for College Night, the first night for a loosening of Phase 3 coronavirus restrictions in the state and city-parish.

Statewide restrictions on live music indoors have been lifted, but business owners said conditional strings attached are too tight and costly for bars and restaurants, and they instead are relying on outdoor spaces for musicians to play for customers.

"I will have indoor music later but not right now; we're not allowed enough people to make it," said David Gianes, owner of Crazy Dave's Daiquiri's and Billiards in Gonzales. "As long as the weather is nice, we'll stay outside. I think it's just a matter of another month or so and (the governor is) going to open it all back up," he said.

For now, the business is surviving by having a drive-thru and patio.

Gov. John Bel Edwards has moved the state into Phase 3 of an economic reopening, which includes live music indoors for the first time in nearly a year. Businesses don't have to request permission from the Fire Marshal's office before events but regulations do limit capacity to 50% in restaurants and 25% in bars when musicians are playing. Bars still must close by 11 p.m. under the state rules. The air conditioning system indoors must change out the air at least six times each hour in the space occupied by performers. Beyond that, businesses must have one additional form of protection such as bands which play behind plexiglass and musicians not singing are expected to wear masks.

"We just booked a band for this Friday," said George O'Connor, owner of The Oasis Bar & Grill in Baton Rouge, but don't expect the concert to be held indoors, though the restaurant could under new rules.

Louisiana will move to a Phase 3 of coronavirus rules on Wednesday, which means a loosening of some restrictions.

Instead, it's going to happen on an outdoor stage and area that spans 5,000 square feet, double the restaurant's inside space.

"Hopefully, it will give us a little normalcy. Our saving grace has been our outdoor patio so we have more space," O'Connor said.

Demand for live entertainment has been steady since November, but the restaurant and bar opted to wait until the weather became milder and restrictions were loosened.

"Now that the weather is nicer, crawfish season is here. With the live bands. it's going to bring everybody out to have a good time," O'Connor said. "We're projecting to have a really good spring and summer."

Other bars have been eager to host live music again but the financial strain of months without revenue and uncertainty about the future have been too difficult.

Bottle & Tap has been closed for several months during the coronavirus pandemic, but the rules for indoor live music are too onerous, he said.

"We'll probably just cancel (music) when it's raining," he said. "The Fire Marshal wants you to have a separate HVAC system and that's thousands and thousands of dollars. They also want no one standing, which is impossible if you're having a dance band. It's positive news in the right direction, but it's too hard to follow these restrictions."

It's been a year since Teddy's Juke Joint in Baker had live bands indoors and it might not happen again until May. The bar, which has been in business for 42 years, was closed for six months and only reopened in Phase 2 several months ago.

"The only reason I'm still open is that I own the building," said Teddy Johnson, who recently passed his 75 birthday. "I'm just hanging in there by a thread."

Louisiana to move to Phase 3 of coronavirus restrictions, bars allowed to open statewide

After seeing the worst spike of the pandemic recede in recent weeks, Gov. John Bel Edwards on Tuesday moved the state into the loosest phase o…

A few months ago, Johnson hired an acoustic musician for an outdoor show. Only a handful of customers showed up. The coronavirus pandemic "ruined" the business, Johnson said.

"I lost all the good bands I had and now I can't afford to hire them back," he said.

Even some of his liquor suppliers have raised prices and minimum orders.

"You can't just jump back up and start it again," he said. "I already know this year I won't make no money. It's going to take a while to get back and so many people aren't working."

Some bar owners are waiting until the restrictions are loosened even further in the coming months.

Happy's has an outdoor courtyard already, so the bar hosts live bands on weekends. Boudreaux and Thibodeaux's  hosted several shows last year but not in recent months.

"It's not feasible. The requirements are just too much and there are too many hoops to jump through," Carnegie said. "We just won't open (Boudreaux and Thibodeaux's) until the restrictions are much looser, hopefully in April. Right now, (indoor) live music is borderline impossible to do."

Beyond that, Carnegie said bars prohibited from selling alcohol past 11 p.m. has been a big dent in business.

"We're hoping that things will open up more and we can take big steps, not just baby steps," he said.

Lance LeBlanc, co-owner of La Divina's Italian Café, expects to host live music on Thursday night. The local café has been hosting musicians for the past several months outdoors on a patio, but has been forced to cancel when it rains. Now it will simply move indoors and sacrifice some audience capacity.

"Right now, it's more enjoyable to do it outside," LeBlanc said. "We wished we could have brought it inside when it was only 40 degrees outside."

The warm weather has led to eager audiences as demand for live entertainment hasn't waned.

"We've had some really good turnaround in the past couple of weeks. With the mandate changing, it will only help bolster the mindset of the public that it's safe to enjoy music and go out to eat," LeBlanc said.

Mid City Ballroom expects to wait until the next phase to start booking bands again for indoor shows.

"There are multiple variables that go into our decision. Most importantly is we are still in a global pandemic and vaccines aren't available for everyone," said Aaron Scruggs, manager at Mid City Ballroom. "We will continue to do our part and not put our staff, artists and fans at risk indoors as outdoor shows are the way during these times."

The overall experience would not be ideal due to capacity restrictions either, Scruggs said.

Les Crooks, regional general manager for ASM Global, is responsible for the Raising Cane's River Center, which has hosted events such as a wrestling tournament, cheerleading and dance competitions, and its annual indoor ice skating rink in recent months.

The event center, which can hold 8,000 people during a concert, is limited to crowds no larger than 250 individuals.

Many musical artists are unwilling to play in venues that aren't packed houses, he said.

"We will be going through our list," Crooks said of artists who are willing to play in less full arenas.

It's unclear when the first concert might be held. There are dozens of events postponed from last year. Fans should expect to socially distance from other visitors and wear masks, even in their seats, since food and drink won't be allowed in the seating area.

"It's a great first step, we're going to explore our options," Crooks said.

It seems like much of the entertainment industry is looking to return by third-quarter this year.

"That seems to be when the major artists are looking to go back out on the road," he said.

'In the middle of a hurricane': Bar owners beat up as Louisiana stops live music indoors