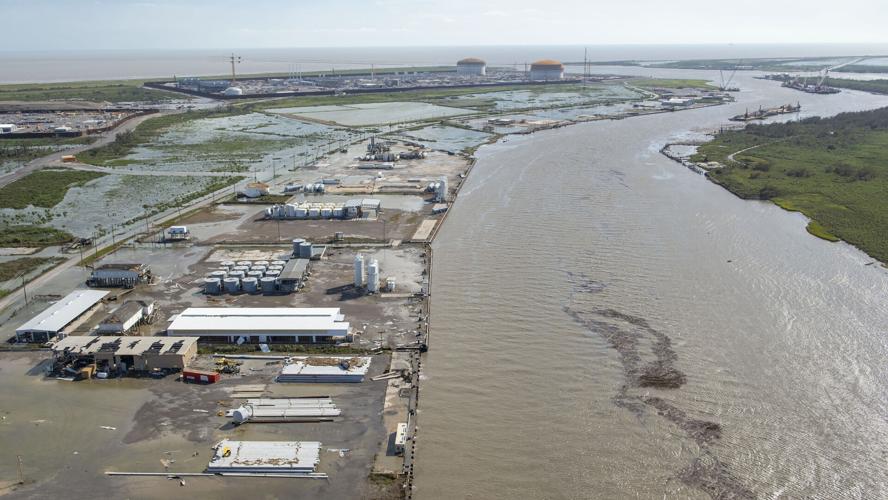 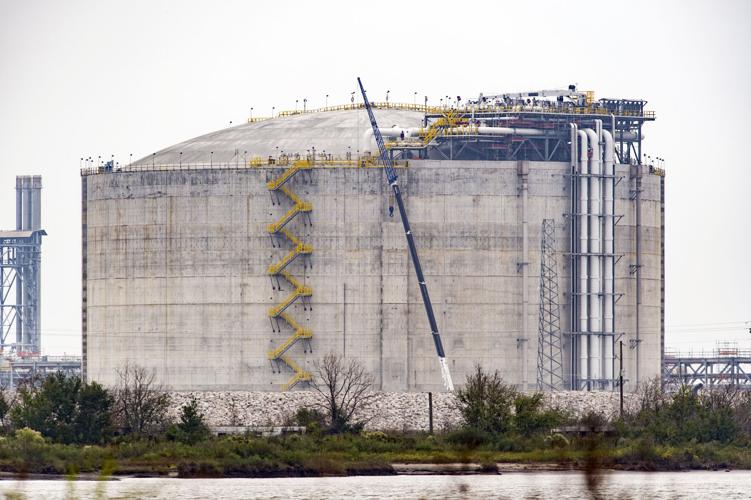 CAMERON — At the southwestern edge of Louisiana’s withering Gulf of Mexico coastline, the two white domes of a new industrial facility tower over the surrounding chenier plain of Cameron Parish.

The facility — a liquefied natural gas export terminal dubbed Calcasieu Pass in honor of the nearby Calcasieu Ship Channel — began exporting in January after an approval process that began eight years ago. It can pump out up to 10 million metric tons annually of LNG across the globe.

Much more than that is coming from the Virginia-based company behind the plant: Venture Global LNG.

Amid a booming market in Louisiana, Venture Global has gradually laid out a game plan to emerge as the champion of the LNG fight. Its playbook includes another LNG terminal in Cameron and two in Plaquemines Parish in the opposite corner of the state.

Last month, Venture Global announced it had secured $13.2 billion in financing for Plaquemines LNG, which it said was the largest financial closing in the world this year. The facility is expected to come online in 2024.

Though it plotted its LNG moves years ago, Venture Global’s emergence comes at a time when the United States is pushing to increase its LNG exports to Europe and as natural gas prices are rising at home.

While supporters of Venture Global and the six other LNG facilities planned for south Louisiana say the industry is creating jobs in rural areas where they are sorely needed, critics say the industry’s environmental risks are far too great for storm-weary Louisiana and its economic promises are a road to nowhere.

Despite the economic and environmental headwinds, one thing is becoming clear: Venture Global isn’t going away, and their endeavors may define the futures of Cameron and Plaquemines parishes — and perhaps Louisiana as a whole.

From the east coast to the Gulf Coast

Venture Global’s journey to the Louisiana coast began more than a decade ago.

Robert Pender and Michael Sabel founded Venture Global Partners LLC in 2010. Their LNG subsidiary, Venture Global LNG Inc., was incorporated in 2013 and is headquartered in Arlington, Virginia. They act as executive co-chairs, with Sabel serving as CEO.

How Venture Global first discovered Louisiana isn’t evident. Venture Global executives were not made available for an interview, but the company sent The Advocate | The Times-Picayune a statement touting its impact on Louisiana’s economy.

But why they chose Louisiana is obvious. The state’s proximity to the Gulf of Mexico, its access to low-cost natural gas, its experienced workforce and its generous tax incentives all make Louisiana the prime LNG destination.

“It’s just become kind of ground zero for LNG development just because of historic precedent and then the advantages that area provides,” said David Dismukes, executive director of LSU’s Center for Energy Studies.

Venture Global’s love affair with Louisiana has only grown over the years. It announced its first terminal, Calcasieu Pass, in 2014, followed by Plaquemines LNG in 2016, Delta LNG in 2019 and CP2 LNG in 2021. They’ve also been the leaders this year in announcing new long-term contracts.

Collectively, the terminals will carry at least a $29 billion price tag — even as Delta LNG’s budget is still a mystery — and an anticipated output of 70 million tons annually, dwarfing the national leader, Cheniere Energy’s Sabine Pass, and its 34 million-ton annual production.

Sabel, in an interview with Bloomberg, said long-term deals have been Venture Global’s bread and butter. In another interview with CNBC, he said the company has “relentlessly” attempted to streamline its manufacturing process to slash costs.

Venture Global’s strategy doesn’t seem to be changing anytime soon, but the market is. Natural gas prices have crept up toward $9 per MMBtu, or million British thermal units, raising concerns about the economic viability of LNG facilities that won’t come online for years.

Dismukes said the $9 range is still competitive compared to higher prices in Europe and Asia. And with the proposed Nord Stream 2 pipeline connecting Russia to Germany all but dead, global supply could be crimped further.

“That gas is going to have to be sourced from somewhere else,” he said, “and it’s probably going to be here.”

Years before these terminals broke ground, Curtis Fountain saw a map of the proposed sites and didn’t quite trust his eyes.

“We didn’t believe they were coming, but they did,” said Fountain, president of the Cameron Parish Police Jury.

Three LNG export terminals are in operation in Louisiana and nine more are planned. They’re supposed to bring hundreds of direct jobs — and thousands of construction jobs — with them.

Venture Global’s terminals are slated for at least 630 direct jobs and 6,800 construction jobs, according to the company’s Industrial Tax Exemption Program contracts. Those figures don’t include Delta LNG, which hasn’t filed for an ITEP break yet.

“They put a lot of our people to work, and they pay very well,” Fountain said.

Plaquemines' population has been steadier at around 25,000, said Parish President Kirk Lepine. But he said the LNG jobs are still needed after Phillips 66 shuttered its refinery.

“That was a gut punch,” he said. “Venture Global has kind of filled in some of the gap.”

Fountain and Lepine said Venture Global has been a good community partner. The company’s local efforts include a 58-acre recreational complex, called Lighthouse Bend in Cameron, and training programs for Plaquemines workers.

On the tax revenue side, things are more complicated. Even after Gov. John Bel Edwards reformed the ITEP program early in his tenure, local government agencies still forfeit up to 80% of industrial property taxes over 10 years. So the revenue windfalls are limited, though sales taxes will still be collected during construction.

‘They’re getting a lot from our state’

John Allaire has a new neighbor next to his Cameron Parish home, and he isn’t happy about it.

A retired environmental engineer, Allaire bought 155 acres off Gulf Beach Highway near the Gulf of Mexico in the late 1990s. The Calcasieu Pass facility is now visible from the property.

Allaire has filed multiple complaints with the Louisiana Department of Environmental Quality over continuous flaring at the facility. Officials investigated and found nothing of concern, according to state filings.

Allaire and the Louisiana Bucket Brigade, a grassroots environmental justice organization, have taken up a fight against Venture Global and the state’s other planned LNG facilities. Their battle comes at a time when Edwards’ administration has offered full-throated support of LNG as an economic driver and a “transition” fuel as Louisiana moves away from fossil fuels.

During a tour of Cameron Parish with reporters, Louisiana Bucket Brigade officials said the greenhouse gas emissions at these facilities are too high for LNG to be considered a “clean” fuel. They noted Calcasieu Pass isn’t using carbon capture yet, and they’re wary of carbon capture’s effectiveness.

“There is no solution in doubling down on the same exact thing that is causing to emit more and more greenhouse gases — millions and millions of tons,” said James Hiatt, the organization’s southwest Louisiana coordinator.

Justin Kray, a cartographer who works with the organization, said a coffer dam around Calcasieu Pass pushed storm surge from Hurricane Laura further north, leading to greater damage in the Lake Charles area.

The group said LNG exports have historically gone to Asia, not Europe, and that exporting natural gas can lead to inflated prices domestically. They also leveled criticism at ITEP for sucking away tax dollars from local governments without guaranteeing the jobs will go to Louisianans.

“They’re getting a lot from our state, and there’s absolutely no promise of jobs for people in the state or even in this parish,” Louisiana Bucket Brigade Director Anne Rolfes said.

Venture Global’s statement touted the company’s job creation figures and the support from local officials for LNG. The company also plans to capture up to 1 million tons of carbon annually, but those carbon capture projects are still under regulatory review.

In addition, a coastal hazards study filed with the state Department of Natural Resources claims Calcasieu Pass “will have no effect on the pattern of inundation under hurricane conditions” at the terminal site.

“Louisiana has emerged as a powerful global hub for ‘all of the above’ energy innovation, and Venture Global is honored to be part of this transformation,” the Venture Global statement said.

“I think that there will be additional sort of commitments and technologies that will help continue to address what those numbers are,” he said. “I don’t think it’s anything that the industry is trying to hide behind.”

Lepine, the Plaquemines Parish president, said he’s not worried because the terminals in his parish will be located in remote areas. Fountain, the Cameron Parish leader, said the environmental groups have no concrete proof of impending doom, and he expects the facilities to avoid costly mistakes.

He also doesn’t see these facilities going away anytime soon.

“I don’t think any part of Louisiana or Texas has seen the last of them,” Fountain said.