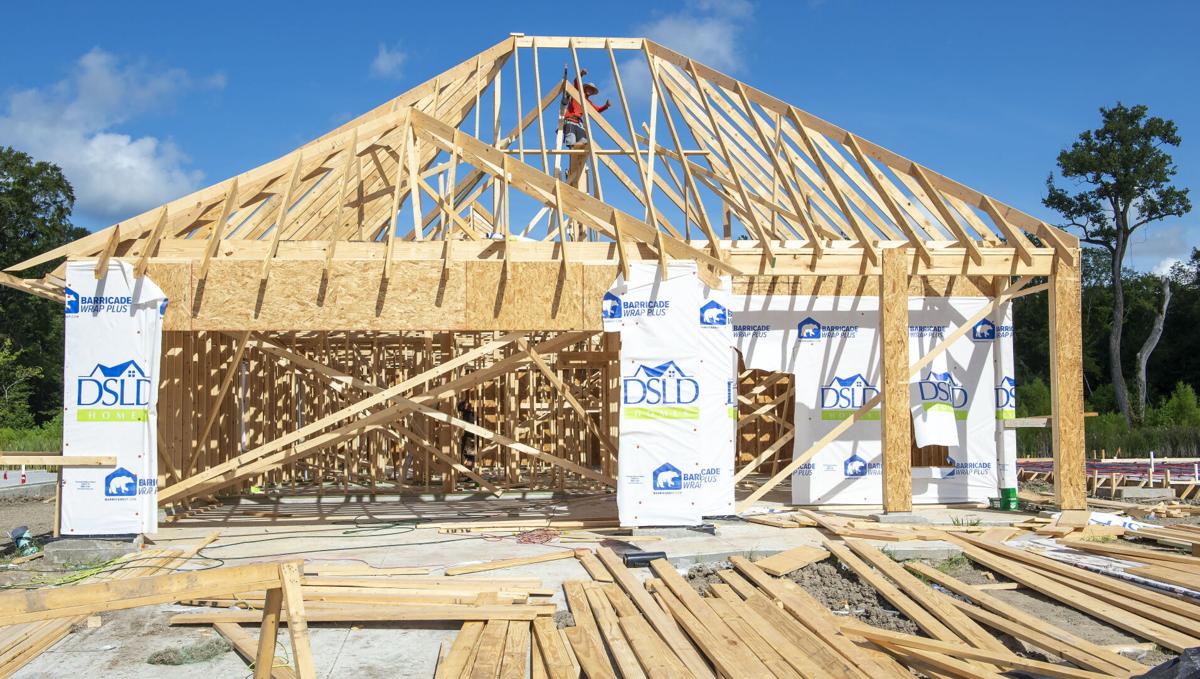 A DSLD house is being built in Hunter's Trace subdivision off Burbank Drive in Baton Rouge. An increase in lumber prices has added about 1-2% to the price of its houses for the regional homebuilder, which is still seeing demand surging across south Louisiana with historically low interest rates. 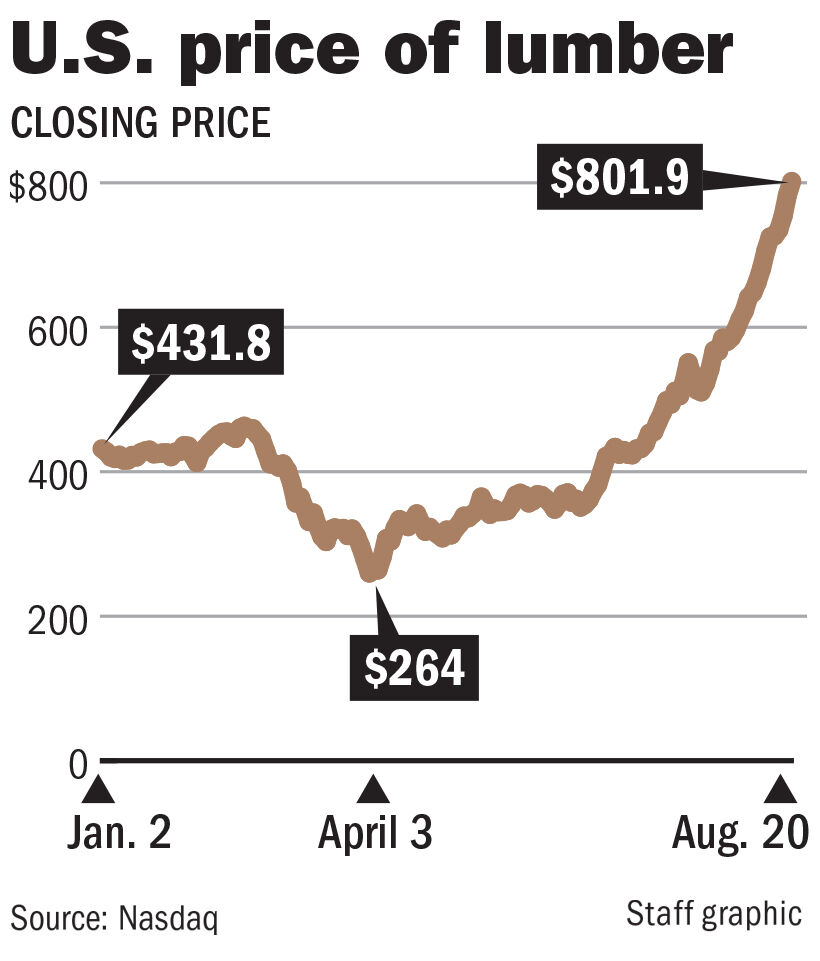 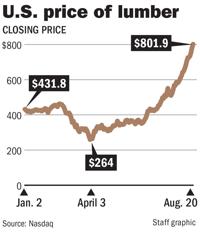 The housing market has done surprisingly well during the coronavirus pandemic, but builders are concerned that a doubling in lumber prices caused by pandemic-induced mill shutdowns is adding thousands of dollars to the cost of new homes and could dampen the industry's contribution to an economic recovery.

With lumber mills slow to reopen in an uncertain economy and demand growing for new homes and from do-it-yourself home improvement projects by people stuck in their houses, the price of lumber has jumped to about $800 per thousand board feet last week. That's up from a mid-April low of around $320 but also is well above a pre-pandemic price of about $425.

“Where we were spending $50,000 on lumber, we’re now spending $75,000,” said Chris Pike, principal and chief executive officer of Baton Rouge-based custom home contractor Canebrake Builders, which has a development underway with homes ranging from $600,000 to $750,000. “Ultimately, we have to pass the cost along to the buyer.”

He said a sheet of plywood that cost $8 in February now costs $20. Pike uses several hundred sheets of plywood on his custom-built homes, so the costs mount up quickly.

Jeff Purpera Jr., chief financial officer of DSLD, a Baton Rouge company that plans to build about 2,200 homes this year across south Louisiana, including the Acadiana and north shore areas, said he’s seen wood prices go up about 30% in the past few months. That’s raising the cost of a new home by 1% to 2%, he said. The average price of DSLD homes is about $215,000.

The National Association of Home Builders sent a letter to President Donald Trump earlier this month, asking him to reach out to domestic lumber companies and encourage them to ramp up production to meet the demand. They’re also asking the president to reopen trade talks with Canada and reach a new agreement on softwood lumber imports. The association said U.S. tariffs on Canadian lumber are averaging more than 20%.

The association noted that framing lumber prices reached a record high in late July, while oriented strand board prices earlier this month had increased 138% over the past year.

Karen Zito, president and chief executive officer of the Baton Rouge-area homebuilders association, said the housing industry can create thousands of jobs and help pull the economy forward if lumber prices are addressed.

Despite a lull in March and April because of the pandemic, which initially caused lumber prices to dip from reduced demand, the housing market has been on a roll since then. Sales are being helped by historically low mortgage interest rates that have dropped below 3% on a 30-year mortgage.

Home sales are up 3.4% in metro Baton Rouge through July, when compared with the first seven months of 2019.

In fact, new home construction has increased across south Louisiana in 2020, according to figures from the U.S. Census Bureau. The number of permits to build single-family homes were up 3% in metro Baton Rouge during the first six months of the year, compared with the first half of 2019. Metro New Orleans has seen a 6% increase in permits, and the Lafayette area is up a whopping 52%.

Buck Vandersteen, executive director of the Louisiana Forestry Association, said lumber mills were shut down in the early days of the pandemic for a variety of reasons. Some states didn't classify the lumber industry as an essential business, which meant employees were required to stay at home. Other mills shut down because of economic uncertainty because homebuilding dropped sharply in March and April.

Since then, the construction of new homes across the country has risen for three straight months and surged 22.6% in July.

"Now we're moving to another phase, more getting out and building things," Vandersteen said. "What we are seeing now is a lot of demand for building material. The mills have not been able to respond to that."

Some of the people who lost jobs at lumber mills have found other work, making it difficult to find enough people to staff facilities. And some mills, like Georgia-Pacific's DeQuincy facility in Louisiana, are still closed because of economic uncertainty, he said. The DeQuincy mill produces about 150 million board feet of lumber a year, which accounts for a small share of the 3 billion board feet of lumber all of Louisiana's mills produce annually.

Vandersteen notes that it takes several million dollars to restart a mill. So even though prices are currently high, lumber companies want to make sure the virus is under control before they make the commitment to reopen.

"Everybody wants to be sure we are seeing the light at the end of the tunnel," he said. "Even though the prices are currently high, they can change overnight."

The hope is the lumber supply will catch up with demand by the end of the year, as construction slows down in the winter and for the holidays. Future prices on the Chicago Mercantile Exchange show lumber prices at $660 per thousand board feet in January and $587 in May compared with last week's $800 rate for September.

"That will change and settle back down," Vandersteen said. "It always does."

Acadiana Business Today: The most interesting feature of the new Lafayette airport terminal? It may be the SageGlass

The most interesting feature of the new Lafayette airport terminal? It may be the SageGlass

Lumber prices on the rise because of coronavirus-induced mill shutdowns, booming housing market

The housing market has done surprisingly well during the coronavirus pandemic, but builders are concerned that a doubling in lumber prices cau…

Bon Temps Grill will move into the former location of the Blue Dog Café, the company announced Thursday.

American Airlines will drop flights to 15 cities in October; see which Louisiana cities made the cut

Who's building where in Acadiana? Here are the building permits issued Aug. 10-14

Jason Broussard has been named president and chief executive officer of Abrado, an oilfield services company that removes casing sections down…

The dwindling number of homes on the market has reached a critical point after three straight months of skyrocketing home sales in Acadiana.