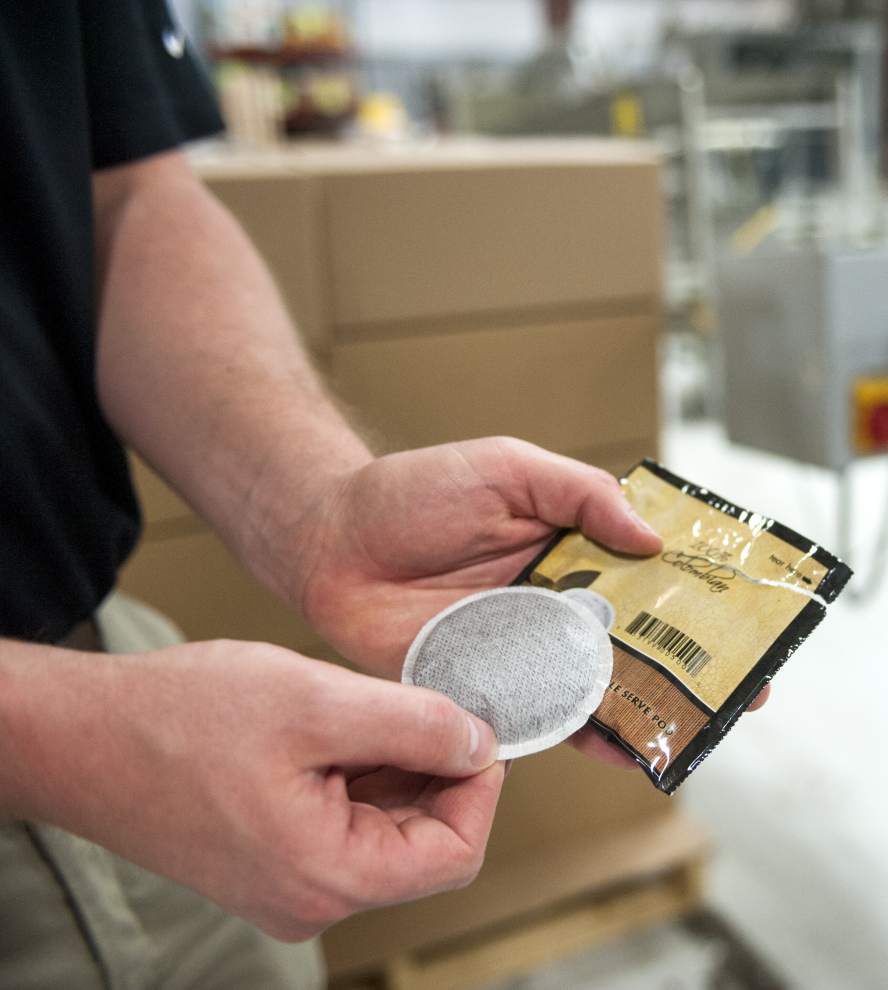 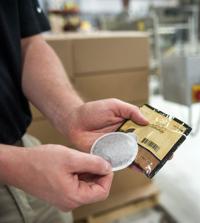 Advocate staff photo by ANGELA MAJOR -- Pod Pack made 100 million single-serve pods of coffee and tea in 2013. The business is on pace to double that total this year. 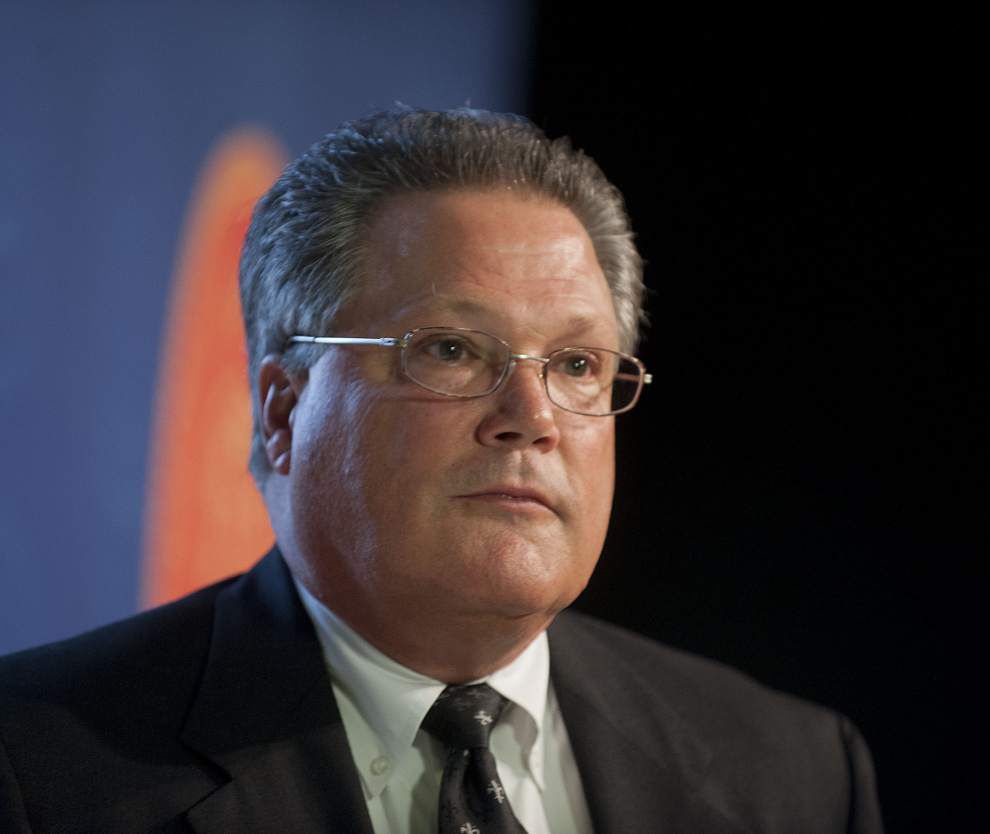 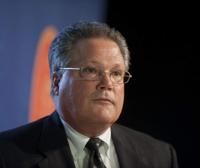 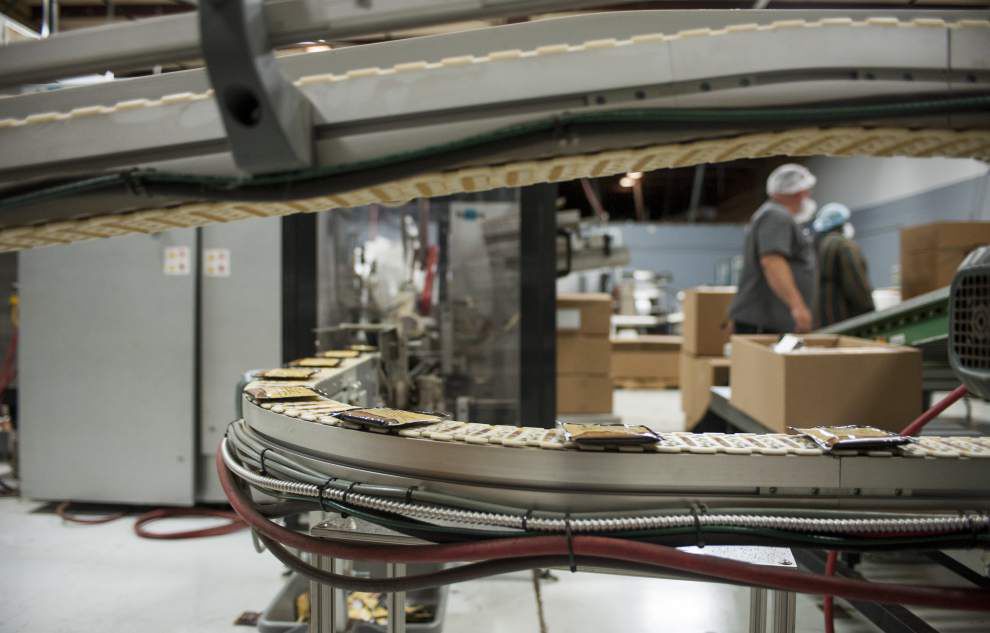 Advocate staff photo by ANGELA MAJOR -- Packages of coffee pods move along a conveyer belt at Pod Pack. The Baton Rouge-based company, which manufactures single-serving pods of coffee and tea, has seen its sales more than quadruple since 2010. 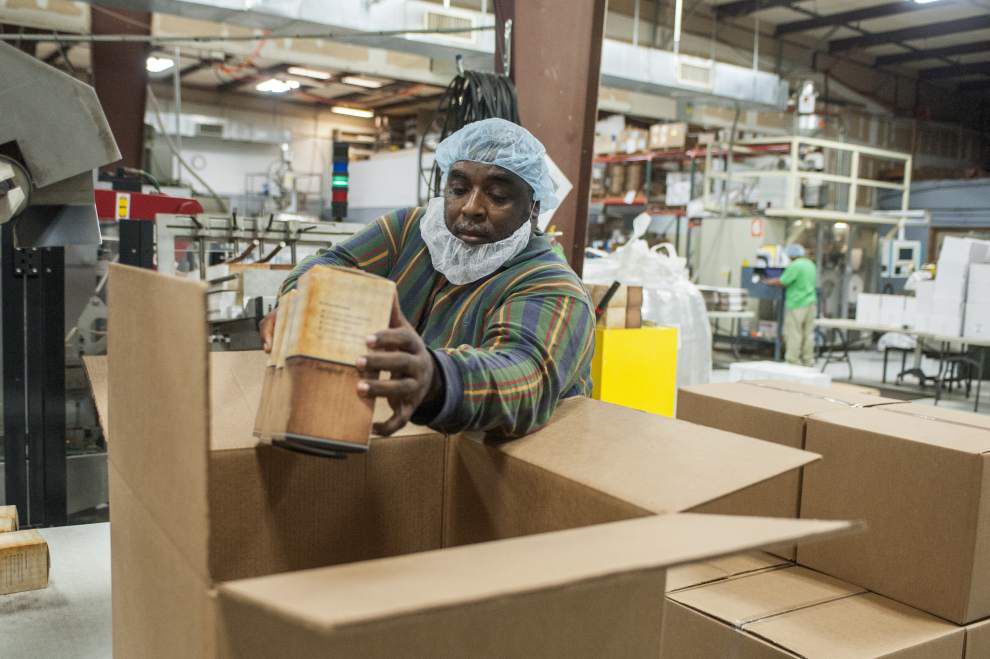 Advocate staff photo by ANGELA MAJOR -- Packaging line technician Tommie Freeman fills boxes with packages of coffee pods at Pod Pack. The company recently announced plans for a $10.1 million expansion that will lead to the hiring of 19 additional employees.

Advocate staff photo by ANGELA MAJOR -- Pod Pack made 100 million single-serve pods of coffee and tea in 2013. The business is on pace to double that total this year.

Advocate staff photo by ANGELA MAJOR -- Packages of coffee pods move along a conveyer belt at Pod Pack. The Baton Rouge-based company, which manufactures single-serving pods of coffee and tea, has seen its sales more than quadruple since 2010.

Advocate staff photo by ANGELA MAJOR -- Packaging line technician Tommie Freeman fills boxes with packages of coffee pods at Pod Pack. The company recently announced plans for a $10.1 million expansion that will lead to the hiring of 19 additional employees.

It may have taken a little while to catch on, but Pod Pack has seen rapid growth over the past few years.

The Baton Rouge-based company, which manufactures single-serving pods of coffee and tea for everyone from national brands such as Folgers and Maxwell House to local favorites such as Community Coffee and PJ’s Coffee, has seen its sales more than quadruple since 2010. Last year, Pod Pack made 100 million coffee pods.

“We do a lot of hotel brands,” said Tom Martin, Pod Pack’s executive vice president and chief operating officer. Some of the chains that use the company’s products include Starwood Hotels, Holiday Inn and some Marriott properties. “If there’s a single-cup coffee system in a hotel room, it probably uses our pods.”

Pod Pack serves as a private label packer, working with various coffee roasting companies. For example, the company is making the pods Taco Bell is now using for its recently introduced breakfast menu.

“Usually the coffee roaster figures out the blend, what they want the coffee to taste like,” he said. “They turn to us to figure out how to grind it, how much to put in the pod, to measure the extraction yield and to quantify what people are tasting.”

Unlike other companies that make single-serving pods or cups of coffee grounds, Pod Pack doesn’t sell its own brand of coffee or tea, choosing instead to concentrate on taking care of its customers.

To keep up with demand, Pod Pack announced last month it would spend $10.1 million to expand its manufacturing facility on Industriplex Boulevard.

“It just seems like an overnight success,” said Martin, sitting back in an office that has the strong warm scent of coffee beans.

Martin and Bill Powell, Pod Pack’s president and CEO, started the company in the mid-1990s. Martin had just left Community Coffee after spending 11 years with the company, and Powell had just sold his business, which made coffee filters.

At the time, there was a demand from restaurants for single-cup espresso machines. The restaurants were investing in the machines in order to keep diners at their table and not heading out to a nearby coffee shop for an after-dinner drink.

“We knew people were buying these espresso pods, and we decided we could do it better,” Martin said. At the time, the pods were coming from Europe and the Northeast, so the thinking was Pod Pack could establish itself out of the South.

Martin said he and Powell had no idea how big the market was for espresso pods.

“We really didn’t have a clear picture of what we were getting into,” he said. “We had a concept that single-cup brewing would be something in the future.”

The business opened in 1996 in New Orleans. Pod Pack started in the Crescent City because it was the largest green coffee port in the U.S.

“Our idea was that roasters would go down to New Orleans and pick up green coffee and drop off roasted whole beans for our pods,” Martin said. “But that only worked for one customer.”

In 2000, Pod Pack moved to Baton Rouge to take a suite on Industriplex Boulevard. The move worked for Martin, who no longer had to commute from his home in Baton Rouge to New Orleans. And Powell is based in New Jersey, so he wasn’t affected.

Since then, the business has spread to take up one entire building in an office park.

Pod Pack would not release sales figures, but Martin said annual revenue doubled from 2012 to 2013 and is on track to double again this year.

That tracks the rapid growth of the single-serve coffee business. In 2010, 4 percent of coffee drinkers were brewing single cups of java. That number has grown to 29 percent of the coffee market, Martin said.

“People are predicting 20 percent growth in single-cup brewing over the next four to five years,” Martin said. “That’s significant.”

Pod Pack has seen that growth happen, even though the company has concentrated on making coffee pods and not the more popular single-serve cups.

While the single-serve cups work by having a high-pressure jet of water pumped through a foil covered plastic container, the pods sold by Pod Pack are coffee grounds wrapped in a filter.

Not only does this lead to a better tasting cup of coffee, but the pods are 10 to 15 cents cheaper than a single-serve cup and more environmentally friendly. “Only 10 percent of the product right here isn’t biodegradable,” Martin said.

Mintel, a market research firm based in London, said in 2013 U.S. consumers spent $3.1 billion on single-cup coffee and $6 billion on traditional roasted coffee. But by 2018 the company expects the gap between single cups and roasted coffee will be down to $1.4 billion.

The change is largely being driven by convenience, Martin said. Customers are even willing to sacrifice the quality of making a full pot of coffee for the ease of a single-serving cup, he said.

As part of the new expansion, which will add 19 employees to Pod Pack’s staff of about 25, the company will install a machine that packages single-serve cups of coffee.

“Our customers consider us to be the experts, and they were saying ‘Hurry up and get in the cup business, we don’t want to deal with anybody else,’” Martin said. “That makes me confident buying a cup machine will work out.”

The expansion will bring the size of Pod Pack’s operations to 60,000 to 100,000 square feet — Martin is still determining how big he wants to go.

“You can’t guess how long this growth is going to continue,” he said. “It’s a little overwhelming what we should do, but you don’t want to miss a growth opportunity.”