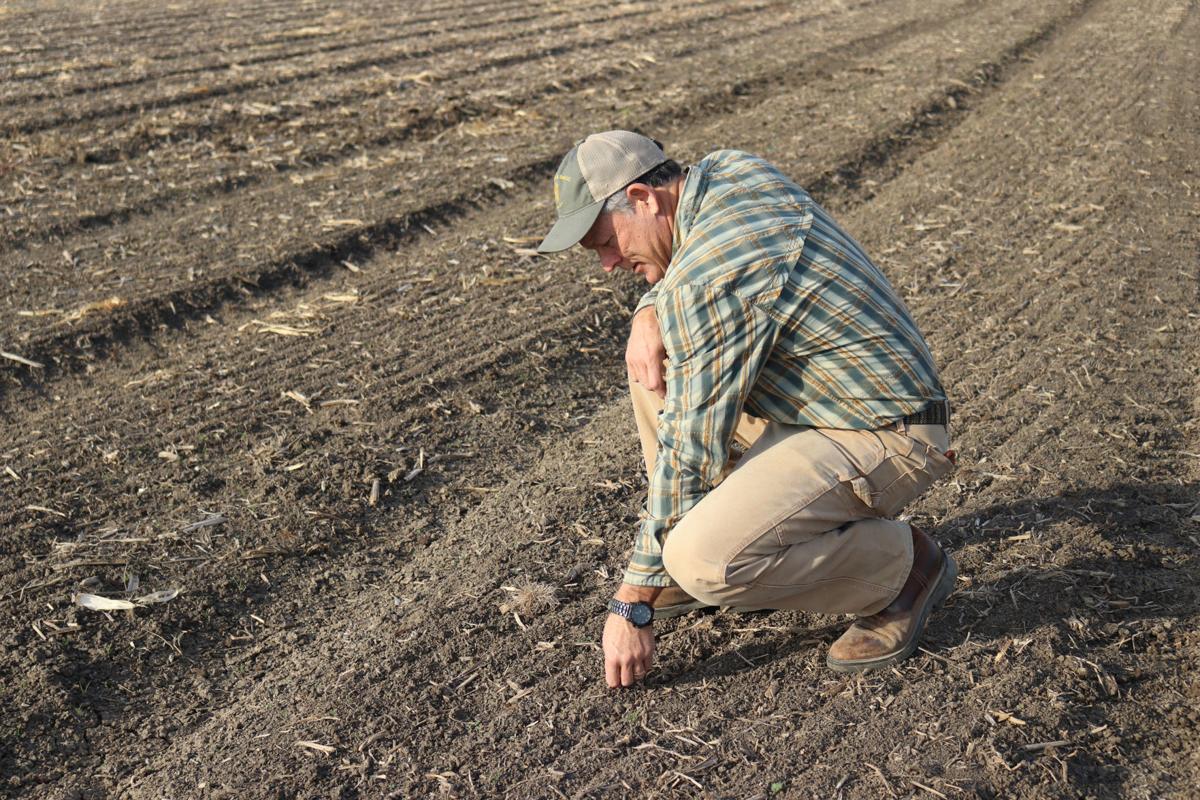 Donald Schexnayder kneeled down on a soy bean field ready for next year crop at R. Schexnayder & Sons on Friday, November 22, 2019 in Port Allen, La. 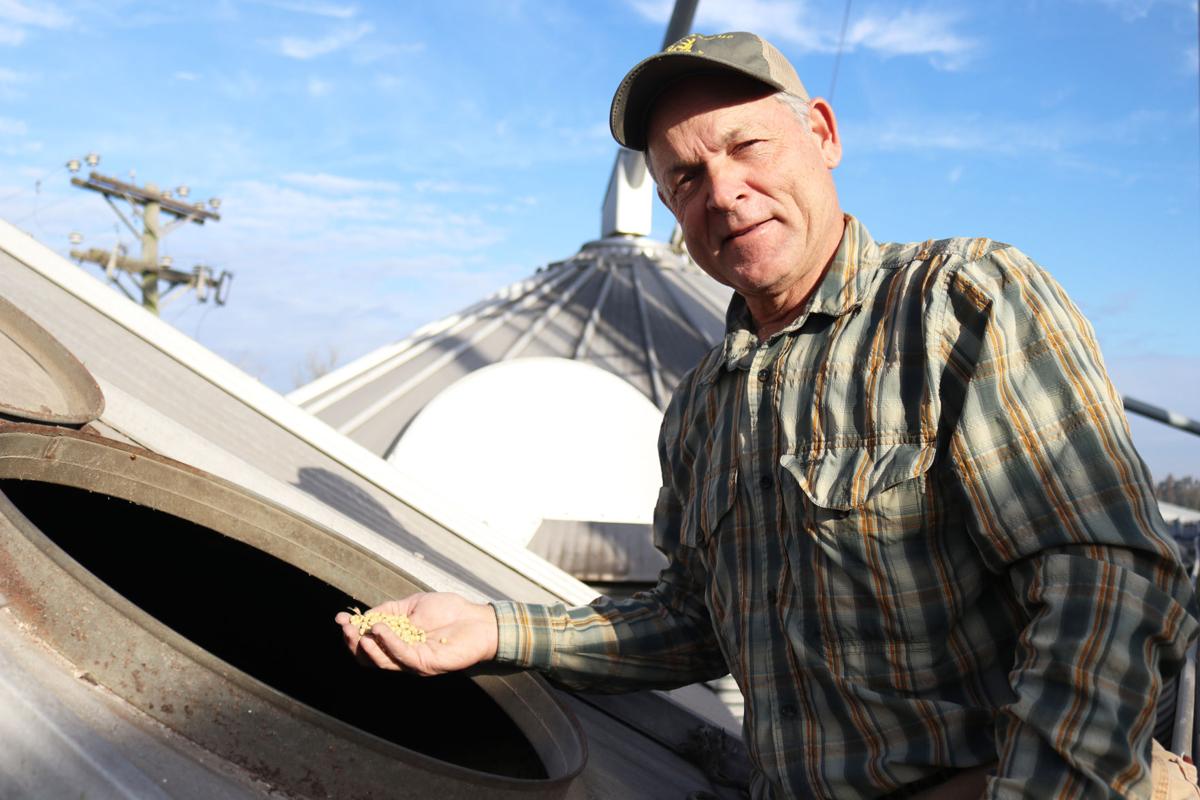 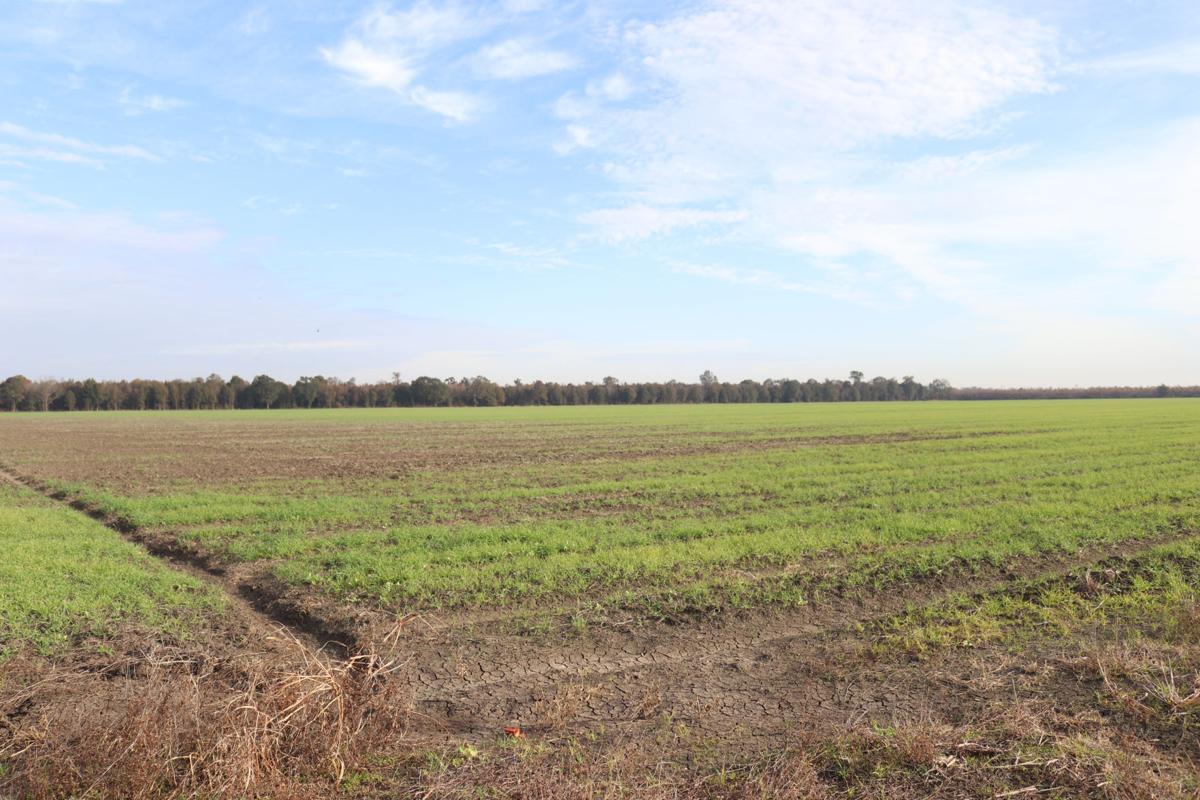 Field of wheat with flood damage to the left at R. Schexnayder & Sons LLC on Friday, November 22, 2019 in Port Allen, La. 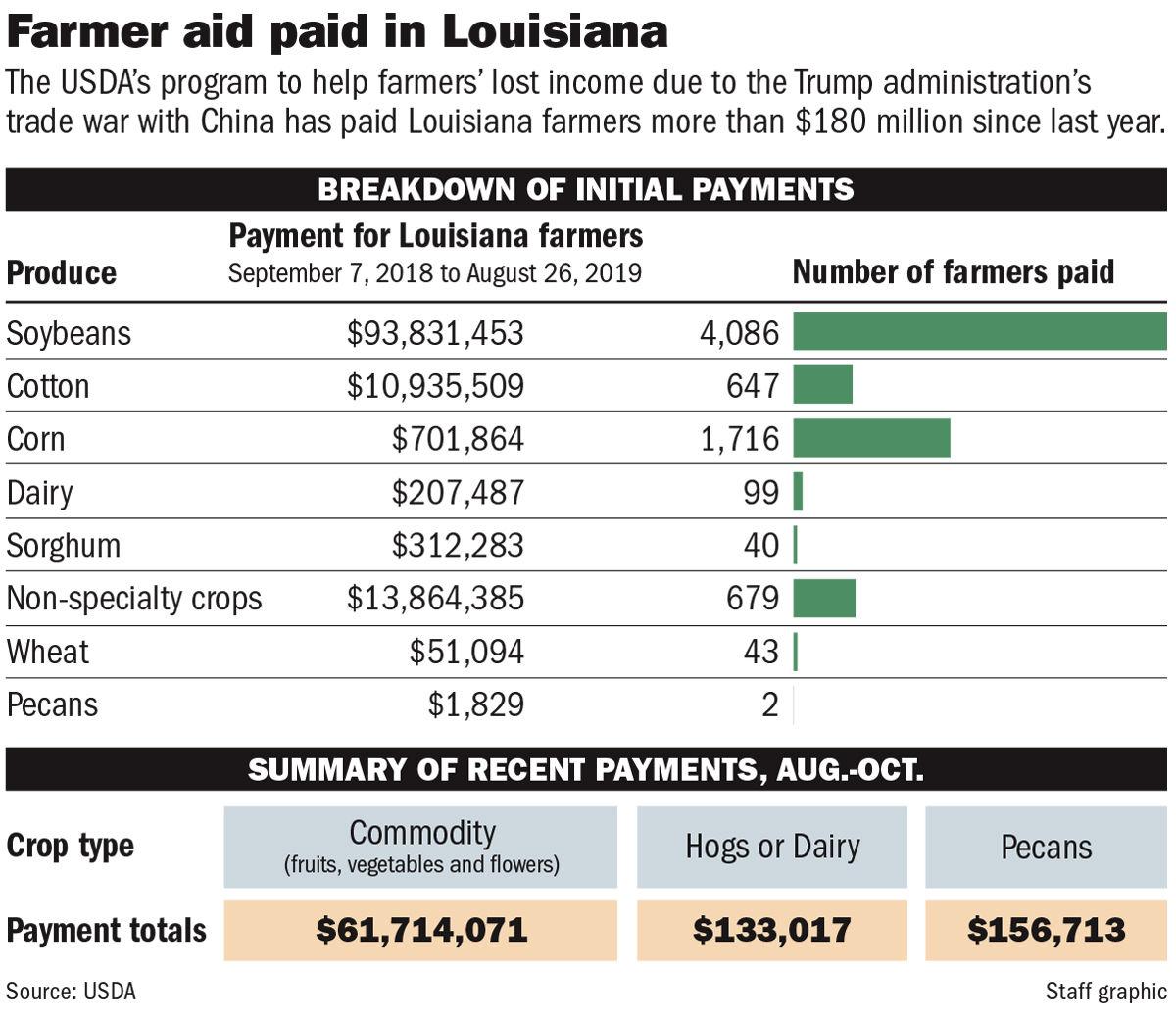 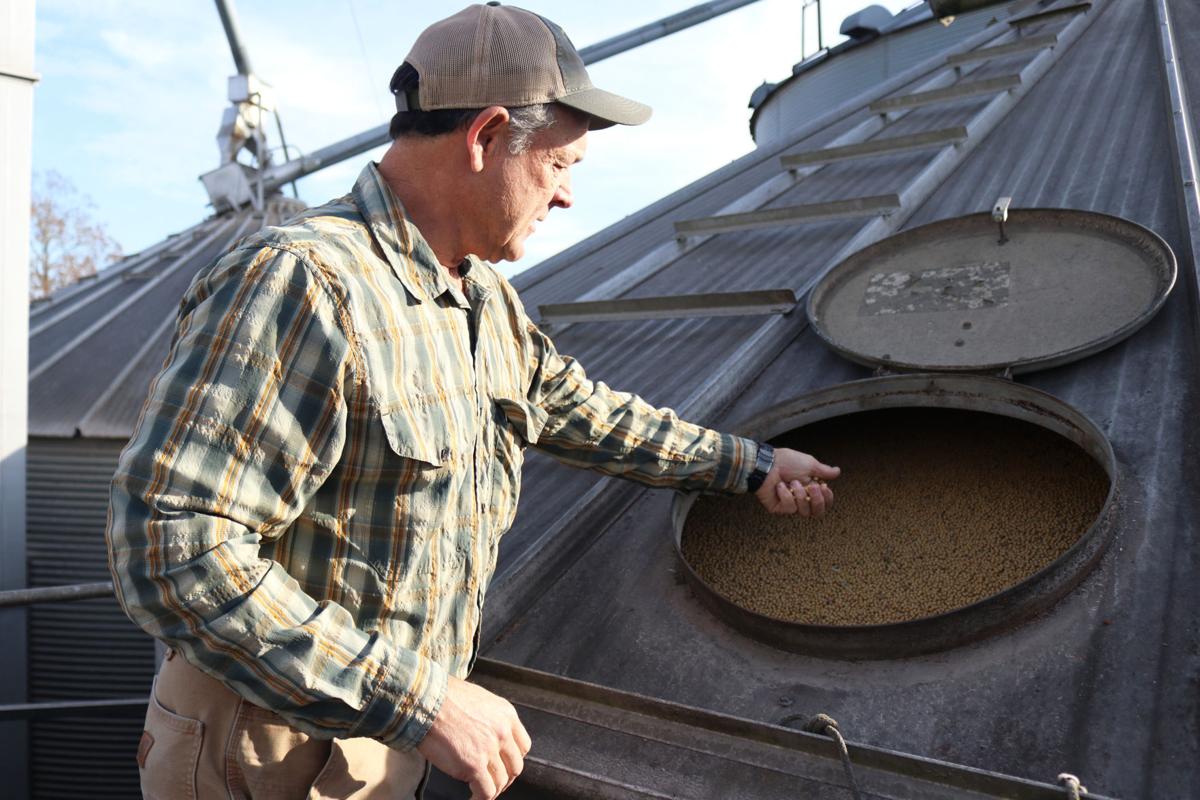 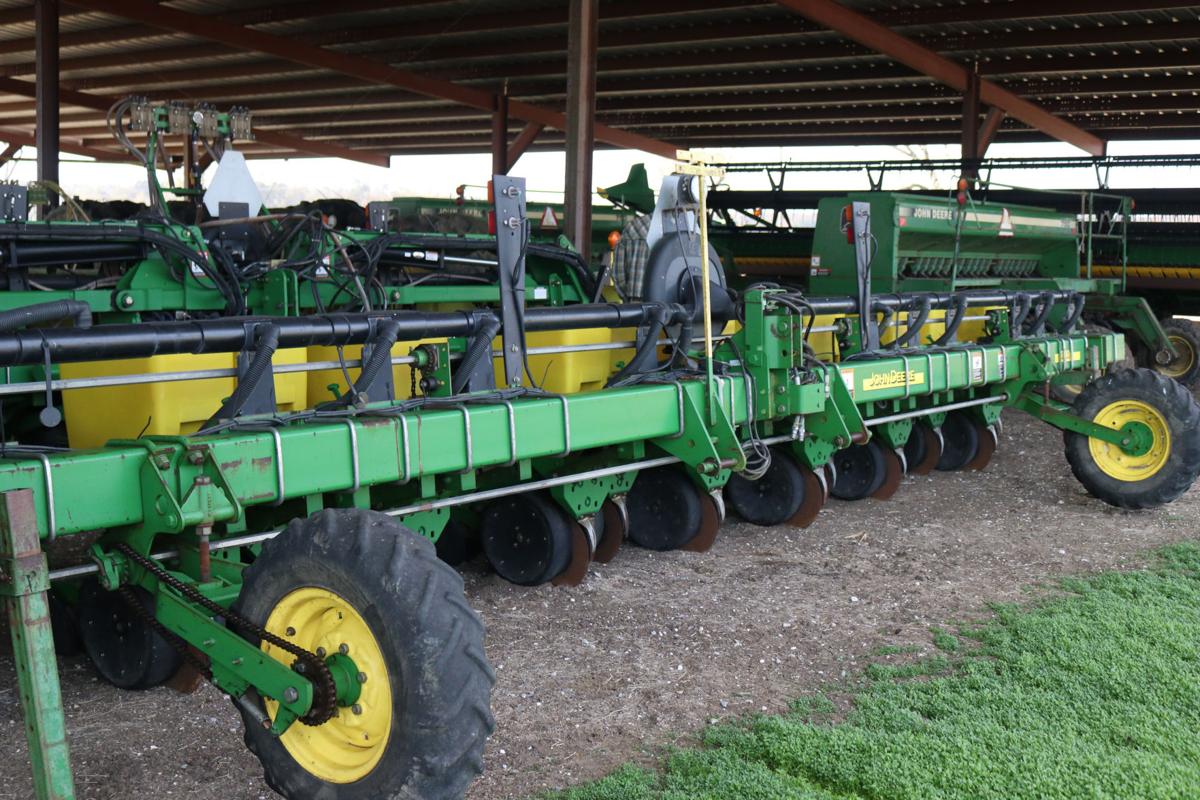 Donald Schexnayder kneeled down on a soy bean field ready for next year crop at R. Schexnayder & Sons on Friday, November 22, 2019 in Port Allen, La.

Field of wheat with flood damage to the left at R. Schexnayder & Sons LLC on Friday, November 22, 2019 in Port Allen, La.

The trade war between the U.S. and China is forcing many Louisiana farmers to question whether they’ll continue to grow soybeans next year as the federal aid package keeping them afloat by offsetting their losses isn’t covering all their costs.

Across the state, farmers have collected more than $180 million since the federal government rolled out its program to make up for a steep slump in soybean sales after China, the biggest buyer of American soy, raised retaliatory tariffs for several U.S. agriculture products last year.

More than 75% of that aid went to Louisiana soybean farmers, who have suffered the most under the trade war, according to U.S. Department of Agriculture figures obtained through a Freedom of Information Act request.

But the program isn’t enough to cover farmers’ costs, some say, even though it’s aimed to pay what they would have made absent the trade war.

“It’s a Band-Aid,” Charles Cannatella, who grows soybeans on his family’s farm in St. Landry Parish, said of the federal program. “We need our markets back. That’s the only way we can have certainty.”

Soybeans are a major agricultural product in Louisiana with a farm value of $800 million, second only to sugar cane.

President Donald Trump, fulfilling a campaign pledge, launched the trade war in early 2018 by raising tariffs on foreign steel and other items to force China to change what he described as unfair trade practices and theft of American intellectual property.

China, which historically bought about 60% of Louisiana's soybeans, slapped a 25% tariff on American soy products in 2018, forcing many farmers to hold onto their cache of beans and wait until they could find better prices.

Others, who lacked the physical space to squirrel away their beans or were under contract commitments, had to sell them for whatever they could get on a transient market or plow them into the ground after rains ruined their crop

Within a few weeks of China raising import tariffs, soybean prices plunged to under $9 per bushel last year — a price seen as a break-even point for most farmers. Prices hit their lowest point this May, selling at around $7.80 per bushel.

The U.S. Department of Agriculture launched its Market Facilitation Program following the ongoing trade disputes between the U.S. and China. The agency doled out $12 billion in 2018 and authorized an extra $16 billion for 2019.

More than 7,000 Louisiana farmers are enrolled in the program. Payments are based on several factors, such as the acreage of a farm, the type of crop and the location.

With roughly five weeks left in a "timeout" truce between the U.S. and China in their tariff wars, soybean farmers in Louisiana and elsewhere …

Production and yield of Louisiana soy crops are expected to drop this year, with USDA forecasts estimating a 29% decline from 2018, mirroring a national trend.

Louisiana Agriculture Commissioner Mike Strain noted soybean acreage, at about 1.05 million acres this year, was down 290,000 acres from a year ago and down 80,000 acres from planting intentions released in March.

Strain is bullish on the prospects of trade talks and said once agreements are signed, “you’ll see a big jump in soybeans.”

“With all these different trade deals coming into play, once they’re signed you’re going to see commodity prices increase,” he said.

The MFP program has been criticized by some members of Congress and other observers who question whether the payments benefit larger farms over smaller farms that aren’t able to absorb financial hits.

Strain said he believes the MFP program equitably pays farmers by giving them between $15 and $150 per acre, depending on the county or parish.

"The big get bigger, and these subsidies are really part of that problem," Schechinger said.

Condrey Farms in Lake Providence, as well as Thornton Farms and JBF Partnership, in the nearby East Carroll Parish community of Transylvania, for example, collected more than $500,000, the most in the state through the first and second round of payments in 2018. Meanwhile, some farms received payments of as little as $2 in that time.

Defenders of the MFP program say larger farms have higher costs because of their size, and the USDA's criteria of being actively engaged in farming ensure that farming partners are also paid.

A miserable growing season plagued by heavy rains and flooding has added another blow to Louisiana's soybean industry amid the political uncertainties of a trade deal.

Constant downpours during last fall’s harvest damaged late-maturing soybeans to the point some fields were lost. A frosty planting season and heavy downpours meant farmers have to replant much of their crop this spring.

“I’ve been farming for over 50 years, and this is the worst season I’ve ever had,” said James Guillot, a soybean farmer in Avoyelles Parish already recovering from an off-year in 2018.

In a normal year, John Good can easily handle a rainy harvest season for his 1,300 acres of soybeans in Pointe Coupee Parish.

Commercial grain elevators had fewer healthy soybeans to blend with damaged ones, leaving many without a place to go.

Guillot and other farmers who have benefited from the multi-billion dollar aid package say the money has helped them weather an even worse storm. But he worries about the reliability of a government program that’s susceptible to political machinations.

For Ricky Rivet, who grows sugar cane, soy and other products on his farm in Morganza, the drop in soy prices has made him question whether he’ll grow as much next year.

He’s made just more than $45,000 for his soybeans through the MFP program, an amount he says helps but doesn’t quite cover all his costs. Next season, he’s considered planting more sugar cane and fewer soybeans. “There’s more money in sugar than beans,” Rivet said.

But changing the type of crops farmers grow is tricky.

Donald Schexnayder, who farms soy, corn and oat on his farms in Port Allen and in Pointe Coupee Parish, said it's an enormous risk for farmers to hedge bets on what they believe commodities prices will be in the several months between planting and harvesting.

"We don't try to jump in and jump out. You don't know what it's going to be next year," Schexnayder said. "It's like rolling the dice."

Cannatella said he understands and, in many ways, supports the Trump Administration's trade war with China. He points to allegations that China has in the past stolen American farming technology and, at times, imposed unfair trade practices, including suspicious impounds of American cargo.

Still, the Chinese soybean market had paid off big for the soy industry.

Farmers spent a lot of energy and often their own money nurturing relationships with Chinese buyers over several decades, only to see their efforts disappeared nearly overnight, said Cannatella, who is also a member of the United Soybean Board, the national trade organization that promotes soy production.

Farmers have in past months turned to other countries, including the European Union and even some exports to Egypt, for their soybeans. Those increases haven’t come close to making up for Chinese sales, though, said LSU AgCenter agricultural economist Mike Deliberto.

He points to the sluggishness of prices as a result of soy producers across the country growing far more than they could sell. Leftover beans get carried over for years, essentially raising the supply but not the demand just as China raised tariffs.

"It's kind of being hit by both hands: a left hook and a right hook with the soybean market,” Deliberto said. “It was a bad situation for price rallies because they were limited.”

The threat of a worsening trade war with China is looming large for Louisiana, especially for farmers who are also facing another wet planting…

China recently has turned to countries like Brazil for their soy exports after the Trump administration raised tariffs on steel and other Chinese goods.

As farmers await action on a trade accord, federal data shows the Asian country has slowly started importing American soy products in recent months following the year-long feud. Soybean shipments to China rose 23% this year after it made some exemptions for some American agriculture products, USDA figures show.

Many Louisiana farmers have planted other crops to make up the difference, Strain said, a trend he also faults on bad weather that’s piled on problems with the trade war. “You’re not going to see an economic collapse” if trade agreements falter, he said.

But others are wary about the long-term impacts for the farming industry as the second year of the trade war nears.

"Even if we get a trade deal with China next year, this is still something that tends to have an impact on crop prices and acres grown beyond just this year and last year," Schechinger said.

The House of Representatives is now moving into the next phase of the impeachment of Donald J. Trump, and after reams of damning and corrobora…