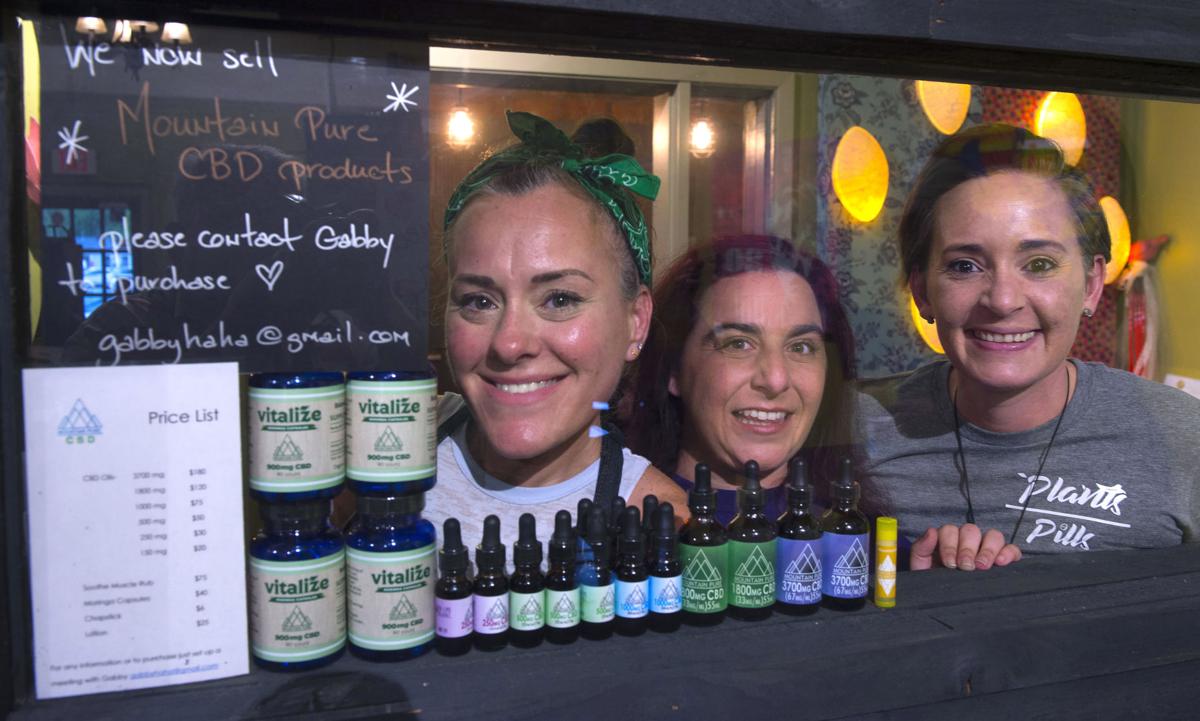 Gabby Loubiere, left, owner of Brew Ha Ha, is with Heather Carter and Natalie Ourso, co-owners of the Baton Rouge company Mountain Pure, which makes CBD products like those on display in the window. 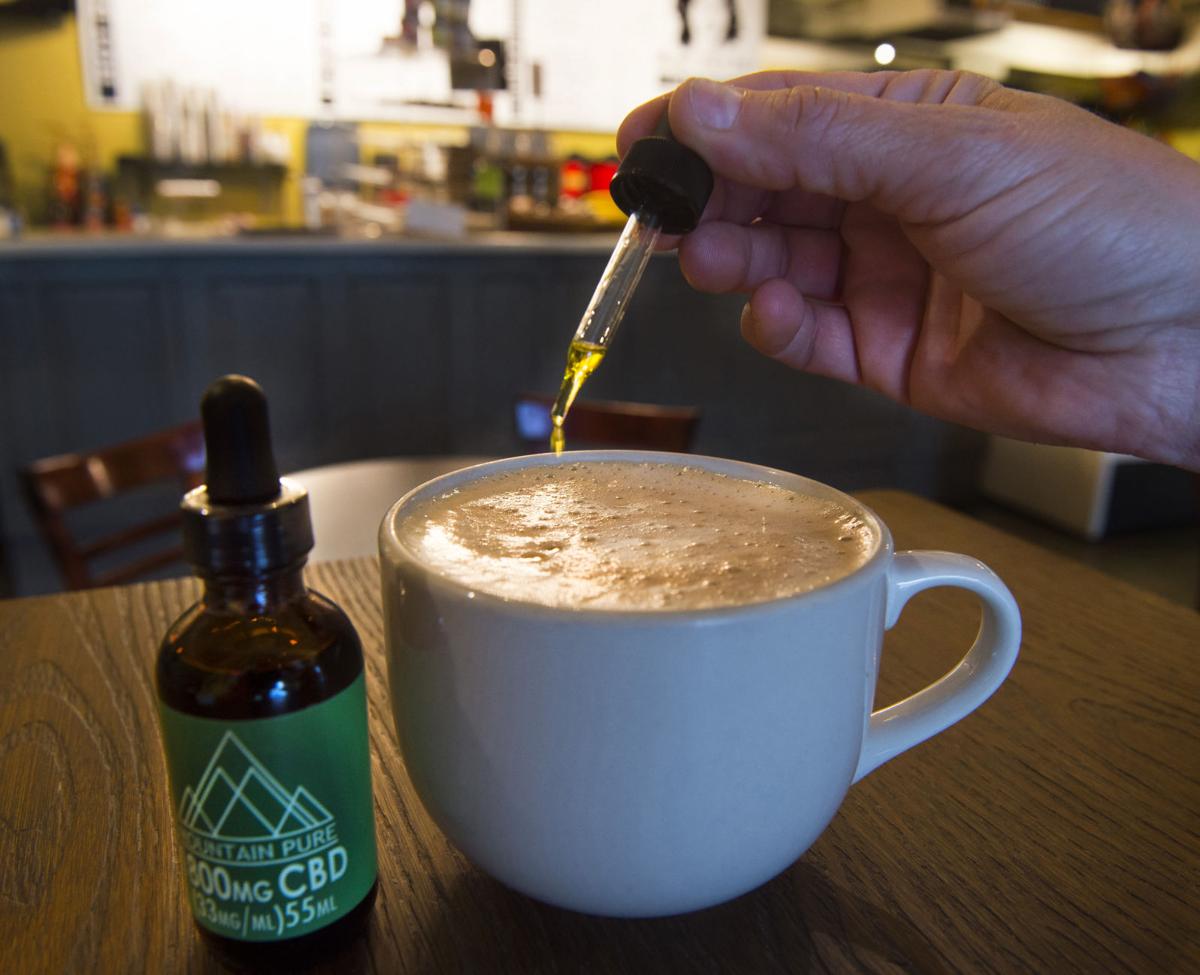 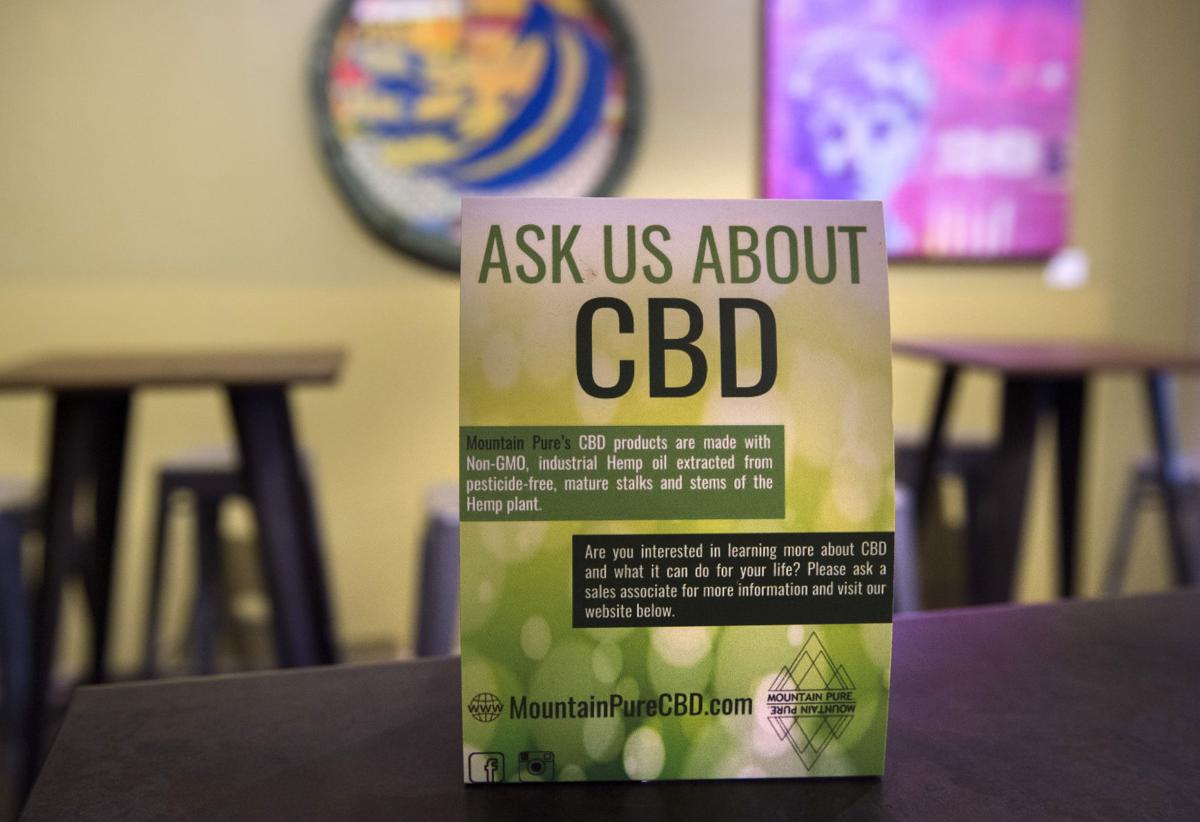 A sign displays information and web resources about CBD products from the Baton Rouge company Mountain Pure on a table at Brew Ha Ha coffee shop, which sells them. 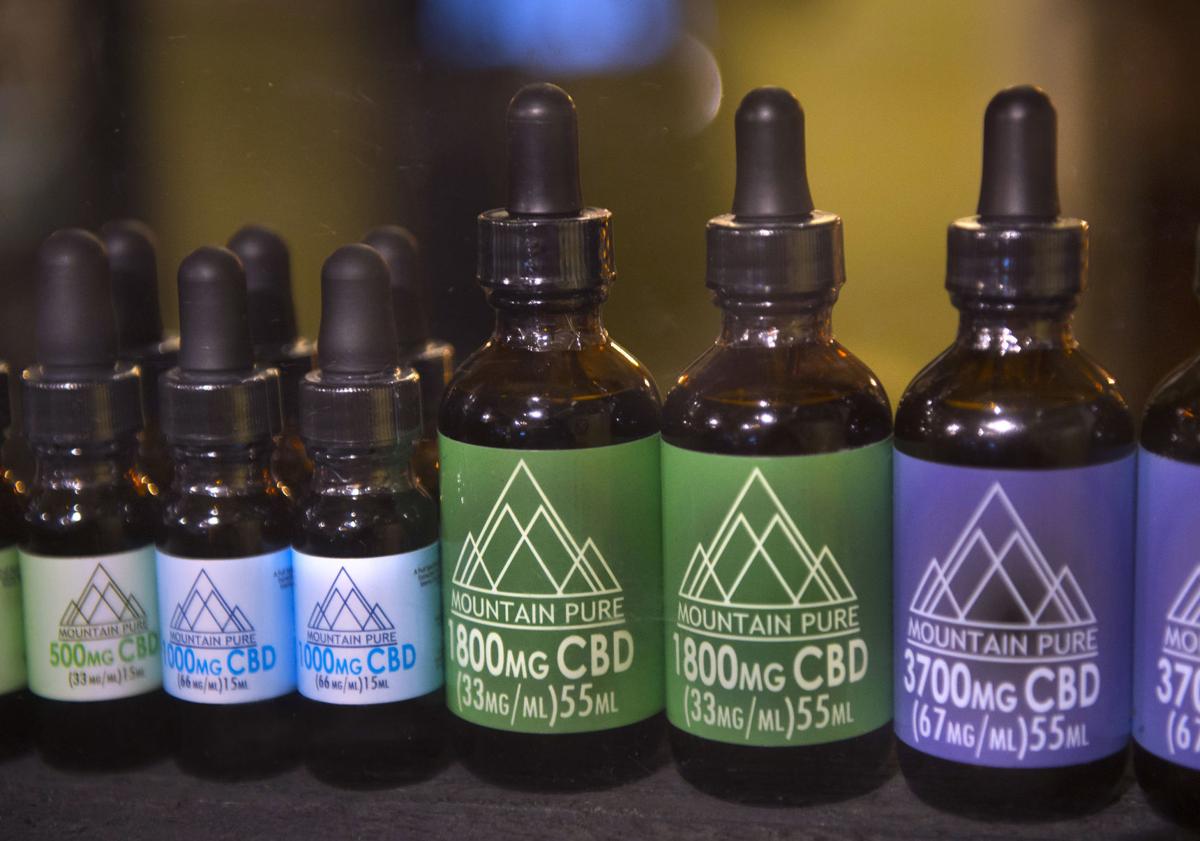 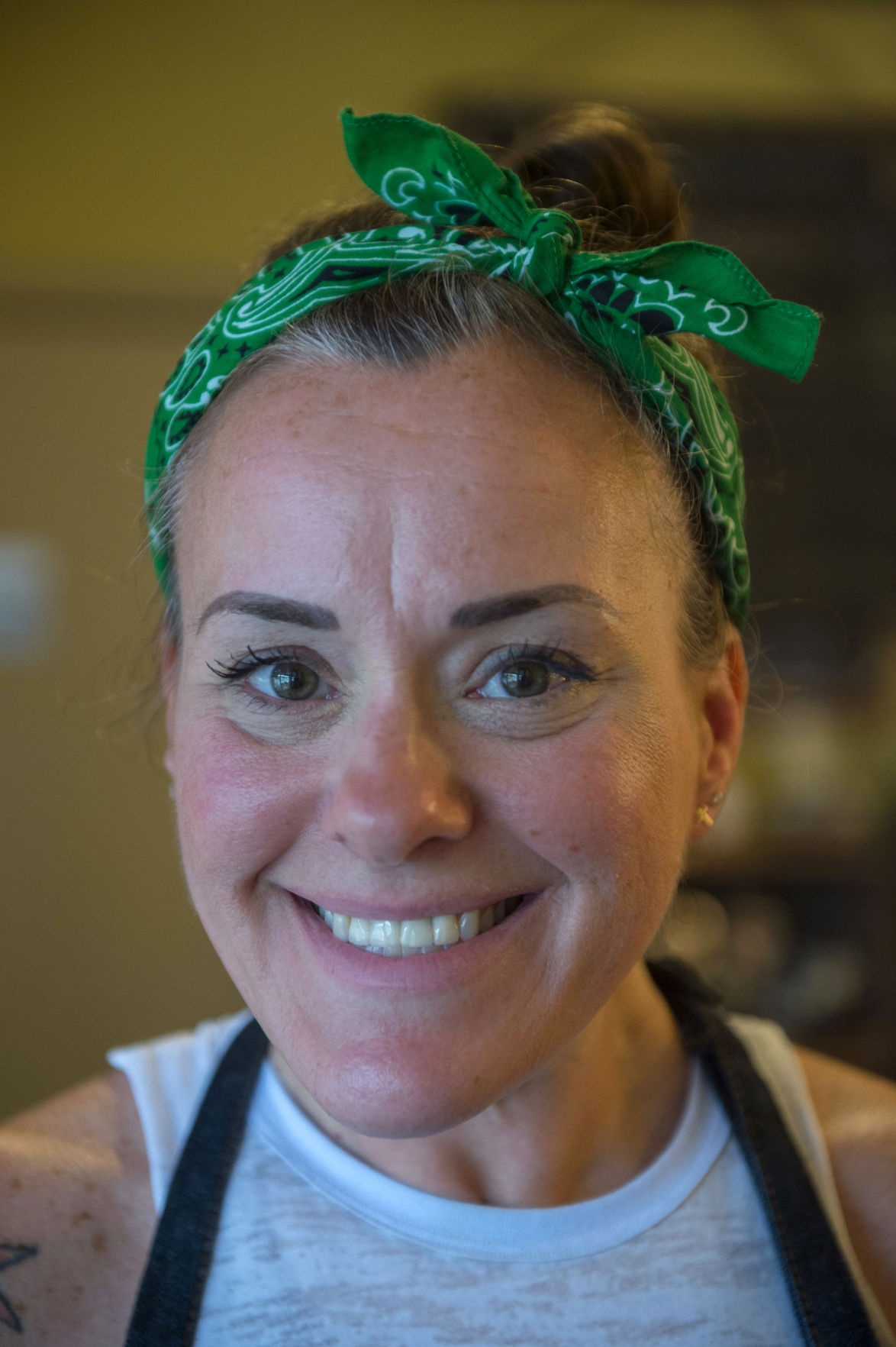 Gabby Loubiere, left, owner of Brew Ha Ha, is with Heather Carter and Natalie Ourso, co-owners of the Baton Rouge company Mountain Pure, which makes CBD products like those on display in the window.

A sign displays information and web resources about CBD products from the Baton Rouge company Mountain Pure on a table at Brew Ha Ha coffee shop, which sells them.

Gabby Loubiere, the owner of Brew Ha Ha, has been selling tinctures, capsules and even lip balm infused with CBD — made by a local company called Mountain Pure CBD — since last year.

CBD, or cannabidiol, is the non-psychoactive compound found in the cannabis plant, and Loubiere said she tried it after a frustrating bout of mysterious health problems. Within three days, she said she felt “so much better.”

Loubiere isn’t the only one to tout CBD as having health benefits. In recent years, CBD has exploded in popularity in the United States, finding its way into drinks, lotions, oils, gummies and even dog treats.

So popular are the products that Louisiana lawmakers this year could key off federal farm laws in a move to legalize the growth of hemp, the plant from which CBD is extracted for many of those products. That could open up a potentially lucrative market to the state’s farmers.

But one vexing question remains in Louisiana: Are people allowed to sell or use CBD here?

That question elicits a range of differing answers, depending on who's commenting on its legality — and it’s not clear that the hemp legislation being proposed will do much to clear up that issue.

Hemp and marijuana are both from the Cannabis sativa species of plant, according to the Congressional Research Service, but are genetically distinct from one another, featuring different uses and chemical compositions. Hemp has no more than 0.3% THC, the component of cannabis that gets users high. Unlike marijuana, hemp is used in a range of products from the CBD merchandise that businesses are selling to industrial goods. Until recently, U.S. laws even restricted the growth of hemp.

In recent months, two government agencies in Louisiana, the Board of Pharmacy and the Louisiana Office of Alcohol and Tobacco Control, have issued public notices suggesting CBD is illegal in Louisiana.

The Board of Pharmacy’s notice, which was directed at pharmacies, said outright that CBD is illegal, though the agency told its licensees that it did not have plans to take any enforcement actions to back that claim.

We're one week away from the start of the 2019 Louisiana Legislative Regular Session with several hot button topics up for debate.

“I’ve been in business 15 years,” she said. “I’m not going to risk getting shut down for selling some CBD oil.”

The state Office of Alcohol and Tobacco Control went as far as telling its permit holders — places like smoke shops and liquor stores — that it will start issuing citations to those that sell CBD products.

Those decrees led to a wave of confusion, and headlines suggesting the sale of CBD would be stopped in the state. That will likely be true of ATC permit holders, who face the threat of citations if they don’t remove CBD products from their shelves.

However, CBD can still be found at retailers across Louisiana, and products are even more abundant at online sellers — including local ones like Mountain Pure, which is based in Baton Rouge.

After consulting with local law enforcement, Loubiere returned the products to her coffee shop’s shelves. Law enforcement appears unwilling to crack down on something that has little in common with marijuana other than the fact that it comes from the same species of plant.

Both the Louisiana Sheriff’s Association and the District Attorneys Association said they are unaware of any enforcement actions taken against people who sell or use CBD, as long as the products don’t contain otherwise banned substances.

But advocates of CBD products say nothing is being done to clear up the confusion surrounding their industry, thrusting it into a legal gray area, even as the proponents of CBD say their products are, in fact, legal under current law.

CBD, or cannabidiol, is a non-psychoactive component of Cannabis sativa, the species of plant that both marijuana and hemp come from. Extracted as an oil, CBD is sold in tinctures, gummies, cookies and even dog treats. It has grown in popularity in recent years, and many proponents say it offers health benefits.

The compound can be extracted from both the marijuana plant and the hemp plant. Hemp does not contain enough of the psychoactive component — THC — to get users high. CBD oil extracted from hemp is virtually free of THC.

The U.S. CBD market was worth about $350 million last year, according to CNBC, triple the amount sold in 2014.

The legal status of CBD is muddy. Proponents in Louisiana say it is legally distinct from marijuana, and therefore legal if it contains no THC. Chaunda Mitchell, director of drug policy for Gov. John Bel Edwards, said she believes CBD products are illegal under the Louisiana Controlled Dangerous Substance Law.

The Food and Drug Administration has said it can’t be added to food or sold as a dietary supplement, though it is only cracking down on companies making false health claims.

The Louisiana Board of Pharmacy issued guidance to its licensees saying CBD oil is illegal. The Louisiana Office of Alcohol and Tobacco Control has started cracking down on its permit-holders that sell CBD products. Other law enforcement agencies in Louisiana appear to have made no moves to crack down on pure CBD products.

Friends Natalie Ourso and Heather Carter started making CBD products about two years ago in Baton Rouge and have built up a solid list of retailers where they now sell products like oils, lotions and capsules. Their company, Mountain Pure, sells products through coffee shops like Brew Ha Ha, but also places that are licensed by the Office of Alcohol and Tobacco Control that are now pulling the products from their shelves because of the ATC's decree.

Carter said about a third of her business is done through stores licensed by the ATC. “We’re fine,” Carter said. “We’re still moving forward, but that’s a brutal hit to a small company when 30% of your stores say, ‘We can’t sell this anymore.’ ”

Carter said she’s trying to tell customers she is still open for business online and at other retailers.

The Louisiana ATC would not answer several questions clarifying its recent advisory notice, but spokeswoman Michelle Burks-Augustine said even CBD products containing 0% THC are illegal in the state.

Mitchell also said she’s unaware of any enforcement action outside of the ATC’s advisory notice.

Mike Ranatza, head of the Louisiana Sheriffs’ Association, said the association has not vetted the issue in depth. And while some sheriffs have run into issues with products advertised as CBD that test positive for THC — the psychoactive component of marijuana — he said he is unaware of any actions taken against pure CBD products.

Ranatza also said he has expressed some concerns with bills legalizing hemp because he wants to be completely sure legislation won’t loosen laws surrounding the human consumption of THC.

“What’s apparent to me is the need for education on this matter,” Ranatza said.

Pete Adams, head of the state’s District Attorneys Association, said he hasn’t talked about the CBD issue with the state’s prosecutors, and he’s unaware of any prosecutions for the possession or sale of CBD products.

“If it’s against the law, and law enforcement brings an arrest, I suppose they’ll look at it,” he said. “It just hasn’t come up for discussion.”

State Rep. Clay Schexnayder, R-Gonzales, has filed one of the bills that would pave the way from farmers to produce industrial hemp, as authorized by the federal farm bill.

“Throughout the history of America, industrial hemp has played a vital role in agriculture,” Louisiana Agriculture Commissioner Mike Strain said in a statement announcing his support of the bill. “Reintroduction of this commodity will provide new opportunities, especially for our small to mid-sized farmers.”

The attitude toward hemp changed with the 2014 federal farm bill, allowing for research of hemp, but not commercial distribution. Last year, Congress passed another farm bill that set hemp apart from the federal controlled substances act, paving the way for widespread growth and sale of hemp products.

That could lead to as many as 1,000 people in Louisiana signing up to grow hemp, Strain estimated, and eventually enter interstate commerce with the commodity.

State agriculture departments will have to enter into an agreement with the feds, and be approved by the United States Department of Agriculture, which Strain said should have rules written for the program by early next spring.

To even jump through those hoops, though, Louisiana needs to pass a bill that repeals the prohibition against hemp, Strain said. If that happens, farmers will have to be licensed, the seeds must be approved, and when they grow it, Strain’s office will need to inspect it.

Strain said the department will have to test for THC levels in crops shortly after harvesting and “seize and destroy” anything with a THC content that is above the 0.3% threshold.

All of that is separate from the state’s medical marijuana program, which has been delayed several times. Southern University and LSU have both hired private partners to grow marijuana for sale in the form of tinctures eventually at up to 10 state-approved pharmacies around Louisiana.

As for Schexnayder’s bill proposal, district director Gina Duhe said, “As of right now the legislation does nothing with CBD products.”

“I’ve been increasingly let down by our state in the past month,” said Carter, of Mountain Pure CBD. “I don’t think people understand how much the local people are involved in the CBD community.”