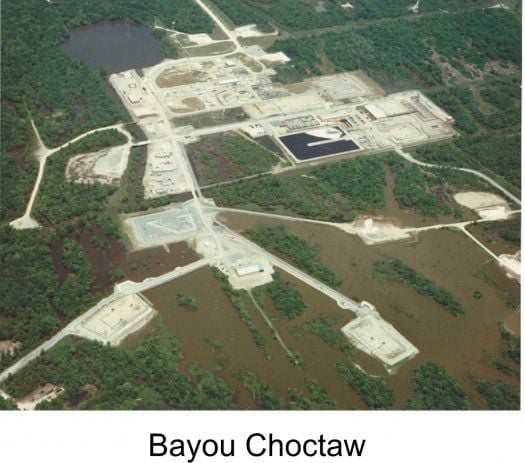 The Bayou Choctaw Strategic Petroleum Reserve is a crude oil storage site in Iberville Parish, which has capacity to store 76 million barrels of oil. 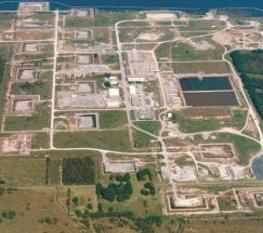 The West Hackberry Strategic Petroleum Reserve is a crude oil storage site in Cameron Parish, which has 21 different storage caverns with total capacity of 220.4 million barrels.

The Bayou Choctaw Strategic Petroleum Reserve is a crude oil storage site in Iberville Parish, which has capacity to store 76 million barrels of oil.

The West Hackberry Strategic Petroleum Reserve is a crude oil storage site in Cameron Parish, which has 21 different storage caverns with total capacity of 220.4 million barrels.

There are two large storage sites in Louisiana in Iberville and Cameron Parishes, with total capacity of 71 million and 220 million barrels of oil, respectively. The two other storage sites are in Texas near Freeport and Beaumont.

There was 635 million barrels of crude oil in the reserves as of March 13, with maximum storage capacity of 713 million barrels, according to the U.S. Department of Energy. The reserves could add about 225,000 barrels each day collectively.

The Trump administration seeks $3 billion from Congress to buy the oil for the emergency stash.

Roughly 300 publicly traded U.S. oil and gas exploration businesses with fewer than 5,000 employees would potentially be eligible to sell oil to the federal government for the reserve, according to a Bloomberg analysis.

But don't expect the purchase to shake up market prices. West Texas crude prices fell below $21 per barrel on Wednesday amid increased production by Saudi Arabia and Russia. They rebounded nearly 24% Thursday as traders likely bid up prices following published reports saying the U.S. may intervene in the oil price war.

"Presidents in the past have tried to use it (purchases for the reserve) to influence outcomes in the market, but there's not enough to do that," said David Dismukes, head of the LSU Center for Energy Studies. "If you look at what's left, 77 million barrels is only about six days supply of U.S. oil supply."

Some federal actions that could be more impactful for businesses would be creating more liquidity in the market or helping heavily leveraged oil and gas companies pay off debt, Dismukes said.

"Every major and independent oil producer is slashing budgets between 30% to 50%; everybody is in a state of complete shock and panic," he said.

The reserve is typically used to stave off effects from a potential crude oil supply disruption and was created at a time when the U.S. was a much bigger importer of oil than it is now. The oil reserves were tapped after Hurricane Katrina as a loan for refineries along the U.S. Gulf Coast when producers were getting operations back online after the storm.

Here’s a hot consumer tip from a national petroleum analyst: Don’t fill your tank for a bargain; pump prices may be lower tomorrow, too.