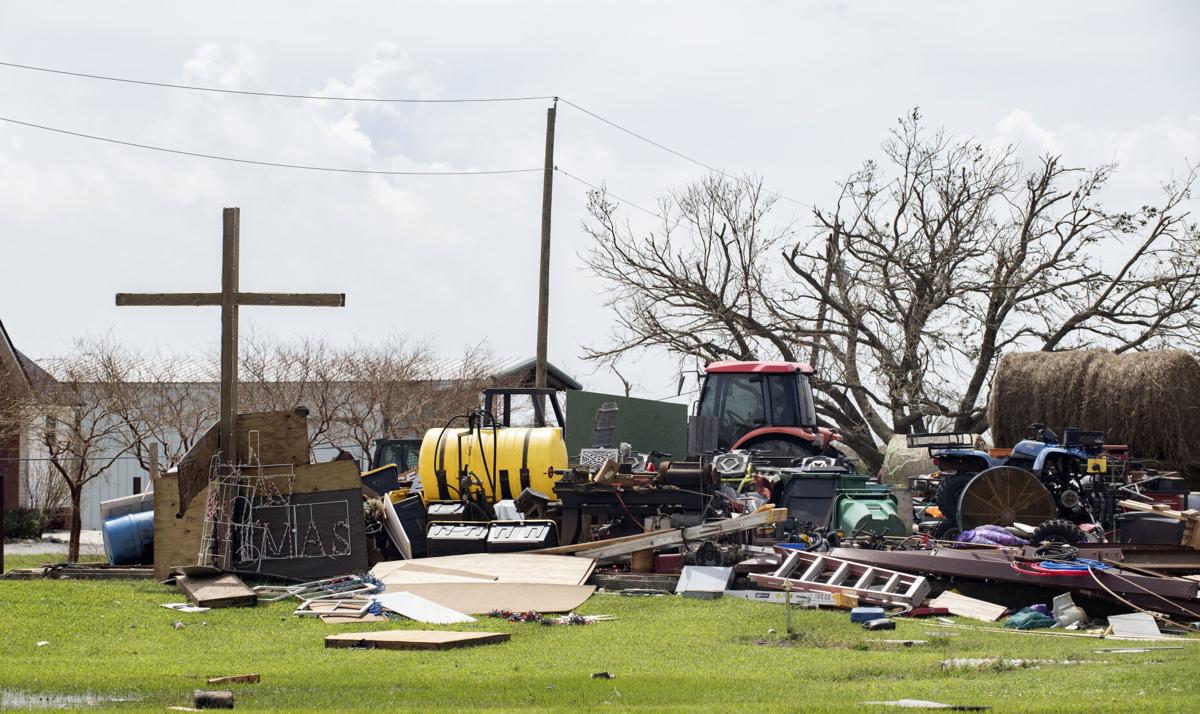 The contents of a farm storage building that was blown away during Hurricane Ida can be seen Monday, August 30, 2021, in Lafourche Parish.

During a flyover to survey damage after Hurricane Ida along the Mississippi River, a grain elevator was seen damaged.

The contents of a farm storage building that was blown away during Hurricane Ida can be seen Monday, August 30, 2021, in Lafourche Parish.

During a flyover to survey damage after Hurricane Ida along the Mississippi River, a grain elevator was seen damaged.

The Louisiana Department of Agriculture and Forestry did a flyover Thursday across parishes hard hit by the storm. Commissioner Mike Strain saw some stranded livestock and flooding in some orchards in Plaquemines Parish, but it's too early to estimate the total cost of damage.

"Most of the citrus orchards are sitting in water, and it's brackish water, which isn't good for orchards, so that's a concern," he said.

Rice fields were not damaged for the most part because it isn't near harvest time. It was not immediately clear how much livestock had died as a result of the storm. Greenhouses for commercial nurseries had the roofs blown off and a "significant" amount of timber was destroyed.

"The vegetable crops in and around Tangipahoa Parish are a real mess," he said. "We're just trying to stabilize things and minimize losses. Our dairy farmers have been operating on generators to milk cows."

The Mississippi River was largely closed for several days after the storm. Most of the river had reopened Thursday afternoon, except for a stretch near Bridge City in Jefferson Parish where there were power lines in the water.

"You're starting to get barges stacking up," said Ken Eriksen, senior vice president for agribusiness at IHS Markit, a market analyst. Barges are dropping off freights but can't get filled for export because there are no grain elevators operating on the lower Mississippi.

More than 95% of U.S. grain exports travel by barge down the Mississippi River to the U.S. Gulf Coast. About 60% of U.S. grain and soybean exports move through 10 export grain elevators in Louisiana before being shipped around the globe.

"Those elevators really impacts global trade and pricing of grains," Eriksen. "The river had been shut down and that one stretch is closed so the whole river is effectively closed. Most of them don't have any power yet."

It's estimated a badly damaged grain elevator in Reserve owned by Cargill may be down for weeks if not months, he said. The terminal is among the largest in the world and accounts for up to 15% of export volume from the U.S. Gulf Coast. Another Cargill facility in Westwego was also damaged.

Because of a lack of electricity and phone service, Cargill is just starting to assess the damage at the two facilities.

The LSU AgCenter estimated the biggest agricultural economic losses would be from downed timber and destroyed infrastructure such as buildings. Crops such as sugar cane, soybeans, citrus and vegetables took a hit.

“If you draw a line from Terrebonne Parish north to the Felicianas, everything east will see some damage,” said Kurt Guidry, LSU AgCenter region director and agricultural economist.

About 25% of the state's 500,000 acres of sugarcane were likely flattened by the hurricane, largely in Lafourche Parish. Sometimes damaged sugarcane can still be harvested but it was not immediately clear how much damage was done to the nearby sugar mills in Raceland and Thibodaux.

Upwards of 20% of the timberlands across Louisiana are estimated to be lost by the storm.

At St. Bernard Oyster Co., owner Ram Miller said he "got lucky" with some wind damage and flooding from storm surge.

The family was able to move much of its equipment before the storm but the roads have been closed so they've been unable to assess all the damage.

The facility had no power and Miller was installing generators Friday morning. Miller said he heard docks across St. Bernard Parish were without power and ice houses were damaged. He expects that will hamper shrimpers in the coming weeks.

It's likely the oyster beds are covered with mud, grass and other debris so the area will likely need to be dredged and cleaned so the oysters aren't smothered.

"It's going to take a little while but we got lucky compared to Grand Isle," he said.

After Katrina, Louisiana spent billions improving levees. After Ida, is the power grid next?