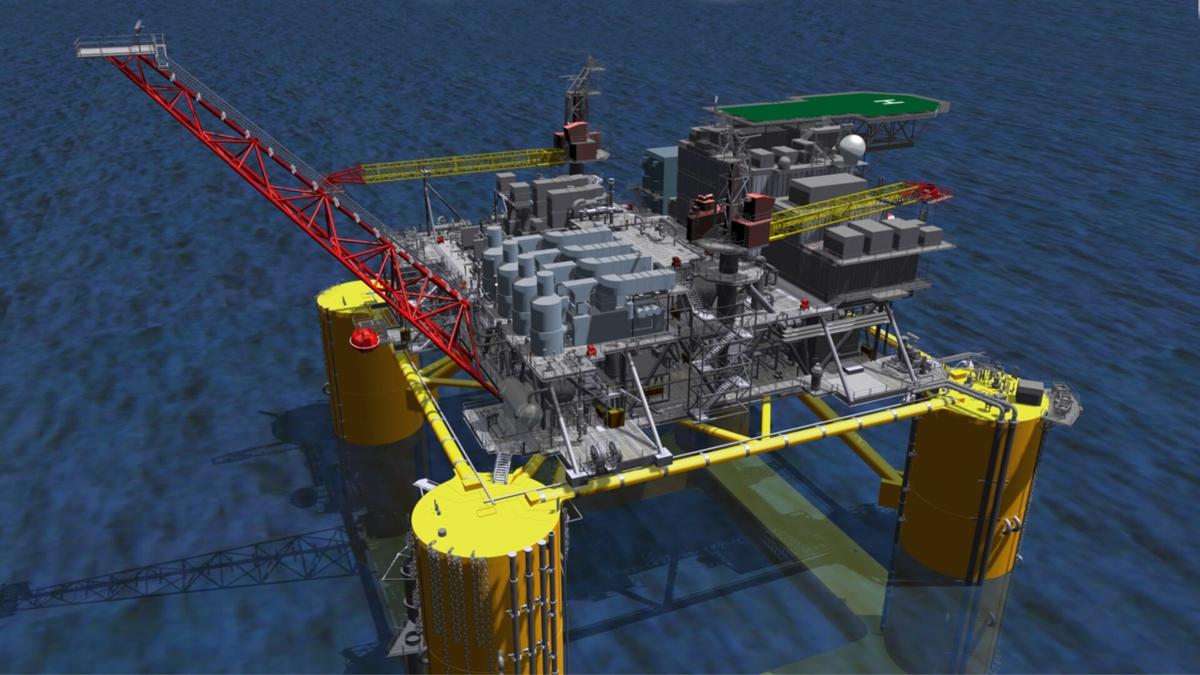 A graphic rendering of an oil platform for Vito field which sits 150 miles southeast of New Orleans. The next-generation oil platform is under construction. 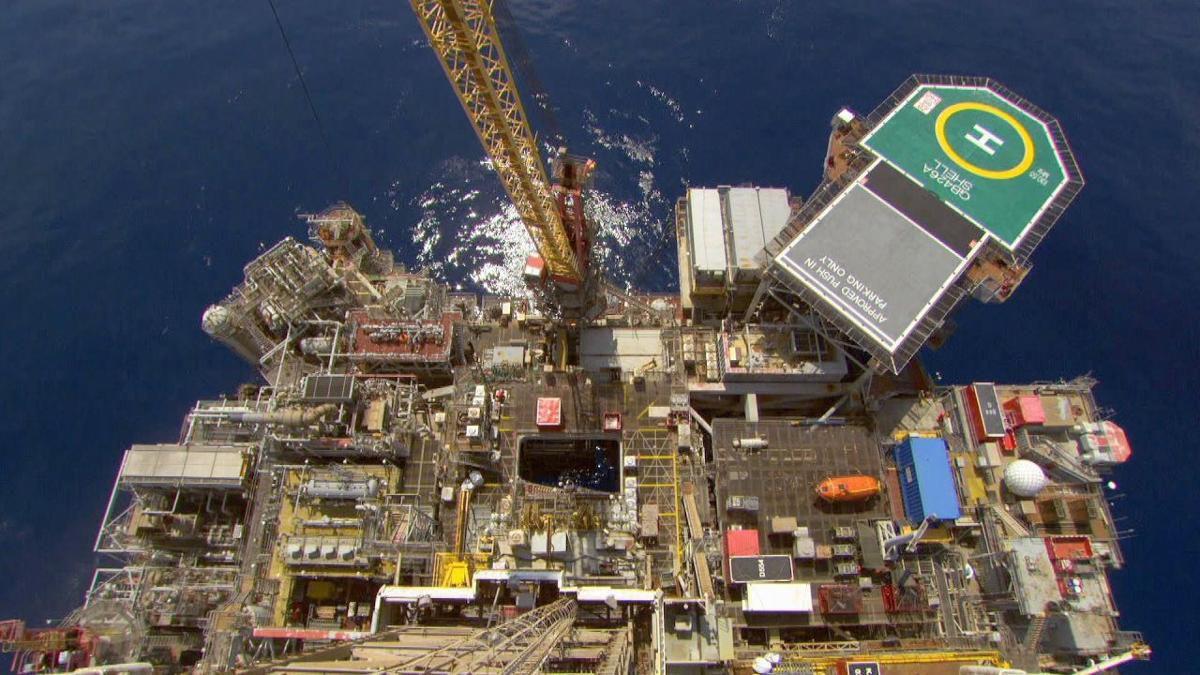 A graphic rendering of an oil platform for Vito field which sits 150 miles southeast of New Orleans. The next-generation oil platform is under construction.

Despite headwinds from corporate mandates to reduce carbon emissions, a temporarily halt for new federal leases in the Gulf of Mexico while the Biden administration reviews its impact on climate change and low oil prices, Royal Dutch Shell sees itself drilling for more oil off the coast of Louisiana and Texas.

"We still think that we'll be here for decades to come," said Rick Tallant, vice president Gulf of Mexico at Shell. "There's still a lot of running room in the Gulf of Mexico, the margins are very good for our investors and the greenhouse gas intensity is arguably the best in the industry."

In 2020, Shell drilled 137.7 million barrels of crude oil across the Gulf of Mexico as the most prolific operator in the deepwater oil fields, according to Bureau of Safety and Environmental Enforcement data. That's less than 147.3 million barrels the company produced in 2019 because global demand plummeted due to the pandemic-fueled economic recession.

But in general, the company has been producing more offshore oil each year, records show. In 2018, it drilled 122.3 million barrels.

Shell expects to continue investing in the Gulf of Mexico even though it recently decided to cut between 1% to 2% in global annual oil output as it plans to become carbon neutral by 2050.

"Most of it is going to be in U.S. waters we do have an exploration position in Mexico (federal waters) but that's still in the exploratory phase, we still have to find oil and gas there before we see any real capital investment," Tallant said.

In 2018, Shell bought nine of 19 Gulf of Mexico oil blocks in federal waters controlled by Mexico as part of the country's deregulation of the fossil fuel industry.

The edge for the Gulf of Mexico's future viability compared to Shell's global footprint is the existing infrastructure.

"We have everything combined," he said. “If you compare that to an offshore Brazil or offshore Nigeria where they don’t have that pipeline system or refinery system they have to continuously look for markets where to put that crude."

On the U.S. side, there are 140 workers who rotate flying out with helicopters to Shell's deepwater oil platform Appomattox, its newest with more automation and remote technology controls, which began production in May 2019. It's a different oil platform than the company's first, known as Auger which began producing oil in 1994, though there are still 192 individuals working on the platform as it was years ago. There are 1,600 workers supporting Shell's Gulf of Mexico operation.

For local companies, that means service contracts. In May 2020, Houma-based Danos was awarded a three-year contract with Shell to provide 144 workers as its oil and gas production workforce across its Gulf of Mexico portfolio including Appomattox and Auger. The company employs crane operators, control room and process operators, electricians, instrument technicians and logistics supervisors for Shell.

As for future jobs, the core skills of offshore production remain the same, but more digital skills are needed to run the next-generation oil platforms, Tallant said.

Shell, among others in the fossil fuel industry, argue that production offshore is less carbon-intensive because there are more restrictions around flaring and venting while the oil platforms run on natural gas as opposed to diesel generators.

The company doesn't see the Biden Administration's pause on federal leases as a big issue in the short-term.

“They want to get to net carbon zero by 2050 and that’s where we want to get to as well,” Tallant said. "We do have a good inventory of opportunities that we are going after under our current leases through the previous bid rounds, over the last 10 years. If we get multiple years down the road and there hasn’t been more lease sales then I do think that you’ll see probably reduced investment in the Gulf of Mexico."

In 2018, Shell decided to move forward on the Vito oil field, 150 miles southeast of New Orleans. It expected to be producing by 2021 but is now on a timeline for 2022. That new deepwater project could produce 100,000 barrels of oil per day and 300 million until it runs dry but it's still under construction. Vito was touted as an oil platform which could break even with oil prices under $35 per barrel.

After the Vito oil field begins producing oil next year Shell looks to spend $1 billion on operations over the next 25 years and support 2,000 jobs.

The next oil platform in Shell's portfolio may be in the Whale oil field, sitting 200 miles southwest of Houston, which had projected peak production of 100,000 barrels daily when it was discovered in 2018. The company expects to make a final investment decision on the field this year after delaying it last year as it sought to reduce expenses during the coronavirus pandemic. The next-generation oil platform in Whale will largely mirror its Vito oil field project.

Last year, Shell had stakes in 315 federal offshore leases in the U.S. Gulf of Mexico which accounted for 55% of the company's U.S. oil and gas production. Shell secured 19 more federal offshore leases in November 2020. Each day its share of oil production averaged 313,000 in 2020 down from 359,000 in 2019. It oversees 200 wells offshore which includes waterflood wells but also those which produce hydrocarbons such as oil and gas.

Environmental critics told the U.S. Department of Interior during a recent public meeting that the oil and gas industry was sitting on undeveloped federal leases and there's not demand in the market to continue developing by hosting new auctions. Shell pushed back on those claims.

"Not every lease has an oil field on it," he said. "A lot of investment has to go into first finding the oil fields."

BP Exploration & Production produced more crude oil than Shell in 2017, 118.5 million compared to 110.1 million respectively but Shell has typically produced the most crude oil since 2012. Before the Deepwater Horizon oil spill in 2010, BP produced significantly more than Shell, such as upward of 182 million barrels in 2009.

Acadiana Business Today: At least 4 Acadiana men were on capsized boat in Gulf of Mexico

Royal Dutch Shell, with major operations in the Gulf of Mexico, says it will trim its oil output by up to 2% annually as part of a long-term p…