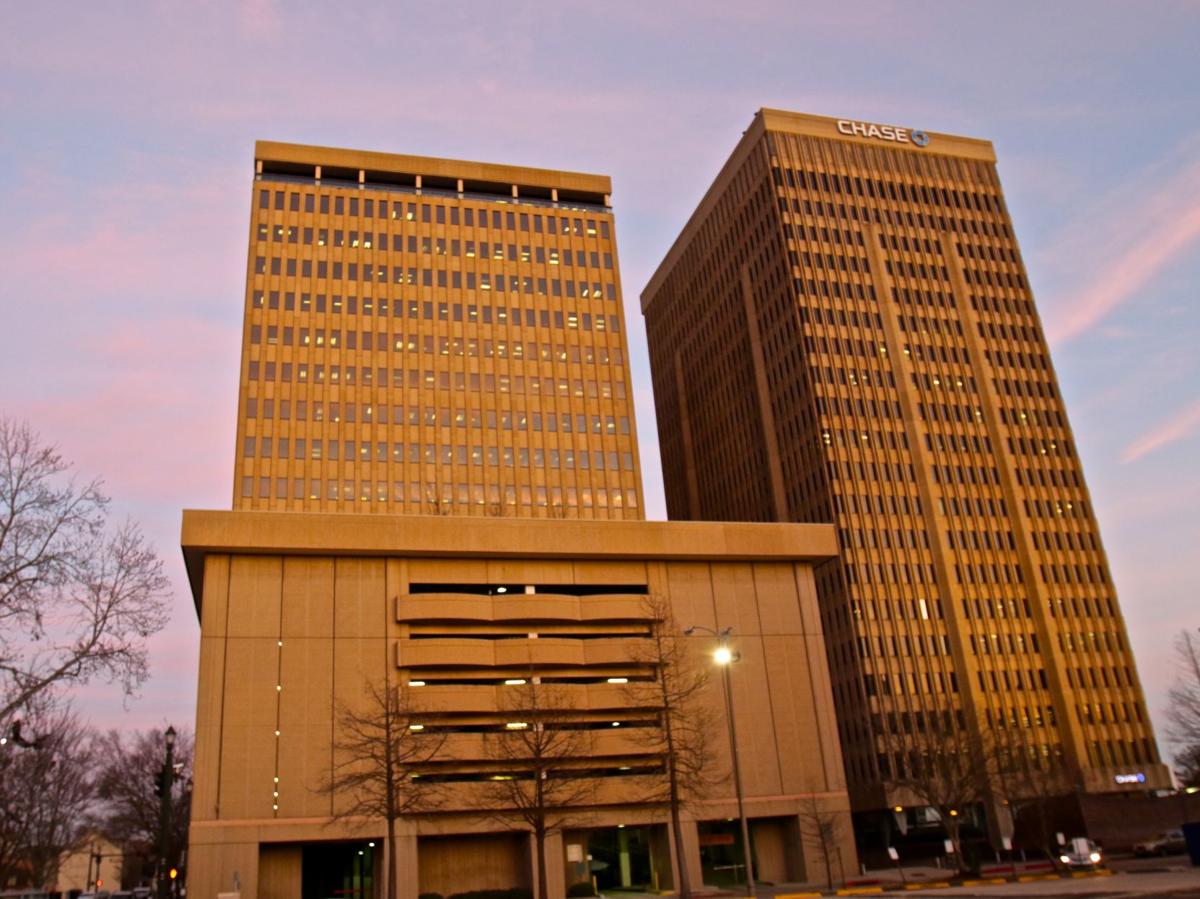 The Chase South Tower, right, in downtown Baton Rouge is being redeveloped into a mixed-use office, retail and residential property, with the top 10 floors being converted into up to 150 luxury apartments, by developer Mike Wampold. He acquired the south tower in February and already owned the adjoining Chase North Tower.

The Chase South Tower, right, in downtown Baton Rouge is being redeveloped into a mixed-use office, retail and residential property, with the top 10 floors being converted into up to 150 luxury apartments, by developer Mike Wampold. He acquired the south tower in February and already owned the adjoining Chase North Tower.

Baton Rouge developer Mike Wampold, who already owns four downtown properties, has purchased the troubled Chase South Tower, with plans for significant upgrades to convert it into a mixed-use property with retail, residential and office space.

La Hermana Mayor LLC, a company controlled by Wampold, purchased the building at 451 Florida St. in a deal that was filed Thursday evening with the East Baton Rouge Clerk of Court’s office. The seller was New York-based Florida Street Holdings LLC.

The exact sale price of the building was not disclosed. According to court documents, Wampold paid $10 “and other good and valuable considerations” for the building. Florida Street Holdings paid $26.9 million for the Chase South Tower in December 2007.

Wampold has owned the adjoining Chase North Tower since 2003, when he paid $19.7 million for the office building. While that 210,000-square-foot building is nearly 90 percent occupied, the 330,000-square-foot Chase South Tower has an occupancy rate of about 75 percent.

“Downtown has been good to us over the last 20 years,” Wampold said. “We’re looking for space to lease downtown and we feel confident we can bring the occupancy rate in the South Tower back into the 90s by repurposing and making it mixed use.”

Wampold plans to turn the South Tower's ground floor into retail, with restaurant space. Between 100 to 150 apartments will be put in the building; this could include high-end units that would go where the Camelot Club once was, Wampold said. The Camelot Club was a private club that topped the 21-story building until it closed in March 2016.

Camelot Club announces closing in downtown Baton Rouge: 'It is a sad day for all of us'

“We see the potential with the South Tower to have a whole complex that is very attractive to young professionals,” he said. A fitness center is being eyed for the building, along with a rooftop pool.

The plaza connecting the two buildings is an acre in size; Wampold said he wants to turn the brick area into a park-like green space with trees.

The Chase South Tower has been open since 1967. Some of its tenants include Chase Bank, Albemarle and the Public Affairs Research Council of Louisiana. The Baton Rouge Area Chamber and the Louisiana Association of Business and Industry have temporarily relocated into the property while they build new offices.

Albemarle has drastically reduced its presence in Baton Rouge and its lease on the property is up in 2021. Wampold said one of the motivations for the purchase of the building was to keep a significant amount of downtown office space from hitting the market all at once. “We want to be able to control that somewhat,” he said.

In 2016, the U.S. Bank National Association sought to foreclose on the building after it said Florida Street Holdings was in default on the $21.5 million loan it used to buy the Chase South Tower. That dispute was settled a few months later.

The building’s former owners held off on making needed maintenance to the Chase South Tower, Wampold said. He plans to spend “well into the seven figures” on upgrades and repairs to the building.

“We’re pretty aggressive about keeping our real estate in excellent condition,” he said.

Along with making needed repairs, Wampold plans to do a study of the downtown apartment market, to see the size and type of multifamily units that make the most sense. The plan is to have the first units up for lease sometime in 2019.

Even with the apartments and retail, Chase South still will have "a couple of hundred thousand square feet" of office space, he said.

Eighty percent of the tenants in downtown Baton Rouge are financial service or law firms, Wampold said. A renovated Chase South Tower, with ample parking and features that make it attractive to young professionals will be appealing to those sorts of businesses. Other potential tenants could be engineering firms or insurance companies.

“This is a bold statement for a local, nationally recognized developer,” Rhorer said. “When he makes a move like this, people take notice and there’s a spin-off effect.”

Up to 150 high-rise apartments will be added to downtown Baton Rouge with the redevelopment of the Chase South Tower, giving the central busin…