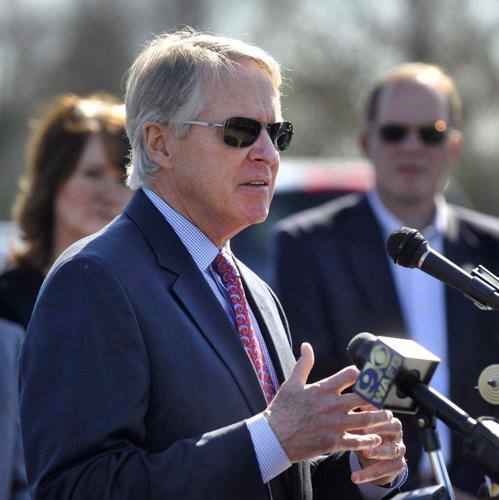 Advocate staff photo by TRAVIS SPRADLING -- Baton Rouge Area Foundation President and CEO John Davies speaks at the 2015 groundbreaking ceremony  for the Center For River Studies, part of The Water Campus. Davies is retiring at the end of the month after 33 years of leading the organization. 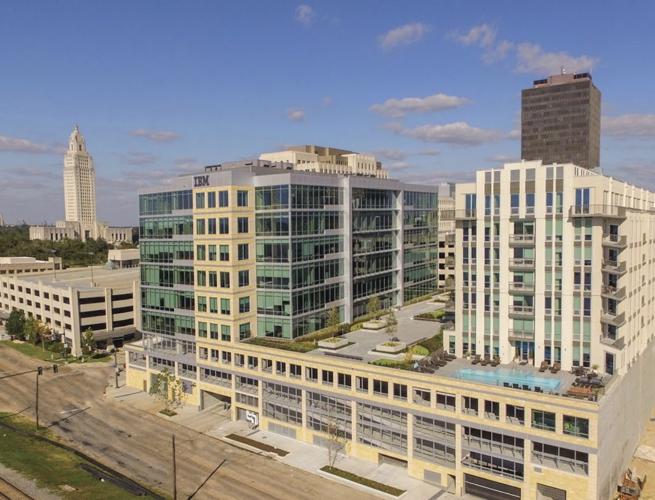 The Baton Rouge Area Foundation is located in the IBM Building at 100 North St. in downtown Baton Rouge. 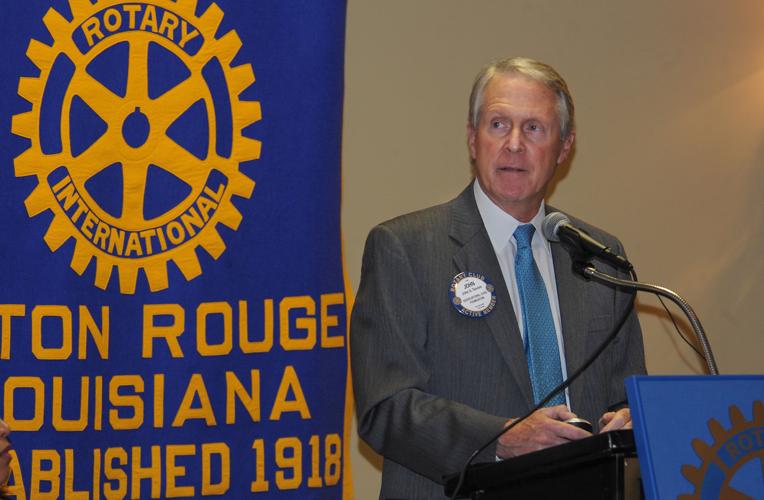 John Davies, head of the Baton Rouge Area Foundation, talks at a Rotary Club meeting. Davies is retiring at the end of this month after 33 years leading a philanthropic organization that has grown its coffers from $5 million to $722 million.

Advocate staff photo by TRAVIS SPRADLING -- Baton Rouge Area Foundation President and CEO John Davies speaks at the 2015 groundbreaking ceremony  for the Center For River Studies, part of The Water Campus. Davies is retiring at the end of the month after 33 years of leading the organization.

The Baton Rouge Area Foundation is located in the IBM Building at 100 North St. in downtown Baton Rouge.

John Davies, head of the Baton Rouge Area Foundation, talks at a Rotary Club meeting. Davies is retiring at the end of this month after 33 years leading a philanthropic organization that has grown its coffers from $5 million to $722 million.

John G. Davies, president and CEO of the Baton Rouge Area Foundation, is retiring at the end of this month after 33 years leading a philanthropic organization that has grown from $5 million to $722 million.

Davies will continue as chair of the Wilbur Marvin Foundation, a supporting nonprofit of BRAF. He will work with Commercial Properties Realty Trust to build out The Water Campus, a 35-acre research park south of downtown Baton Rouge where scientists and engineers work on ways to adapt to rising seas and vanishing wetlands. Commercial Properties manages and develops properties for the Wilbur Marvin Foundation. A share of earnings from the real estate are used by BRAF to make grants.

Davies, 71, answered questions about his experience at the organization during his tenure.

Why did you decide to retire now?

“There’s a time when you figure that you’ve done what you can do and it’s time to hand the reins over to new leadership. That was a decision my wife and I came to. It’s been a great ride; I’ve loved every minute of it. I think that the team here at the foundation did a good job in terms of pushing the envelope a little to make Baton Rouge a little bit a better place every year. It’s time for someone else to take over and maybe develop a fresh and different vision but to continue the advancement of our community regardless of how tacitly that might change from what we’ve done for the past 30 years or so.”

What was it like in the beginning of the Baton Rouge Area Foundation?

“In 1988 when I came, it was just when Louisiana was coming out of the oil and gas depression. I understand the employment in the state was worse than it had been in the Great Depression. So it was tough. And it was particularly tough for folks who lived in the margins. Over 50% unemployment, those are just numbers I recall off the top of my head. There was the immediate issue of how do you help accelerate what was starting to look like a recovery then, because the best thing you can do if you’re trying to advance the quality of life for everybody in the region, if you’re looking for social impact, is to be sure there’s a healthy economy which provides jobs that’s sustainable. Philanthropy is a gap filler. If you want a sustained benefit, really good paying jobs are important to all sort of things including social equity, so we looked at that. And we didn’t have any money at the foundation at that point, we had about $5 million dollars. We decided that there were things that we could do economically that might help accelerate the recovery and diversify the economic opportunities in our region.”

If you could pinpoint one accomplishment during your tenure that you’d like to be a legacy that people remember, what would you like to be remembered for?

“I think that during my time here, that we would take chances, and that we would take risks. Understanding that we couldn’t win every fight that we took on, or challenge that we took on. And then if we failed that we reported on it honestly and directly in our efforts. I believe that if you don’t fail you haven’t taken enough chances. And I think that institutionally that’s kind of embedded in the Baton Rouge Area Foundation and I’m really proud of that. That’s what we need to do for our community — is to try and push the envelope a bit to keep advancing our community in an appropriately progressive way. It’s not one thing that we did, it’s an attitude. That we’re willing to take risks and we’re willing to fail because we think our community demands that of us.”

Do you think the Baton Rouge Foundation always kept class and racial equity in mind?

“We did (equity centric work) before it was popular. That’s why we exist. It’s a very important filter and we do things and do them for the right reasons to advance the quality of life for everybody in our community. And that means if everybody doesn’t have an equal opportunity to live the American Dream, then we’re not gaining ground so that has to be the ultimate target. That’s all about being hyper sensitive to the social inequities in our community. And we’ve had that filter on since we got here. We just don’t go tout it and pound our chest and talk about what wonderful people we are. That's not who we are so you won’t find a us putting up position papers touting our virtuosity but we’d ask you to look at the work we did and then you make the decision. Is the fact that we’ve cut the jail population in half would that be something that’s ticked as a positive win in the area of equity? I think so, because these are mostly folks who can’t afford a $100 or $200 bail. We've moved that needle a lot."

What do you think is the biggest challenge Baton Rouge is going to face in the next five to 10 years?

"What is going to happen with the petrochemical industry here, I think it's a very curious question about how we manage that. All the social issues have been significant increase and distress across economic and racial lines. That's going to be something that needs to be addressed. I think political acrimony is a problem and we tend to be an honest broker. We did the Shaw Center years ago with Mike Foster and the city of Baton Rouge. So I think that has to continue perhaps at a more accelerated pace because I think the political atmosphere is getting increasingly more challenging and there needs to be these intermediary groups who can help rationalize good behavior and support it then follow through with projects that realize important benefits for our community. We are the major one that I know of who work on these public private partnerships. Those are some of the issues people will be dealing with. Then there's the whole issue that philanthropy changes a lot, those are macro issues the next leader will have to deal with. There's a big move to restrict donor advised funds. That has to be a robust conversation. It's going to be a challenging but very rewarding time for the next leader here."

Are you concerned about flooding?

"Flooding is a big deal. The Water Institute is one of the major organizations working with LSU on their inland flooding model to provide better data for us so we can make better decisions in advance of events and know when those events may hit. There are better models being developed in partnership with LSU and the Water Institute that provide more accurate modeling for the governor and GOSEP in anticipation and during times of disaster. Both in terms of response and the event itself, we're the leading nonprofit in the state. The reason we started the Water Institute was so we could defend Louisiana better, and they are doing amazing work. The weather has changed; climate change is real. And a lot of these highways that we ride on were not built anticipating the volumes of water and the subsidence and water rise on our coastal properties. We built for a different time and place but now things have changed we they can't accommodate the new reality. We need to learn how to build with water. How to catch and release water at the right now. To build communities that live with water, not fighting with it, but it is a retrofit. You've got to go in and reinvent a bunch of infrastructure we already have."

John G. Davies, president and CEO of the Baton Rouge Area Foundation, is retiring at the end of 2021 after 33 years leading a philanthropic or…