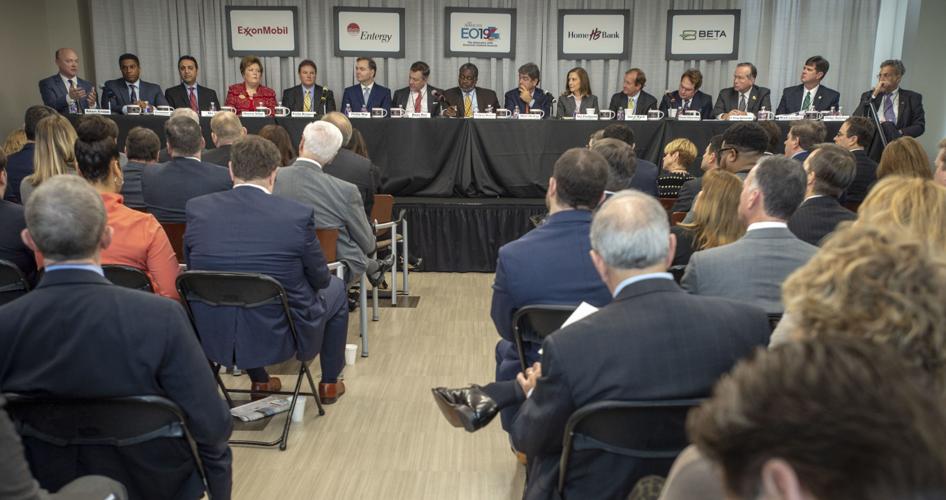 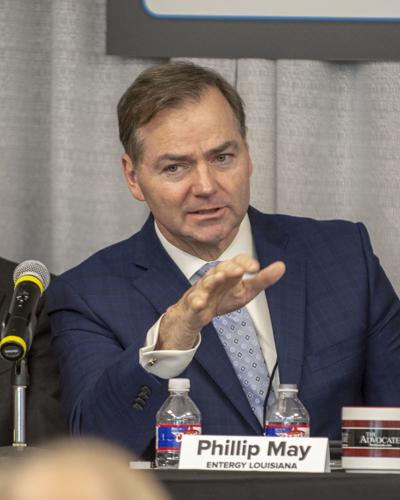 Phillip May, president and CEO of Entergy Louisiana, discusses the company and economic prospects for the state as a panelist at The Advocate's 2019 Economic Outlook Summit. Entergy also was one of the sponsors.

May said Louisiana is leading the way in terms of economic growth along the Gulf Coast. The state has the lowest electricity rates in the U.S. and highest foreign direct investment per capita in the U.S. 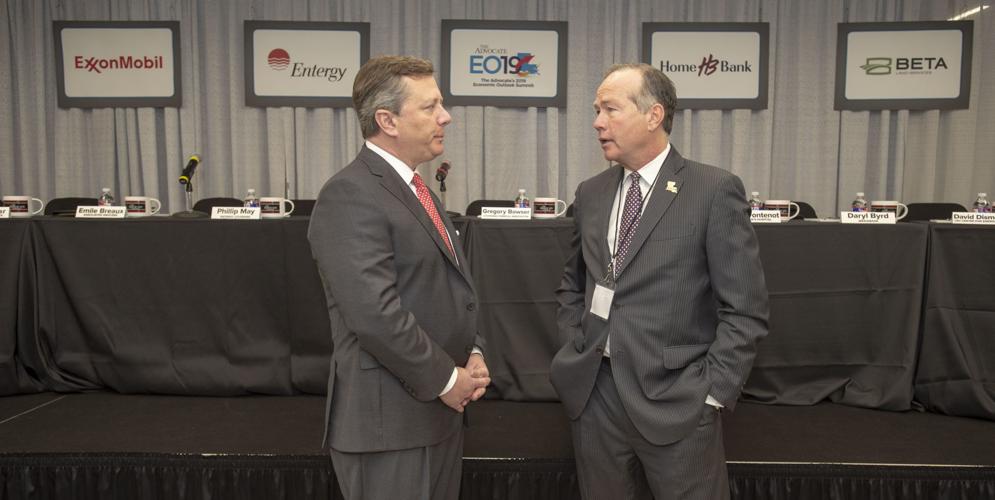 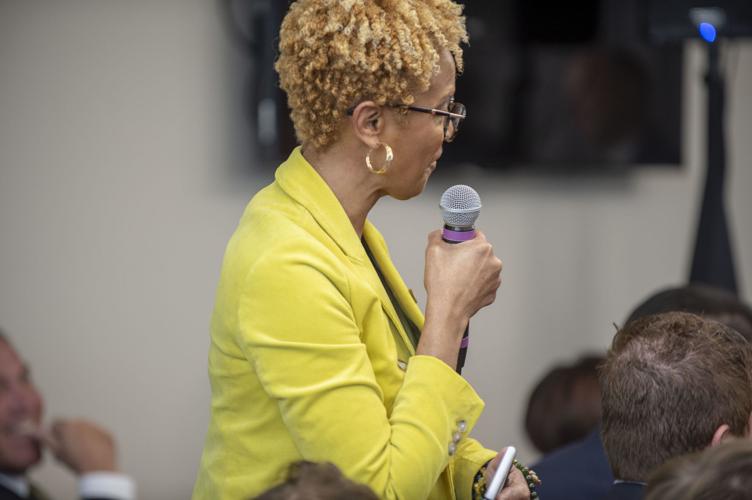 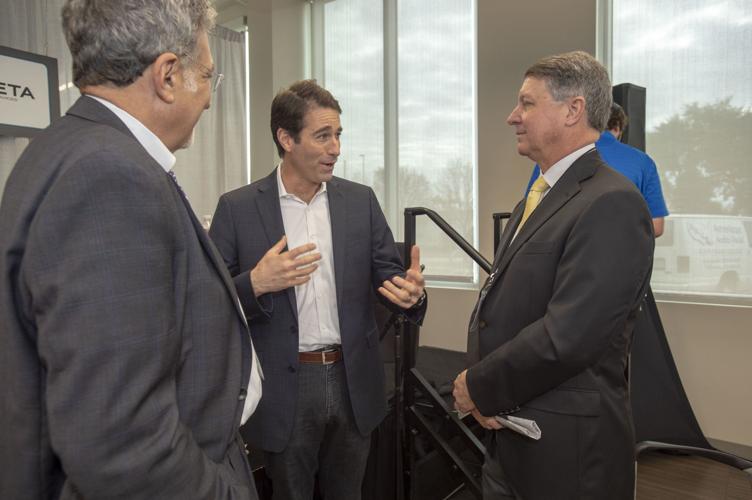 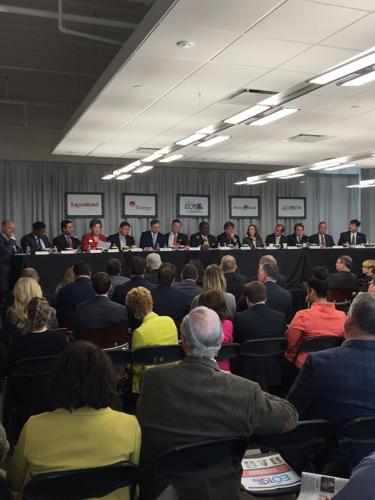 Fourteen executives and leaders in industry, real estate, tech, health care, higher education and other sectors gave mostly positive forecasts for their industries at the first annual Advocate Economic Outlook Summit, with some headwinds noted by the panelists.

Phillip May, president and CEO of Entergy Louisiana, discusses the company and economic prospects for the state as a panelist at The Advocate's 2019 Economic Outlook Summit. Entergy also was one of the sponsors.

May said Louisiana is leading the way in terms of economic growth along the Gulf Coast. The state has the lowest electricity rates in the U.S. and highest foreign direct investment per capita in the U.S.

Fourteen executives and leaders in industry, real estate, tech, health care, higher education and other sectors gave mostly positive forecasts for their industries at the first annual Advocate Economic Outlook Summit, with some headwinds noted by the panelists.

Despite headwinds like trade wars, a tight labor market and volatile commodity prices, Louisiana’s economy is poised to continue growing in 2019, representatives from a wide range of industries said Tuesday.

But the panel also laid out some problems that threaten to upend billions in investments and put a drain on the state’s economy.

Petrochemical and liquefied natural gas firms that thrive on low energy prices have about $90 billion in investments planned for Louisiana, said David Dismukes, head of LSU’s Center for Energy Studies. However, with oil prices plummeting in recent months, there could be more job losses in Louisiana’s oil patch this year. A trade war with China also is a significant worry in a state that relies heavily on trade.

Greg Bowser, president of the Louisiana Chemical Association, sharply criticized the changes to the state’s Industrial Tax Exemption Program, a lucrative and controversial tax break for manufacturers. Gov. John Bel Edwards reined in the program through an executive order and for the first time gave locals a say in the program, which exempts local property taxes.

Bowser said the state should return it to its original form. He said Edwards’ changes “took away Louisiana’s advantage to other states,” in part by eliminating a "one-stop" process at the state level and making applicants go through what he called time-consuming approvals before multiple local taxing bodies.

Teachers unions and Together Baton Rouge, a local advocacy group, have railed against the ITEP program, arguing the exemptions are mostly for projects that would happen regardless.

Lambert defended Edwards' move as bringing accountability to the program and said the governor is trying to balance competing interests.

Louisiana continues to experience the lowest electricity rates in the country, Entergy Louisiana CEO Phillip May said. That, along with low natural gas prices and other factors, will continue to drive a rush of industrial investments.

Entergy itself plans to spend about $4 billion in energy infrastructure in the coming years, including two new power plants.

Several business leaders lamented a workforce shortage in Louisiana, a problem that has been particularly acute in the technology sector. LSU President F. King Alexander said a stable budget in recent years has allowed the university to hire 280 faculty members and graduate more students.

Still, “stable funding doesn’t mean adequate funding,” Alexander said when asked what the governor should promote this year. He said the school is now at the same funding level as in 1991.

Aside from tech workers, Louisiana also has a severe lack of automotive technicians, said Matt McKay, president and CEO of All Star Automotive Group. Locally, the problem is being addressed in part by new training facilities like the Baton Rouge Community College auto training center at Ardendale.

For larger projects like a loop, though, Knapp said the state will have to change its tune dramatically and increase funding for road projects, something it hasn’t been willing to do thus far. Several panelists said the Baton Rouge area needs a new bridge across the Mississippi River.

IberiaBank, the largest financial institution headquartered in Louisiana, is feeling the effects of an “unhinged” stock market, said Daryl Byrd, president and CEO. The market has priced uncertainty into bank earnings, which have fallen sharply in recent months, he said. In the meantime, the bank must focus on taking care of its clients.

The effect of Amazon and other tech companies has rapidly changed the retail real estate market, said Beau Box, who runs a namesake real estate firm in Baton Rouge. The future of retail locally will be entertainment- and restaurant-focused users, he said. Vacant traditional retail space like at Cortana Mall should be repurposed for things like distribution hubs, health care tenants and education.

A baby boomer generation that is living longer, coupled with the Affordable Care Act and its Medicaid expansion, has extended health insurance to hundreds of thousands in Louisiana, said Teri Fontenot, president and CEO of Woman’s Hospital. That has helped fuel a construction boom that will bring two new hospitals online in Baton Rouge alone in 2019.

However, rising health care costs and poor health outcomes in Louisiana also cost employers, through high premiums, and diverts state and federal government services from critical programs, she said. Prevention is key to improving health and reining in rising costs, she said.

In the residential real estate market, home prices are rising locally and inventory is set to improve in 2019, said Donna Villar, owner/broker of Villar & Co. Real Estate, but wage growth hasn’t kept up with home prices, she said. That has caused an “affordability crux” that will remain a problem in 2019.

While Baton Rouge has seen billions in investment over the past decade, the region’s development is increasingly unequal, said Chris Tyson, head of the East Baton Rouge Redevelopment Authority. He hopes to help bring investments to north Baton Rouge by focusing on affordable housing and transportation, through a bus rapid transit line and transit-focused development on Plank Road.

E-commerce has even affected industries like the grocery business. Emile Breaux, president and CEO of Associated Grocers, said he hasn’t figured out how to make money at it yet, but “it’s coming.”

Rising costs from transportation regulations and labor shortages are being priced into food products at the consumer level, he added.

In the 1990s, when the internet boom was causing a rush of economic activity throughout the country, Louisiana was missing out, said Mo Vij, General Informatics president and CEO. Now, the state’s technology sector is poised to capitalize on a new wave of tech investment as the industry becomes increasingly “democratized.”

“We’re in a better place than we were 20 years ago,” Vij said. “In the 1990s, when the internet was happening, we kind of got left behind. … We have the same opportunity again. We’re better placed.”

Louisiana economy well-positioned in 2019, but faces several of these headwinds

Despite headwinds like trade wars, a tight labor market and volatile commodity prices, Louisiana’s economy is poised to continue growing in 20…

Unbeknownst to me on both occasions it occurred, but Hank Williams and I indirectly crossed paths in one of those metaphysical sort of ways.

'You can't email somebody a cheeseburger': Notable quotes, facts about Louisiana's 2019 economic outlook

Baton Rouge-area business leaders gathered at The Advocate on Tuesday to discuss Louisiana's economic outlook for 2019. Here are a few notable…